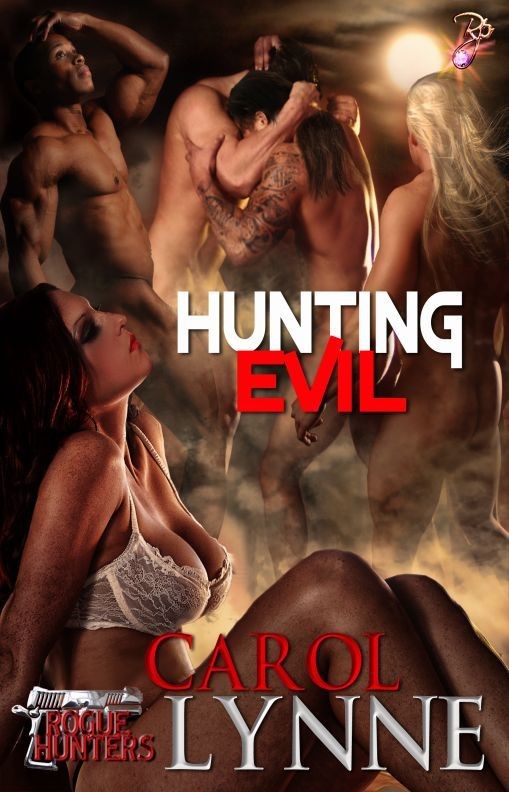 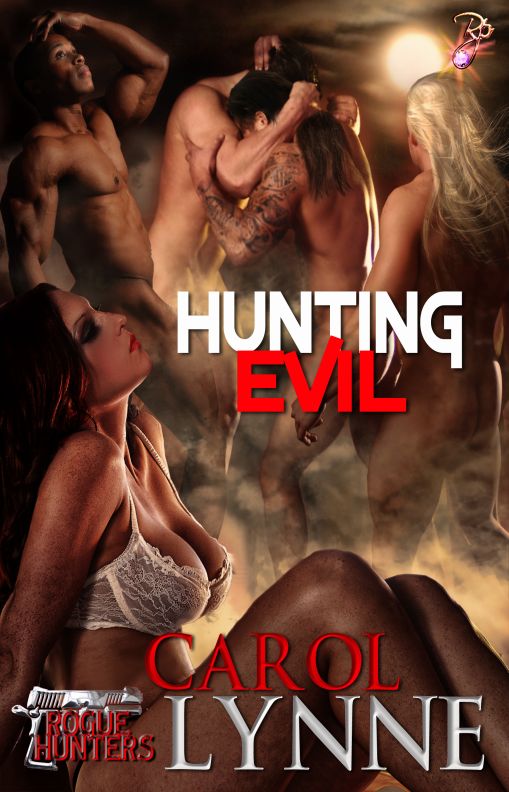 Warning: All rights reserved. The unauthorized reproduction or distribution of this copyrighted work is illegal. Criminal copyright infringement, including infringement without monetary gain, is investigated by the FBI and is punishable by up to 5 years in federal prison and a fine of $250,000.

“No.” Vince Milano shook his head.

“Sorry, Vince, but you don’t have a choice. This woman’s supposed to be some kind of expert on Armand. The order came down from the Commissioner.”

“What does the San Diego Commissioner know about the case? He watches the local news and assumes it will be safe for a woman to ride along while I hunt this monster? Does he have any idea what this guy does to females?” Vince crossed his arms over his chest and slung his heavy black boots onto his captain’s desk.

Dave Bently narrowed his eyes at the positioning of Vince’s footwear. With a sigh, Vince put his feet back on the floor.

“Look, Vince. When your kind became known, most of the cops in the city refused to work with their fellow vampire officers. Shit, some of them had been partners for years, but the second they found out who they were riding with, everything changed. The reason you and every other vamp still have jobs is because of Kade Black and the Bureau of Vampire Affairs. Kade is the one who went to the Commissioner and asked that Ms. Davis help with the case.”

Vince knew what Kade Black, the vamp in charge of the BVA’s military, had done for his kind. What he didn’t understand was how his captain could think it was a good thing to bring in an outsider. “I’m hot on Armand’s trail. How am I supposed to babysit and track that maniac at the same time?”

“I told them that, and they assured me they were sending someone who could keep up with you.”

“Sorry, but you don’t have a choice.”

“I always have a choice,” Vince replied and headed for the door.

His captain’s next words stopped him in his tracks. “They’ll yank you from the case and put you on leave until they either fire your ass or you agree to the ride-along. Who else do you think we have who can catch Armand?”

Gripping the cold brass doorknob, Vince felt the metal start to give way under his superior strength. Easing up, he looked over his shoulder at Bently. “I’m leaving in twenty. If the chick isn’t in the car, too bad.”

Walking toward his desk, Vince unlocked his top drawer and removed the well-worn folder that had become his constant companion. He thumbed through the file of pictures that had been his waking nightmare for the past eight months. It never got easier. He was so close to catching the psycho he could taste it. A quick glance at the clock on the yellowing precinct wall told him he’d been lost in the evidence once again. Shit, the woman would show up any minute. Being a vampire wasn’t the only reason he worked nights. He preferred the solitude the dark afforded him, and riding around with some damn woman in tow wasn’t his idea of a good time.

Vince turned to study the red-haired beauty in front of him.
Nice rack
. His mind recognized her outstretched hand and the reality of the situation came into focus.
BVA
, he thought with a sigh at what may have been.

“Call me Vince.” He gave the woman a short nod and turned to gather his file. “Ready?” He stood and gestured to the door.

Vince shrugged and led the way to his unmarked car. She didn’t smell right, but he couldn’t pinpoint what it was. He didn’t need this headache right now. At least, the woman had enough sense to wear jeans instead of a skirt. Speaking of jeans, his were fitting a little tighter in the crotch as he felt his companion’s presence behind him.

The fact that Milano opened her car door told Lauren more than words could. Although it was a courteous thing to do, it put her in the weaker position, something she didn’t appreciate. Not one bit. She shoved passed him and took control of the door. “I’m perfectly capable of opening a door.”

Milano took a step back and held up his hand. “Just trying to be a gentleman.”

“Be a cop. Leave the gentleman shit for date night.” She dropped her bag on the floor and climbed in. There was only one place she wanted to be treated like a woman, and that was in bed. She glanced at Milano as he buckled his seatbelt.
Damn.
Milano’s body was perfect. His forearms were bigger than her thighs and the bulge in his jeans was impressive.

Milano cleared his throat, and Lauren realized she was openly staring at his crotch. Without apologizing, she turned to face the front. “Where to first?”

“Well, since the BVA believes you can crack this case, I thought I’d take you to one of the crime scenes.” Milano started the sedan and pulled out of the lot.

Lauren had already poured over all the crime scenes, but she kept her mouth shut. It would be interesting to see what Milano had discovered on his own. “Okay,” she agreed.

They headed toward Locust and Fifth with Milano driving like an old woman. He was wasting her time, she concluded. Why was he taking her to the only location that didn’t fit with Armand’s usual pattern? “So tell me, how did you figure out Armand was the one killing these girls?”

“I could ask you the same thing,” Milano said without taking his eyes off the road.

Lauren wasn’t ready to divulge that information. “I’ve been tracking him for a long time.”

“So have I.” Milano parked in front of the alley where Brandy Huggins’ body had been found.

“This is it.” Milano got out of the car without looking at her.

With a sigh, Lauren got out. The section of town wasn’t the safest, so she grabbed her bag at the last moment.

With his hands shoved in his pockets, Milano stared at the bag and grinned.

“It’s not a purse.” She settled the mini-backpack on her shoulders.

“Of course not. That would make you a woman.”

Lauren’s gaze went to the front of Milano’s pants. “I thought you’d noticed that little fact earlier when your dick went hard, but maybe you prefer dudes.”

Milano’s dark eyes narrowed. He moved to stand in front of Lauren. “I smelled your wet pussy when we got in the car. I’m a vampire. We react to things like that.”

Lauren’s sex drive was the only thing about her that she couldn’t control, and she never made apologies for it. She smirked. “You’ve got a great body. Someone would have to be dead not to notice.” Standing on her tip toes, she tilted her head back and came within an inch of his mouth. “Did you bring me here to seduce me or show me the crime scene?”

Milano’s nostrils flared, obviously trying to detect whether she was aroused again. “I brought you here to see how much you know about the man we’re tracking.”

“I know everything about Armand, except where’s he hiding.” Lauren glanced at the grimy alley. “And I know that Brandy Huggins wasn’t murdered here.”

Milano’s black eyebrows shot up. “Why do you say that?”

“Because it’s dirty here.” With her hands clasped behind her back, Lauren wandered up and down a short stretch of the alley. “I think she was killed too close to where he’s living, and he didn’t want to draw police attention to his location.”

“Well, you’re right that she wasn’t killed here, not enough blood at this scene.”

“So tell me, how did you find out it was Armand?”

“He’s never tried to hide his identity.” He opened his jacket and withdrew a small plastic bag from his inner pocket. “He leaves these stuffed in various parts of the victims’ bodies.”

Lauren took the bag and stared at the bloodstained business card. “Armand obviously wanted the media to know he was doing it, so why hold that information back from the press? Do you worry that he continues to kill because you’re pissing him off by holding back?”

Milano shook his head. “I think the bastard would continue to track these girls down regardless.” He looked at Lauren with suspicion in his eyes. “Don’t you?”

Lauren shrugged. Armand was trying to get her attention, so, no, she didn’t believe he would have continued, but she didn’t want to give Milano a reason to feel guilty for anything Armand had done. It was unlike her to care so much about a man’s feelings, which made her uneasy. She headed back toward the car. “Where to next?”

An hour before sunrise, Vince followed Lauren’s directions to her car in the parking lot. He’d purposely followed leads he knew wouldn’t go anywhere in an attempt to keep the woman out of the investigation. “If I get a new lead, I’ll be sure and let the BVA know. In the meantime, there’s no sense wasting your time.”

Face red and jaw set, Lauren jabbed her finger at Vince’s chest. “Last night was bullshit, and we both know it. I don’t know what kind of stick you’ve got shoved up your ass, but I can make things very difficult for you if you’re not careful.”

“I will not put a civilian in danger, no matter how much power she believes she wields.” Vince admired the human. Few people stood up to him, and never had a woman tried to challenge him. His attraction to the red-haired beauty grew, threatening his self-control. The smell of her arousal in the closed confines of the car had plagued him all night. There was a spicy scent to her cream that he’d never encountered before, and his desire to taste her juices had occupied most of his thoughts.

Lauren’s emerald green eyes narrowed. “Your job is to worry about the innocent girls being murdered. I’ll be back at sunset to help you catch the bastard.”

Before Vince could protest further, Lauren was out of the car and stalking toward her own. His gaze settled on her ass and stayed there until she climbed behind the wheel and tore out of the lot.

Putting his car in gear, he pulled out with thoughts of getting the she-devil into bed. He wondered if she was as aggressive in the sack as she had been with him a few moments earlier. The thought made his cock swell.

On his way home, Vince swung by Morgan’s, a sleazy little hole in the wall where he’d always gotten laid or blown for the price of a drink or two.

Walking into the place, Vince tossed his keys onto the scarred wooden surface of the bar. He didn’t bother sitting down, with any luck, he wouldn’t be there long enough. “Beer,” he told Mac, the bartender.

“Haven’t seen you in a while.” Mac reached into the cooler and pulled out a Michelob.

The Cure by Douglas E. Richards
Rogue (In the life of the Rogue Book 1) by KaNeshia Michelle
Master of Swords by Angela Knight
Seduction by Madame B
Ecstasy by Leigh, Lora
Bought His Life by Tia Fanning, Aleka Nakis
Baby Comes First by Beverly Farr
Hitler's Terror Weapons by Brooks, Geoffrey
Fringe-ology by Steve Volk
After the Rain (The Callahans) by Hayden, Jennifer