Ayin couldn't sleep. She sat next to Tzi in their tent, finger-combing his hair. In her rush to return to him, she hadn't wasted time on thought.

She had plenty of time now.

Prince -- now Lord -- Kaloomte had tried to stop Lord Yuknoom from using the soul of the temple on her. He'd left Pitz here to take care of Tzi. Wouldn't that have brought trouble, if Lord Yuknoom returned alive?

Ayin slipped out of her tent and approached Lord Kaloomte's. The guards asked his permission, then let her enter.

Lord Kaloomte's expression was mild, not unfriendly. Ayin bit her lip and seated herself on one of the cushions. "You knew. You knew what kind of place the temple was, before we arrived."

"My library is as extensive as everyone says. Mention of the temple is rare, but I had enough information to hope it would rid Kab of my brother."

She felt cold, hollow inside. "Murderer."

"You're brave, to confront a murderer alone." Even now, his tone was kind. He leaned back and folded his hands over his chest. "My father died a year ago. You know that, yes?"

"Someone burned down his pavilion and staged the scene to look like my father died under a collapsing beam. No such mistake could be made if one saw the knife wounds in his body. And, if one saw the smugness on Yuknoom's face, no one could deny he did it.

"Yuknoom's favorite clothes disappeared afterwards, surely stained with blood. I enlisted a trusted, talented magician and tried to use those postholes to kill Yuknoom in turn. But one murder didn't leave a strong enough memory in the building's soul."

"It took his arm instead," Ayin whispered.

Lord Kaloomte nodded. "He became paranoid, suspicious. I couldn't act directly without risking my head. But if I could find someone who knew where the Xook temple was . . . in any case, I'm sorry my plots endangered your family."

"You're not telling me this because you're sorry," Ayin said, shoulders stiff, legs ready to run.

"Ayin, the past five rulers gained the lordship through bloodshed. I have three children. If I don't stop this legacy of death, they're either going to kill me or kill each other."

Ayin peered at him. "You think I can help?"

"Yes." He leaned forward, fingers laced together. "How does the temple's posthole
work?
"

"I . . . I don't know," Ayin faltered. "Maybe it healed me because I've never killed anyone. Or maybe because I'd just tried to save someone's life."

He nodded, thoughtful. "I tried to save your life and your son's. That should be enough. I'm going to institute a healing at the Xook temple as part of the official coronation ceremony. Then no man can earn the throne by murder."

Ayin gaped. "You can't mean to do this! You killed your brother!"

"I brought him to judgment. I think the Xook would approve. I'll return with my court after burying him. If I fail, my oldest son will face the posthole and sit in the lordship, instead. Xook law held all children guiltless. You weren't judged against as a child."

"You'd risk your life? Your son's life?" Her mouth tasted like chalk.

Lord Kaloomte smiled sadly. "This nation has been ruled by killers for too long. I'd risk nearly anything to never see murder in my children's eyes."

"Most children manage to avoid patricide!"

"You don't understand how corrupting power can be."

Ayin shook her head. "So you'd keep and use the immense power of the temple."

As if guards were infallible. "My grandmother told me the temple was best left alone. She knew more about it than either of us."

"A Xook woman advises against magic. Why do I find that unsurprising?"

If he'd seen Grandmother's face, he'd understand she'd given no idle warning. "That temple saw more executions than pardons. What happens when it runs out of healing?" She had no words for the knot of dread growing in her chest. "Nothing good will come of your plan."

Lord Kaloomte leaned his head to the side, considering her. "I want to offer you a position among my scholars."

Ayin blinked. Had he not heard her?

"You'd have rooms in the palace, or nearby, if you prefer. You'd be paid well. My brother offered you a reward; I can think of nothing better."

"The temple should be destroyed. If I joined your scholars, I'd spend all my research trying to convince you."

Ayin bit her lip. This man wasn't like his brother. He'd listen. He might even relent. "If you kill yourself with this new coronation, I want a written reassurance I won't lose my position."

He laughed. "You're blunt. Yes, I can arrange that."

When she entered her tent, Tzi stirred. "M-mother?"

"I'm here." She found his hand in the darkness. "How are you feeling?"

"The burning's starting to go down."

She stroked his cheek. Still warm, but not dangerously so. "If you want, I can pay for a magician when we return to the city. You'd be better at once."

Tzi stilled. His voice dropped to a whisper. "You just robbed Lord Kaloomte, didn't you? Did you grab feathers or jade?"

Ayin laughed until her lungs hurt. 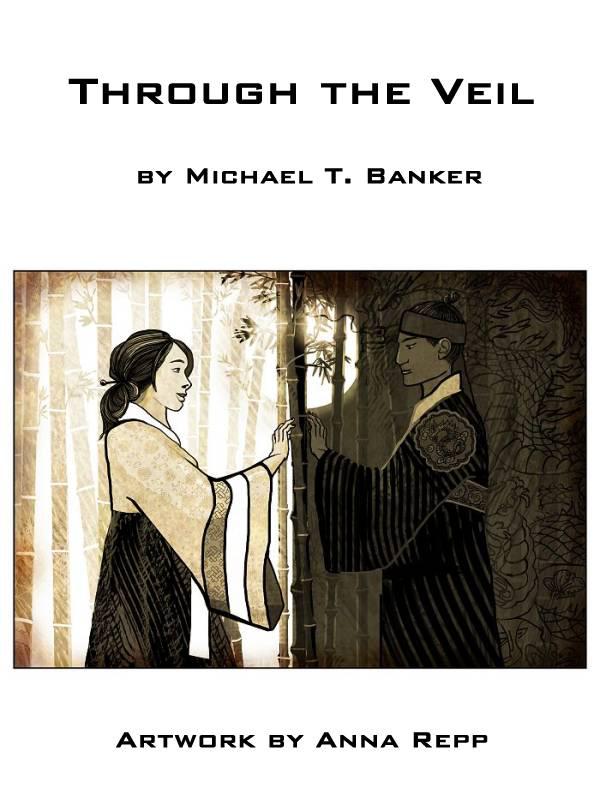 Every year in Korea spring felt like an accident, a stutter-breath in nature's rhythm. Between the winter gods blowing dry frigid air down from the mountains and the summer gods fanning sweltering currents off the southern seas, for a brief period the land was still. Spring was when the greater gods rested and the mischievous spirits played.

Ori was not fooled by the tranquility of the season. When the spirits jested, it was humans who came to harm. When the spirits crossed through the veil that separated their worlds to touch them directly, sometimes people took ill, called it spirit sickness.

So it was for Ori's betrothed.

They walked alone, the two of them. Helplessly Ori watched her waver between the bamboo walling them to their left and the muddy rice paddy to their right. Her breath came in sharp gasps and her bare feet slapped the grass irregularly.

Always Ori reached for her, then hesitated. What comfort was he, who didn't even know her? They had met for the very first time at their betrothal ceremony, two days ago. He had bowed formally once and she twice, but on the second time she failed to rise; she arched her back and kicked out her feet and screamed like a woman in labor. That was when a cluster of blue-winged butterflies converged on her exposed skin -- her face, her hands, and her ankles. Ori saw it clearly, just for a moment, before they fluttered off in a shimmering cloud toward the west. It was a sure sign, she was spirit-touched.

Her own family cast her out; spirit sickness was unlucky at best and believed to be catching. Ori didn't know her yet, but she was his responsibility now. That's what he told himself as together they threw themselves upon the mercy of the gods and hoped for a revelation. Until then, they followed the butterflies.

They would spend the rest of their lives together, be it seven decades or seven days.

"Hot," panted his betrothed -- and then she folded to the ground. "Too hot," she breathed, holding her forehead. Her yellow and red ceremonial dress pooled around her like fire. She was very young, more like a little sister than a soon-to-be wife. Ori was uncertain how to behave around her. He fumbled for the water gourd, but she sucked in air through her teeth and lunged for the rice paddy instead. Scooping up fistfuls of mud, she smeared it all over her forehead and cheeks, dripping globs onto her dress.

She sighed contentedly. "Did you know that bamboo is a living instrument?" Her head weaved from side to side and her eyes held the same uncanny depth as Ori's mother's eyes just before she succumbed to fever. "I used to tap, tap, tap. Tap on fat and thin bamboo. Then I'd hum to the spirits, just like . . ." She hummed a tremulous note and smiled. "I'd like to die in the bamboo, if possible."

She stood up, still smiling, and took two steps toward the bamboo before her knees failed her. Ori caught her and sank with her, his blue and purple gown drifting against her red and yellow. Her eyes were closed, but her breath was smooth and untroubled.

Ori scooped her slight form in his arms and plunged into the bamboo forest as she had requested. He had no thoughts left. What was thought, anyway? The whisperings of the gods into their ears? Whenever Ori found a rhythm to his life, the earth seemed to open up beneath his feet. Whenever he carved out a purpose, the rest of the world shifted, rendering it meaningless. His sister was murdered at the hands of the Japanese. His father conscripted into the army, never to return. His mother perished of fever, perhaps touched by the spirits herself. At least the bamboo formed a comfortable green blanket surrounding him. One step looked the same as the next; either his feet carried him or he stood in place while the bamboo flowed around him.

Ori came to a halt as two hands stuck out between stalks of bamboo, beckoning to him.

Ori glimpsed white hair and thin lips, rheumy eyes set in deep sockets. A goddess, he wondered? He bent as if bowing and tenderly set his betrothed on the soil. He had spent his endurance long ago, but had merely lacked the presence of mind to collapse.

"Pick her up," commanded the woman a moment later. He jerked forward to comply, but a girl emerged from the bamboo and grabbed his betrothed away from him.

The girl looked around at him, asked, "Mistress, him too?" But the old woman waved a dismissive hand at Ori.

They carried his betrothed away, the girl holding the legs and the old woman the arms, while the hem of the red and yellow dress dragged across the brush between them. Ori followed, disbelieving, not knowing what he would do anymore even if they returned her to him. They lead him down a hill where the bamboo dwindled and then failed. The young girl kept looking back at him, until they finally disappeared into a Buddhist temple.

The old woman challenged him at the doorway: "What is her name?"

"She . . . It hasn't . . ." Hasn't been decided yet, he wanted to say, for a new name would be selected upon marriage. As her future husband, it felt improper to use her childhood name. "Jwi," he admitted. Mouse. A humble name intended to avoid the gods' notice, just as his own name meant "duck."

"Better off not to watch," warned the woman, but she didn't prevent him from slipping off his shoes and entering behind her.

Inside, the temple was utterly empty. Only wooden floors worn smooth by the shuffling feet of countless monks, long gone.