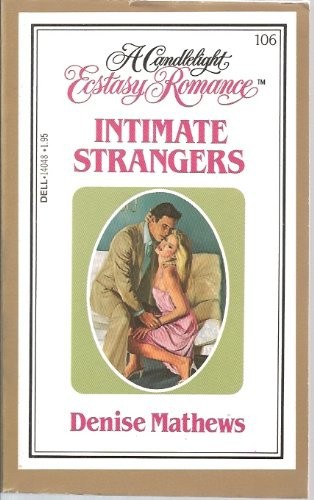 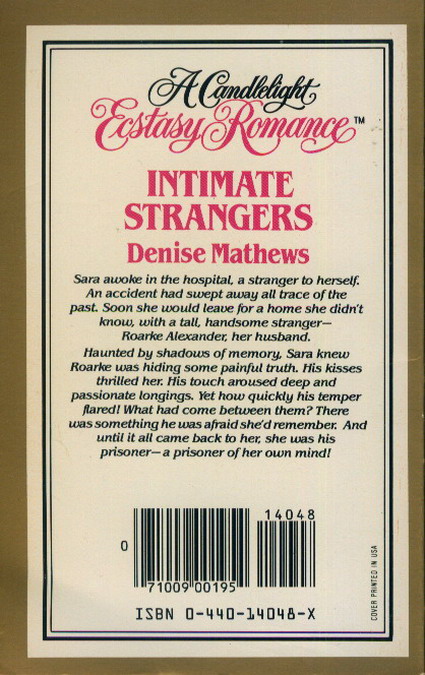 LET ME SHOW YOU HOW I FEEL."

Sara slid her arms around his waist, lured by his words. Roarke pulled her still more tightly against him. Bringing his face close to hers, he placed soft, lingering kisses on her cheeks, and Sara could feel her face grow warm wherever his lips touched her skin. Then his mouth tenderly sought hers. His kiss was gentle at first but soon grew demanding. Clinging to him in a passionate embrace, Sara was surprised to find herself responding with equal fervor.

We have been delighted with your enthusiastic response to Candlelight Ecstasy Romances™, and we thank you for the interest you have shown in this exciting series.

In the upcoming months we will continue to present the distinctive sensuous love stories you have come to expect only from Ecstasy. We look forward to bringing you many more books from your favorite authors and also the very finest work from new authors of contemporary romantic fiction.

As always, we are striving to present the unique, absorbing love stories that you enjoy most—books that are more than ordinary romance.

Your suggestions and comments are always welcome. Please write to us at the address below.

A brilliant, hot white glare made the pain in her head increase to an unbearable degree. The throbbing became an agony of exquisite proportions and she groaned, closing her eyes tightly against the luminous torture. A wave of alarm swelled through her body, followed by the sensation of overwhelming terror. She heard that same sound again and was dimly aware it was coming from her. She was moaning, moaning from pain, a pain that was everywhere, like the dazzling, searing radiance that had blinded her.

A disembodied voice floated through the fog of pain that clouded her brain. "Can you hear me? I thought I saw you open your eyes a moment ago. Can you answer me?"

She struggled to break through the layers of mist that gripped her mind. She felt as though she were deep in a bottomless sea and labored to penetrate the viscous misery that engulfed her body.

Tentatively squinting, she barely opened her eyes and tried to make them focus but was fearful that the same brilliance would assault her again. There were rows of lights in the ceiling over her head and the walls were stark white. Slowly she turned her head and blinked her eyes to clear her vision and realized someone was standing beside her, and behind that someone were a number of forbidding machines positioned along the side of the room. "Where am I? Am I all right?" To her surprise, her voice was barely a husky whisper. But the dark-haired woman, dressed in white, watching her, had heard the murmured questions.

The woman's face was expressionless except for her eyes, which seemed to be warm and kind. "Well, hello, you're back with us at last! You're in the hospital, but you're going to be fine." She patted her on the hand reassuringly.

Trying to grasp the woman's hand, her own flailed aimlessly about in the air. It felt so weak and, with dismay, she watched her arm drop limply back onto the bed. "Hos-hospital? How did I get here?" Her throat felt raw and her voice sounded hoarse, but she persisted. "I can't move. What happened to me? Please, I'm scared, I hurt everywhere." She tried to move her arm again to grasp at the woman and this time succeeded in taking hold of the woman's forearm.

The nurse gently took her hand away and said soothingly, "Now, try to calm down. You've been in an accident, but you're going to be all right. I'm going to call your doctor and tell him you're awake. He'll answer your questions."

She watched the nurse move over to the phone that hung on the wall opposite her bed. After a low, mumbled conversation, the crisp white figure came back to the bed, smiling as she picked up her limp arm and wrapped a black cuff around it. Her brain spun, full of half-formed questions as the nurse took her blood pressure and pulse. Finally she couldn't keep silent any longer, but when she opened her mouth to speak, the nurse put a thermometer into it. She tried to quell the panic that was threatening to overwhelm her. What happened? What kind of accident had she had? She felt as though her body had been battered by something or someone, and her head ached horribly.
Oh, why won't someone explain why I feel like this
, she groaned inwardly.

As the nurse was writing some notes on a chart, a tall man in a white coat walked soundlessly into the room. "Good evening, young lady, I'm Dr. Maxwell." The doctor's smile lit up his eyes.

"What am I doing here?" She struggled to sit up but fell back on the bed, swamped by the aches and pains that wracked her body when she moved. Her chest felt constricted and the pain in her head made her senses swim.

"Wait, I'll raise your bed a little. We'll talk for a few minutes if you feel up to it, and I'll try to answer any questions you have. But you must promise me you'll try to stay calm." She watched as he raised the bed and moved the chair the nurse had vacated closer to the side of the bed where she could see him without moving her head around.

Her throat felt raspy and dry and she swallowed tightly, hoping to relieve the feeling. "Why am I in a hospital and what's wrong with me?" she whispered.

"Do you remember driving in a bad ice storm?" The doctor's voice was gentle and soothing.

Her brow wrinkled with concentration. "Ice storm? No, I…" An icy shiver of fear ran up her spine. "I don't remember any ice storm, I don't remember anything." Her voice choked off a sob. "What's wrong with me?" she wailed, and large tears rolled down her sensitive cheeks.

The doctor watched her reactions intently. Her fingers plucked nervously at the sheets that covered her bruised body and he saw the effort to concentrate was draining her quickly. Reaching out, the doctor took her hand and held it gently, trying to transfer some warmth and reassurance from his hand to hers. "There was an unexpected ice storm; you were driving your car and a small truck slid into you. You were lucky that neither one of you was going very fast. But you suffered a concussion, two broken ribs, and a broken ankle. One of your ribs punctured your lung and I had to operate to repair the damage. This is why you feel so much pain right now. You've had a rough time for a couple of days and you've been unconscious for most of it." He paused as he saw she was becoming agitated again and he didn't want to upset her any more than was necessary. "Now, come on, calm down, you're going to be fine. You'll have to stay in the hospital for a while, but in a couple of months, this will all seem like a bad dream." He smiled encouragingly at her and patted her shoulder, hoping he had convinced her that she would be all right.

She dropped her head back down on the pillow. "Why can't I remember any of this? A storm? A car accident? How could anyone forget these things? I'm telling you, I don't remember! There's something horribly wrong." Her voice rose hysterically and her eyes darted around the room seeking escape from the pain and fear that trapped her. "Don't you understand what I'm saying? I can't even remember who I am! I can't remember my own name! You're lying to me, I know you're not telling me everything… I…"

"No, no. I'm not lying to you. I promise you that I've told you the truth and that you're going to be all right." The doctor interrupted with an earnestness that stopped her frenzied outburst. "You have a severe concussion and loss of memory is not at all uncommon. As you start to get better and your bruised brain heals, I feel sure this lapse of memory will disappear. What you need right now is rest and quiet and I'm going to make sure that you get it." Dr. Maxwell stood up and started to push the chair away from the bed.

Frantically she reached out and grasped the edge of his white coat and looked at him pleadingly. "Could you at least tell me my name? Tell me who I am… please!"

Again the doctor took hold of her hand, gently forcing her to release her grip on his lab coat and held her trembling fingers in his warm clasp. "Of course I can tell you your name. It's Sara… Sara Alexander."

A nurse appeared in the doorway. "Dr. Maxwell, you have a phone call."

The doctor glanced over his shoulder at her. "I'll be right there." Turning back to Sara, he said, "I have to leave, but I'll be back to see you tomorrow morning. We'll talk again and I'll try to answer any other questions you have. But, for now, I want you to rest. You're going to be fine." He smiled reassuringly.