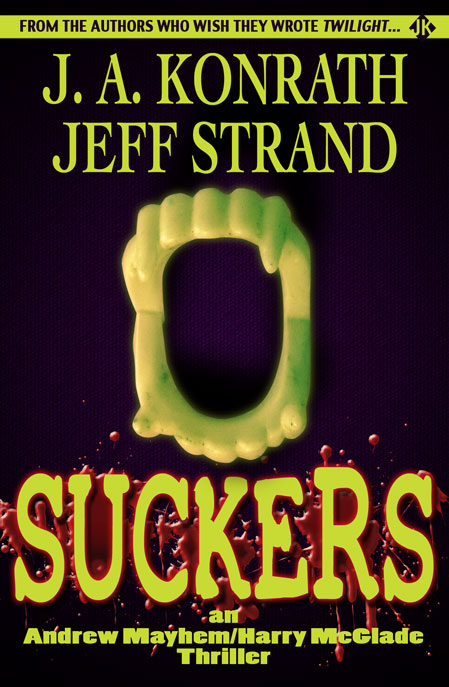 Taken to the Cleaners – Konrath

A Bit of Halloween Mayhem – Strand

The Lost (For a Good Reason) Adventure of Andrew Mayhem – Strand

Preview: MY GUN HAS BULLETS by Lee Goldberg

M
y name is Joe Konrath, and I write a mystery/thriller series about Chicago cop Jacqueline “Jack” Daniels. Jack, and her supporting cast of characters, have appeared in six novels since 2004.

One member of that supporting cast is Jack’s ex-partner, a private detective named Harry McGlade.

Even though he’s guest-starred in all of her books, Jack doesn’t like Harry. He’s an insensitive jerk, a disgusting pig, and a self-centered egomaniac who thinks he’s funny.

Which is why Harry is my all time favorite character to write for.

Unfortunately (or fortunately, depending on your taste) I never get into Harry’s head in the Jack Daniels novels. He’s such a goofball that he strains credulity. If I really let Harry be Harry, the books would be disasters.

Which brings us to these short stories.

In these, I let Harry do whatever the hell he wants to. It’s liberating for me as a writer, and hopefully fun for the reader, as no other stories I’ve ever done have packed so many jokes onto the page.

“Taken to the Cleaners” was published in The Strand magazine. It’s a comedic mystery, with a ridiculous mystery at the core that just keeps getting stupider.

“The Necro File” is an anti-story. I took everything I’ve learned about story structure, plot, and characterization, and purposely ignored it. As such, it’s one of my favorite things I’ve ever written. This originally appeared in the horror anthology
Like A Chinese Tattoo
, and it certainly qualifies as a horror story. Or maybe “horrible” is a better word. So is “offensive.” In fact, you probably shouldn’t read it at all.

Suckers
is a novella I co-wrote with Jeff Strand, originally published in a high-priced, limited hardcover edition by Delirium Books. There may still be copies available. You should buy one.

I first heard about Strand years ago, when I was attending horror conventions as a newbie author. Supposedly there was this guy who also combined scary and funny in his books. I picked up one of his Andrew Mayhem novels, loved it, and began pestering him on a regular basis to write a story with me.

Suckers
is a comedic horror tale that finds Harry joining forces with a very reluctant Mayhem. It was a joy to write, because Jeff and I kept trying to make each other crack up. Don’t look for logic here. But don’t drink anything while you’re reading, because it will come out your nose.

If there’s irony to be had, it’s that after years of being funny, Strand and I recently wrote some very unfunny horror novels.

Under the name Jack Kilborn, I wrote a book called
Afraid
. It contains zero humor. Its goal is to scare the hell out of you.

Strand, using his own name, wrote
Pressure
, which may be the most terrifying novel I’ve ever read. It’s a brutal, full-throttle assault on your psyche.

You know how it’s been said that comedians have the biggest inner demons? These two books prove that comedy writers have some pretty big demons of their own.

As for Harry McGlade…

Jack Daniels, and Harry, are currently on a brief hiatus, as I’m currently writing another Kilborn book. But there is a brand new Harry short story that appears in
Uncage Me
, an anthology edited by Jen Jordan. I doubt that will be the last of him. Like Jack says, “Harry keeps returning, like an antibiotic resistant rash.”

I hope you enjoy the rash as much as I do.

M
y name is Jeff Strand, and I write a comedy/thriller/horror series about Andrew Mayhem, a married father of two who always means well but doesn’t necessarily make the finest decisions 100% of the time. He’s been in three novels. People keep saying “When the hell are you going to write the fourth novel, you slacker?” and I keep taunting them with promises of
Lost Homicidal Maniac (Answers to “Shirley”)
but I have yet to deliver. It’s going to be cool, though. Andrew Mayhem loses another body part.

The Mayhem novels are legitimate blends of the humorous and the horrific—I try to make them as laugh-out-loud funny as possible while still maintaining a genuine sense of danger. The short stories, on the other hand, are much lighter and fluffier. Oh, sure, there’s still cannibalism and stuff, but they mostly just exist to put a goofy smile on your face.

“A Bit of Halloween Mayhem” was posted online (at the stroke of midnight!) as a promotion for the second novel,
Single White Psychopath Seeks Same
. “The Lost (For A Good Reason) Adventure of Andrew Mayhem” was published as a limited edition chapbook that was included with early orders for
Casket For Sale (Only Used Once)
. Those babies are rare. In fact, the chapbook says how many copies are in existence, but that’s a vicious lie—the actual amount is maybe a third of that. I hope you didn’t lose your copy.

“Poor Career Choice” was written for
These Guns For Hire
, an anthology edited by that Joe Konrath guy. He promised that it would make me fabulously wealthy and gain me millions of new fans. I kind of figured that he was exaggerating, but nope, I’m typing this on a laptop made from unicorn horns, and those things are pricey. Thanks, Joe!

I would like to state for the record that I cannot freakin’ believe that Joe is including “The Necro File” in this collection. It’s one of the funniest stories I’ve ever read, but it makes
Suckers
look classy. And
Suckers,
as you’ll soon discover, is not classy.

That said,
Suckers
was a lot of fun to write. It was mostly an “I’ll write the Andrew Mayhem chapters; you write the Harry McGlade chapters” arrangement, but there was some definite spillover, and there are some parts in this story where I honestly can’t remember who wrote what. (And other parts where I remember
exactly
who wrote what, such as a scene involving Harry McGlade’s sexual prowess. That’s all Joe. When you get to that part, please whisper “Author J.A. Konrath wrote this, while author Jeff Strand stood back and shook his head sadly” to yourself, okay?)

I
was halfway through a meatball sandwich when a man came into my office and offered me money to steal a dog.

A lot of money.

“Are you an animal lover, Mr. McGlade?”

“Depends on the animal. And call me Harry.”

He offered his hand. I stuck out mine, and watched him frown when he noticed the marinara stains. He abruptly pulled back, reaching instead into the inner pocket of his blazer. The suit he wore was tailored and looked expensive, and his skin was tanned to a shade only money can buy.

“This is Marcus.” His hand extended again, holding a photograph. “He’s a Shar-pei.”

Marcus was one of those unfortunate Chinese wrinkle dogs, the kind that look like a great big raisin with fur. He was light brown, and his face had so many folds of skin that his eyes were completely covered.

I bet the poor pooch walked into a lot of walls.

“Cute,” I said, because the man wanted to hire me.

“Marcus is a champion show dog. He’s won four AKC competitions. Several judges have commented that he’s the finest example of the breed they’ve ever seen.”

I wanted to say something about Marcus needing a good starch and press, but instead inquired about the dog’s worth.

The Toff In New York by John Creasey
The Border Part Three by Amy Cross
Candidate: A Love Story by Ewens, Tracy
The Secret Catamite Bk 1, The Book of Daniel by Patrick C Notchtree
CheckMate 4: Winner Takes All by Tiece
Nowhere Girl by Ruth Dugdall
And kill once more by Fray, Al
Aftermath of Dreaming by DeLaune Michel
Shiverton Hall, the Creeper by Emerald Fennell
The Bank Job by Alex Gray