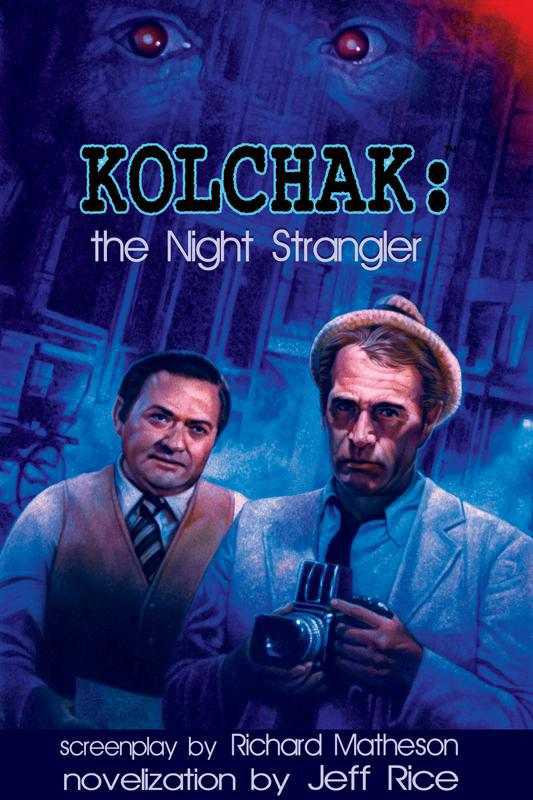 The Kolchak Papers: The Original Novels

Without limiting the rights of the copyright reserved above, no part of this publication may be reproduced, stored in or introduced into a retrieval system, or transmitted, in any form,or by any means (electronic, mechanical, photocopying, recording,or otherwise), without the prior express written consent of the publisher and copyright holder.

This is a work of fiction.  Names, characters, places, and incidents either are the products of the authors’ imagination or are used fictitiously, and any resemblance to actual persons, living or dead, business establishments, events, or locales is entirely coincidental.

It had been almost two years since my quiet, orderly life was jarred into a series of confrontations with un-cooperative police and government officials, frightened witnesses, and reports of “mysterious,” “convenient,” and “coincidental” deaths. I say jarred “into” rather than “by” because these events did not intrude into my life. I invited my life into them. Let me make this clear: I had no earthly reason to get involved. I had better sense. Or so I thought. Yet I fell for the bait—hook, line and sinker. I
voluntarily
joined “the hunt” and made myself a party to the subsequent loss of friends, business contacts, and the dissolution of my association with a Los Angeles advertising agency which shall remain nameless—the parting of the ways was not exactly voluntary and not at all pleasant. Now I am no longer in advertising. Not in Los Angeles. Not anywhere. Now I am a “novelist.” Now I sit alone and ponder how one seedy, aggressive, hard-drinking and frequently fired reporter could have wreaked such havoc upon my once placid existence.

His name is Carl Kolchak and he is a man out of his time. It is as if he stepped straight out of Hecht and MacArthur’s
Front Page.
When I met him, in his cups and down on his luck as a third-rate publicity man for a fourth-rate actor (who was doing voice-overs for one of our clients), he imparted some information to me that he claimed would lead to “one of the biggest crime stories of the decade.” He claimed that several young women had died at the hands of “a real, live vampire” in Las Vegas where he had worked for the
Daily News
and that all his efforts to get the facts published had been suppressed in the greatest cover-up in Las Vegas’ history. The story was fantastic. Idiotic. But, fool that I was, I became intrigued enough to investigate his claims. What I discovered led me to transcribe his notes and tapes into a report to which my publishers chose to affix the undignified (but reasonably accurate) title
The Night Stalker
. It took more than two years of struggles against the aforementioned suppression before I found a publisher courageous enough to print the entire account verbatim.

I lost contact with Kolchak in November of 1970, and for a time greatly feared he had been silenced permanently by the same sinister forces that seemed to have conveniently removed others who could have testified to the incredible events in Las Vegas.

Then, a few months ago, I received the following note, hastily scribbled on a sheet of the kind of pulp paper commonly found in newsrooms:

By now I’m sure you thought they’d finally put me away or shut me up for good. Well, I’m still alive—nominally—and kicking as usual. The enclosed tapes should be self-explanatory. Whatever needs additional explaining is covered in the accompanying notes. I
know
what you’re going to say: “Not again!” Save it. You know for yourself that such things
do
happen. And you proved you can do more than con the great unwashed into buying some useless product they don’t need. I saw the book. Aside from a few unkind and uncalled-for references to my character and the general quality of my thinking, you gave a fairly accurate rendition of what I went through. When I finally light somewhere long enough to receive mail—someplace I can find a job—I’ll get in touch with you and we can discuss how much of the royalty money you’re going to send me.

In the meantime, if you haven’t become too comfortably settled in your (hah hah!) new-found wealth and your investigative instincts haven’t atrophied, check out the enclosed and see what you can do with it. As usual, I’m on the run and short of the time and money to do it properly. And, as you will discover, I’m not exactly alone.

Yes, goddamn it, it’s happened again! At first I couldn’t believe it myself. But before I realized it I had gotten into it right up to my eyeballs. I’d write the damn thing myself except I’ve got to find something that pays and find it quick. I think I’ve got something here (you’ll find out from the tapes) and I don’t want to blow it. I’m getting a little old for second chances.

Well, don’t just sit there on your fat ass. Start writing. I don’t know about you, but I need the bread.

P.S. If you think you could part with a few dollars to tide me over, put them aside and I’ll let you know where to send them.

At first, I must admit I was glad to discover Kolchak was alive and well and (hopefully) residing somewhere in the United States. But there was a still, small voice in my head that warned me against getting involved. Like many an unwitting man before me, I ignored it. It appears now that I have become the “voice-piece” for Kolchak, and I shudder to think that when he does contact me—I have heard nothing further from him as yet—he will embroil me in yet another of his escapades. At any rate, what follows I my earnest effort to relate Kolchak’s misadventure in his own terms as well as my talents will allow.

I must state here that I received something less than enthusiastic cooperation from Police Captain Raymond Schubert and none at all from Dr. Christopher Webb, the King County Medical Examiner, who dismissed me with a curt “No comment.”

From Lucius Crossbinder, publisher of the Seattle
Daily Chronicle
, I quote: “If you have come here seeking something to lend credence to the lunatic blatherings of that incompetent lout Kolchak, Mr. Rice, you are a bigger idiot than he, sir, and I’ll have no truck with you or any of your ilk. On the
Daily Chronicle
, sir, we are concerned with fact
—
hard fact—and not sensation. Now kindly leave, sir, or I shall be forced to have you ejected from these premises.”

However, I should like to acknowledge the following persons who rendered varying degrees of assistance in preparing my text:

Janie Carlson, an associate editor on the same newspaper, whom I contacted at her home on Overland Avenue and who gave the same response, and who, possibly not incidentally, does most of her work from her home nowadays and rarely goes into “the office” anymore.

Dr. Charles L. Adams of the English Department of the University of Nevada at Las Vegas who, in turn, put me in touch with his former colleague:

Dr. Kirsten Helms, a recognized authority in the field of myths and legends, who granted me a few minutes of her time and held back nothing, as she packed in preparation for a “research tour” of Rumania.

And, also for their invaluable assistance and cooperation:

The Great Seattle Fire had been raging for hours, virtually unchecked. A flaming glue pot in a print shop had spread death across the entire city. And the fire couldn’t be stopped.

Fraud and malfeasance of duty had once again reared their ugly heads above “Skid Road,” the boom-or-bust town. There was the little problem of the privately owned water system which was required by franchise to supply the necessary water pipes to the city; which it did. Seattle’s Solons had wisely set up a specified number of fire hydrants by ordinance. Unfortunately, there was nothing in said ordinance that required those pipes to be hooked up to the aforementioned hydrants.

Result: Virtually the entire city, sixty-six square blocks of brick and frame buildings, went up in flames with the smoke blotting out what had begun as a bright summer’s day.

Among the structures in the path of the inferno was the magnificent Westside Mercy Hospital, a five-story brick and wrought-iron structure with not one, but
two
hydraulic-electric elevators, which had opened its doors only seven years before. Except for a few areas, a fire-proof laboratory, and parts of the central court, the building was gutted, and in the rebuilding that followed, abandoned. As with most of Seattle’s other buildings, all records stored within its business offices were destroyed and there is no accurate accounting of how many persons perished in the holocaust.

On Saturday, April 1, 1972, Merissa, one of three belly dancers employed at a scabrous downtown Seattle night spot called Omar’s Tent, was making her way through the drizzle to St. James Street where she hoped to catch the 3 a.m. bus that would take her to her small apartment in the Shoreline Park area. She was tired and ready for a good night’s sleep. As was her usual custom, she planned to take a shower and go right to bed.

Ethel Parker. Thirty-two years old. A professional dancer for 13 years who had never really made the grade. She had worked in small clubs in Boston and Montreal and Chicago, in both Vancouvers, and finally in Seattle.

Ethel Parker. A woman alone. Well, not quite alone.

As she shivered in the 45-degree temperature, her heels clicking hollowly on the pavement, she suddenly froze near an alley. She thought she heard footsteps nearby. She listened but heard nothing.

Satisfied it was only her nerves on edge, she resumed her walk, when she heard sounds of a bottle falling to the pavement in the nearby alley and rolling about. Once again she stopped and turned toward the alley. Again, nothing.

Cervena by Louise Lyons
If He's Daring by Hannah Howell
The Bombay Boomerang by Franklin W. Dixon
The Feast of Roses by Indu Sundaresan
Late Life Jazz: The Life and Career of Rosemary Clooney by Crossland, Ken, Macfarlane, Malcolm
[B.S. #2] Bound to Cyn by Dale Cadeau
An Absent Mind by Eric Rill
Deadly Magic by Elisabeth Crabtree
The Downfall of Money: Germanys Hyperinflation and the Destruction of the Middle Class by Frederick Taylor
Hamilton, Donald - Novel 02 by The Steel Mirror (v2.1)