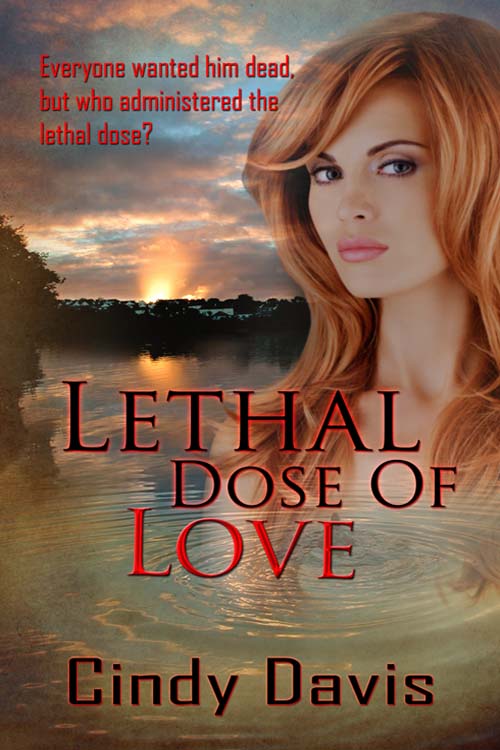 Cindy Davis creates a fantastic story of betrayal, suspense and intrigue in
FINAL MASQUERADE
. The tension in this novel makes this book hard to put down. The reader suffers along with Paige as she tries to make a new life for herself and feels her pain when she leaves friends behind each time she is found again. Cindy Davis has certainly created a winner with this novel.

~The Road to Romance Reviews

Many of my dedications read: for Bob, he knows why. I always thought it was sort of self-explanatory, but people wondered. So here goes: It’s rare in life to meet your soul mate, the one person who understands and loves everything about you, which in my case is—well, let’s not go there.

In 1990 I met my soul mate. Rather than a long-winded story about soul mates, I’ll relate a short story that happened in 2005. We were chugging along in our motorhome in upstate New York when we approached a sign saying Welcome to Historic Sackets Harbor, established 1801. Nothing unusual about this sign. Nicely done, fresh paint. Strategically placed. An author never knows when inspiration will strike. But strike it did. I shouted, “Stop!”

Bob stopped. Dogs flew off couches. Toaster tumbled to the carpet. Most husbands would’ve said, “What the...is wrong with you, woman!?” Not Bob. He said, “Here’s a pen.”

We spent three days in lovely Sackets Harbor, a village of 1,400 nestled on the shores of Lake Ontario and the fantastic Black River Bay. We interviewed helpful historians, friendly chamber of commerce members, and gracious shop owners—and came away with the plot outline for this book. The mystery is finally a reality.

As an addendum: at the second publishing of this book, the dedication is even more apropos since I lost my soul mate this year. I know he’s looking down on me and giving a giant pair of thumbs-up!

Claire Bastian motored her little hatchback onto Main Street. It wasn’t hard to find a parking space this time of year. Tourist season didn’t start for a few weeks yet. What on earth was going on up ahead? Sean and Payton were standing in the middle of the street. Clearly they were having a disagreement. Well, Sean was having the disagreement. Payton was staring at him as though he’d lost his mind. Which, maybe he had. He shouted something and stabbed an index finger in the air just above Payton’s left breast. She never flinched.

Good girl. Time someone stood up to him. Claire stopped the car a few feet from them and turned down the volume on the CD playing Neil Sedaka’s “Bad Blood.” She lowered the window and was assaulted by a chilly May wind off the harbor.

Sean’s finger moved up, now poking the space just under Payton’s nose. “We had a deal.”

“There. Was. No. Deal.” She said each word with definition.

He took a step and a half forward and leaned in her face. “We had a deal.”

“You’re crazy, you know that?” She made two sideways steps left, but he grabbed her arm and jerked her back. She wrenched away, shooting him a glare rivaling Scarlett’s to Rhett.

He was going to hurt her. Claire lunged out of the car and dashed toward them. Why couldn’t he just leave people alone?

Sean spotted Claire. “What do you want, you interfering old biddy?”

Claire positioned herself arm-to-arm with Payton. The united front—or possibly the crowd that had gathered on the sidewalk—forced Sean to slap his mouth shut and stalk across the street and inside his café.

Two taps on a horn spun Claire around. She threw the driver a shrug and went to move her car out of the way. What were Sean and Payton fighting about? Yesterday at the yacht club meeting everything was fine. Wasn’t it?

Come to think of it, maybe everything hadn’t been fine. Sean had asked Payton to be his sailing partner, and she said she was buying a boat and partnering with someone else. Still and all, that shouldn’t lead to something like this. He’d spouted something about a deal. Deals meant money. Claire got out of the car and pocketed her keys. Maybe Payton wanted to talk; when Claire was upset it helped talking to Mamie.

But Payton had disappeared.

On the sidewalk, two men on tall ladders were fastening a cloth-covered sign above the long-vacant hardware store. Claire watched the workmen, hoping they’d drop the covering and reveal the newest shop addition to their small-town Main Street. Maybe she could sneak under the ladders and peer through the plate glass window. No, the window was covered with newspaper, sheet upon overlapping sheet of the
Watertown Daily Times
taped to the glass. Claire wouldn’t like the job of scraping off all that stickum. Besides, it was bad luck to walk under a ladder, probably twice as bad to walk under two of them. She resumed her original plan, a trip to the post office. Overhead, bare branches on the row of young crabapple trees rattled in the wind.

Not that the opening of a new store was a big event in Sackets Harbor, New York. Flatlanders did it all the time thinking they’d make a killing with the tourist trade. What they invariably forgot was that tourists only came from Memorial Day to Labor Day. That left seven months to pay rent and utilities with no income, because chances of the locals buying cheap ceramic dragons or chintzy imported vases were slim. Most of the shops folded in two seasons. Through all the openings and closings, the hardware building remained vacant: too large for a gift shop, too unwieldy to be divided into smaller shops, and too expensive to be bought and torn down. Till now. Apparently someone thought they could make it work.

Who? And how could this information have slipped past the Sackets Harbor gossip committee? There were permits to be applied for, leases to be signed, utilities to be connected and advertising to be bought. Surely someone would’ve heard something.

Claire finished her business at the post office and went outside where the workmen still fought with the heavy-looking sign. Maybe they should have picked a less blustery day. No good. There were few days without some sort of bluster off the harbor. One of the men climbed down two rungs and knocked on the window. Claire didn’t try to squelch the gasp of surprise when Payton came out carrying a clipboard and pencil. She stepped off the sidewalk and returned to the middle of the road. Claire glanced at Sean’s café to see if he was watching out the big, wide window, waiting to race out and rekindle the argument. He wasn’t.

Payton tilted her head, giving the sign a critical gaze. After a moment, she nodded approval. The men gripped identical white ties at either end of the sign. Payton nodded. In unison they tugged on the strings and the covering dropped away. With a crack like thunder, the giant nylon sheet snapped into the air. An enormous moth now, it lifted, dipped, lifted again and then landed, taking down a whirlwind of dry oak and maple leaves under it.

The sign was exposed: white background, green vines twining the edges, green and gold lettering.
Payton’s Place ~ Exotic and Domestic Plants.
The gossip pipeline had really missed this one. As a matter of fact, they’d missed the whole boat on Payton Winters’ arrival in town four months ago. So far all anyone knew was that she had once been married and apparently had a bottomless canyon of money.

Claire roused herself and blinked the owner of the voice into focus. Payton’s face was beautiful and smooth. High cheekbones, almond-shaped eyes. Auburn had to be her natural hair color—it matched her brows. Payton repeated the question. Claire pointed to the workmen and quirked a sheepish grin. “When the cover dropped, I sort of expected them to wave magic wands and say ta-da.”

Payton smiled. White, square teeth. Was anything
not
perfect about this woman? Claire bet she didn’t even wake up with bed-head. Payton wore a bewildered expression; had she read Claire’s thoughts? People always said her face was an open book. To cover the awkward seconds, Claire said the first thing that came to her mouth, “You’re opening a flower shop.”

Payton’s hair, pulled through the strap of a Twins baseball cap, swung like a pendulum across her shoulders. She wore blue Levis and a pink hooded sweatshirt topped by a fleece LL Bean vest.

The shop door stood open. Brown leaves lifted in a mini-tornado in the doorway. Payton and Claire pushed through and climbed the pair of cement steps. “I warn you, the place is a mess.”

The room was a rectangle stretching toward the back. The walls wore a fresh coat of white paint. Beneath the paint smell was a mustiness that would probably take months to erase. Tools and wood everywhere, shelves of every shape and size piled at one side, cardboard boxes stacked against the far wall. Sawdust floated in the air, brilliant twinklers in the afternoon sunshine.

Payton waved at the wall on the side of the building that faced an empty lot. “I’m having a door and a large bay window put in there. Outside will be a patio area with a lattice enclosure and flagstone paths.” She took a breath. “Patio furniture and chimneas, lots of hanging plants.”

Claire turned in a circle, imagining. “It sounds lovely.”

A squeak and whoosh of cold air made them whirl around. Someone stood silhouetted in the doorway. From the shape, which included an apron, it had to be Sean. The twister that spun leaves outside the door became one in Claire’s stomach. Damn him.

“What the hell do you think you’re doing?” He lashed out an arm that encompassed the room and repeated his question.

So, he’d just learned about the shop, too. That meant their discussion in the street was about something else. Claire thought back to what they’d said: “We had a deal.” “There was no deal.”

“As if you didn’t see the sign,” Claire couldn’t help saying.

“Leave Claire alone. What do you want?”

“You aren’t taking up all the street parking with a-a flower shop.”

“What’s wrong with a flower shop?” Claire was unable to keep from mimicking his tone of voice. When she corrected herself, saying, “exotic plant shop,” Payton flashed her a grin.

Evil That Men Do by Hugh Pentecost
El Valle del Issa by Czeslaw Milosz
Uschi! by Tony Ungawa
According to Hoyle by Abigail Roux
To Love and Serve by Caridad Piñeiro
Cayman Desires by Simmons, Sabel
Rose Petal Graves (The Lost Clan #1) by Olivia Wildenstein
Travels with Barley by Ken Wells
Remembrance by Danielle Steel
The Shadows of Grace by David Dalglish