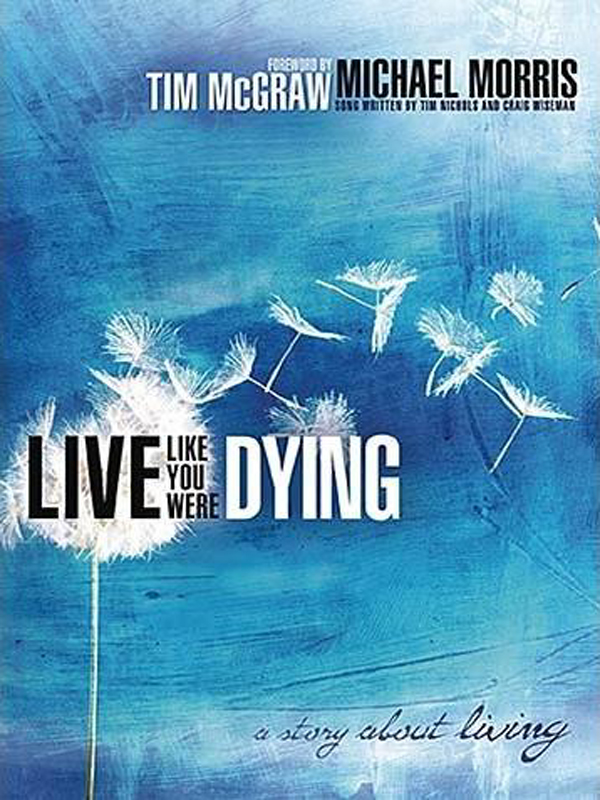 a story about living

Published in Nashville, Tennessee, by WestBow Press, a division of Thomas Nelson, Inc.

Publisher's Note: This novel is a work of fiction. Names, characters, places, and incidents are either products of the author's imagination or used fictitiously. All characters are fictional, and any similarity to people living or dead is purely coincidental.

For my dadâLarry Stroudâ
a man who has always been man enough
to say, “I love you.”

Prior to learning that Westbow Press wanted to publish a novel based on “Live Like You Were Dying,” I had heard the song on the radio and instantly pictured the character that grew to become Nathan. Thank you, Craig Wiseman and Tim Nichols, for writing a beautiful song that inspires and challenges on so many different levels.

I'm also grateful to Jenny Baumgartner and Allen Arnold at Westbow Press for thinking of me for this project. Writing the story was a privilege and has given me pause to rethink my own life.

If it had not been for the kindness of JoAnn Miller in opening up her North Carolina mountain home, the manuscript might not have arrived on schedule. JoAnn, your hospitality and friendship are valued. I also appreciate the friendship and guidance I've received from Dr. Michael Ledet of Mobile, Alabama. Mike, thank you for answering all of my questions with genuine interest in the story.

As always, I'm indebted for the love and support that I continue to receive from my wife, Melanie. To my parents, Larry and Elaine Stroud, thank you for all of your encouragement and advice during the writing of this novel. And finally to my agent and friend, Laurie Liss, thanks for your tireless advocacy and endless humor.

A lot of people assume that I recorded “Live Like You Were Dying” because of the passing of my father, Tug McGraw. But my passion goes a lot further. I love this song because I believe that everyone who hears it will have their own unique reaction to it. Each person has his or her own definition of what it means to “live like you were dying.” That's what makes it such a great song.

It's not just about my personal connectionâ although obviously there is oneâit's about how you connect to it. I hope it can provide inspiration for all of us to stop and take time to appreciate all the blessings in our livesâfrom the smallest things to the biggest dreams. God bless.

by Craig Wiseman and Tim Nichols

He said I was in my early forties
With a lot of life before me
When a moment came that stopped me on a dime
And I spent most of the next days
Looking at the x-rays
And talking 'bout the options, talking 'bout sweet time

And I asked him when it sank in
That this might really be the end
How's it hit ya' when you get that kind of news
Man, what'd you do (he said)

And I finally read the good book
And I took a good long hard look
At what I'd do if I could do it all again . . . and then

A shrill whistle signaling the start of the night shift at the paper mill caused the walls of my office trailer to rattle. Standing at the window, I watched as smoke poured from the tall pipes that lined the top of the plant and twirled up into the dark Georgia sky. The smell of the mill overpowered that of the lukewarm coffee I was drinking, an odor that had almost made me sick the first time I experienced it. “The smell of money,” my old college buddy, Jay Beckett, said of the stench that could cause even the hardest of men to curl his nose. When I dropped out of college to work for his start-up company, Beckett Construction, my wife's father had told me that I'd never make more than a laborer's wages. In just twenty years, I was making twice what my father-in-law did and now carried the title of project engineer on a business card. Sweat and long hours had paved the way for success, but the toll I'd paid could not be measured in dollars and cents.

The smell of money turned out to be an axis between my soul and my family. A dividing line that separated me into two halves until I stumbled through life feeling like the magician's assistant in a show I'd once seen.

At a resort theater in the Bahamas, I occasionally glanced at the engineers I was asked to entertain for the sake of renewing a company contract. While the magician with the red cape and black spandex pants guided a chain saw down the center of a white box, the assistant who lay inside never flinched. She just smiled and looked up at the ceiling that glowed with colored lights, withdrawn from the massacre that was taking place below.

While the tips of the assistant's sequined shoes sparkled, the engineers who sat next to me grimaced and sucked in their breath at the idea of the beautiful woman being ripped in two. But I just kept staring at her blue eyes and thinking that I knew how she felt, being torn away bit by bit from a part of your being. That night marked the first time that I'd missed an event in my daughter's life. The night she had walked across the stage at the local community center, looked at her teacher, and reached up her tiny hand for her kindergarten diploma.

Regret was a heavy opponent back then. I flew back to Atlanta crumpled against the plane window, feeling the weight that comes with bad decisions. But over time the trappings of more contracts and larger bonus payouts had tipped the scales of balance. Soon regret was nothing more than a feeling, a slight irritation that could be swatted away with the justification that I was missing family events in order to make those I loved happy with gifts that time could not buy. The rationale never had made any sense to my wife, Heather, no matter how many different ways I tried to explain it or how many times I called to say that I was sorry.

Seven years later I found myself answering my office phone and still offering the same explanations. This one was for my daughter's gymnastic event that I'd missed because of an employee who hadn't bothered to show up for work, but Heather was no longer listening. She was only talking, louder and louder, till I had to pull the phone away from my ear. Even from a distance her question cut through the cloud of excuses and left me remembering exactly how cold the airplane window felt against my face the night I leaned against it and tried to convince myself that work was more important than a kindergarten graduation.

Through the phone line my wife's question sounded like a riddle, but there wasn't any sign of playfulness in the tone. “Tell me something . . . are you just living to work, or working to live?”

A loud noise from the paper mill's compressor broke the silence, and my metal desk vibrated. At first I thought of acting like I hadn't heard her question. But Heather knew all of my tricks. Ignoring a question might work with my employees, but it never worked with Heather.

“What?” I finally asked.

“You heard me . . . Look, there's no use going over this for the hundredth time. What's done is done. Just promise me that you'll take a nap or something. There's got to be a place you can hole up in for at least thirty minutes. Working a straight double shift, three times in one week . . . missing Malley's gym meet. Come on, Nathan. It's insane.”

“Yeah, tell that to the millwright who didn't show up for work tonight. âA death in the family,' he said. Funny, they always manage to pull off a death when they need to.”

Genie and Engineer 1: The Engineer Wizard by Glenn Michaels
Take Me Tonight by Roxanne St. Claire
Tell Me No Secrets by Joy Fielding
Dragon by Clive Cussler
The Man Who Smiled by Henning Mankell
Blue Skies on Fire by Zenina Masters
Life Is Not an Accident by Jay Williams
Her Guardian Angel 4-Her Angel Series by Heaton, Felicity
Worth The Effort (The Worth Series Book 4: A Copper Country Romance) by Jacobs, Mara
Gunning for the Groom by Debra Webb