Lose the Clutter, Lose the Weight 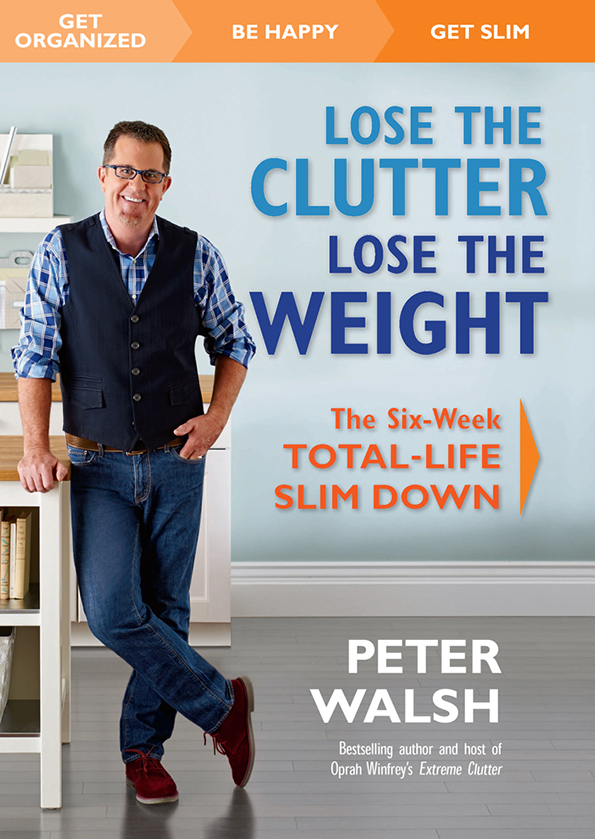 “There are a million books out there on organization, and there are a million more on dieting. So what's different about
Lose the Clutter, Lose the Weight
? Peter Walsh brings in not only common sense, but also darn good science. He explains the links between clutter and weight and gives us a solid look at the psychological, biological, and nutritional science that will put us on the right track. This book will change lives.”

“
Lose the Clutter, Lose the Weight
cuts through the mess of organizational and weight loss noise out there and tells you exactly how to shape up your body and your home. Peter Walsh's tough-love approach makes you re-think your entire approach to mindless clutter and mindless eating.”

âRACHAEL RAY,
daytime host and bestselling author of
Week in a Day

“Peter Walsh is truly a guru. After watching him work his magic for years, I know that people will begin living the clutter-free lives they deserve after reading this book and putting his advice to work for them.”

âNATE BERKUS,
designer and author of
The Things That Matter 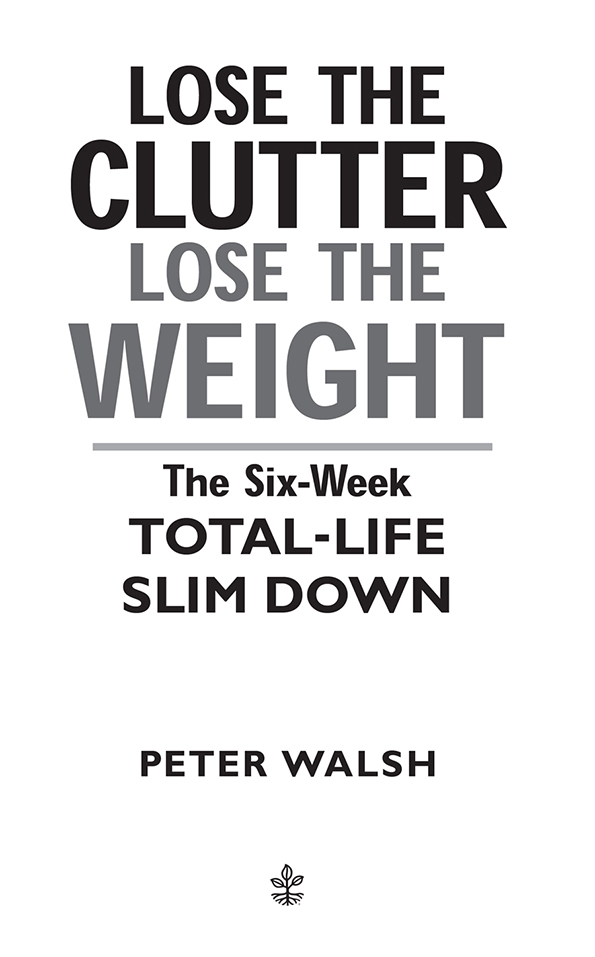 To
those who've always helped me keep my perspective: 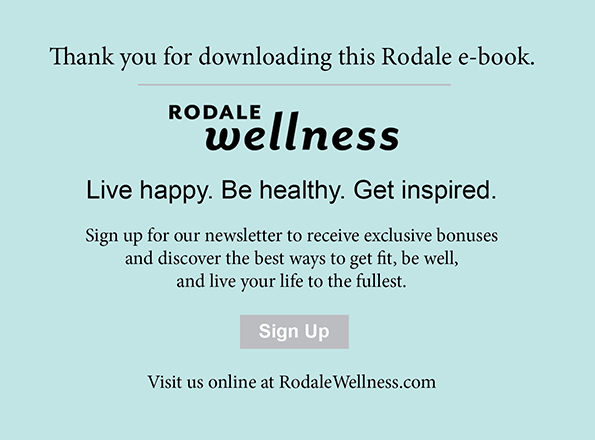 HOW CLUTTER INVADES YOUR HOME, YOUR BODY, AND YOUR MIND

Chapter 1
The Hidden Forces That Make Your Home a Mess

Chapter 3
Where Am I Now (and How Did My Mind Bring Me Here)?

Chapter 4
Clutter and Fat Are No Match for Your Mind

THE LOSE THE CLUTTER, LOSE THE WEIGHT BLUEPRINT

Chapter 5
How the Program Works

Chapter 6
How to Eat to Lose the Weight

Chapter 7
How to Move to Lose the Weight

Chapter 8
Make Each Week a Success

Chapter 9
Week One: Your Cooking and Dining Areas

Chapter 11
Week Three: Your Bedroom Closet and Your Bathroom

Chapter 15
How to Make Your Positive Changes Last a Lifetime

How Did I Get This Way?

I
t's a reasonable question to ask when you see a vacation photo that gives you a pang of shock at your appearance.

You may have a photo like that. You'd been happily going along, ignoring the deep indentation that the waistband of your jeans was leaving in your skin (so much for “relaxed fit”) or the appearance of new numbers or letters in your bra size.

But there's no getting around this photo, which looks nothing like the image you see in your mind. Somehow, at some point, you became too large for your comfort. Now you know the truth, but you aren't sure what to do about it.

How Did I Let My Home Get This Way?

Another common question. As with your body, the state of your household can sneak up on you. Sure, you know that things are a little messy. But when your aunt arrives at your door unexpectedlyâor your pastor, or the new neighbors, or the air conditioner guyâyou suddenly see the place through that person's eyes. You didn't really let yourself think about it before, but now you can't avoid it: Your home embarrasses you.

So how did you get here? Given the environment we live in, I'd say a more useful question is this: How can your body and home
not
get to this point?

You're also surrounded by easy choices. Why dirty your pots and pans when you can go out to eat and someone will make your meal for you? Hold that thought. Why take an entire hour to eat at a sit-down restaurant when you can roll your car through the drive-thru? Wait . . . even better: Order a sub sandwich from your smartphone and have it delivered to your home. You don't even have to get up.

On that note, why spread your own mulch when the landscaper who left a flyer in your mailbox will do it for you? Why stand up and go for a jog when you're comfortable sitting on the couch? Why go to the hassle of throwing out a bunch of stuff when you can just stash it in the garage and park your car outside?

These have all become perfectly normal decisions for many people.

That's not to say that Americans don't like to work. In 2013, the average American worker put in 1,788 hours on the job. We spent more time working than our counterparts in France (1,489 hours), England (1,669 hours), and even Germany (1,388 hours). And Americans receive less paid time off, in the form of vacation days and paid holidays, than people in many other nations. Surveys have found that many workers can't even tear themselves away from the job to take all their vacation days over the course of the year.

If you're putting in long hours at the officeâthen juggling work issues over your phone and computer in the evening while you're trying to raise a familyâit's not surprising that you would look for shortcuts whenever you can. If society offers a way for you to eat faster, handle a chore more quickly, or feel better about yourself for just a few bucks, how can you resist? Everyone else seems to be doing it.

So you wind up living like the average, everyday people around you. You buy a lot of stuff, and you take things easy when you can. Most days, it won't occur to you to examine the effect these “normal” choices are having on your life.

Perhaps you don't notice that your pants size has grown because you see other people your size every day. If you pluck three American adults out of the
crowd
at random, only one will have a normal, healthy weight. The second will be overweight. The third will be obese, or in other words, extremely overweight. When two-thirds of those around us are heavy, then heavy becomes the new normal. The one who's at a healthy weight is
unusual
.

Manufacturers are adjusting their products to keep up with the nation's growing girth. The world around you now offers extra-large ambulances and stadium seats and movie theater seats and operating tables and casketsâall built to be extra spacious and strong to accommodate the typical modern user. Like the ever-growing portion sizes at restaurants, these subtle enlargements in your surroundings seem normal now. They can reinforce the idea that there's no reason to change your eating habits, your exercise habits, or your size.

And just as you might not notice your growing weight because your surroundings mask it, you may not notice how overstuffed your home has become. Your friends and neighbors, and your counterparts in other affluent countries around the world, tend to have a
lot
of stuff crowding their homes and their lives, too. The portion of American adults who meet the criteria of hoarding disorder is now estimated to be a little over 5 percent. This means that every year, about
23 times
more people in the United States have a hoarding problem than have a heart attack!

I'm convinced that the number of Americans who
don't
meet the definition of hoarding, but who have so much household clutter that it's hampering their lives, is much, much higher. If you doubt me on this, I challenge you to drive down any suburban American street on a sunny spring day when garage doors are often up. How many garages do you see in your neighborhood that are so overstuffed with clutter that it's impossible to park a car in them?

These aren't the people who are clinging to floor-to-ceiling stacks of moldy newspapers, but they're not comfortable inviting company over. They may never need a team of workers in hazmat suits to empty the contents of their home into a Dumpster, but they could easily fill a bunch of trash cans, then throw a terrific yard sale with the items they no longer need, use, or want.

As I'm writing this, my Facebook page shows me standing in someone's backyard in my native Australia. I'm over there fairly often as the decluttering and organising (that's how they spell it Down Under!) expert on an Australian TV program. In the photo, which is taken from a distance, you can see a tiny Peter Walsh standing in a sea of furniture, boxes, and general
stuff
. This giant trove of material possessions was taken from just three rooms of the house I
was
working in. More than 300 boxes of books, memorabilia, craft supplies, clothing, shoes, toys, and paperwork . . . from just three rooms in one home.

The house was quite clutteredâbut I wouldn't say it's that far outside the norm. It's an example of what many people would call a normal life, just as being overweight or even obese is now quite average.

Everywhere we look we see people living in cluttered homes. Most of the bodies maneuvering around inside those homes are also overcluttered with extra flesh around the waist and under the chin.

These homes typically aren't small. The average size of a new house in the United States has swelled by more than 60 percent since 1973. That's a lot of extra room to contain more stuff. More clutter. More stress. (But many people tell me that they feel an ever-present sense that they
still
don't have enough room.)

People struggling with too-heavy bodies and overstuffed homes often have heavy mental and emotional burdens, too. This is also a type of clutter, even though it's not as visible as the clutter in our homes and on our hips. In 2010, more than 20 percent of American adults were taking a medication to treat mental health issuesâoften depression and anxiety.