Love Finds You on Christmas Morning 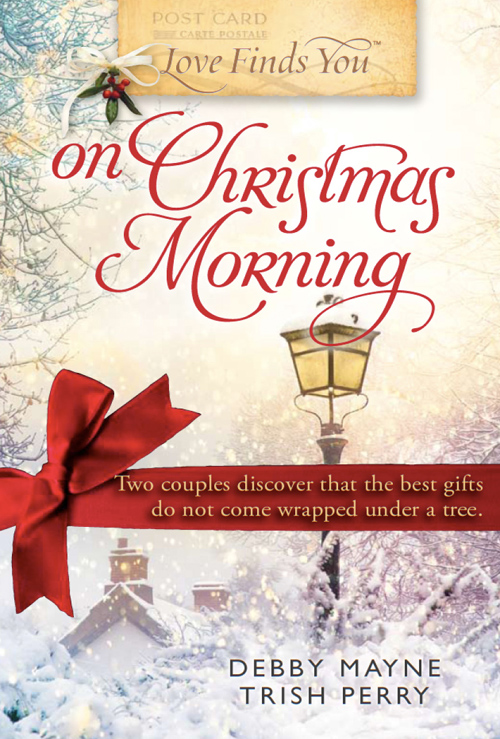 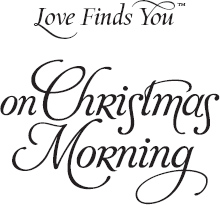 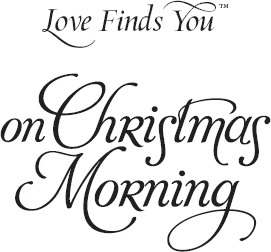 BY DEBBY MAYNE
AND TRISH PERRY

Love Finds You on Christmas Morning: Deck the Halls
© 2011 by Debby Mayne

Love Finds You on Christmas Morning: ’Tis the Season
© 2011 by Trish Perry

All rights reserved. No part of this book may be reproduced in any form, except for brief quotations in printed reviews, without permission of the publisher.

The town depicted in this book is a real place, but all characters are fictional. Any resemblances to actual people or events are purely coincidental.

Summerside Press™ is an inspirational publisher offering fresh, irresistible books to uplift the heart and engage the mind.

We would like to thank Tom Byrd, author of
Around and About Cary,
for providing historical information about the charming town of Cary, North Carolina.

Thanks also to Howard Johnson, president of the Cary Chamber of Commerce, and Paul Ashworth, proprietor of Ashworth Drugs.

Lord, thou hast been our dwelling place in all generations.
P
SALM
90:1
KJV

Lillian Pickard shifted her weight to take some of the load off her aching feet. There always seemed to be one customer who lingered at the end of the long day, keeping Lillian from locking up Joachim’s Five and Dime and going home. She took a couple of deep breaths and tried to remain pleasant as Mrs. Gooch carried her handheld basket of odds and ends to the counter.

Lillian rang up the woman’s selections and bagged all the items then handed them to her. “Have a nice evening, Mrs. Gooch. See you again soon.”

“You are a mighty sweet girl,” Mrs. Gooch said as she took her bag. “It’s a shame you have to work such long hours. Give my regards to your mama.”

As soon as Mrs. Gooch made her exit, Lillian scurried to the door and locked it, just in case anyone had the notion to walk in. She counted the money in the cash drawer, tucked it inside the deposit envelope, and slid the envelope into the slot on the side of the safe.

Finally she was ready to leave for home. The tiny house she shared with her parents was less than a half mile away, but on evenings like this, it might as well have been ten miles. Her feet throbbed and her mind raced over all the things she still needed to do when she got home.

Her daddy’s factory injury five years ago had rendered him incapable of working most of the jobs he was qualified for. He’d needed Lillian’s mama nearby to take care of him in the earlier days, so it had been up to Lillian to support the family. She didn’t mind at first, but as time went on, it became painfully obvious that her lot in life wasn’t what she’d always wanted.

The first raindrop plopped smack-dab in the middle of her head as she crossed the road. Lillian groaned. As if her situation weren’t already bad enough …

She heard the rumble of an automobile coming toward her, so she jumped back, closer to the building. She turned to see which of the rich people were out riding around. There weren’t many automobiles in Cary, North Carolina, and it was after business hours, so Lillian assumed it was someone showing off.

The automobile pulled to a stop, and the man driving it leaned over and cranked down the window. “Hey, gorgeous! Need a ride?”

Thank the Lord the sun wasn’t shining or William Tronnier would see the redness of her flaming cheeks. “Mr. Tronnier!” But before she had a chance to say anything else, the occasional raindrop progressed to a steady downpour. “I always walk home from work, but thank you for the offer.”

He laughed. “You shouldn’t have to walk in the rain when I have this perfectly fine automobile. Get in before you drown.”

She only hesitated for a few seconds before deciding that taking him up on his offer was much better than getting drenched. As she stepped up into the automobile, her ankle wobbled.

“Whoa there, Miss Pickard.” He leaned across the seat, opened the car door from the inside, and reached for her hand, which she gave without a second’s hesitation. He pulled her up to the seat and quickly let go.

There was no way William would let this opportunity slide by. He’d all but given up on breaking through Lillian’s shell when he spotted her walking home. Ever since meeting Lillian Pickard last Christmas season, he’d tried to come up with a way to get to know her better. His first idea of shopping at the store where she worked had backfired. He’d spent the better part of an hour gathering some items to purchase. But while she rang him up, he saw the glazed look in her eyes that he’d come to recognize as the barrier between the classes. And it broke his heart.

“Turn right at the next road,” Lillian instructed, snapping him from his thoughts.

She turned and gave him a questioning glance. Her long, dark eyelashes framed what he remembered as being light blue-gray eyes that twinkled when she talked.

“I took Merv for a spin when my family first got this automobile, and we happened to drive by your house,” he explained.

“Oh.” Lillian fidgeted with the purse in her lap.

“We went all over the place,” William continued, hoping to ease some of the discomfort he’d caused. He nervously rambled on about where he and Merv had gone that day. By the time he realized he’d monopolized the conversation, they’d reached the cottage where Lillian lived with her parents.

As they pulled to a stop, Lillian reached for the door handle. “Thank you for the ride, Mr. Tronnier.”

“Wait.” William cleared his throat. Lillian let go of the door handle and turned to face him. “I wondered… Well, I thought maybe…”

Lillian’s forehead crinkled. “Did you need something?” She tilted her head and pursed her lips.

“Would you like to do something with me sometime?”

William shrugged. “I don’t know. Perhaps I can take you for a ride in my automobile.”

The corners of her lips twitched, as though she might be repressing a smile. “You already have, Mr. Tronnier, and I thank you for it. Between the rain and my aching feet, I have to admit, I dreaded the walk home.” She got out and leaned over to look him in the eyes. “Thank you again for your generosity.”

He exhaled slowly and nodded. “You’re quite welcome, Miss Pickard. Have a nice evening.”

As William drove away, he wanted to kick himself. One thing he’d been known for, besides being the son of a wealthy farmer, was his way with words—and now those words had escaped him.

“Lillian, did I just see you getting out of an automobile?” her mama asked. Before giving Lillian a chance to answer, she shook her head and clucked her tongue. “It’s not a good idea to take rides from people you don’t know.”

Mama lifted her eyebrows. “You know someone with an automobile? Or do you just know
of
him?”

“That was William Tronnier.” Lillian paused when her mother pulled back in surprise. “I met him at the Jordans’ Christmas party last year.”

“Honey, I know who the Tronniers are, and they’re out of our league. I hope you don’t—”

Lillian lifted a hand to stop Mama from continuing. “It was just a ride, Mama. It was raining, and my feet were killing me. Mr. Tronnier took pity on me and offered me a ride.”

Myriad emotions slid across her mama’s face—first a tad of disappointment that transformed to acceptance and finally satisfaction. “As long as you don’t forget who you are and where you stand in society, you’ll be fine.”

“Yes, I know, Mama.” She headed toward her bedroom. “I’ll help set the table after I put my things away.”

Lillian stood in front of the scratched mirror that rested atop her equally distressed dresser. Rain and unruly hair were a bad mix. Frizzy ringlets drooped over her shoulders, and her feeble attempt at dressing stylishly clung to her in unkempt folds. Knowing who she was and where she stood in society wasn’t difficult, considering what a mess she was. Mr. Tronnier was definitely a nice man, but the tiny tingle of attraction she’d felt when he helped her into his automobile needed to be tempered with reality.

She changed into some dry clothes and flat shoes before joining her parents in the small dining nook between the kitchen and living room. Mama had put food on the plates rather than in serving bowls because the small table was already overcrowded. As soon as she was seated, Daddy took her hand to say the blessing.