Low Carb for the Holidays 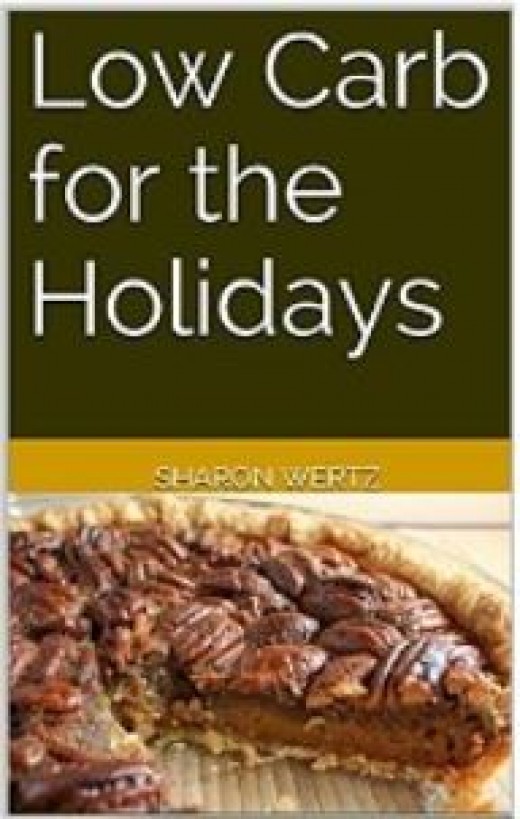 Low Carb for the Holidays

Holiday Recipes plus a dozen recipes for all those
Leftovers!

Low Carb for the Holidays Copyright ©2014 by Sharon
Wertz. All rights reserved. Printed in the United States of
America. No part of this book may be used or reproduced in any
manner whatsoever without written permission except in the case of
brief quotations embodied in critical articles and reviews. For
information address:

For more delicious low carb recipes see my full
cookbook, available as an eBook or a paperback at Amazon and other
fine booksellers.

My husband is an insulin dependent diabetic, and I am
insulin resistant hypoglycemic. We have been eating low carb for
more than 20 years. He has lost almost a hundred pounds since first
being diagnosed with diabetes, and his blood sugar is now under
excellent control. We discovered that the standard “diabetic diet”
didn’t work for either of us. For a while we followed the Atkins
diet, and later we developed our own way of eating that works for
us.

Now it isn’t a diet…it is a way of life. I have
managed to convert almost all of our old familiar “comfort foods”
to low carb.

If you have any questions, feel free to email me at
[email protected]

Almost all the ingredients for recipes in this book
that cannot be found in your local supermarket are available online
from NETRITION.COM. I have no connection with NETRITION.COM, but
they are where I have purchased most of my low carb ingredients for
many years, mostly because of their large selection and low
shipping cost. You may have another favorite source for
ingredients

Everyone knows you can lose weight on a low carb
diet. However, many people eventually gain the weight back! Why?
Most people simply cannot face the idea of eating such a limited
diet for the rest of their lives!

Carbs begin to creep back into the diet. And if you
don't keep the carbs below your own personal tolerance level, a low
carb diet becomes a weigh GAINING diet because by definition low
carb is high fat and high calorie. If your body drops out of fat
burning mode and back into carb burning mode, you WILL gain
weight.

In order to be successful at keeping the weight off,
you have to have a diet that you can live with without feeling
deprived. That is why I have spent so many years in developing
recipes that duplicate the "comfort foods" we all grew up with and
love.

These are not fancy recipes. Most are easy to make.
Some are my grandmother’s recipes, adapted to low carb. Some came
from my New England husband’s grandmother. Most I made up from
scratch. I hope you find them useful and satisfying.

There are many different artificial sweeteners on the
market. These recipes can be made with any of them. My sweetener of
choice is liquid sucralose, which is zero carbs. Powdered Splenda,
Equal, etc. contain about 24 grams of carbs per cup of sugar
equivalent because of the dextrose used to make up the powder that
carries the sweetener. Liquid sucralose or other liquid artificial
sweeteners avoid the extra carbs in the powdered sweeteners. Stevia
is another popular sweetener available in both liquid and powdered
form.

Sugar alcohols, such as malitol and erythritol are
also available, but can cause intestinal distress in sensitive
individuals. Use them with caution until you find out if they upset
your system. In general, erythritol is less likely to cause
problems than are the other sugar alcohols, but they can all have a
laxative effect on some people, or if consumed in excess. Malitol
will caramelize like sugar, and can be cooked to soft crack and
hard crack stages. (If you have dogs, avoid xylitol…it is highly
poisonous to dogs.) For brown sugar substitutes, use malitol brown
or Natural Sweet Brown.
Warning
: Splenda Brown is half real
sugar!

If you can't find the brown sugar substitute, you can
use any artificial sweetener and add one teaspoon of blackstrap
molasses to the recipe. The blackstrap molasses has a very strong
flavor and one teaspoon will flavor a cup of artificial sweetener
to taste like brown sugar while only adding 4 grams of carbohydrate
to the whole recipe. Be sure it is
blackstrap
molasses. It
is much stronger flavored than regular molasses. A teaspoon of
blackstrap molasses will give as much flavor as an ounce of regular
molasses.

Another ingredient I use a lot is polydextrose
(polyD.) It is classified as a fiber by the FDA. Unlike other
fiber, however, it has the cooking characteristics of sugar. You
can cook it to soft ball to make caramels. You can cook it to hard
crack to make hard candies and peanut brittle. It keeps baked goods
moist, and adds "chewiness" to brownies. It makes foods made from
Carbquik less crumbly. It is slightly sweet…about 10 percent as
sweet as sugar, so you need to add sweetener in addition to the
polyD in sweet recipes.

Sugar free pancake syrup can be used in recipes to
replace corn syrup or honey. Sugar free honey is also available. It
is actually a honey flavored malitol syrup.

Tova Industries’ Carbquik and Carbalose flour are
also staples in my kitchen. Carbquik is basically a low carb
biscuit mix similar to Bisquick. It has 2 grams net carb per
serving, and 14 grams of fiber. You can basically take almost any
Bisquick recipe and convert it to low carb using Carbquik.
Carbalose is the flour used in Carbquik. Use it when you don’t want
the baking powder and fat that are in the Carbquik. It is one of
the flours used in making low carb pasta.

Nuts and nut meals are used in many baked goods and
breads to add texture, flavor and body to many recipes. You can buy
almond meal in most grocery stores, (Bob’s Red Mill is a well known
brand,) or you can grind it yourself in a blender or food
processor. I use pecan and walnut meal most often, since they are
lower carb than almond meal. Pecan meal has the lowest carb
count.

Flax seeds are used both whole and ground into meal
in many recipes. I recommend golden flax rather than brown flax
because of its mild nutty flavor. You can grind your own seeds in a
blender, or buy flax meal already ground. Keep it in the
refrigerator or freezer, since it goes rancid at room
temperature.

I make my own low carb pasta, but if you don’t want
to make it you can use a tofu/shirataki noodle blend made by House
Foods. (Use their spaghetti to make faux rice.) You can get it
online or at an Asian market. Some supermarkets are carrying it
now, and it is available at Sprouts markets. Look for it near the
tofu. It comes in angel hair, fettuccine, spaghetti and macaroni
shapes, and has less than 2 grams of carb per serving. As with any
shirataki noodle, be sure to rinse it thoroughly, since the
solution they pack it in has a distinctly fishy smell that
disappears when well rinsed under running water. To prevent
watering down sauces, put it in the microwave for 2 minutes before
adding it to your recipes. This will evaporate out excess
water.

For thickening sauces and gravies, I prefer
glucomannan (also called konjac) powder. It is the powder that
shirataki noodles are made from. It is available online or at some
health food stores. Use it like you would use flour or cornstarch
for thickening sauces, (but it just takes a tiny bit!) I keep a
salt shaker by the stove and shake a tiny bit into sauces and
gravies to thicken them.

Wheat protein isolate 5000 is a flour substitute. It
is wheat flour that has had the carbohydrate and fat removed,
leaving only the protein. It is a key ingredient in home made low
carb pasta.

Some recipes call for low carb breadcrumbs. If you
don’t make your own bread, use a low carb tortilla. Run it in a
blender or food processor until it is cut into fine crumbs.

Avocado Oil has all the health benefits of olive oil,
but has a milder taste and a very high smoke point for frying. It
is much lower than canola oil in Omega 6 fatty acids.

For pie crust, I make my own but if you want a
mix, , I like the Dixie Diner Press and Bake Pie Crust mix from
NETRITION.COM. It is easy to make and tastes pretty much like real
pie crust.

Waldon Farms makes several very good salad dressings.
In particular, their Honey Mustard, Sesame Ginger and Asian
dressings are excellent. They are available in the diet foods
section of many supermarkets, as well as online. Sprouts also
carries them.

Torani and DaVinci both make sugar free syrups in
many different flavors. They are available online, or at such
stores as Smart and Final, Cost Plus, and Costco. In addition to
flavoring beverages, the caramel syrup adds a “brown sugar” flavor
to recipes. The fruit flavors are great for flavoring muffins and
desserts.

Carbmaster yogurt is 4g carbs per container. It is a
Kroger house brand.

I prefer Hershey’s Special Dark cocoa powder over
other types because it gives an intense chocolate flavor with less
cocoa, saving on carbs.

Campbell's Chicken and Mushroom Soup is a low carb
substitute for gravy or white sauce. It is lower in carbs than
regular mushroom soup or cream of chicken soup. A whole can is 12g
carbs compared to 23g carbs in the others. In a recipe that serves
4 it adds 3g carbs per serving.

For milk substitutes, I use a mixture of half cream
and half water, or unsweetened almond milk. I am allergic to
coconut, so I don’t use coconut milk or flour in my recipes. You
could also use soymilk if you prefer. If you live in an area where
you can get Hood Calorie Countdown milk, that is also good, but it
is not available in Arizona.

EAS Whey Protein Powder is my favorite because it is
the lowest in carbs that I have found, and it has a good flavor. I
use both the chocolate and vanilla powder. It is especially useful
in baked goods made with Carbquik because they tend to be crumbly
without the protein powder. It improves the texture of the finished
baked goods.

LaNouba makes an excellent sugar free marshmallow
that can be used like regular marshmallows. They are pretty much
carb free (0.01g carbs per large marshmallow) and are available
from Netrition.com

HOLIDAY STAPLES
It just wouldn’t be the holidays without
these!
Cranberry sauce

Artificial sweetener equivalent to 1 cup sugar (I use
liquid sucralose)

Put all ingredients into a sauce pan and bring to a
boil. Simmer 10 minutes.

This makes 2 pints at 18g carbs per pint, a little
over 1g carbs per 2 tbsp serving if made with liquid sucralose.

You can add a little grated orange peel, orange
extract, or Torani or DaVinci orange syrup and a sprinkle of cloves
and cinnamon to make a spiced cranberry-orange relish.

Made You Up by Francesca Zappia
The Jacobs Project: In Search of Pinocchio (SYMBIOSIS) by King, Samuel
Just Like a Man by Elizabeth Bevarly
Worshipped (Worshipped Series Book 1) by Paisley, Brie
Bedding The Baron by Alexandra Ivy
High Horse by Bonnie Bryant
The Garden of Stars by Zoe Chamberlain
Alien Desire: A sci-fi contemporary menage romance (Stargazers Book 2) by Thalia Frost
The Dreaming Hunt by Cindy Dees
The Syndicate by Shelena Shorts