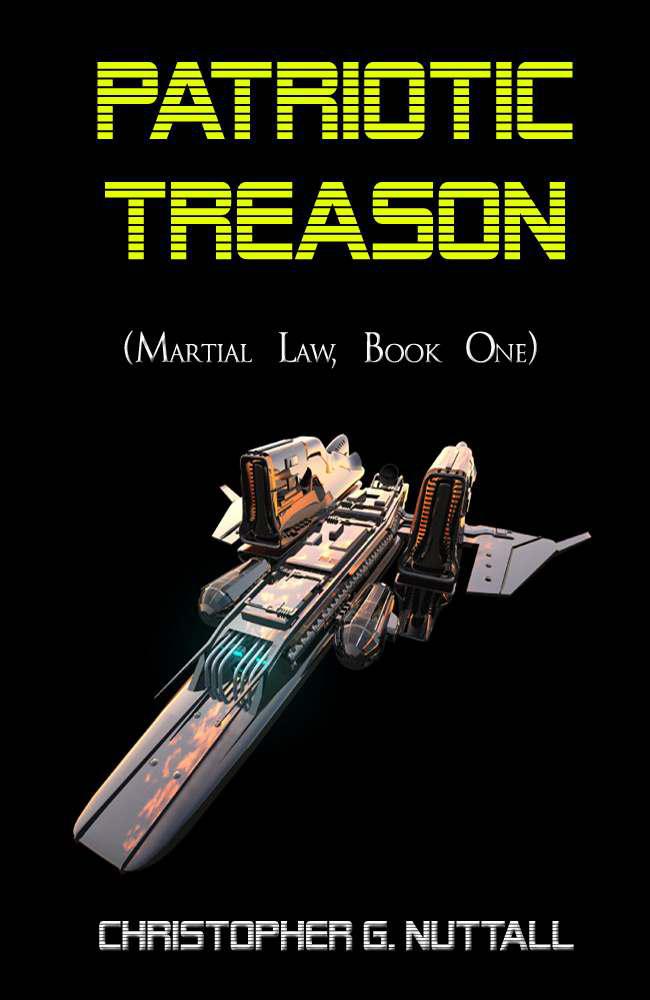 This ebook is licensed for your personal enjoyment only. It may not be re-sold or given away to other people. If you would like to share this book with another person, please purchase an additional copy for each person. If you’re reading this book and did not purchase it, or it was not purchased for your use only, then please purchase your own copy. Thank you for respecting the hard work of this author.

We have seen in the preceding chapters how the factors of improved access to space, growing ethnic and international conflict and endless Wrecker attacks led to the exodus of human industry to the solar system, where safety could be guaranteed. The construction of the first orbital towers, the development of fusion power and – not coincidentally – ever-harsher regulations on Earth ensured that the space-based communities would lose most of their loyalty to Earth. The development of the Jump Drive by Professor Kratman in 2156 merely cemented that trend.

The first viable extra-solar colony world was discovered in 2157 and settled under the auspices of the UN. The land was shared out among interested groups who could afford space on the first colony ships – and the vast bribes paid to various UN bureaucrats – and those who were victims of ‘historical oppression.’ The result, for reasons that will be examined later, was a catastrophe of the first order. The next seventeen worlds to be settled by the human race were established by various nation-states – America, Britain, China, France, Russia and many others – and immigration quotas were firmly centred on those who could fit in. Although this policy was regarded – not entirely without reason – as racist, the UN was unable to counter it, as national armed forces were still a significant power. Other worlds, including Heinlein, Balboa and Williamson’s World, were settled according to a political ideal, or by corporate interests. By 2200, there were nearly one hundred and eighty worlds settled by the human race, with an ever-growing sphere of exploration and secret settlement.

The unintended consequence of this development was that it allowed the UN to consolidate its power on Earth and, later, throughout the solar system. There had always been a trend towards transnational institutions and this only accelerated as nationalists or patriots emigrated from their countries to newer pastures. As the UN tightened its grip, the United Nations Peace Force became the dominant military power of the world and national armed forces were either disarmed or encouraged to depart to the outer worlds. The growing social collapse over much of Earth – and resentment among the so-called Third World for years of semi-imaginary offences committed by the richer nations – only encouraged further emigration. In short, the UN’s bid for global power had succeeded itself to death. It had inherited a still-breathing corpse.

This was not immediately appreciated by the UN General Assembly, or the bureaucrats, who were by that time the real rulers of the planet. It became staggeringly clear when attempts to settle newer worlds based on past historical grievances tended to fail spectacularly. Worse, Earth’s production system was falling apart – by now, the planet was completely dependent on imported goods from the solar system – and the planet’s population was eating itself to death. The UN had either driven away or killed the men and women who could have solved the problems, and compounded their crimes by making it impossible for new ones to appear.

It was a problem that required a firm grasp of reality and ruthless measures to survive, all of which were politically impossible. Instead, the UN looked for another answer. It had always claimed jurisdiction over the extra-solar planets, the bureaucrats reasoned, and surely it was right for them to aid Earth in her hour of greatest need. The one element of the UN that had continued to work fairly well, insofar as anything worked fairly well, was the military arm, which had been confronted with endless rebellions on Earth against UN authority. The Generals drew up a plan, dispatched the fleet, and sat back, fully expecting victory and loot for Earth’s starved economy.

The plan didn’t go exactly as they had predicted.

In fact, it went spectacularly wrong.

The outer worlds didn’t recognise the authority of the UN. Many of their parents and grandparents had fled the UN’s growing control over their lives. They had built their new worlds for themselves, not for the UN to loot. The resistance started almost at once and, while the UNPF was extremely powerful, rapidly became impossible to suppress quickly. The UN found itself caught up in an insurrection on a galactic scale. Victory was as distant as ever.

It was into this world that John Walker was born.

The principle requirement for an officer serving in the UNPF is political reliability; i.e. he or she is fully aware of and dedicated to the UN’s official purpose. The courses at the Peace Academy (Space Studies) are therefore largely dedicated to political indoctrination sessions, often at the expense of competency. UNPF cadets and trainees, therefore, are often brutally unprepared for the hazards of space service. At least a fifth of newly-minted Ensigns die within the first year of their active service.

“Look at her,” Ensign Roger Williamson said. “Isn’t she magnificent?”

I couldn’t help, but agree. Even docked at Orbit Seven, the largest UNPF space station orbiting Luna, UNS Jacques Delors was an impressive sight. Two hundred meters long, shaped rather like a child’s dream starship, it was painted the bright white and blue colours of the United Nations Peace Force. It bristled with weapons and sensor modules and gave the impression, somehow, of being new. We knew, of course, that it was over ten years old, but it didn’t look it. I stared, trying to drink in all the details of my new posting, the first since I – we – had graduated the Peace Academy.

“She is,” I breathed, awed. The starship just took my breath away. I glanced down at my watch-terminal and allowed myself a moment of relief. We were only seven minutes late, hardly worth worrying about. We could stay and stare at the starship for several more minutes before we walked down the docking tube and boarded her formally. “The images didn’t do her justice.”

“You never said a truer word, John,” Roger said. “Muna, what do you think?”

“I think I’m glad to have made it through the Academy,” Muna said, flatly. Ensign Muna Mohammad, for reasons I never fully understood, had almost failed the Academy and nearly been sent home in disgrace. “I also think that we should hurry up and board her.”

Roger snorted. “There’s no need to rush,” he assured her. “The Captain won’t leave us behind, I’m sure.”

Ensign Rolf Lommerde coughed. “For those of us who do not have highly-placed relations,” he said, “it is rather less easy to be sure of our own safety.”

“I know,” Roger said, seriously. He was an alright type really, despite his family’s connections in the vast UN bureaucracy that ran the United Nations. He’d certainly never traded on them to get better treatment from our instructors back at the Academy. “Sally? Ellen? Should we go…?”

“Yeah,” Ellen said. She picked up her carryall with a sigh. “We want to make a good impression, don’t we?”

Roger led the way down to the docking tube, which was guarded by a pair of armed and armoured Marines. I studied them with interest as Roger explained who we were; their armour, I had been assured, could stand off either bullets or laser beams. They both looked tough and scarred from the wars; indeed, it took me several minutes to realise that one of them was actually female. I wouldn’t have dared try to chat her up in a bar, had I known that she was a Marine. The Marines had a reputation for being utterly unforgiving in a fight.

“You may pass,” one of the Marines said, finally. He seemed to exchange a glance with his comrade. When he spoke, it was in a grave voice that somehow seemed to hold a vast amount of amusement. “I hope you enjoy your time on the ship.”

I didn’t understand why, but I could have sworn I felt a chill run down my neck as he spoke. Roger ignored it, if he noticed it, and led us down the long docking tube towards the starship’s main airlock. I felt myself tensing again and not just because of the fact we were about to set foot on a starship for the first time. The docking tubes were supposed to be perfectly safe, but I had heard whispers of accidents that had left unprotected victims dumped into space, killed almost instantly before they could save themselves. The course on surviving in a vacuum at the Academy had been almost painfully blunt.

“This assumes that you will be near a set of emergency supplies,” Instructor Patel had informed us, glaring around the class with his single eye. No one knew how he’d lost the other one. “If not, you’re dead. Bend over and kiss your ass goodbye.”

We hadn’t taken the time to study the diagrams of the starship that had been included with our orders, but we weren’t surprised when the docking tube opened into a small reception area, with a single UN flag at the rear of the chamber. I barely noticed it. All of my attention was taken, at once, by the woman waiting for us at the end of the docking tube. I took one look at her and knew, exactly, what the Marines had found so funny. They’d known that the dragon was waiting for us.

“And what time,” she demanded, “do you call this?”

She looked tough. She might have been attractive when she had been younger, but years of living and working in space had evidently taken a toll. I met her blue eyes for a long moment and then found myself looking away. I couldn’t bear to look at her. She was looking at us as if we were something she’d scraped off her shoes, or perhaps a mess a dog had left on her clean floors...and no one had ever looked at us like that before. I felt about a centimetre tall, perhaps smaller. I hadn’t felt so small since my grandfather had caught me with a girl I’d known when I’d been fourteen.

“Ah…1309,” Roger stammered. He was clearly as caught out as I was. “We were ordered to report onboard and…”