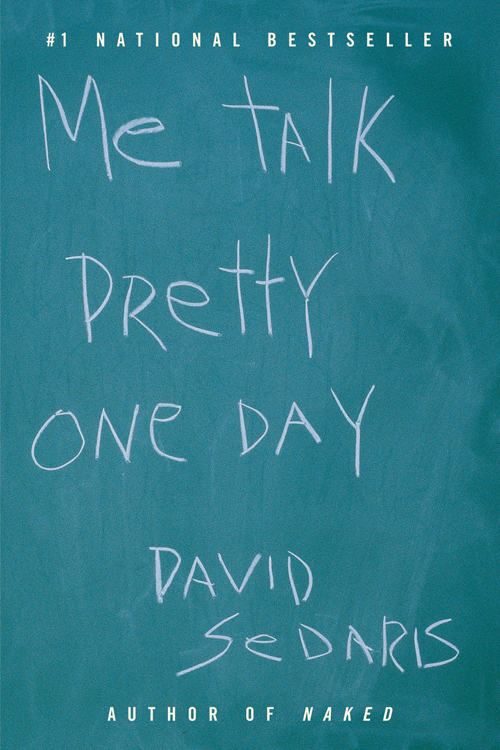 Back Bay Books is an imprint of Little, Brown and Company. The Back Bay Books name and logo are trademarks of Hachette Book
Group, Inc.

Acknowledgment is made to the following, in which various forms of this book’s pieces first appeared: New Yorker: “Genetic
Engineering” • Esquire: “You Can’t Kill the Rooster,” “The Youth in Asia,” “A Shiner Like a Diamond,” “Big Boy,” “Me Talk
Pretty One Day,” “Jesus Shaves,” “I’ll Eat What He’s Wearing,” “Smart Guy” • “This American Life”: “Giant Dreams, Midget Abilities,”
“Twelve Moments in the Life of the Artist” • BBC Radio 4: “The Great Leap Forward,” “Today’s Special,” “City of Angels,” “The
Tapeworm Is In.”

Twelve Moments in the Life of the Artist

You Can’t Kill the Rooster

The Youth in Asia

The Tapeworm Is In

Make That a Double

Remembering My Childhood on the Continent of Africa

The City of Light in the Dark

I Pledge Allegiance to the Bag

I Almost Saw This Girl Get Killed

“His most sidesplitting work to date. The stories chronicling Sedaris’s time in Paris are painfully funny fish-out-of-water
tales about the difficulty of learning the language and the near-impossibility of translating the culture.… The simple, effortless
comic build of these stories had me howling in the airport, my hands shaking, my eyes glistening with tears.”

“Hilarious and insightful.… Mr. Sedaris may not talk pretty, but he does write funny.”

“Arguably one of the funniest writers working today.… Sedaris’s humor is based on a writer’s best friend: droll, descriptive
storytelling.”

“Pure pleasure.… The pieces that deal with Sedaris’s fumbling efforts to learn French in Paris as a newly installed ‘ex-pat’
are among his funniest ever.”

“Sedaris’s best vignettes are completely engaging.… He makes you laugh out loud.”

“Hilarious.… Sedaris has the ability to seem constantly surrounded by surreal events and situations.… The book is laugh-out-loud
funny, witty, trenchant, and over far too soon.”

“David Sedaris has one of the most shameless, acid, vaulting wits on planet earth.… Each essay is a delight.”

“A student of American letters and literature would probably herald Sedaris as a modern-day Mark Twain.… Each chapter is an
essay that will put a grin on your face.”

“Mr. Sedaris’s peculiar genius lies in his ability to transform the mortification of everyday life into wildly entertaining
art.”

“Sedaris is funny, smart, and wickedly observant.… Take
Me Talk Pretty One Day
somewhere where you can laugh unabashed, or better, where you can read your favorite parts out loud.”

“What a wonderful storyteller Sedaris is.… His writing embodies the softened bite of Dorothy Parker, the highbrow sarcasm
of Fran Lebowitz, and the social commentary of Oscar Wilde.”

“There is no contemporary writer as reliably funny as David Sedaris. His best humor seems to come from the same place as —
dare I think it? — Mark Twain’s. It’s dark and suffering, extremely caustic, skillfully exaggerated, but recognizably true.”

“David Sedaris is our generation’s James Thurber, Dorothy Parker, Fran Lebowitz, Woody Allen, and Mark Twain wrapped in a
compact package with a pixie’s voice. He’s a treasure to behold.”

“Sedaris is a master at turning his life experiences into witty vignettes that both entertain and comment on the human condition.”

“Sedaris catalogs his foibles in a way that, while wildly funny, is also moving.”

“David Sedaris is seriously funny. In
Me Talk Pretty One Day
he again accomplishes the cliché: He makes you laugh and he makes you cry. Sometimes both at once.”

“Sedaris’s irresistibly funny travel essays, reminiscences, and diary entries hit with an almost physical wallop.… With a
sharpshooter’s eye for detail, he writes about his experiences in a way that inspires a shock of recognition. … It may take
Sedaris more practice to talk pretty, but he writes gorgeous.”

“A writer who is capable of being not only funny, but touching, even tender, too.… David Sedaris is part Walter Mitty, part
Garry Shandling, part Andy Rooney, with a little bit of Oscar Wilde thrown in for good measure; a campy commentator on the
absurdities of contemporary life.”

“The poignancy is palpable here… so that we are curled up laughing while we read but also deeply affected by all that hides
between the lines.… It’s classic Sedaris, making us laugh, making us care. Making us more human through his humor.”

“Sedaris is Garrison Keillor’s evil twin: like the Minnesota humorist, Sedaris focuses on the icy patches that mar life’s
sidewalk, though the ice in his work is much more slippery and the falls much more spectacularly funny.”

“Sidesplitting.…
Me Talk Pretty One Day
fits loosely into the tradition pioneered by those literary wags of an earlier era, like S. J. Perelman and Robert Benchley,
who spun their random observations into epically loopy fantasias.… Sedaris, too, examines the ridiculousness of those around
him, but he does it with affectionate curiosity and not a jot of shame about his own mischievous weirdness.”

“David Sedaris has gone to the well of pain and come back repeatedly with heart-tugging tales that would have readers in tears
if they weren’t so busy laughing.”

“Hilarious.… These stories are gems of wit and intimacy.… Whether you listen to a Sedaris story or read one, the effect is
blissfully, elegantly funny.… Sedaris uncovers what makes everyday life amusing enough to keep us living it.”

“It’s all hilarious.… Listen to me: you have
got
to read David Sedaris. He just might be the funniest writer in North America.”

For my father, Lou

A
NYONE WHO WATCHES EVEN THE SLIGHTEST
amount of TV is familiar with the scene: An agent knocks on the door of some seemingly ordinary home or office. The door
opens, and the person holding the knob is asked to identify himself. The agent then says, “I’m going to ask you to come with
me.”

They’re always remarkably calm, these agents. If asked “Why do I need to go anywhere with you?” they’ll straighten their shirt
cuffs or idly brush stray hairs from the sleeves of their sport coats and say, “Oh, I think we both know why.”

The suspect then chooses between doing things the hard way and doing things the easy way, and the scene ends with either gunfire
or the gentlemanly application of handcuffs. Occasionally it’s a case of mistaken identity, but most often the suspect knows
exactly why he’s being taken. It seems he’s been expecting this to happen. The anticipation has ruled his life, and now, finally,
the wait is over. You’re sometimes led to believe that this person is actually relieved, but I’ve never bought it. Though
it probably has its moments, the average day spent in hiding is bound to beat the average day spent in prison. When it comes
time to decide who gets the bottom bunk, I think anyone would agree that there’s a lot to be said for doing things the hard
way.

The agent came for me during a geography lesson. She entered the room and nodded at my fifth-grade teacher, who stood frowning
at a map of Europe. What would needle me later was the realization that this had all been prearranged. My capture had been
scheduled to go down at exactly 2:30 on a Thursday afternoon. The agent would be wearing a dung-colored blazer over a red
knit turtleneck, her heels sensibly low in case the suspect should attempt a quick getaway.

“David,” the teacher said, “this is Miss Samson, and she’d like you to go with her now.”

No one else had been called, so why me? I ran down a list of recent crimes, looking for a conviction that might stick. Setting
fire to a reportedly flameproof Halloween costume, stealing a set of barbecue tongs from an unguarded patio, altering the
word hit on a list of rules posted on the gymnasium door; never did it occur to me that I might be innocent.

“You might want to take your books with you,” the teacher said. “And your jacket. You probably won’t be back before the bell
rings.”

Though she seemed old at the time, the agent was most likely fresh out of college. She walked beside me and asked what appeared
to be an innocent and unrelated question: “So, which do you like better, State or Carolina?”

She was referring to the athletic rivalry between the Triangle area’s two largest universities. Those who cared about such
things tended to express their allegiance by wearing either Tar Heel powder blue, or Wolf Pack red, two colors that managed
to look good on no one. The question of team preference was common in our part of North Carolina, and the answer supposedly
spoke volumes about the kind of person you either were or hoped to become. I had no interest in football or basketball but
had learned it was best to pretend otherwise. If a boy didn’t care for barbecued chicken or potato chips, people would accept
it as a matter of personal taste, saying, “Oh well, I guess it takes all kinds.” You could turn up your nose at the president
or Coke or even God, but there were names for boys who didn’t like sports. When the subject came up, I found it best to ask
which team my questioner preferred. Then I’d say, “Really? Me, too!”

Asked by the agent which team I supported, I took my cue from her red turtleneck and told her that I was for State. “Definitely
State. State all the way.”

It was an answer I would regret for years to come.

“State, did you say?” the agent asked.

“I see.” She led me through an unmarked door near the principal’s office, into a small, windowless room furnished with two
facing desks. It was the kind of room where you’d grill someone until they snapped, the kind frequently painted so as to cover
the bloodstains. She gestured toward what was to become my regular seat, then continued her line of questioning.