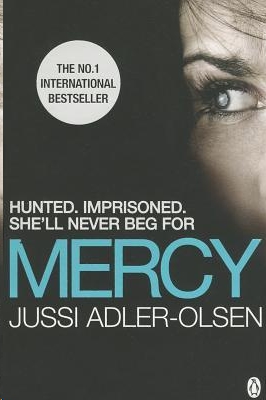 Jussi Adler-Olsen was born in Copenhagen and worked as a magazine editor and publisher before starting to write fiction.
Mercy
is the first of four novels in the Department Q series. He holds the prestigious Glass Key Award, given annually for a crime novel by a Scandinavian author, and in 2011 also won the Golden Laurels, Denmark’s highest literary accolade, awarded by the Danish book trade. Visit Jussi Adler-Olsen’s website at
www.jussiadlerolsen.dk
.

This translation first published in Great Britain by Penguin Books 2011

The moral right of the author and translator has been asserted

Dedicated to Hanne Adler-Olsen. Without her, the well would run dry.

She scratched her fingertips on the smooth walls until they bled, and pounded her fists on the thick panes until she could no longer feel her hands. At least ten times she had fumbled her way to the steel door and stuck her fingernails in the crack to try to pry it open, but the door could not be budged, and the edge was sharp.

Finally, when her nails started pulling away from the flesh of her fingers, she tumbled back on to the ice-cold floor, breathing hard. For a moment she stared into the thundering darkness, her eyes open wide and her heart hammering. Then she screamed. Screamed until her ears were ringing and her voice gave out.

She leaned her head back and again felt the fresh air streaming down from the ceiling. Maybe she could jump up there if she got a running start and then grabbed hold of something. Maybe then something would happen.

Yes, then maybe those bastards outside would have to come in.

For a moment she sucked on her bleeding fingers, then pressed them against the floor and sat up.

Blindly she stared up at the ceiling. Maybe it was too far to jump. Maybe there was nothing for her to grab. But she had to give it a try. What else could she do?

She took off her jacket and carefully placed it in a corner so she wouldn’t trip over it. Then in one bound she leaped off the floor, stretching her arms in the air as high as she could, but she touched nothing. She did it a couple more times before retreating to the far wall, where she paused for a moment to collect herself. Then she took a running start, and with all her might jumped into the darkness, her arms flailing after hope. When she crashed back down, her foot slipped on the smooth floor and her body landed on its side. She gasped loudly as her shoulder struck the concrete, and she screamed when her head smashed against the wall, slamming her brain full of flashes of light.

For a long time she lay very still, wanting only to cry. But she didn’t. If her prison guards heard her, they’d take it the wrong way. They would think she was on the verge of giving up, but she wasn’t. On the contrary.

She was going to look after herself. For them she was the woman in the cage, but she was the one who decided how far apart the bars would be. She would think thoughts that opened out on to the world and kept madness at bay. They would never break her. That’s what she decided as she lay there on the floor, her shoulder throbbing fiercely and the swelling around her eye forcing it closed.

Someday she would get out of here.

Carl took a step towards the mirror and ran one finger along his temple where the bullet had grazed his head. The wound had healed, but the scar was clearly visible under his hair, if anyone cared to look.

But who the hell would want to do that? he thought as he studied his face.

It was obvious now that he had changed. The furrows around his mouth were deeper, the shadows under his eyes were darker, and his expression showed a profound indifference. Carl Mørck was no longer himself, the experienced criminal detective who lived and breathed for his work. No longer the tall, elegant man from Jutland who caused eyebrows to raise and lips to part. And what the hell did it matter anyway?

He buttoned his shirt, put on his jacket, tossed down the last dregs of his coffee and slammed the front door behind him, so that the other residents of the house would realize it was time to haul themselves out of bed. His gaze fell to the nameplate on the door. It was about time he changed it. It had been a long time since Vigga moved out. Even though they weren’t yet divorced, it was definitely over.

He turned around and set off for Hestestien. If he caught the train in twenty minutes, he’d be able to spend a good half-hour with Hardy at the hospital before he had to head over to police headquarters.

He saw the red-brick church tower looming above the bare trees and tried to remind himself how lucky he’d been, in spite of everything. Only an inch to the right and Anker would still be alive. Only half an inch to the left, and he himself would have been killed. Capricious inches that had spared him a trip along the green fields to the cold graves a few hundred yards in front of him.

Carl had tried to understand, but it wasn’t easy. He didn’t know much about death. Only that it could be as unpredictable as a lightning bolt and infinitely quiet after it arrived.

On the other hand, he knew everything about how violent and pointless it could be to die. That much he really did know.

He was only a couple of weeks out of the police academy when the sight of his first murder victim had been burned permanently on to Carl’s retina. A small, slight woman who had been strangled by her husband and ended up lying on the floor with dull eyes and an expression that had left Carl feeling sick for weeks afterwards. Since then, scores of cases had followed. Each morning he had prepared himself to face it all. The bloody clothes, the waxen faces, the frozen photos. Every day he’d listened to people’s lies and excuses. Every day a crime in a new guise, gradually making less and less of an impact on him. Twenty-five years on the police force and ten in the homicide division had hardened him.

That’s how things had gone until the day when a murder case pierced his armour.

They had sent him and Anker and Hardy out to a decrepit barracks on a worn, dirt road where a corpse was waiting to tell its own unique story.

As so often before, it had been the stench that prompted a neighbour to react. The victim was just a recluse who had lain down peacefully in his own filth and exhaled his last alcoholic fumes. Or so they thought, until they discovered the nail from a nail gun lodged halfway in his skull. That was the reason the homicide division had been called in.

On that particular day it was Carl’s team’s turn to respond, which was OK with him and his two assistants, even though Carl griped as usual about being overworked and how the other teams were slacking off. But who could have known how fateful this call would turn out to be? Or that only five minutes would pass from the time they entered the room with the reeking corpse until Anker lay on the floor in a pool of blood, Hardy had taken his last steps, and the fire inside Carl had been extinguished – the flame that was absolutely essential for a detective in the homicide division of the Copenhagen Police.

The tabloids loved everything about the Democrats’ vice-chairperson, Merete Lynggaard, and everything she stood for. Her sharp comments at the podium in the Folketing, the Danish parliament. Her lack of respect for the prime minister and his yes-men. Her feminine attributes, mischievous eyes and seductive dimples. They loved her for her youth and success, but above all they loved her for the fodder she gave to speculations about why such a talented and beautiful woman had still not appeared in public with a man.

Merete Lynggaard sold a hell of a lot of newspapers. Lesbian or not, she was truly great material.

And Merete was fully aware of this.

‘Why don’t you go out with Tage Baggesen?’ her secretary urged, as they headed for Merete’s small blue Audi, avoiding the puddles forming in the Christiansborg car park, which was reserved for members of parliament. ‘I know there are plenty of men who’d like to take you out on the town, but he’s completely crazy about you. How many times has he tried to ask you out? Have you even counted how many messages he’s left on your desk? In fact, he left one today. Just give him a chance, Merete.’

‘Why don’t
you
date him?’ Merete glanced down as she dumped a pile of folders on to the back seat of her car. ‘What am I supposed to do with someone who’s chair of the Traffic Committee and also a member of the Radical Centre Party? Can you tell me that, Marianne? What am I? Some sort of traffic roundabout in the provinces?’

Merete raised her eyes to look over at the Royal Arsenal Museum, where a man in a white trench coat was photographing the building. Did he just snap a picture of her? She shook her head. The feeling of being watched had begun to annoy her. Of course it was sheer paranoia. She really needed to relax.

‘Tage Baggesen is thirty-five years old and he’s fucking gorgeous,’ said Marianne. ‘Well, OK, maybe he could stand to lose a few pounds, but on the other hand he owns a country house in Vejby. Plus a couple of others over in Jutland, I think. What more could you want?’

Merete shook her head sceptically. ‘Right. He’s thirty-five years old and lives with his mother. You know what, Marianne? You should take him yourself. You’ve been acting really strange lately. Take him. Be my guest!’

She grabbed all the folders her secretary was holding and flung them on to the seat with the others. The time on the dashboard clock was 17:30. She was already late.

‘Your voice will be missed in the Folketing this evening, Merete.’

‘I suppose,’ she said with a shrug. Ever since she’d entered politics, there had been a firm agreement between herself and the chairman of the Democrats that after six p.m., her time was her own, unless it was a matter of crucial committee work or a vote. ‘Not a problem,’ he’d told her back then, fully aware of how many votes she pulled in. So it shouldn’t be a problem now, either.

‘Come on, Merete. Tell me what you’ve got planned.’ Her secretary tilted her head. ‘What’s his name?’

Merete gave her a quick smile and slammed the door. It was about time she found a replacement for Marianne Koch.

The Dog that Dumped on my Doona by Barry Jonsberg
In a Fix by Linda Grimes
Moonsteed by Manda Benson
Glamorama by Bret Easton Ellis
Raven Walks by Ginger Voight
The Threat by David Poyer
Giants by Heppner, Vaughn
What He Shields (What He Wants Book Seventeen) by Hannah Ford
Lightnings Daughter by Mary H. Herbert
Murder Is a Piece of Cake by Elaine Viets