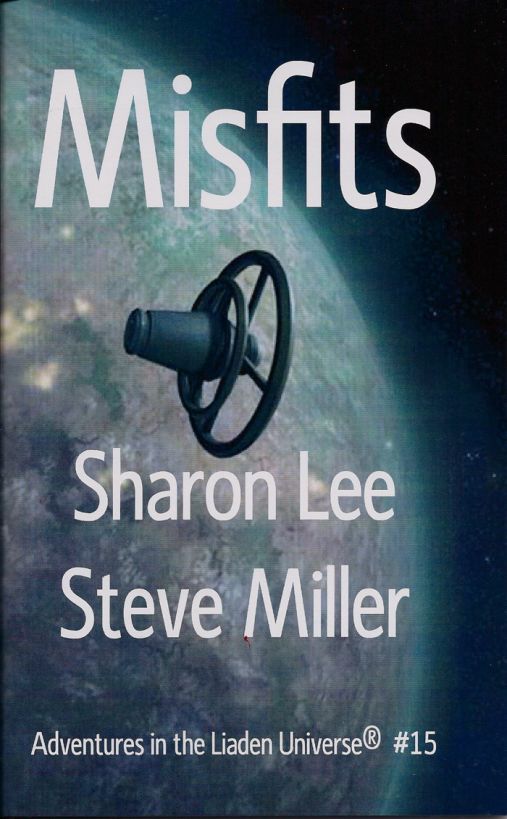 Adventures in the Liaden Universe®

This is a work of fiction. All the characters
and events portrayed in this novel are fiction or are used
fictitiously.

Copyright © 2007, 2011
by
Sharon Lee
and
Steve Miller
. All rights reserved. No part of this publication may be
reproduced or transmitted in any form or by any means, electronic
or mechanical, without permission in writing from the author.
Please remember that distributing an author's work without
permission or payment is theft; and that the authors whose works
sell best are those most likely to let us publish more of their
works.

Discover other titles by Sharon Lee, Steve
Miller, and Sharon Lee and Steve Miller at Smashwords

This ebook is licensed for your personal
enjoyment only. This ebook may not be re-sold or given away to
other people. If you would like to share this book with another
person, please purchase an additional copy fo reach recipient. If
you're reading this book and did not purchase it, or it was not
purchased for your use only, the please return to Smashwords.com
and purchase your own copy. Thank you for respecting the hard work
of this author

It was a pellucid, temperate morning. The
humidity levels were just a point lower than the theoretical
"perfect comfort" zone; the sky was an arcing blue-green bowl
marred by neither cloud nor threat of rain. It was, in fact, a fine
day for gardening.

As were so many days on Liad.

The gardener was early at his work, having
risen betimes from restless, unsettling dreams, and knowing from
long experience that laboring in the clan's inner gardens was a
potent cure for restlessness. Granted, the work no longer exhausted
him to the point of dreamlessness, for which he had only himself to
thank. Nine standards gone, the inner gardens had been a jungle of
neglect and ill-considered plantings. Now…he flattered himself that
it was an oasis, a place of peace and beauty to soothe the spirit
and calm the emotions.

To create such a place, that was certainly
valuable, he thought as he turned from the portable weather station
he had mounted on the garden wall--certainly such a place was of
value to the clan.

As he was not, nor ever had been.

An embarrassment to the clan--oh, yes. Many
times over; the transgression which had made him gardener under
what Terrans so quaintly styled "house arrest," merely the last in
the series of embarrassments that had begun with his birth and
naming.

That he was also the instrument of the
clan's continued financial comfort-- well, that was an
embarrassment, too.

He took up his hoe and walked to the bottom
of the garden, where the pesselberries wanted his attention. A
small flock of foraging redbirds flew as far as the garden wall,
complaints loud and urgent. One, braver than the rest, held
position until the gardener was nearly upon him, and then joined
his crew. Within moments their song was back to the constant low
twitter he'd become accustomed to.

It was hardly his fault that Clan Lysta had
once been on the verge of financial ruin, or that a mad Terran had
wanted a ship. Not any ship, but a good ship, a Liaden-built ship,
with up-to-date cans and mount points and drives, and-- Korval's
ships then as now being pre-bought a dozen or more years in
advance--his only choice was to buy from Cochel lo'Vanna, whose
clan refused to sell to any but a member of a registered clan.

The madman--one Thrugood Brunner--was not
without resources. He set himself to become a member of a
registered clan. He had-- perhaps by chance, perhaps by reasoned
searching-- located Lysta, teetering on the edge of dissolution. He
met with the desperate delm, an agreement was reached to publish a
new Line; a contract was written, money changed hands-- hey,
presto! as some Terrans would have it--Lysta was saved. And
Thrugood Brunner got his ship, which he soon boarded, never to
return to planet or clanhouse.

But the contract. The contract had
established a trust, a certain percentage of which was to be paid
into the clan's operating fund every Standard for precisely as long
as Line Brunner flourished in the care of Clan Lysta. This to be
proven by the existence, in each generation, of a child bearing the
surname Brunner and a personal name from the original Brunner's
family history, a list of those names being appended to the
contract.

The clan, no longer in debt, found the
contract, but not the portion, to be--awkward. By the delm's word,
the generational Brunners lived quietly retired, calling no
attention to themselves, or to the clan which nurtured them.

Until recently, that was.

He looked up and smiled as Verena rushed
down the path, trailed, as ever, by orange Charzi, tail high and
whiskers a-quiver.

"Why are you all the way down here?" the
child asked, depositing herself with abandon on the brick walk. The
cat came and stood on her knee, then wandered off, as it was wont
to do, to explore what new smells might have developed over night.
The birds quieted somewhat, but still muttered among the
branches.

"The pesselberries must have their soil
aerated, or they will not bear," he answered.

"That would be a good thing, surely?" she
asked. Verena was not fond of pesselberries.

"Not all of us share your distaste for fresh
fruits," he commented, wielding his hoe with a will.

"Not all fresh fruits," she objected.
"Ichliad, let us make a pact! You may have all of my pesselberries,
and I will have all of your kelchin fruit."

He shook his head, a Terran habit he had not
been able to break. "You know quite well that kelchin fruit are
nuts," he said. He gave her a glance. "And so do I."

She sighed, and squinted up at the sky.
"What will the weather be today?"

"Clear and calm and placid," he answered,
hoeing. "The weather on Liad is always placid."

"Excepting the occasional tempest along the
coasts, yes. We are fortunate in the weather on our homeworld.
Others are not nearly so tame."

Charzi appeared out of the bushes then and
Verena was obliged to express her admiration of his beauty and
prowess for the next few minutes. Ichliad plied his hoe, the rhythm
of the work lulling him into a state almost of sleep--and was
roused by the child.

"Ichliad," she asked, "will you go back to
being a weatherman, when the delm is through punishing you?"

Go back to being a weatherman? he thought,
and shook his head once more.

"Child, I have never stopped being a
weatherman."

Suddenly, unprecedented in this protected
place--a down burst of hot, parched wind. The birds went silent.
Beneath his feet, the ground shivered.

"Go!" He threw down his hoe, grabbed the
child under her arms and yanked her to her feet. "Run! Into the
house!"

"Charzi!" she objected and he pushed her,
not gently, another blast of wind buffeting them, and a rumble
building.

She looked up into his face--and ran.

The news was everywhere, driving even his
delm's treasured melant'i plays off the house screens. Clan Korval
had struck against the homeworld, opening a hole in the center of
Solcintra itself. Ichliad stayed a short time among his horrified
kin, then escaped upstairs to his rooms, where his private screen
told the same tale over.

He listened with half an ear to the
explanations, the recorded warnings, the speculations as he paced
the length and breadth of his quarters, his fingers twisted
together as he debated with himself.

He was an authority--an expert. Unlike most
of the meteorologists who studied and graphed the subtle, agreeable
weather of the homeworld, he had seen, he had studied--he
understood--what would happen next. The winds would carry debris
and potentially deadly particles, raining them down on others, so
distant from the catastrophe that they would not think of their
danger.

And by whom? The Scouts? Well, yes. But the
Scouts were stretched thin, as he heard the tale told between the
sentences of the news reports. There were evacuations, teams sent
in to succor the wounded. It would be--days, perhaps, before the
Scouts had leisure to think. He--this was his field, and it fell to
him to give the warning.

He paused by the window and gazed down into
the inner garden that had been his care and duty for the past nine
Standards. The terms of his arrest were plain: he was to remain
housebound, communicating with no one, calling no attention to
himself, bringing no embarrassment to his house. Manage this for
ten Standards, his delm had told him, with an ironic bow that
indicated such restraint was doubtful, and his confinement would be
ended, his debt to the clan's consequence paid.

Six Standard months remained until his
parole. Freedom was within his reach.

"They must," he said to the empty room, his
voice striking the walls firmly, "be told."

His knowledge, his expertise--…

He had contacts, names. People who would
remember him, or at least remember his work. He had only to access
the communications module--unlocked, for where was the honor in
obedience, if the forbidden were not available as a constant
choice?

Ichliad turned from the window, walked over
to the desk, sat down. His fingers moved on the keypad, and there
was the screen, the program prompting him for an address.

But, really, he was a weatherman. There was
no choice.

It took some moments for the noise to become
sound, for the sound to become words, for the words to have
meaning, for the meaning to have urgency.

Brunner looked at the remains of his
solitary meal--"lunch" this would be by the cryptic schedule on the
canteen wall--and realized he was done anyway. Not that the food
was bad, but that his mind was far from it, his discovery of yet
another bombed-out weather unit filling his thoughts. Someone on
the surface was targeting the ground units--that much was certain.
Why they would do so, when accurate reporting of the weather was
crucial to both--or perhaps he should say, all--sides of the war
being waged on the planet below--that was the puzzle.

Well, that and how he would convince the
company this time to send him more units.

Sighing, he folded his assigned portable
regretfully and slipped it back into its pocket. Somewhere in the
latest information might be a key, a pointer, an explanation of the
newest weather pattern, the one he'd hoped to pinpoint using the
destroyed monitor.

At least today he'd been able to think and
study at lunch. Jack was someplace else.

Never good with small talk, even among
Liadens, Brunner found station-livers to be largely respectful of
someone who was working. Still, there was Jacumbra Edgil--"Jack,
just call me Jack and everybody'll know who you're talking
about!"--who seemed to wander the station talkative and unfettered
at all shifts, doing whatever it was that "Jack" did.

One was warned of Jack's approach by a
chorus of subtle clicks, chirps, beeps, and clanks, some of them
electronic, some born of the accidental interplay of the objects
hung along his several tool belts.

There were other warnings, as well, if one
were so engrossed in one's work that mere sound was disregarded.
For instance, Jack was very much not of Liaden size, standing a
full head taller than Brunner, carrying at least twice the weight;
sometimes he blocked the overhead lights.

Civil Twilight by Susan Dunlap
The Importance of Being Married by Gemma Townley
The Boozy Baker: 75 Recipes for Spirited Sweets by Lucy Baker
Sheikh And The Princess 1 by Kimaya Mathew
My Second Life by Faye Bird
Into the Blackness (Blackness Series Book 4) by Norma Jeanne Karlsson
Unforgivably Broken (The Broken Series Book Two) by Abel, Maegan
Pirate's Alley by Suzanne Johnson
Dogfight by Calvin Trillin
Rock Steady by Dawn Ryder