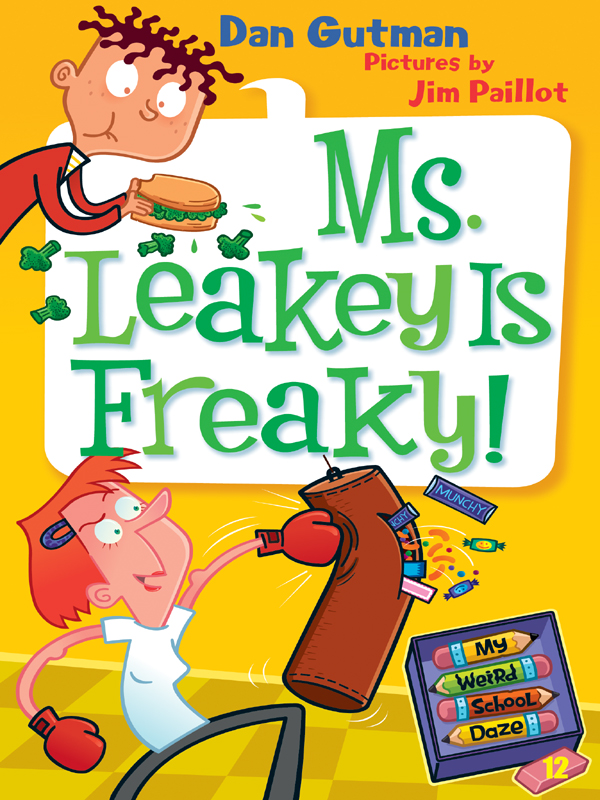 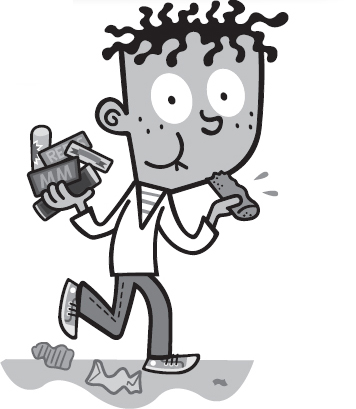 2.
Clash of the Titans

8.
Sweets for the Sweet

About the Author and the Illustrator 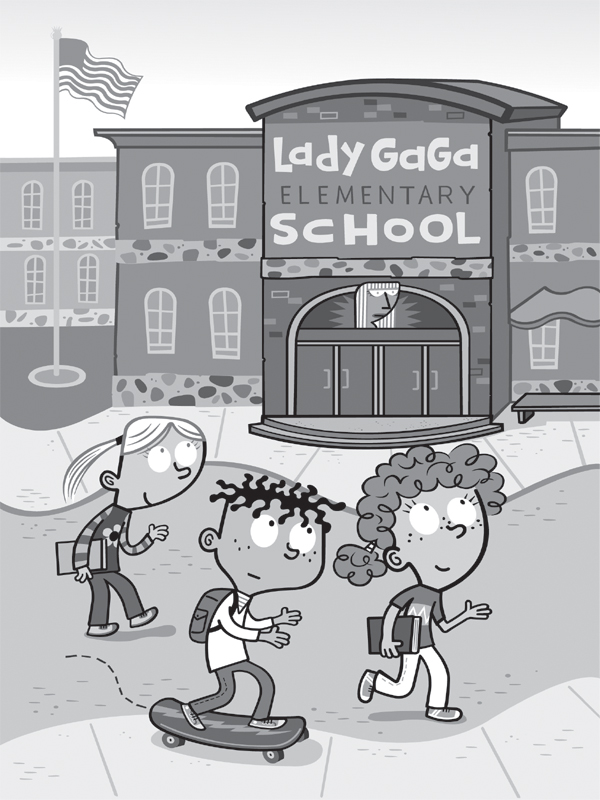 My name is A.J. and I hate school.

I go to Ella Mentry School. It was named after an old lady named Ella Mentry.

Every time I tell somebody I go to Ella Mentry School, they always ask, “Which one?”

“
Everybody
goes to elementary school,” they always say.

See what I mean? If you ask me, it would have been a lot smarter if they named my school after somebody famous, like George Washington or Lady Gaga.

My teacher is Mr. Granite, who is from another planet. It was Monday morning. Mr. Granite said we had to go to an assembly.
*
I sat with my friends Michael, Ryan, and Neil, who we call the nude kid even though he wears clothes. In front of
us sat crybaby Emily and Andrea Young, this annoying girl with curly brown hair that I hate.

After we pledged the allegiance, our principal, Mr. Klutz, climbed up on the stage. He has no hair at all. Mr. Klutz used to have hair, but it fell out. That's what happens when guys get old. I wonder if he still has his hair in a plastic bag at home so he can look at it and remember what it was like to be young.

Everybody was talking. So Mr. Klutz made a peace sign with his fingers, which means “Shut up!” We all stopped talking.

“Kids today eat too much junk food,” he told us. “Too much fat and too much sugar.
And you don't get enough exercise. That's why I hired Ms. Leakey, our new health teacher. She would like to say a few words.”

Ms. Leakey came bounding up on the stage like she was in a race or something. We gave her a round of applause by clapping our hands in big circles. She was holding a garbage can cover in one hand and a sword in the other hand. That was weird.

“Thank you,” Ms. Leakey said. “I'd like to introduce you to my best friends. I hope they'll become
your
best friends too.” Then our reading specialist, Mr. Macky, came out. He was dressed up like a giant peanut.

Behind Mr. Macky was our school
nurse, Mrs. Cooney. She had on a carrot costume. And all three of them were holding swords. It was a real Kodak moment.

Suddenly, they all started singingâ¦

“Veggies are so good for you

Nuts have lots of protein.

Fruits are fun to peel and chew

Drink your milk every day

Eat carrots for your eyes

And get lots of exercise!”

While they were singing, our Spanish teacher, Miss Holly, our speech teacher,
Miss Laney, and our security guard, Officer Spence, came out from behind the curtain on the other side of the stage. They were dressed up like a candy bar, a can of soda, and a donut. And they all had swords.

“Fruits and veggies are for
losers
!” said Officer Spence.

Ms. Leakey stopped singing and glared at the candy bar, can of soda, and donut.

At that moment, the weirdest thing in the history of the world happened. Ms. Leakey yelled, “Charge!”

And they all started fighting!

2
Clash of the Titans

“I'm full of protein!” shouted the peanut as he swung his sword around. “I have lots of energy!”

“Get lean and mean by eating greens!” shouted the carrot.

“I'm low in fat!” shouted the banana. “And a good source of fiber and vitamins!”

“I will make you fat and slow!” shouted
the candy bar as she charged with her sword.

“I will clog your arteries!” shouted the donut.

“I will ruin your appetite for dinner!” shouted the can of soda.

They were all running around the stage sword fighting with each other. It was like
Clash of the Titans
but with food. The banana hit the candy bar over the head, and it toppled over.

In front of me, Andrea was talking to her crybaby friend, Emily.

“This skit is very violent,” she said. “I'm not sure it's appropriate for children.”

“Can you possibly be more boring?” I told her.

Except for Andrea and Emily, all the kids were yelling and screaming with excitement. Up on the stage, the peanut knocked the sword out of the soda can's
hand. The soda can ran away. Everybody cheered. Ms. Leakey and the carrot were fighting with Officer Spence, I mean, the donut. It was awesome.

“I'm good for you!” shouted the carrot.

“But I taste better!” shouted the donut.

“Sugar and fat are my enemies!” shouted Ms. Leakey. “They must be your enemies too.”

Ms. Leakey kept stabbing her sword at the donut, but Officer Spence was jumping around, so the sword only hit the donut hole. He was fighting back hard, but it was two against one. Ms. Leakey got on one side of him, and the carrot got on his other side.

“This is for your own good, donut!” shouted Ms. Leakey. “Charge!”

And then, together, they stabbed the donut!

Officer Spence let out a scream, and then he fell to his donut knees and started crying. “This is
really
inappropriate for children,” said Andrea.

What is her problem? Andrea is no fun at all.

Ms. Leakey, Mrs. Roopy, Mr. Macky, and
Mrs. Cooney went to the front of the stage and took a bow. We all clapped in a big circle.

“Thank you,” Ms. Leakey said. “I hope you liked our performance. If you'll excuse me, I need to go do some push-ups.”

Then she ran away. We all clapped again.

Mr. Klutz climbed up on the stage and made the shut up peace sign to calm everybody down.

“Well, that was exciting!” he said. “So, did you kids learn anything from this skit?”

The Murder Exchange by Simon Kernick
Blood on the Tongue (Ben Cooper & Diane Fry) by Booth, Stephen
NAILED by Macko, Elaine
With Friends Like These: A Novel by Sally Koslow
Lord of Emperors by Guy Gavriel Kay
Royal Pain: An Alpha Bad Boy Billionaire Romance by White,Jane S.
Taking Liberty by Keith Houghton
Staying Power Book 14 in the Action! Series by GA Hauser
Kiss Me Gone by Christa Wick
Blood and Roses by Sylvia Day