Read Must the Maiden Die Online

Must the Maiden Die 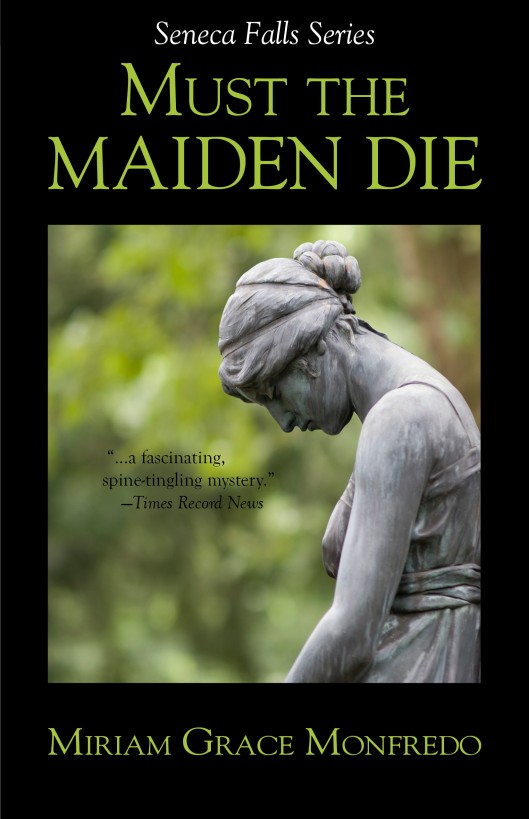 Praise for Miriam Grace
Monfredo and

"The genius of Monfredo is to teach
'herstory' while absorbing the reader in a good old-fashioned
mystery."—
Newsday

"A marvelous eye to historical
detail
...
a
beautiful read. If you have not yet read this author, then you are
missing out."
—The Merchant of
Menace

"Miriam Monfredo is one of the most
interesting and incisive writers in the field today."—Edward
Marston, author of the Nicholas Bracwell Elizabethan theater
mysteries and the Domesday Book series

Must the Maiden
Die

"The imaginative research and lucid
writing create a fine balance: Seneca Falls is our perfect mirror
for viewing the American women and men of the 1860s as they enter
the war that will change everything."—
Chicago Tribune

"Written beautifully, richly
satisfying both to the head and to the heart" —
Anne Perry

"Monfredo spins a clever,
suspenseful tale that involves gun-smuggling and sexual abuse.
She's at her best pulling plot twists out of actual events. Her
research is evident on every page." —
Publishers Weekly

"Like an alchemist of yester-year,
Monfredo musters the ingredients of character building, period
research, and place to transform those elements into a golden
resolution for the death of a Seneca Falls businessman ... Monfredo
explores the gamut of roles women in that time chose or had forced
upon them.
Bravissima.
I add that Monfredo does a wizard job capturing the spirit of
the Civil War's early days."
—The Poisoned
Pen

"An exciting story with a strong
mystery plot and several fascinating sub-plots. Monfredo's research
of the early Civil War years has captured the thoughts and spirit
of that era, and depicted the plight of women."
—
Romantic Times

"Echoes of Fort Sumter resound in
far-off Seneca Falls, New York, where librarian Glynis Tryon is
drafted into detective work
...
A case that will take Glynis once more deep into
the eternal questions of women's justice."
—Kirkus Reviews

MUST THE
MAIDEN DIE

This is a work of fiction. Names, characters,
places, and incidents are either the product of the author's
imagination or are used fictitiously, and any resemblance to actual
persons, living or dead, business establishments, events, or
locales is entirely coincidental.

MUST THE MAIDEN DIE

This book may not be reproduced in whole or
in part, by mimeograph or any other means, without permission.

This ebook is licensed for
your personal enjoyment only. This ebook may not be re-sold or
given away to other people. If you would like to share this book
with another person, please purchase an additional copy for each
recipient. If you’re reading this book and did not purchase it, or
it was not purchased for your use only, then please return to
Smashwords.com or your favorite retailer and purchase your own
copy. Thank you for respecting the hard work of this
author.

Scott and Nancy, Alyssa and Zackary,

and Christopher, who may one day write his
own

My grateful appreciation to:

Betsy Blaustein for her relentless
insistence on the Oneida Community

Lowell Garner, M.D., for his knowledge of
death and dying

Scott Monfredo for his prodigious knowledge
of the Bible, which saved for the maiden her good name

The major characters in
Must the Maiden
Die
are fictitious, but actual historic figures appear from
time to time. Interested readers will find these and other
relevant facts annotated in the Historical Notes at the back of
this and other novels in the Seneca Falls series.

In 1860, New York State enacted a
revolutionary piece of legislation, which followed the
groundbreaking 1848 Married Woman's Property Act. For more than a
decade, Elizabeth Cady Stanton and Susan B. Anthony spearheaded an
exhaustive effort leading to its passage. This legislation was
entitled
Chapter 90: An Act Concerning the Rights and
Liabilities of Husband and Wife
. It was adopted by the
Eighty-third Session of the New York State Legislature in March of
1860, and became commonly known as the Earnings Act, the first of
its kind in the United States. 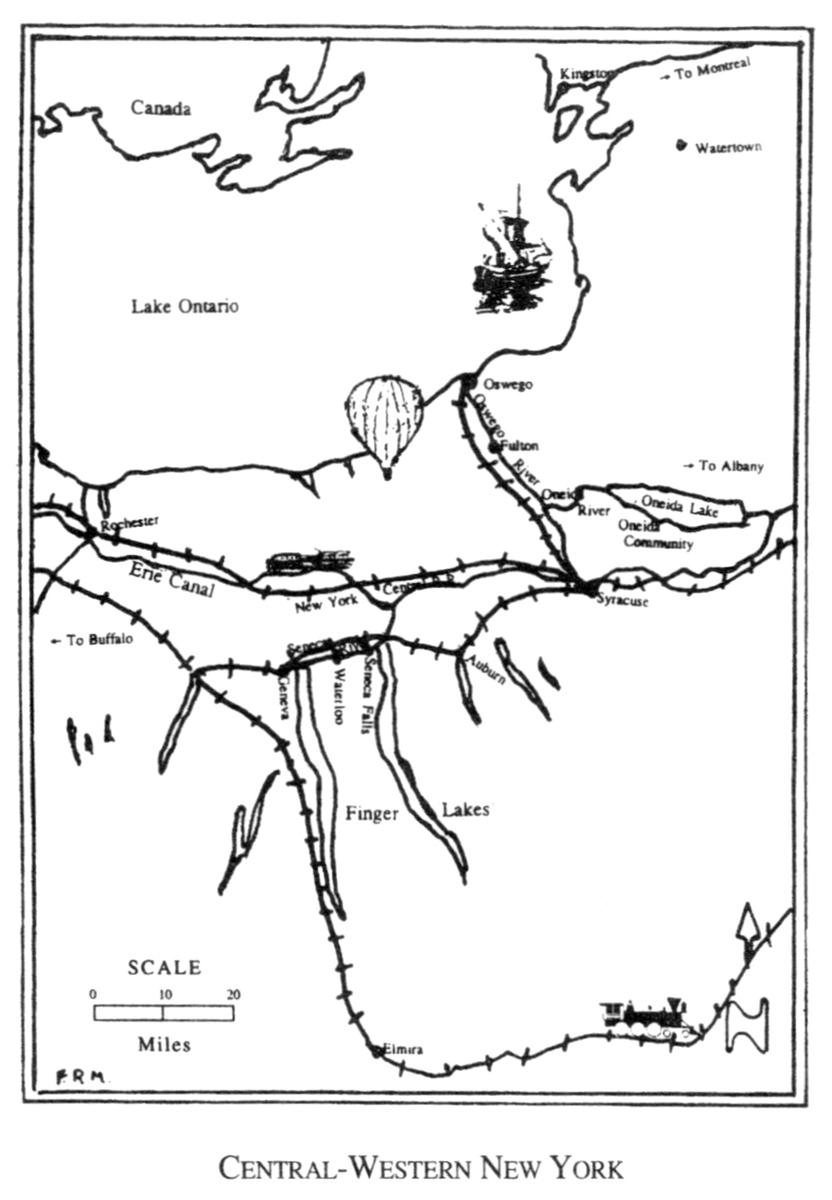 Thy dreams divided, thy prayers in
twain;

Flashing with laughter and wild with
glee,

Under the mistletoe kissing and dancing,

There shall come a matron walking
sedately

Tell me, O tell me, can I love her
greatly?

All for her sake must the maiden die!

The adversary has spread out his hand upon
all her pleasant things.

The girl has the quickened sense of all
those who are hunted by night. Even in sleep she can catch the
scent of danger; now it reaches her and brings her awake in an
instant. She jerks upright on the straw mattress to listen for
something she cannot yet hear. And she waits, knowing the stealth
of the hunter.

The room is dark, too dark for her to see. Outside
the room is a long, narrow corridor with a tall window and a table
that holds a kerosene lamp. The lamp is meant to burn with a
yolk-colored flame, but only for those who need its light, and she
knows it will not be burning now. The humpback moon rising will be
enough. She strains to hear through the darkness, listening in a
brooding silence that waits to be broken by the rasp of a latch
being lifted, the first furtive creak of the door. From the hall
window a white sliver of moonlight will appear, and as the door
begins to open, the sliver will spread like the pale flesh of a
peach made to yield before its time. Then, with a louder creak, the
door will swing all the way open, and the pungent odor of spirits
will come to her just as she has dreamed it.

Now she hears a clicking sound. It is like
the noise a rat makes running over a tin roof, but she knows it is
fingers fumbling with the latch. As the door slowly swings open,
she crawls off the mattress and onto the bare floor before the man
steps over the sill. When her rough cotton shift bunches above the
fork of her thighs, she doesn't try to cover herself. Modesty has
no meaning here.

Lying on her belly, she thrusts her forearm
between the mattress and the floorboards, her hand groping until it
touches the smooth bone handle of a carving knife. The one she has
stolen from the kitchen the day before. She pulls the knife out and
gets to her knees, inching backward until she huddles against the
wall beside a crudely built cabinet. The cabinet holds one drawer,
a wash basin, and a chamber pot. Aside from the mattress, it is the
only piece of furniture in the room, and it cannot conceal her.

His breathing sounds labored, as if he is
hurried, and when he comes into the room his spurred boot heels
grate on the clean bare wood. The grating stops suddenly, and she
hears his breath come faster. She knows why he has stopped. She
presses her back against the wall, not needing to see to know what
he is doing, and she hears the clink of his gold belt buckle as it
hits the floor.

It will take him a moment to find her. Even
though the room is small, each night she pushes the mattress to a
different corner. Sometimes, when the smell is strong, he will
stumble over the mattress, and then she can edge past him and
escape through the door. He doesn't always come after her. Not if
he knows there is someone in the house who is awake and might
hear.

But this time she might not get away,
because his step is steady as he comes toward the cabinet. The girl
grips the handle of the knife with both hands. She doesn't know if
she will use it for him, or for herself, but she remembers the last
time, and she will use the knife one way or another.

She hears him take another step toward her.
Her palms are slick with sweat, and when she tries to tighten her
grip on the bone handle, the knife slips from her grasp to drop
with a clatter. With her hands outstretched she gropes in blind
desperation, searching the floor, but the knife has slid beyond
her reach.

Then, coming from the darkness beyond him,
she hears a faint keening sound and the man's breath catches when,
like a faraway echo, the sound repeats. It is a woman's voice,
calling from an upstairs bedroom. The girl's room is beneath it,
across the hall from the kitchen in the rear of the house. Now she
hears the slither of fabric, the snick of a belt being buckled,
then the thud of his boot when he kicks the door. He mutters an
oath as he steps back into the corridor, and the biting smell
trails after him like an engorged tail.

The Morning Show Murders (1) by Al Roker
Swing Low by Miriam Toews
The Log From the Sea of Cortez (Penguin Classics) by John Steinbeck
Viper Moon by Lee Roland
Shadowgod by Michael Cobley
Fire and Forget by Matt Gallagher
The Weird Travels of Aimee Schmidt: The Curse of the Gifted by J.A. Schreckenbach
The Color of a Promise (The Color of Heaven Series Book 11) by Julianne MacLean
All I Ever Wanted by Kristan Higgans
Dog with a Bone by Hailey Edwards