Neil Armstrong: A Life of Flight 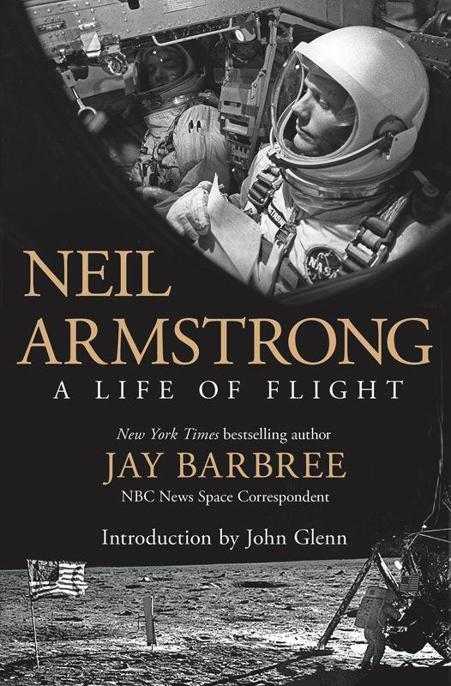 2. Test Flight, High Desert, and a Satellite or Three

3. Those Who Would Ride Rockets

4. The Moon Is Calling

8. The Gemini Twins Are Flying

24. Space Shuttle and Beyond

Neil Armstrong was an aviator. He flew everything heavier-than-air—even gliders. He never boasted, never lobbied to be the first to walk on the moon, yet it would be difficult to find another who achieved as much in a lifetime.

Once when we were talking about his first step on the lunar surface, I told Neil that I was not normally a jealous person, but for him I would make an exception.

He was never comfortable with fame, hated talking about himself, so how do you write a book about Neil Armstrong’s life of flight?

It helps if you are Jay Barbree, a friend and a pilot.

Barbree covered every one of our spaceflights for the NBC networks, all 166, and Neil wrote, “Jay Barbree is one of the world’s most experienced space journalists devoted to getting it right, and he does.”

This is the story of Neil Armstrong from the time he flew combat missions in the Korean War, flew a rocket plane called the X-15 to the edge of space, saved his
Gemini 8
by flying the first emergency return from Earth orbit, and then flew
Apollo 11
to the moon’s Sea of Tranquility. There he made the first footprints on someplace other than Earth.

If you turn the page, I think you will be pleased.

There was a time when Neil Armstrong was the most well-known person in the world. But despite the notoriety, he never used his fame for personal gain. As Brian Williams reported, Neil could have easily owned a chain of moon burger joints. He could have challenged the wealth of a Donald Trump. Instead he remained a private person until he died.

For someone who never considered himself special, everyone else did. The world praised him in all languages, every radio and television spoke his name, and newspapers and magazines everywhere heralded stories about his accomplishments.

In a quiet, critical way the fame annoyed Neil. He considered most of the stories were from the outside looking in. He very much wanted stories written from the inside, giving credit due others. He wanted not a book about himself, but a book about all flyers and astronauts—an interesting, moving, entertaining factual book about those who flew from decks pitching at sea, from runways hacked through jungles, from desert strips, and from snow-laden mountain slopes; those who rode rockets from launchpads to live on orbiting outposts; those who rode spacecraft to the moon and always found their way back. These were the people who punched holes in the sky, raced moonward, and Neil was convinced any one of them could have flown the same flights he did.

He regarded Tom Wolfe’s
The Right Stuff
a great yarn and good filmmaking, but terrible history: the wrong people working on the wrong projects at the wrong times, a project that bore no resemblance whatever to what was actually going on. Neil said, “What else could you expect written by one who never got closer to spaceflight than a Manhattan penthouse?”

For a half-century, Neil Armstrong lived flight and space travel, and he and I talked about writing a book from the inside. But every time we got close Neil found he was not comfortable writing about himself. He could in no way brag his accomplishments were greater than others and finally, he told me, “Jay you write it. You’re a pilot. You’re one of us.”

There are only a couple of things I truly know. First, as a pilot I couldn’t carry Neil Armstrong’s lunch box. Second, I was never going to find a way to drag Neil to a keyboard to write about Neil because he simply marched to his own drummer. He wasn’t much for rubbing elbows. He was quiet without being shy with a well thought out fairness in his sense of humor and his brand of justice. By some people’s measurements he was a recluse.

Over the years Neil and I did write together. Not about his notable deeds, but rather about most anything that did not praise Neil Armstrong.

He wrote the introduction to
Moon Shot
—the
New York Times
bestseller by Alan Shepard, Deke Slayton, and myself—and when he accepted invites before Congress to talk about the state of our space program he often asked for my input.

When Neil; Jim Lovell of
Apollo 13
fame; and Gene Cernan, last to walk on the moon, wrote an op-ed on what they felt should be the future of America’s space program we reported their op-ed on Brian Williams’s
NBC Nightly News
.

One of Neil’s last projects was writing with me a five-story series called
Space in the 20Teens
. Five weeks after we finished the project, Neil Armstrong died at the age of 82.

In 2008, NBC News gave me a dinner for 50 years of service and Neil surprised everyone. The quiet man came.

Neil was the keynoter, and following the dinner we pulled up seats at the bar of one of our favorite watering holes from the past, and Neil confessed all the things NASA did to mislead the media during history’s first walk on the moon. He and I closed the bar. I wrote the story and was instantly pleased it was read by more than two million.

Neil Armstrong’s propensity for getting things right makes it essential we do our best to accurately chronicle this American icon’s exciting life of flight.

I first met Neil in 1962, and I’ve researched every detail of his record-breaking years. I asked, and Neil and those who flew with him answered. 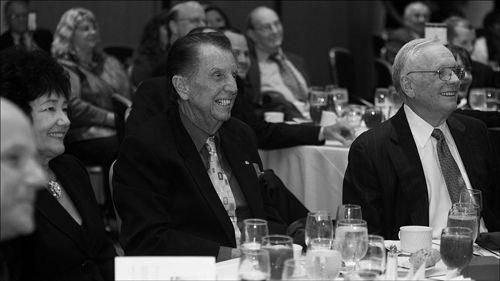 Left to right: Jo Barbree, Jay Barbree, and Neil Armstrong enjoy dinner with America’s first in orbit, John Glenn, who is performing standup comedy out of the picture. (Courtesy of the author)

Neil’s words in this book are direct quotes by me and others I know to be trustworthy. They are from years of personal e-mails, recorded interviews, 51 years of this reporter’s notes and files—a voice history as Neil told two NASA historians and transcripts of every word he spoke in space and on the moon.

The primary engine driving this book is accuracy: that’s how Neil lived his life. But I will not report to you a single word he told me in confidence. At times I will put myself in Neil’s shoes to re-create his thoughts just as he conveyed them to me, and just as important, I shall write more in this book about Neil Armstrong than he would have liked. 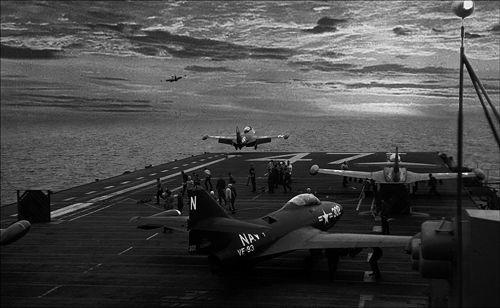 A WING AND A PRAYER

At daybreak, pilots came onto the deck of the aircraft carrier
Essex
. Bundled like schoolchildren on a snow day, they waddled to their jet fighters. One of the first to climb aboard was a young ensign named Neil Armstrong.

His plane’s captain helped Neil into the cockpit—helped him connect his shoulder and lap straps, double-checked his parachute harness, and rechecked his oxygen mask. Last, he made sure Neil’s life raft and radio were ready to go.

Armstrong had turned 21 only four weeks earlier, but despite his age he was suited and ready to fly his seventh combat mission.

“Move jet into position for launching!”

The deck crew inched his Panther onto its catapult, and Neil reminded himself that his first few “hot catapult” launches had taken faith. There was a degree of uncertainty. If for one reason or another the catapult produced a weak shot, he and his Panther could end up in the water. He instinctively rechecked his harnesses and lap belt before resting a gloved hand on the jet’s control stick. His other hand rested on the throttle. He was ready to increase his Panther’s power plant to maximum thrust.

The white heat scorched everything nearby and the launch officer’s right hand shot downward. The catapult fired.

Neil felt his weight double. His facial skin stretched from the powerful acceleration. His lips lengthened. His eyes and body slammed against his seat. Eight tons of jet and pilot were swept down the catapult track, and within one blink of his eyes—less than the length of a football field—Neil’s Panther climbed from its carrier’s deck. Acceleration held him prisoner as one jet fighter and its pilot reached for sky.

Minutes would pass before Neil Armstrong would fly high enough and fast enough to become part of the soul-lifting beauty of quiet flight. It was the perfect escape—streaking ahead so fast that the overwhelming whine of his jet never caught up. It was necessary to capture the moment—to enjoy the single last morsel of time wherein a fighter pilot could relax before sending his 500 pounders under his wings and his 20mm shells from his guns speeding toward their targets.