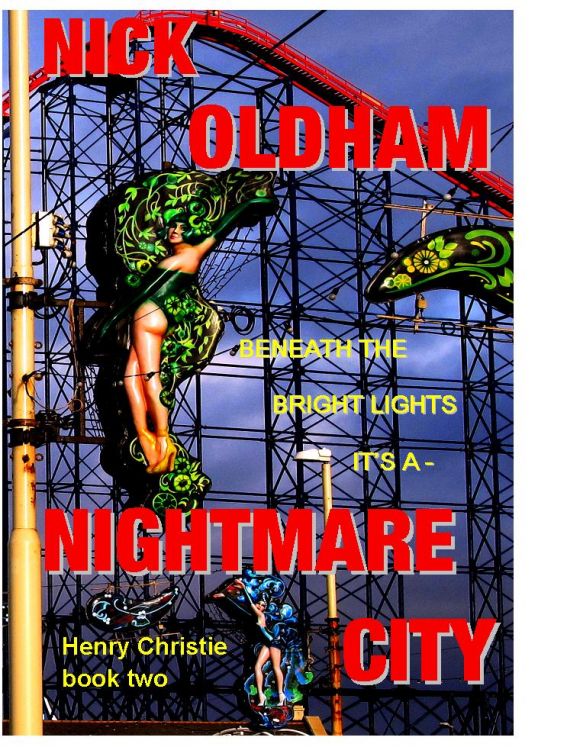 Published by Nick Oldham at Smashwords

This ebook is licensed for your personal enjoyment only. This
ebook may not be re-sold or given away to other people. If you
would like to share this book with another person, please purchase
an additional copy for each recipient. If you’re reading this book
and did not purchase it, or it was purchased for your use only,
then please return to Smashwords.com and purchase your own copy.
Thank you for respecting the hard work of this author.

This book is a work of fiction and any resemblance to persons,
living or dead, or places, events or locales is purely
coincidental. The characters are productions of the author’s
imagination and used fictitiously

Nick Oldham is the author of the ‘Henry Christie’ series of
crime novels set in the northwest of England. He was born in April
1956 in a house in the tiny village of Belthorn – mums were very
hardy in those days – up on the moors high above Blackburn,
Lancashire. After leaving college then spending a depressing year
in a bank, he joined Lancashire Constabulary at the age of nineteen
in 1975 and served in many operational postings around the county.
Most of his service was spent in uniform, but the final ten years
were spent as a trainer and a manager in police training. He
retired in 2005 at the rank of inspector.

He lives with his partner, Belinda, on the outskirts of
Preston.

For more information about Nick and his books visit
www.nickoldham.net
or
‘Nick Oldham Books’ on Facebook
http://www.facebook.com/pages/Nick-Oldham-Books/134265683315905

It’s the world’s brashest, trashiest seaside resort, alive
with daytime fun and night-time thrills ... Blackpool, city of
dreams. And for some, like Detective Inspector Henry Christie, a
city of nightmares.

Match day is never enjoyable for the police, their hands are
full of petty crime and the cells full of yobs. So it’s a good time
for serious villains to pull a stroke. But a shooting at a
newsagents and killing a police officer demands priority action.
Even though the local police are first on the scene, the elite
North West Organised Crime Squad are called in. Henry would be
jealous of missing out on such a juicy case if he weren’t so bust
trying to stem the tide elsewhere.

There’s a multitude of problems to deal with - like the murder
of a prostitute, found washed up on the beach. The wounding of a
policewoman trying to question a motorist. A crazy car chase which
causes mayhem all the way to Manchester. And the case which raises
most public concern – the accidental shooting of Boris the gorilla
in Blackpool Zoo.

What Henry doesn’t yet realise is that these incidents are
linked together by a conspiracy that is about to spread
indiscriminate pain. Gang warfare and official corruption are a
threat to every citizen’s life ... especially those of cops who
value their honesty – like Henry Christie.

‘Every detail in this gripping, fast-paced story of police
corruption and gang warfare has the ring of truth’ –
Bradford Telegraph & Argus

‘Oldham writes multilevel crime stories in multiple voices,
which adds to the suspense and gives an immediacy to the gritty
violence’ –
Library Journal

‘Skilful writing, a tautly woven plot, plenty of unexpected
twists, and a main character who’s both intelligent and appealing
add up to a fine read’ -
Booklist

A
lso by Nick Oldham in the ‘Henry
Christie’ series:

A Time for Justice (available as an e-book on
Smashwords)

One Dead Witness (available as an e-book on
Smashwords)

The Last Big Job (available as an e-book on
Smashwords)

It had been a hectic afternoon and looked set to become a
bloody night.

The custody office at Blackpool Central police station, always
busy even at the quietest of times, was full to bursting. Since
noon, over sixty prisoners had lurched through the door. Usually
fighting, either between themselves or with their arresting
officers, the majority were drunk and often covered in blood,
vomit, snot or beer or a combination of all four. They were all
males with an age range between sixteen and twenty-four. And all of
them were connected with the football match which had taken place
that afternoon between Blackpool and Bolton Wanderers at the
Bloomfield Road ground.

What had started as a trickle of prisoners before the match
became a raging torrent when the visiting side went ahead and won
convincingly. Miffed, the home supporters reacted in the only
positive way they knew. With violence.

When the final whistle blew, the crowd surged out of the
ground and a series of running battles between opposing fans broke
out, culminating in a massive head to head confrontation on a large
car park adjacent to the football ground. This was only broken up
when officers in riot gear waded in and got the message across: the
police were not taking any shit today.

Despite numerous arrests from that one incident, the fighting
continued unabated. This was because Blackpool, unlike most other
towns, has countless attractions which make visitors reluctant to
leave until at least a few have been sampled. Thus the Bolton
supporters would not be departing until the early hours of Sunday
when the night clubs kicked out; it also meant that Blackpool fans
would harry them until they went.

All in all, a recipe for trouble.

The fighting gravitated away from the Ground into the town
centre pubs and cafes. The police, even though reinforced from
across the country, were stretched to their limits.

In the custody office, Acting Detective Inspector Henry
Christie was up to his eyeballs in prisoners. He and a team of
three Detective Constables had been assigned to help process and
interview any prisoners suspected of committing more serious
offences.

The majority of youths had been arrested for run-of-the-mill
matters such as minor assaults, public order offences and
drunkenness. Henry and his team could therefore have spent a
relatively stress-free afternoon had he so wished; however he was
uncomfortable when it became apparent that the large number of
prisoners were keeping uniformed officers off the streets where
their presence was desperately needed.

Eventually, after listening to the personal radio going
berserk without respite, Henry made an unpopular decision. He
volunteered his detectives to assist with any prisoner, no matter
how trivial the reason for arrest. This would speed up the process
and release uniforms back outside as quickly as
possible.

His DCs were disgruntled by the gesture.

‘
Not our fuckin’ job,’ one of them moaned bitterly, ‘bein’ a
fuckin’ gaoler.’

‘
Just do it,’ Henry said shortly, ‘and I’m sure it’ll reflect
in your next appraisal.’

Henry took his jacket off, rolled up his sleeves and knuckled
down to the task. When his reluctant team saw this, they also got
down to it without further dissent.

Two hours later, without having had the opportunity to finish
a cup of tea, he’d taken so many sets of fingerprints and
mug-shots, charged so many prisoners and flung so many bodies into
cells, that he’d lost count.

He’d had his fill of skin-headed, foul-mouthed, smelly,
lager-bloated youths who wanted to hit him or spit at him. In fact,
he was surprised he hadn’t decked several of them already. He was
proud of his remarkable, but waning, self-control.

He began to hope that the few football supporters who were
still at large would do something horrendously bad - like machete
each other to pieces - so that he and his team could be
liberated.

Anything to get out of this hell hole.

Prior to hitting the shop they cruised the dark January
streets in a stolen Alfa Romeo 164 3.0 Super, scouring the area for
any signs of blue uniforms. They also had a scanner tuned into the
local police frequency.

Nothing seemed untoward. The meagre resources of law and order
were concentrated on rampaging football supporters, making the
chance of a stray PC drifting by virtually nil; it would also mean
that the response time to incidents would be vastly increased when
the alarm went up. Which it would. Very shortly.

They were feeling good, hyped-up and buzzing. Adrenalin and
speed coursed through their veins and sinuses like white water,
pushing them up to a high plateau from which they felt they could
take on the world.

As in the past - and their Modus Operandi detailed this - all
four of them were expensively and identically dressed in Dolce
& Gabbana casuals: white tennis tops with black collars and
cuffs, the letters
DG
clearly visible on their left breasts, grey slacks and
two-tone (black and white) shoes. On their wrists they wore
identical Dunhill watches.

The weapons they carried, and had shown they were prepared to
fire, were a frightening combination which seemed to have been
purposely chosen to complement their designer clothes. Each carried
a semi automatic 9mm ‘Baby Eagle’ pistol in a shoulder holster; the
three who would actually do the business had an Italian SPAS 12
sawn-off shotgun and two mini-Uzis between them.