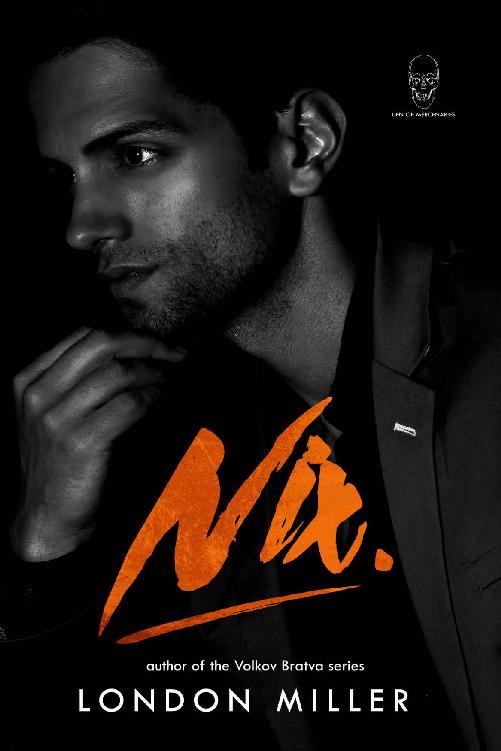 C
over design
by London Miller

Valon: What Once Was

Where the Sun Hides

Where the Snow Falls

Where the Wind Whispers

Freedom is a burden, but you learn to bear it.

O
n a late Sunday night
, while most of the city was sleeping, Luna Santiago hadn’t expected to be riding the elevator up to the nineteenth floor of a building in midtown where Dr. Donna Marie’s office was located. And despite the woman’s unassuming photograph next to her biography on her website—Luna didn’t think she was any ordinary therapist.

Not when it had taken a security guard that was far more skilled than he pretended to be to key her up—though not before taking a copy of her ID and calling her name up. Only once he had gotten the all clear from someone upstairs did he walk her to the bank of elevators on the other side of the building and let her through.

The doors pinged once she reached her floor, opening to a lobby, the receptionist’s desk the first thing Luna could see.
Dr. Donna Marie, MD
was inscribed in bold chrome letters along the front of the dark wood.

A woman seated behind the desk, red hair twisted into an elegant knot at the nape of her neck, pearl earrings dangling from her ears, and a black dress that conformed to her shape, looked to Luna with a blink, smile already forming. Maggie, her name was, from the nameplate at the corner of her desk.

“Good evening, Mrs. Runehart,” she greeted as she moved to her feet—she couldn’t have known how much Luna had grown to despite that name. “If you would please have a seat, Dr. Marie will be with you shortly.”

There was a waiting area, directly opposite of where she was standing, but one glance in its direction told her it was the last place she wanted to be.

Especially since her husband—
estranged
, she should say—was already seated, a newspaper in hand as he read the classifieds. Since she could remember, he made it a point to do this on the second of every month.

The listings, he had told her once, and old habits.

At least it wasn’t the obituaries again.

He was early—earlier than even her as their appointment wasn’t for another half hour at least—but that wasn’t much of a surprise.

Kit Runehart was punctual to a fault.

And whether she liked it or not, unless she wanted to stand in the middle of the floor, she had no choice but to go over to him.

Crossing the floor, she sank into a chair opposite him, picking up one of the magazines that she wasn’t really going to read, just to give herself something to do.

His gaze had yet to lift from what he was reading, but she had noticed the slight stiffening of his body as she’d walked past.

She knew what he was thinking—undoubtedly wondering why she hadn’t taken the seat at his side. It used to be second nature to her when she was with him.

Next to him was where she loved to be.

But she couldn’t give in to him, not yet, and she knew that if she fell into temptation now, she would be back at square one.

It was a desire she had to fight with every last bit of her being. Worse, she was further annoyed with herself because she actually
wanted
to be sitting next to him. Feel the brush of his leg when he moved, or the way his fingers would curl around her thigh whenever she was next to him.

Patience, one of his infamous lessons, had never been her strong suit.

The tangible silence stretched on between them until Maggie announced that it was time, then ushered them into a back office, offering to fetch them tea as they waited.

Luna tried busying herself by looking around the spacious room, from the books lining the built-in shelves along the walls, to the awards and accolades hung up.

She had been determined
not
to be the first to break, but after seeing what a few of those awards were for, she forgot all about that.

“Marriage counseling?” she asked, her surprise bleeding through her voice. “Are you serious?”

Finally,
finally
, he looked at her, and when he did, she was reminded why she had avoided him at all costs.

Long before now, he had crawled beneath her skin and embedded himself there. Most days she felt comfort in that knowledge—other days she just wanted to take a knife and dig him out.

His eyes softened the way they only did when he looked at her—as though she was the only thing that mattered to him.

It was
that
look that had made her fall in love with him in the first place.

“My attempt at appeasing you,” he answered, draping his arm across the back of the love seat he sat on.

To anyone else, that might have sounded reasonable—and maybe if they were two other people, she might have gladly accepted this—but they had the type of problems that a counselor couldn’t fix.

Luna shook her head, disbelieving. “And you think
this
is the right answer?”

Kit nodded with the barest shrug of his shoulder. “It’s a start, no?”

Before she could respond, Dr. Marie appeared, Maggie at her heels carrying a heavy silver tray. “Good evening to you both.”

Kit was the first to ease to his feet, all predatory grace and ease, first assisting Maggie with the tray, then greeting Dona with a charming smile.

Luna could almost hear his voice in her head, repeating words he lived and breathed.

Manners—like saying please and thank you.

Remembering just how he liked for her to use those words made her skin flush, but she quickly shoved those memories away.

Donna Marie was older, in her late fifties if Luna had to guess, with white-blonde hair and pale, porcelain colored skin. She wore a sharp two-piece suit, and a pair of cat-eye frame glasses adorned with small pearls at the corners.

She spoke his name with a familiarity that had Luna glancing in his direction. How could she have known the man for seven years, married to him for more than half that time, and not know this about him?

But, Kit had always been rather good at keeping his secrets—his secrets were the reason they were there in the first place.

This was enough inspire a reaction from Kit. “You haven’t been a Santiago for years, Luna.”

His expression was cold, though it melted as he shook his head. “Don’t count on that.”

Donna, who had probably seen far worse in her office, didn’t seem fazed by their exchange. “If it’s all the same to you, I’ll just call you Luna. You’re welcome to call me Donna, Kit already does.”

“I didn’t know you were seeing a shrink,” Luna said, her statement pointed.

From the look on his face, she didn’t think he wanted her to know now. “It wasn’t relevant—and
isn’t
relevant to why we’re here now.”

“Isn’t it? You hiding something like this from me is part of the problem.” His secrets were the biggest hurdle they couldn’t jump. “But I shouldn’t be surprised—I’m the only woman in your life you don’t confide in. Where is Aidra, anyway? She’s usually close by.”

Aidra—the woman who took her role as Kit’s ‘assistant’ seriously. She’d been there the day Luna had been deposited on Kit’s doorstep, and there the day she left him. Some days it felt like she was just as much a part of their relationship as they were.

“I thought it best this stay between us, and I do confide in you, more than I have any other person in my life.”

She wasn’t so sure about that. “It wouldn’t be the first time she’s heard us argue,” Luna noted.

Nor the second, or even the fifteenth.

“Can you not accept anything I say without being combative?” he asked, adopting that tone she had always hated.

Glaring at him, she folded her arms across her chest. “I’m
not
.”

“How about,” Donna interjected, “we start at what brought the two of you here today. Kit, since you were the one to arrange this, would you like to start?”

“Luna believes I have betrayed her in some way.”

“Right, because taking on a contract with the woman that attempted to have me
murdered
is just a ‘misunderstanding?’” Luna mumbled, trying to decide whether or not she was ready to leave.

She didn’t think there was any other way to explain why what he had done was wrong, and if he couldn’t see it when she explained it to him, then he wasn’t going to understand at all.

“What I said was not meant to negate your feelings—I merely attempted to answer the question before you interrupted.”

“Then by all means,” Luna said with a wave of her hand. “Continue.”

“What she fails to realize is that there is, and has always been, a reason for the things that I do. When she left me, I wasn’t prepared to explain it then.”

Luna couldn’t help herself. “And you think that whatever you say will justify what you’ve done?”

Donna made a note in the leather notebook she held. “Before we speak on that, Luna, would you mind sharing why you’re here?”

Because she desperately hoped that this crazy relationship between them could be fixed. “He asked. When he gives a command, I follow it.” She glanced in Kit’s direction with a sardonic smile. “It’s who you trained me to be.”

“Have you no interest in trying to understand your marital problems?” Donna asked with another scribble. “I can only help if you let me.”

“Oh, I understand what the problem is—he’s a liar.”

Kit sighed. “Once was unintentional.”

“But it became intentional the second you learned the truth and didn’t share it with me.”

“I was protecting you, Luna.”

“Lying to me is never protecting
me
—you were protecting yourself.”

Kit ran a hand through his hair, his frustration showing, but she refused to feel bad about that. “It’s not that simple.”

Their relationship could never be seen as
simple
, not with the way it started, or even the way it ended.

Even she didn’t understand it sometimes.

“How about we start at the beginning?” Donna said, setting her pen down. “Sometimes, it only take a little clarity to better understand someone else’s perspective. So, if you both are willing, then we can start there.”

Years
worth of a story.

Donna nodded once. “Take as much time as you need.”

Luna looked to her husband, the man she had vowed to love, honor, and obey. She tried to think of the right words, where to start when it came to their relationship. There was so much.

Kit sat back, resting his arm along the top of the settee. “It all started when my brother called to tell me he’d bought a whore.”

The Viking's Pursuit by Winter, Nikki
Leppard, Lois Gladys - [Mandie 03] by Mandie, the Ghost Bandits (v1.0) [html]
Cold in Hand by John Harvey
The Single Dad Finds a Wife by Felicia Mason
A History of New York by Washington Irving
Waiting for a Girl Like You by Christa Maurice
His Bewildering Bride (The Brides of Paradise Ranch - Spicy Version Book 3) by Merry Farmer
Karen Michelle Nutt by A Twist of Fate
Down from the Mountain by Elizabeth Fixmer
The Tying of Threads by Joy Dettman