Read No Messin' with My Lesson Online

No Messin' with My Lesson 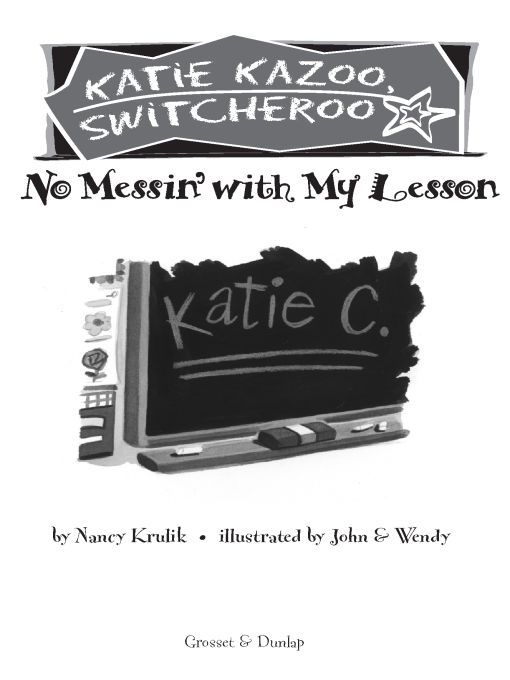 Table of Contents
Dedication
Copyright Page
Title Page
Chapter 1
Chapter 2
Chapter 3
Chapter 4
Chapter 5
Chapter 6
Chapter 7
Chapter 8
Chapter 9
Chapter 10
For my parents, Gladys and Steve—N.K.
For Julia Andrews—J&W
The scanning, uploading, and distribution of this book via the Internet or via any other means without the permission of the publisher is illegal and punishable by law. Please purchase only electronic editions and do not participate in or encourage electronic piracy of copyrighted materials. Your support of the author’s rights is appreciated.
Text copyright © 2004 by Nancy Krulik. Illustrations copyright © 2004 by
John and Wendy. All rights reserved. Published by Grosset & Dunlap, a division of Penguin Young Readers Group, 345 Hudson Street, New York, New York 10014. S.A.
Library of Congress Cataloging-in-Publication Data is available.
eISBN : 978-1-101-09866-0
ABCDEFGHIJ 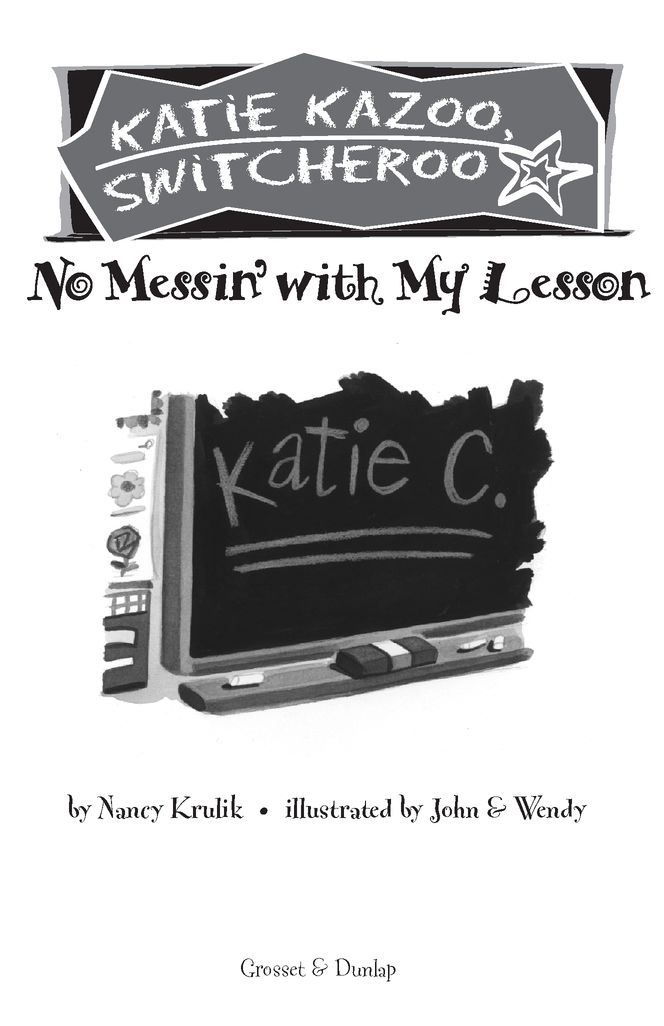 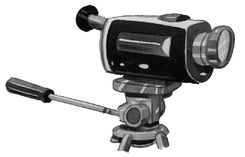 Chapter 1
“Cinderella, dressed in yellow. Went upstairs to kiss a fella. Made a mistake, and kissed a snake. How many doctors did it take? One, two, three . . .”
Katie Carew began to count as she turned her end of the double Dutch jump ropes. Her best friend, Suzanne Lock, was jumping between the ropes. Becky Stern was turning the other end.
Katie’s other best friend, Jeremy Fox, was on the soccer field. He was kicking a ball around with Kevin Camilleri and Mandy Banks. George Brennan and Manny Gonzalez were on the swings, laughing at something. Probably at one of George’s jokes.
Everyone was having a great time.
The strange thing was, the only kids on the playground were the kids in class 3A. Everyone else had already gone in to start the school day. But no one had told the kids in Katie’s class to stop playing and come inside. 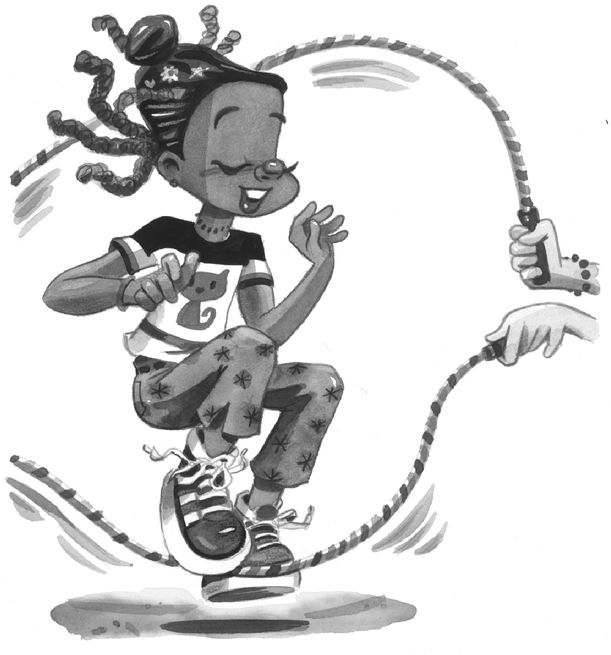 “I wonder where Mrs. Derkman is?” Becky asked.
Usually, their teacher was on the playground before school began. When it was time for classes to start, she would blow her whistle, and the kids would line up to go into the building. But, this morning, Mrs. Derkman was nowhere to be found.
“Do you think we should go inside on our own?” Katie wondered. “School started five minutes ago.”
“No way,” Suzanne said between jumps. “I’m not going in there until someone tells me I have to.”
Just then, Mr. Kane, the school principal, strolled onto the playground. “Class 3A,” he called out. “You need to be in school now. Line up.”
Katie immediately dropped her end of the double-Dutch ropes, and ran for the door. Suzanne tripped over the fallen ropes.
Plop.
She landed right on her rear end.
“Nice one, Suzanne,” George Brennan teased. “How about giving us an instant replay?” He raced past her.
Suzanne glared at George.
As the kids lined up, Jeremy turned to Katie. “Do you think Mrs. Derkman is absent today?” he asked her.
Katie shook her head. “No way. Mrs. Derkman is
never
absent.”
“I know,” George agreed. “She’s
always
at school. She’s here when we get here in the morning, and she’s here when we leave in the afternoon. I’d swear she lived in the school—if I didn’t know she’d moved in next door to you, Katie Kazoo.”
The other kids all looked sympathetically at Katie. Imagine having your teacher live right next door. Especially a strict teacher like Mrs. Derkman. Talk about bad luck!
“Maybe she’s preparing a surprise for us in the classroom,” Miriam Chan suggested.
“Oh, that would be awful,” George moaned.
“How do you know?” Miriam asked him. “It could be something great.”
“Any surprise Mrs.
Jerk
man could dream up would have to be bad,” George told her. George did not like Mrs. Derkman very much.
“You children keep quiet as you walk down the hall,” Mr. Kane warned as he led them inside. “The other classes are already busy learning.”

Sure enough, Mrs. Derkman was there when the kids walked into the room. She was standing in the back of the room, looking through the lens of a video camera. The camera was planted firmly on top of a stand.
“What’s that for?” Manny asked Mrs. Derkman.
“I’m going to tape our day,” Mrs. Derkman explained.
“Why?” Manny asked.
Mrs. Derkman checked the lens one more time, and then walked to the front of the room. “After school, I’m going to watch the tapes to see how I teach. That way, I can study what I’m doing right, and what I’m doing wrong. I can come up with ways to be a better teacher.” 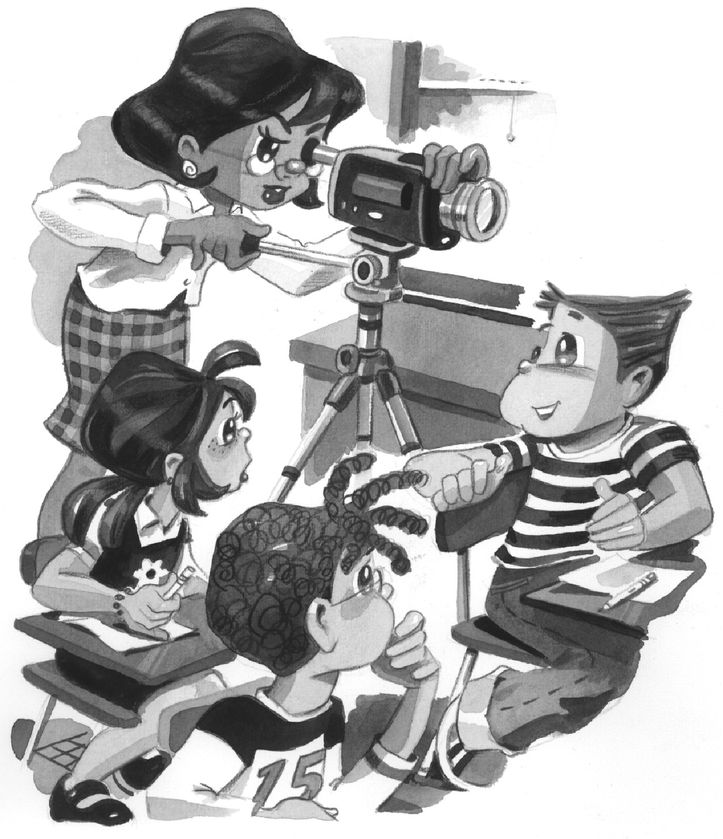 Katie looked at George. She could tell by the expression on his face that he was practically bursting with ideas for how Mrs. Derkman could be a better teacher. He opened his mouth to say something, but Mrs. Derkman shot him a look. George kept quiet.
“So you’re going to watch the tapes the way a coach does after a football game, to see where the team went wrong,” Jeremy said.
“Exactly,” Mrs. Derkman told him. “You see, I’ve been entered in the Cherrydale Teacher of the Year Contest. One of the judges is going to come here and watch me teach. I want to make sure that I do my best.”
“When is the judge coming?” Kevin asked.
Mrs. Derkman shrugged. “It’s a surprise. I don’t know when he will come or what he will grade me on.”
The kids all stared at their teacher with amazement. Someone was going to give Mrs. Derkman a grade? Now that was a switch!
Mrs. Derkman walked over to the board and picked up a piece of chalk. “Now, just forget about the camera. Pretend it’s not there. We have work to do.”

Chapter 2
Mrs. Derkman may not have wanted anyone to think about the camera, but the kids couldn’t help it. In fact, it was
all
they could think about.
“Who can tell me one problem the pioneers faced on their trip out west?” Mrs. Derkman asked the class during social studies. Many hands shot up. “Suzanne?” Mrs. Derkman said.
Usually, Suzanne would just give her answer from her seat. But not today. Suzanne stood up. She turned her face to the video camera, reached up, and wiped her forehead. Then she clutched her throat like she was in pain.
“During the summer months, the sun was strong, and sometimes the settlers didn’t have enough water to drink,” she moaned in a pained voice. “People actually died of thirst.” She collapsed on her chair and threw her head back, pretending to faint.
The class began to laugh. A few kids actually applauded. Suzanne stood up and bowed.
“Watch out, Suzanne Superstar is ready for her close-up,” Kevin teased.
ADS
15.4Mb size Format: txt, pdf, ePub