Read No Messin' with My Lesson Online

No Messin' with My Lesson (5 page)

BOOK: No Messin' with My Lesson
>>DOWNLOAD HERE >>READ ONLINE NOW
ads
“I think it’s okay to be honest if you’re trying to help someone. But you should do that in private. And sometimes it’s better to keep quiet than to say something that’ll hurt your friend’s feelings. You guys didn’t care whose feelings you hurt.”
The class stared at her. Mrs. Derkman never called her class
you guys
. She always called them children or students. Mrs. Derkman sure was acting strange.
But she was right. And the kids knew it.
At first, no one said anything. Then, Mandy turned to Kevin. “I guess it wasn’t nice to say you weren’t good in math or sports. You’re really good at basketball.”
Kevin nodded. “Thanks. And you’re amazing in math. I guess I was just mad that I got the problem wrong.”
Katie smiled at the class. “I think we should put our math books away. I have a better lesson.” She began to hand out pieces of paper. “I want each of you to make a list of everyone in this class. Then I want you to write one nice thing about each of your class-mates.”
“I’ll start with George. He’s really funny,” Jeremy said as he began his list.
“Suzanne has great style,” Becky said, writing on her paper. “And Jeremy is an awesome soccer player.”
“Zoe is a terrific artist,” Miriam added as she wrote.
“Manny has good handwriting,” Suzanne murmured as she began to make up her list.
Before long, the kids were all busy writing. Katie looked back at the contest judge. He seemed really happy to see the students interested in their work!
But would that be enough for Mrs. Derkman to win the contest? 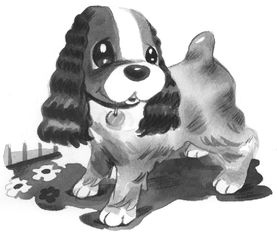 Chapter 8
Somehow, Katie managed to get through the rest of the day as Mrs. Derkman. When school ended, she was really tired. Keeping a whole class of third-graders busy and out of trouble wasn’t easy. Katie just wanted to go home and relax.
But which home should she go to? She couldn’t go to her house. Not as long as she looked like Mrs. Derkman. As she walked home, Katie began to worry. This was the longest she’d ever spent as someone else.
Katie hoped the magic wind would come back soon. If it didn’t, Katie might wind up eating dinner with Freddy Bear Derkman!
Just then, the door to Mrs. Derkman’s house swung open. But it wasn’t the magic wind that did it. It was Mr. Derkman.
“Surprise, Snookums,” he called out as he walked toward Katie. “I got out of work early.”
“Oh, hello, Mr. Derk . . .” Katie began. “I mean, Freddy Bear.”
Mr. Derkman reached out his arms. “How about a kissy-poo, Snookums?” he asked. He puckered up his lips for a big smooch. 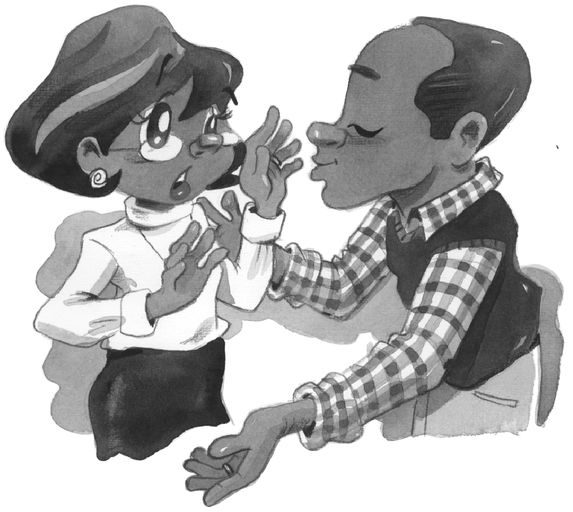 Yuck!
Katie certainly didn’t want to give Freddy Bear a kissy-poo! But how could she avoid it?
“Ruff ! Ruff !” Just then, Pepper came running over to Katie. He rubbed his back up against her knees and barked happily. Katie bent down and scratched him gratefully behind the ears.
Pepper licked Katie on the nose. He knew she wasn’t
really
Mrs. Derkman. Pepper would know his Katie anywhere.
But Snowball didn’t know who Katie was. She ran up and sniffed at Katie. Then she looked up, confused. This person looked like her human mommy, she smelled like her human mommy, but somehow Snowball knew that she wasn’t Mrs. Derkman. Snowball began to bark wildly.
“I guess she’s hungry,” Mr. Derkman said. “I’ll take her inside and give her some food.”
As Mr. Derkman went back into the house, Katie breathed a sigh of relief. Thank goodness for dogs. But Katie knew she couldn’t avoid kissing Mr. Derkman forever—at least not as long as she was
Mrs.
Derkman.
Just then, Katie felt a cool breeze blowing on the back of her neck. Katie looked up at the trees. The leaves were still. She looked down at the grass. Not a blade was moving.
The magic wind was back.
Within seconds, the wind was swirling around her like a giant tornado. Katie felt like she could be blown away at any minute. Quickly, she grabbed onto a tree and shut her eyes, tight.
And then it stopped. Just like that.
Slowly, Katie opened her eyes. She looked down at her feet. The sensible leather shoes were gone, and there were platform sneakers in their place. Instead of a skirt, Katie was wearing jeans, with laces down the sides. She put her hands to her face. She wasn’t wearing glasses anymore.
Just then, Katie’s mother came outside. “There you are, Katie,” her mother said. “How was school?”
Katie smiled brightly. She was back! “School was okay,” she said.
“Anything exciting happen?”
Katie knew she couldn’t tell her mother what had happened today. Her mother wouldn’t believe her. Katie wouldn’t have believed it either, if it hadn’t happened to her.
“Nah,” Katie said finally. “It was just a regular day.” 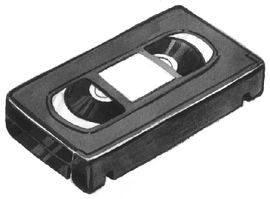 Chapter 9
Most of the kids in class 3A were already on the playground by the time Katie arrived at school the next day. But they weren’t playing or running around. They were busy watching as Mr. Kane spoke to Mrs. Derkman. The principal did not look happy.
“Your class was out of control yesterday,” he told Mrs. Derkman.
“I know,” Mrs. Derkman admitted sadly. “I’m not sure how that happened.”
“What do you mean?” Mr. Kane asked.
“Well, I mean, I know what happened. But it’s almost like that wasn’t me up there in the front of the room.” Mrs. Derkman sounded very confused. 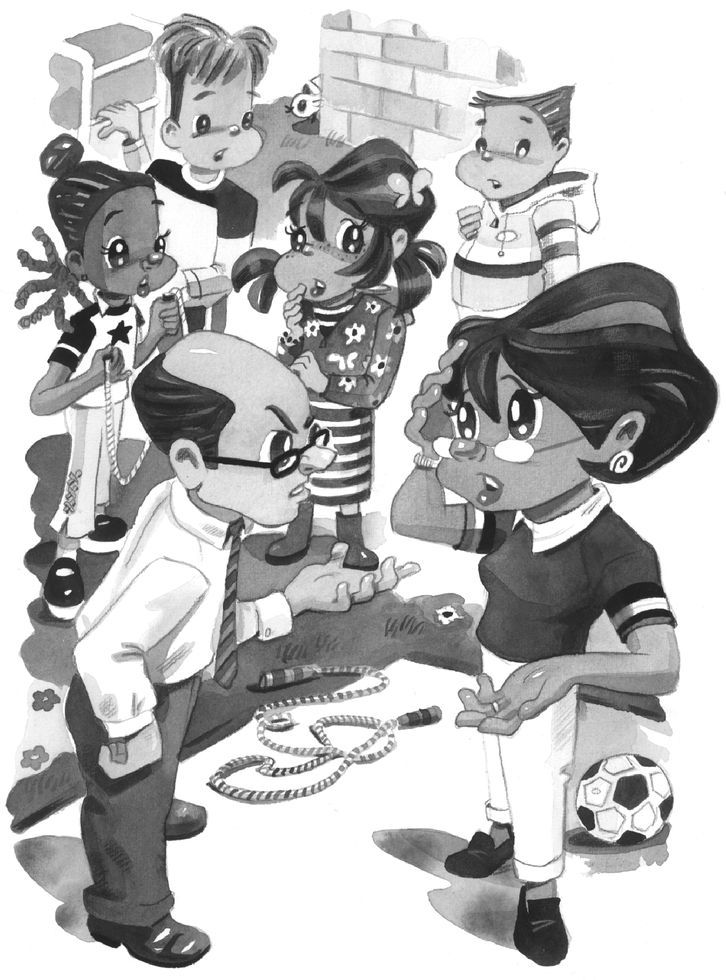 “It certainly looked like you,” Mr. Kane told her.
“It was me,” Mrs. Derkman said. “I mean, at least I think it was. But I didn’t feel like me. Oh, I don’t know what to think.”
Mr. Kane shook his head. “Well, it doesn’t matter now. It doesn’t seem as though you’ll be winning the Teacher of the Year Award this time around.”
Mrs. Derkman looked like she was about to cry.

“Boy, Mrs. Jerkman looks unhappy. Mr. Kane must be really mad at her,” George told the other kids.
“That’s not nice, George,” Katie said.
“What?” George asked her.
“Calling her Mrs. Jerkman,” Katie told him.
“We always call her that,” Kevin said.
“It’s still not nice.”
The other kids stared at Katie.
Was she really standing up for their teacher?
“Mrs. Derkman isn’t nice to us, either,” Suzanne reminded Katie. “She’s very strict. And she gets mad a lot.”
“That’s because we’re not always very good in class,” Katie reminded her. “We pass notes and whisper.”
“Yeah, well, Mrs. Derkman writes notes, too,” George argued. “She sent one to my mother last week. And it wasn’t a nice note, either!”
Katie rolled her eyes. “What about yesterday?” she asked the kids. “Everybody was yelling at each other during math. The judge from that contest saw the whole fight.”
“How do you know what happened?” George asked Katie. “You were in Mr. Kane’s office all day.”
Of course, Katie
had
been in the classroom. But she couldn’t tell the other kids that. So, instead, she said, “I heard about it. It sounds like everyone was mad at each other.”
“But we made up,” Mandy told Katie. “And we wrote nice things about each other. The judge from the contest saw us doing that, too.”
“Yeah, he seemed happy about that,” Miriam added. “He was really smiling when he left.”
Katie shrugged. “But he wasn’t happy enough to make Mrs. Derkman the Teacher of the Year. She really wanted that award. We blew it for her.”
“She blew it for herself,” George said. “She jumped up on a desk and whistled. If I did that, she’d send me to the principal’s office.”
“Yeah,” Kevin agreed.
Katie gulped. George was right. Maybe if she hadn’t jumped up on that desk, Mrs. Derkman would have had a chance. Now Katie felt worse than ever. “Mrs. Derkman deserves that award. She works really hard. Her feet hurt at the end of the day,” Katie insisted.
Jeremy looked at her strangely. “How do you know?” he asked.
“I . . . er . . . well, she stands up at the board so much, I just figure they would hurt,” Katie said quickly. “Besides, Mrs. Derkman might not be the nicest teacher in the school, but we learn a lot with her. We’re the only class who studied geography this year. And we’re the only ones who got to do research projects on things that interested us.”
The kids couldn’t argue with that. They
had
learned a lot in third grade. For a minute, everyone was quiet.
“We should make it up to her,” Mandy said finally.
“I’m going to try to be extra good today,” Miriam vowed.
“Me, too,” Zoe agreed.
“I guess I will, too,” Kevin said. He turned to Suzanne. “That means you can’t ask me to pass any notes to Katie.”
“I won’t,” Suzanne agreed. “I’m not going to write any notes today.”
It sounded like everyone was going to try to make Mrs. Derkman happy today. Everyone except George, that is. He hadn’t said anything about being good in class. All the kids turned to look at him.
“Why are you all staring at me?” George asked.
ADS
15.4Mb size Format: txt, pdf, ePub