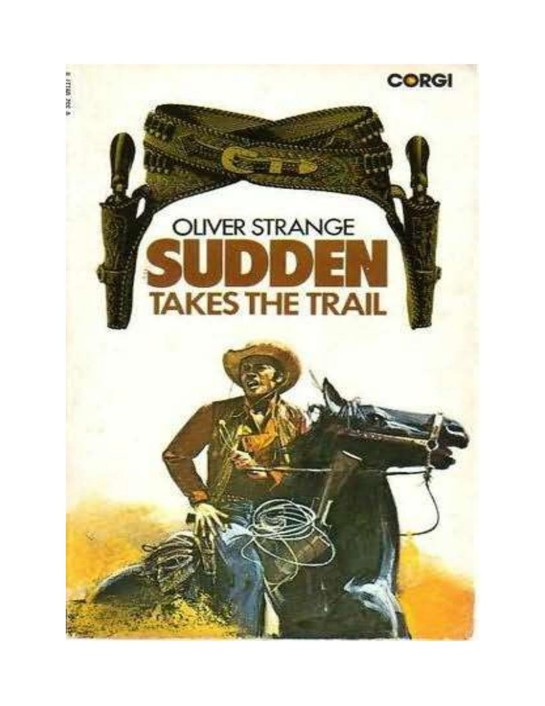 (Book 08 in the
Sudden Westerns series)

“MURDERER!”
The man on the big horse spoke the word aloud,
and never had the sound of it seemed so sinister, for he was applying it to
himself. Then, as had happened many times in the past few days, his moody gaze
swept over the vast expanse of semi-desert he was crossing. High overhead, an
eagle, winging its unhurried way against the pale blue sky, was the only
visible evidence of other living creatures.

“Reckon
we’ve razzle-dazzled ‘em, of hoss,” the rider went on.

The
black head of the animal came round to nuzzle its master’s knee. He bent and
stroked the silken nostrils.

“Fella
can get away from his own kind but not from hisself,” he mused. “Mebbe I’d
oughta stayed an’ took my chances, but hell!
there
warn’t no chances.” His mind slipped back to that fatal evening only a week
before, recalling the scene and the swift sequence of events which had forced
him to flee for his life.

Absently
he searched a vest pocket for cigarette papers and discovered a metal star
which, in the bright sunlight, seemed to wink at him maliciously.

“Runnin’
off with the marshal’s badge makes me a thief too,” he said with a mirthless
smile. “Shucks, they can buy another with the pay I didn’t collect.” He had
been peace-officer of Pinetown for some months, and his habit of doing thoroughly
any task he undertook speedily made him unpopular with the unruly—and larger—section
of the community. But if they hated, they also feared this hard-faced stranger,
who bore a name which bred hesitancy in the boldest when it came to defying
him. For this was
Sudden
, cowpuncher, gunman, and
outlaw, whose speed on the draw and accuracy of aim with a six-shooter had
earned for him an unenviable reputation in the South-West. Because of it, he
had been appointed marshal, for only such men could maintain any semblance of
decency and order in a land where every man carried his own life in the holster
slung at his hip.

“Masters
is in trouble at Miguel’s.
Hurry.”
He heard again the
whispered message which a white-faced boy had crept into the saloon to bring,
sent by a man whose face the messenger could not see. Sudden had not hesitated.
What was Dave doing in Miguel’s—a squalid hovel owned by a Mexican, where the
vileness of the liquor was equalled only by the scum who consumed it? Outside
the saloon, he had paused a moment to allow his eyes to adjust themselves to
the darkness before stepping swiftly along the boarded sidewalk. Then, in a few
tense seconds, the tragedy happened: the shadow of a building across the street
was stabbed by two shafts of flame, an in-visible hand seemed to snatch at
Sudden’s hat, and the wind of the other bullet fanned his cheek. Instantly his
guns were out, spitting lead at shapeless deeper patches of shade, and a groan,
followed by a curse, told him he had not fired in vain. A point puzzled him; if
these were the men he suspected, there should have been three shots.

Then
came
the clatter of hastening feet from behind. He
whirled round, peering through the gloom, and as the indistinct figure stumbled
past a lighted window he caught the gleam of a drawn gun. This must be the
other man. His weapon spoke again, and he smiled grimly as he heard the thud of
a falling body. For a brief space he waited, watchful, alert, but no more shots
came and he retraced his steps. It was plain now that the message had been but
the bait to lure him into an ambuscade, but he wished to make sure. A form,
sprawling untidily face downwards on the sidewalk, arrested him. He stooped and
struck a match. The hat had fallen off, and the upper half of the head was an
ugly blur of red, but one glance told him that he had shot the only man in
Pinetown he could call a friend.

“God!”
he muttered, and in a broken voice, “Dave, I never dreamed it might be yu. I’d
sooner …” His stunned faculties began to function again as he became aware of a
stir in the quiet street; heads were protruding from newly-opened doors.
Shooting was common enough—noisy revellers frequently expressed their emotion
hy emptying their revolvers, but four quick shots followed by a single one pointed
to something different. Sudden stood up; he must get away, and speedily. He had
slain one much more popular than himself, and with whom he could have no
quarrel; his many enemies would see that he paid the extreme penalty.

He
was not minded to give them this satisfaction, and though his heart felt like a
stone, he hurried to his quarters for rifle, saddle, and horse. When he emerged
upon the street again he was recognized and a yell of execration came from the
crowd round the body.

“There’s
the dawg what done it, that butcherin’ marshal,” shouted one who was nursing
his right arm. “Never give the boy a chanct.
Git him, fellas!”
A rush was made, and shots followed, but the light was poor; with a gesture of
contempt, the fugitive vanished into the night.

Pursuit
had been prompt and patient, but Sudden’s Indian upbringing stood him in good
stead and he was now satisfied that he had succeeded in throwing the posse off
the trail. His body was free, but his mind was fettered by a merry, impudent
face which grinned at him, mockingly, as it now seemed.

From
a near-by sage-bush a rattlesnake—disturbed by their approach—reared its ugly
head and sounded a warning. Instinctively the rider’s right hand went to one of
the walnut-butted weapons in his belt, only to drop away again.

“Hell,
no,” he said bitterly. “Can I do nothin’ but kill? If it had been that whelp
Javert now …” The name of his chief enemy in Pinetown brought a brooding frown.
Javert’ the gambler,
whose
crooked play he had
exposed, thus earning the fellow’s undying hatred; cunning, malignant, and
cold-blooded as the reptile Sudden had just refrained from destroying. He it
was who had planned the marshal’s murder and so brought about Dave’s death.

“I’m
thinkin’ a long whiles afore I draw a gun on a human bein’ again, but that don’t
go for yu, Mister Javert; yu ain’t human.” The low voice, devoid of passion,
made the threat doubly menacing.

“So
Welcome is shy a marshal?” the customer said meditatively, as he stowed away
the sacks of tobacco he had asked for.

The
girl behind the counter nodded. “They got a meetin’ about it—dunno why, seein’
there’s only one applicant,” she replied.

“The
job don’t
appear to be popular,” he remarked. “It’s
unhealthy,” she told him. “Our marshals seem to be
unlucky,
we’ve lost a couple in less than a year.” The man’s eyebrows rose.

“Our
boys ain’t so bad—mostly,” the girl defended. “It’s the no ‘count visitors what
drift in.” She saw the dawning grin and blushed hotly. “O’ course, I ain’t
meanin’ ”

“
Shucks !
” the customer said gently. “Where did yu say this
meetin’ was?”

“At
the Red Light Saloon—Ned Nippert, the owner, more or less runs Welcome.
you
ain’t thinkin’ of ?” She
stopped,
unaware that she was forgetting her Western upbringing.

“Why
not?”
came
the unresenting reply. “I’m foot-loose ‘bout
now, an’ a fella has gotta eat.” He put down a bill and pushed back the change.
“Buy yoreself a pretty,” he smiled, and went out.

The
girl’s gaze followed him reflectively. “A cowpuncher, ridin’ the chuck-line,”
she decided. “I hope he
don’t
get that post—he couldn’t
hold it.” Meanwhile, the object of her concern, having noted the name over the
door, and mounted the black horse, was leisurely making his way to the Red
Light. It proved to be a fair-sized building, constructed of timber and ‘dobe,
with a raised covered veranda in front. On this five men were sitting round a
table bearing a bottle and glasses. The visitor got down and stepped towards
them.

“I’m
lookin’ for a gent named Gowdy,” he opened.

A
stocky man with a wellnigh bald head stood up. “You’ve shorely found him,” he
said.

“Just
bought some smokin’ at yore place,” the messenger explained. “Yore daughter
asked me to mention that she’s waitin’.”

“Cuss
it, I clean forgot,” Gowdy exclaimed. “Ned, can’t we settle this business now?”
The big, red-faced fellow to whom he appealed shrugged his massive shoulders. “Seein’
there’s no other candidate, I s’pose we gotta appoint Jake Mullins,” he
replied.

In
his tone was a very evident reluctance which was apparently shared by three of
his companions, to judge by their silence. The fourth was Jake himself, a tall,
big-boned, sallow-faced individual, with small eyes, thin lips, and snaky black
hair which suggested mixed blood. The newcomer made a quick decision.

“Sorry
if I’m hornin’ in, gents, but I hear
yo’re
needin’ a
marshal,” he said quietly.

For
a moment the only reply he received was a scowl from Mullins; the others were
studying him with surprised curiosity. Nippert unconsciously betrayed his
thought with a shake of the head.

“It’s
a risky job,” he pointed out. “Unless you can handle yore hardware above the
average
… .”

“I
don’t go much on gun-play,” was the reply. “I’m what yu might call a methodis’
an’ ”
A guffaw of mirth from Jake cut him short. “A psalm
singer, huh?” he sneered. “Prayer an’ fastin’ won’t land you nowhere in this
man’s town, brother, ‘cept mebbe the cemet’ry.” The grey-blue eyes behind the
goggles surveyed him sardonically. “Yu got me wrong. I’m not strong on
religion, but I have my own ideas o’ dealin’ with trouble; shootin’ ain’t allus
the best way.”