Read Out of Heaven's Grasp Online

Out of Heaven's Grasp 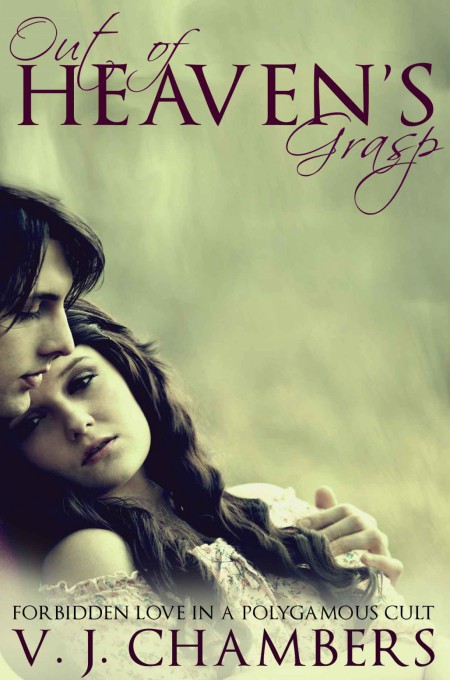 Out of Heaven’s Grasp

a novel of forbidden love in a polygamous cult

Abigail London has always trusted the elders in her strict polygamous community to decide who she would marry. After all, they’ve got a direct line to God, or so she’s always been taught.

But when she is caught holding hands with Jesse Wallace, the elders bring down punishment swiftly and severely. They banish Jesse from the community, telling him never to return. They assign Abby to an older man, who already has three wives. They tell her that submitting to her new spiritual head will curb her willful nature.

Abby wants to please God by forgetting Jesse and doing as she’s told. But she can’t shake the feeling that this is somehow… wrong. And she’s beginning to doubt the wisdom of the elders.

Separated, Jesse and Abby struggle alone—him to find his way in a secular world he doesn’t understand, and her to accept her place and submit obediently. But eventually, they both realize they must embrace a more difficult struggle: to find each other again.

Please do not copy or post this book in its entirety or in parts anywhere. You may, however, share the entire book with a friend by forwarding the entire file to them. (And I won’t get mad.)

OUT OF HEAVEN’S GRASP

a novel of forbidden love in a polygamous cult

“I think that’s Jesse Wallace’s truck,” said my best friend Susannah, looking out the window in the schoolhouse. She and I both volunteered there as teachers for the younger children in the community. “Is it Wednesday today?”

I straightened up, trying not to look to obvious, and peered out the window. “Yeah, that’s his truck, all right.”

I glanced down at her. “Oh, you’re fine, Charity. You’ve got it.” I smoothed my hair out of my face, checking to make sure that my braid was tidy. I ran my hands over my clothes. “I’ll go out and help Jesse.”

From the front of the room, Doris Kelby raised her eyebrows at me. She was the head teacher, the oldest among us. She’d been married nine months ago, and her first pregnancy was just starting to show. “Really, Abigail, if you’re busy with Charity, Susannah can unlock the shed for him.”

Charity knitted her tiny eyebrows together. “But—”

“You’re fine,” I told her firmly. I darted across the room to the door, taking the key to the shed off the hook, and then I hurried outside before anyone else could say anything.

My heart pattered against my rib cage, my fingers sweating as they grasped the shed key. With my free hand, I smoothed my hair again. Taking deep breaths, I watched as Jesse pulled his truck into the driveway. The dust kicked up behind his tires, clouding the Texas landscape of scrub brush and—further in the distance—craggy mountains. There was a fierce beauty to the place we called home. Nature was sharp here, extreme. But sometimes, watching the bright reds and oranges screaming across the sky as the sun set, it caught me somewhere inside my heart, like an ache.

Jesse pulled the truck to a stop and killed the engine. I could see him grinning at me through the windshield. He opened the door and jumped out. “Well, hello there, Abby.”

We grinned at each other a few minutes—both of us smiling too widely and staring for too long.

Jesse Wallace brought fuel for the schoolhouse generator every Wednesday. In our community, we followed the teachings of the Life, and because of that, we kept a simple and separate existence from the rest of the world. We didn’t have electricity come in through the wires, because that would have connected us to the wickedness outside, and we all eschewed worldly things.

We didn’t use much electricity anyway. No electric lights or heat. Most families ran their refrigerators off of gas, same as their stoves. But nearly every family had a generator anyway. The schoolhouse used ours to run a few fans in the windows. They didn’t banish the heat, but they made things more comfortable. The Wallace family was supplying the generator fuel for the schools this year, and Jesse Wallace came every Wednesday to refill it.

Jesse was pretty much the most handsome boy I’d ever seen. He had dark hair and light blue eyes. Our community didn’t believe in cutting our hair, since it made us all closer to our natural state, just the way God made us. So, all the men had full beards. But Jesse’s beard was light, made of fine hair that I always wanted to touch. He didn’t have the kind of bushy face that some of the other men did. I could see the outline of his strong jaw, see the dimples in his cheeks when he smiled.

I couldn’t think of anything nicer than staring at Jesse all day.

And whenever I saw him, he always seemed to want to look at me.

He broke first, looking down at the ground. “Uh, good to see you.”

I looked away too. I smoothed my hair back again and looked up at the sky. “Well, I guess I’ll run ahead and unlock the shed for you.”

“Thanks,” he said, flicking his gaze up at me and then back away. He was still smiling, but there was guilt in his eyes.

And I felt it too.

This was wrong. We weren’t meant to interact this way, and we both knew it. In our community, men and women were to keep apart unless they were married to each other.

How I dreamed of marrying Jesse. We were both old enough, both eighteen. I knew that Jesse’s father had enough land that he’d give Jesse a plot to farm if he got married.

As I walked back to the shed, gripping the key, I imagined the two of us in our own little house, me sitting on the porch strumming my guitar after dinner, him staring up at me as I sang to him. A tiny shudder went through me at the deliciousness of the thought.

But it was also a forbidden thought, and I knew I shouldn’t allow myself to daydream about such things.

In our community, the elders received revelations from God about who should marry who. Our marriages were arranged by divine direction. The fact that I liked Jesse wasn’t important. I would marry who God wanted me to marry, not who I wanted. I knew this.

I stopped at the shed and fitted the key into the lock. We never used to lock the shed at all, but lately, Gideon and the elders had been on a rampage, making sure any place that illicit lovers could get into was blocked off and impossible to get into. I wasn’t complaining, since it gave me an excuse to see Jesse every week, even if it was only for a few minutes. However, it did seem to me that Gideon was obsessed with the idea that everyone else was doing impure things. Honestly, the more he talked about how we needed to resist those kinds of thoughts, the more often they seemed to cross my mind.

I swung open the door of the shed.

Jesse was right behind me, lugging along two cans of fuel.

My heart stopped. His eyes. Those dimples.

He stopped moving, and he was standing right next to me. There was less than a foot between us. I let my eyes wander over his broad shoulders and his tanned forearms. The sleeves of his shirt were rolled up against the heat, even though it was technically against the rules for any of us to allow that much of our skin to be uncovered. His skin almost seemed to glow, and my breath caught in my throat.

His lips parted, and I watched his gaze skitter over me for a minute. Then, with effort, he focused his eyes on my own. “Uh…” He made a gesture with his head.

And suddenly I realized why he’d stopped moving. I was standing right in the doorway to the shed.

I was in his way!

Heat rushed to my face, and I hurried to let him by. “Sorry,” I mumbled.

“Don’t be.” He stepped into the shed and set down the cans of fuel. He looked up at me. “You have nothing to be sorry about.”

I snapped my neck up to see that Doris was watching the two of us through the window. I felt ashamed, even though I hadn’t been doing anything except looking at him. Still, I knew in my heart that I was sinning, and we were taught that sinning in the heart was nearly as bad as doing it in real life. I gulped.

“I think Jesse can lock the shed up himself,” said Doris. She narrowed her eyes at him. “Can’t you?”

“Give him the key,” said Doris.

I held it out to him.

He took it out of my hand, and our fingers brushed.

Tingles traveled up my arm, rendering me motionless for a second.

I turned away from him, struggling against the pounding of my heart, which was banging wildly out of rhythm. Without looking back or saying goodbye, I marched back into the schoolhouse.

What was that boy doing to me?

“Well, I don’t know who that Gideon Walker thinks he is,” said my father as he attacked his potatoes with his fork. “He’s acting like he owns the place, but if I remember correctly, he was sent here from the community in Kentucky because he needed spiritual guidance. Now he’s offering guidance to the elders? It doesn’t sit well with me, I tell you.”

I set down my fork. “Oh, absolutely, Father.”

My father glared at me. “Absolutely what?”

My father’s face darkened. “You didn’t hear a thing I said.”

“Sure I did,” I said. “You were talking about Gideon, how he’s taken over as the leader of the elders.” Gideon had shown up in the community nearly a year ago. He’d been sent from one of our sister communities in Kentucky as a disciplinary action. Apparently, Gideon had kicked up trouble there. Ever since getting here, though, he’d been devout and perfect. So much so that the elders had begun turning to him to help them settle matters. There were six elders, and sometimes there were ties among them. Gideon only served as a tie breaker, at least that was what he claimed. Gideon was a strange choice as a leader of the elders, if only because he wasn’t, well, old. He was in his mid thirties, and he only had one wife. The elders all had three, which was basically the limit of how many wives a man could have. My own father only had two wives.

My father snorted. “Well, maybe you were paying a little bit of attention. Amazing, though, because it’s about the only thing you’ve done recently that hasn’t been worthless.”

The Riddle Of The Third Mile by Colin Dexter
Tiempo de cenizas by Jorge Molist
The Treacherous Teddy by John J. Lamb
Shimmer by Hilary Norman
Demon Hunting In the Deep South by Lexi George
Slipperless by Sloan Storm
Betsy and the Boys by Carolyn Haywood
Runner by Carl Deuker
Colossus and Crab by D. F. Jones
Zombie Ever After by Plumer, Carl S.