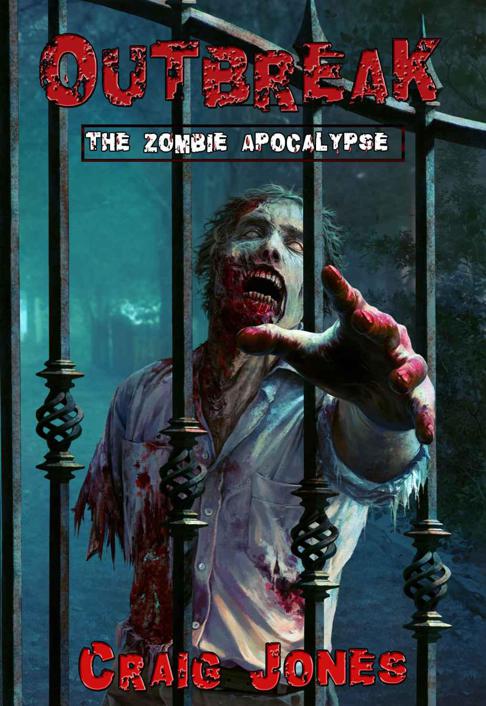 Pants On Fire Press
, Winter Garden 34787
Text copyright © 2014 by Craig Jones
The right of Craig Jones to be identified as the author of this work has been asserted in accordance with the Copyright, Designs and Patents Act 1988.

All rights reserved. No part of this book may be transmitted or reproduced in any form by any means without written permission from the publisher, Pants On Fire Press. For information contact Pants On Fire Press.
All names, places, incidents, and characters in this book are fictitious, and any resemblance to actual persons, living or dead, is purely coincidental.

Illustrations and art copyright © 2014 by Pants On Fire Press

The publisher is not responsible for websites (or their content).

For Claire and Shane

The public didn’t take what was going on seriously until the government cancelled football matches and they stopped filming
EastEnders
. Yes, the first incidents were on the news, but no one thought they were any more than a couple of one-off events. It was only when the doors were closed at the Queen Vic and the Merseyside derby was postponed did we start paying attention.

Since 9/11, we had all become too familiar with the concept of violence, to the point that it kind of didn’t hold its meaning anymore. So the news story of the well-dressed, clean-cut businessman who got off a trans-Atlantic flight to Heathrow and then became violent didn’t initially have us scouring the internet for bootleg security camera footage. Just another drunk taking full advantage of the corporate credit card. I guess some people might even have assumed it was a British politician arriving home from a taxpayers’ treat.

Then a report of a similar outburst in Brighton, in Liverpool and then, getting a little closer to home, in Newport. More details of what was happening emerged: people would feel ill, collapse even, but would lash out at anyone who came to help them. Was it terrorism or some sort of epidemic? Suddenly, this was big news, not just on the television, but in everyone’s inbox.

I thought the first email was a sick joke. I only opened it because it looked like a legitimate email sent to an account only my close friends knew: [email protected] It was video footage from a CCTV camera on Church Street in Liverpool. The image was grainy, but good enough so you could make out it was a busy shopping day. On first viewing, all you picked up on was a sudden movement to the left of the screen, but if you rewound it and watched it again, knowing where to look, you would see the woman.

She was tall, blonde and elegant. She walked with confidence, her head up, knowing that she was drawing a few admiring glances. Then you saw her slow her pace, stumble, and fall face-first onto the concrete. For a second afterwards, those around her stop and just look, then some move on and others bend to offer help. There are too many people; you can’t see if she is sitting up or even moving.

You see one man shake his head, pull out a mobile, and suddenly throw himself backwards, the phone flying out of his hand, up into the air. If you paused it right there, you saw the blonde woman re-appear for a micro-second, her head bulleting into frame, teeth snapping at the phone, missing, but catching the tip of the man’s little finger before a scrum of arms and bodies haul her back to the floor. The man himself falls over backwards, spraying an arc of blood across anyone close by him. The first police officer on the scene, strangely in full riot gear, appears at the furthest point the camera covers, and the clip ends.

I watched it three times, wondering how they had made it look so real. Then I started trawling the web for more. The Heathrow incident was right there on YouTube, or at least the start of it was. The camera tracks side to side over an exit door at Arrivals. A man in a tailored suit enters the shot from the left, heading towards the door. He is carrying what looks like a leather holdall and is walking at a pace that will keep him in shot even as the camera continues to pan away to the right. But then, as you watch it, you realise he has stopped, and you don’t see him until the camera pans left again. It brings him back into focus but he’s now down on his knees, and another businessman sidesteps him, doesn’t even give him a second glance. He certainly doesn’t offer to help.

The camera pans right again, away from the men, then left. The second businessman is now also on the floor, gripping his right ankle and shin, pushing himself away with his other leg as the first man, now up on his hands and knees, holds his left hand up in front of his face, fingers spread, jaw moving like he was chewing a huge ball of gum, and then he licks what can only be blood from his fingers. Again, the camera view moves. And back again. And now armed police have surrounded him, but his face shows no fear as the clip ends. Before I had chance to play it again, the website had pulled it.

I turned on the news channels and started to get used to words like
epidemiology
and
pathogenesis
pretty quickly. Whatever this was, it was spreading. It was contagious. It was without doubt dangerous. We were advised to stay indoors, not to travel. We were
definitely
not to travel alone. We were asked not to panic. No one knew if this was man-made or not.

If we lived in a rural area, we were told to stock up on supplies from local sources and sit it out; don’t clog up the roads in case emergency services had to get through. It was all very low key, and if you hadn’t seen the footage from the internet, then you believed it. Without bothering to switch the news off, I headed upstairs to wake my brother.

My brother Danny and I had locked down the house, and he had then switched on the PlayStation and hadn’t stopped gaming since. I had padlocked the gates with two of our motorbike security chains and, as they opened inwards to the courtyard, had parked the black Range Rover parallel to them, too, keeping the driver’s door accessible in case we had to use it at a moment’s notice.

The wall that made up our perimeter was solid; the wrought iron gate, painted black with the individual struts about three inches apart, was the only way in or out. The house, just outside the village of Usk in Gwent, had been our family home forever. To say we lived in luxury was an understatement. Dad had patented some bracket that was used in pretty much every car out on the road and we had lived off the royalties ever since.

Ironically our parents had died in a motor accident over three years before, but they had made sure we would never want for anything, and we kind of took it to the extreme. Neither of us had worked since; why would we? We had cars, bikes, the house, and a regular income. We had our food delivered on a weekly basis, and the guy from Tesco had been around the day before all this kicked off. We’d both gone to a private school, but I had fared less well in the real world of university. I had lasted about four weeks before I realised I didn’t need to be pushing myself through the hard work and dropped out.

I suppose I could have had at least made the effort to fail my first year exams, but engineering had not been for me. Not when I knew there would always be enough money in the bank account for Danny and I to take life as easy as possible. I kept the garden in order, did most of the cooking, and since Danny had turned seventeen we had gotten rid of the domestic staff that our parents’ solicitor had put on retainer. Was that not enough for me to be getting on with? Was I really a nineteen year old underachiever if I was loaded? Dad had grown up with nothing, so it would have been gratifying for him to know that we would be in a position where we could wait for our life’s calling to come along.

Funny thing, it never did.

Not that we went looking for it. It turned out that our lack of drive and motivation would keep us safe. We could have been in a city, near one of the outbreaks when it all started, and that would have been it. Instead we were doing what we always did, where we always did it, and we could sit tight and wait it out.

Except this was the one thing that refused to pass us by;
people
refused to pass us by. It wasn’t even our neighbours. They spent every winter in Portugal, had done ever since old Des had retired, putting their dog into long-term kennels. But despite us being pretty isolated, people came. Wanting something. Needing help. I guess if there was one thing we had learnt from living this lifestyle, it was that if you could help someone then you did. Our parents had taught us a few life skills, after all.

We watched the road that afternoon, the tree-lined route from Usk to Caerleon, from the upstairs window, and when the car stopped at the gates we could see there were kids in the back. What were we meant to do? There was no way we would be opening the gates, but there was a ladder in the shed.