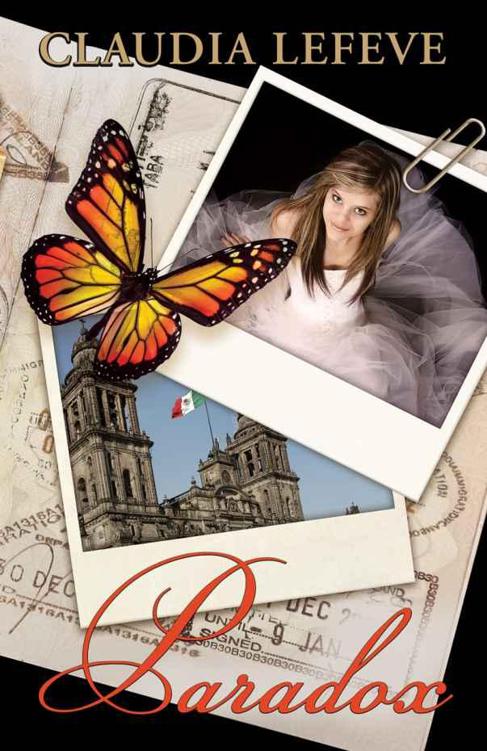 PARADOX is a work of fiction. Names, characters, businesses, organizations, places, and events are either the products of the author’s imagination or are used fictitiously. Any resemblance to actual persons, living or dead, events or locales is entirely coincidental.

“Let your soul stand cool and composed before a million universes.”

Chapter One
Here Comes the Bride

I
can’t help but continue to gawk at the simple silver ring displayed on his left hand. Is he freaking kidding me? I can pretend all I want, but I know I heard Cooper correctly, the ring on his finger is proof enough. I’m his wife.

After revealing the big news, neither one of us have bothered to move from our spot on the outdoor deck. It’s one of my favorite areas in the house, but it’s also the stage for surprises and secrets. As of late, it appears to be the setting for all my private conversations with Cooper. Some of the moments we’ve shared I’ve enjoyed, while others, like the bombshell he just dropped, is enough to make my heart race.

I stop staring at his ring long enough to glance up at the sky above, remembering all the times I used to gaze up to view the stars and dream about belonging to a family. Now, not only have I been reunited with my family, but I have a husband to boot. Tonight, the moon is barely a sliver, peeking through the mist of clouds rolling in. It’ll be few more weeks before it’s a true full moon, but for now the backyard remains dark, so I can’t really see Cooper’s expression as I look back at him.

“I’m what?” I say, taking my time to comprehend his doozy of an announcement. In the last week, I’d been given a crash course into the history that is my life: the source of my telekinetic powers, having the ability to jump between realities, finding out I can also astral project, not only in the present, but through time. But this little tidbit of information is like a sucker punch to the gut. I can hardly breathe.

I remove myself from Cooper’s hold and take a step back. “You mean you’re married to another version of Etta. Right?” This is the only reasonable explanation I can think of. It has to be. Then again, nothing I’ve learned this last week has had a rational explanation. First off, I’m not even eighteen, yet here’s Cooper talking about marriage. Second, how does this even happen? I mean, I admit to having a small—well, okay, a major crush on Coop, but married? In what reality is it socially acceptable for an almost-eighteen-year-old to be married off?

“No, I’m pretty sure I’m married to you, darlin’.” Cooper leans in, closing the gap between us.

This is so not what I expect to hear—still wanting to believe I heard him wrong—and I can tell by the lilt in his twang he’s having fun delivering this bit of news. I take another step back, distancing myself from the closeness. “Me, me?” I say, pointing to myself. “Just to be clear, not another version of me?”

“Yes, you.” Cooper takes a step forward in my direction, bridging the distance between us again. If the subject weren’t so serious, I’d laugh over our fancy footwork. It’s almost like dancing the tango, the way we keep stepping back and forth. While I can tell he’s secretly enjoying this, his expression is all serious. He’s standing dangerously close to me and his familiar scent of licorice and cloves never fails to stir up feelings I’m not quite sure I know how to handle. I’m not very experienced when it comes to sex, so my body is talking a language my mind doesn’t comprehend yet.

I push him, as well as the lusty thoughts swirling around in my head, away. “Don’t you think we could have gone the rest of the evening without any more surprises?” Just this night alone, I find out my best friend’s dad is a psychopathic military dictator in another reality, I’m the leader of some Council set to destroy my best friend’s dad, I finally locate
my
dad who’d been kidnapped by my best friend’s psychopathic dad, and the icing on the cake: I find out I’m married to Cooper. I feel like the whole twenty-four hours has been like this great big Kansas tornado that’s propelled me into a world I’m still desperately trying to figure out.

“Sorry to drop such a bombshell on you.” He takes my hand. “Yeah, I heard your thoughts,” he says, before I can say that’s exactly what I was thinking. “I hope you’re not freaked out by all this.”

“It’s just a lot to think about, that all.” I want to ask him all about the specifics, but after the night I’ve had, I’m just too tired to get into it. “I think I need to go to bed now,” I say.

It’s like I’ve been thrust into a haze, trying to escape this perpetual dream I can’t seem to wake-up from. Though I’m dying to know more, the thought of a good night’s rest is exactly what I need to absorb all the information that’s been dumped on me. I’ll probably toss and turn all night, but at least I’ll have a chance to mull everything over.

“You’re probably right. It is getting late and you’ve had a lot happen to you these last few of hours,” he agrees.

The fog clouding my mind disappears for a moment and I instantly regret saying anything at all. I don’t really want to go upstairs and “sleep on it.” What I really want to do is stay here and talk with Cooper. Every time he leaves, it’s like a little bit of me cries out in protest. But I know he’s right. Despite my confusion of the night’s events and my need to talk this out, I decide it’s probably better to just go upstairs and head off to bed. My brain is chock-full of information and I tend to think better right before I fall asleep anyway. Besides, Aunt Maggie invited both Cooper and April to stay the night due to the late hour, so I’m sure I’ll have a chance to question him in the morning.

It takes all of two seconds for me to get ready and head downstairs. Taking time to look presentable has never been one of my strong suits, so that’s not saying much. I probably could’ve slept in all morning, if it weren’t for the aroma of coffee wafting all the way up to my room. In a flash, I do a half attempt at scrubbing my face and a quick brush of the teeth.

I look over at my closet and decide I’m too hungry to actually make an effort to change into something more presentable. It’s Saturday morning, after all. I don’t think anyone will be offended if I show up to breakfast in my p.j.’s. I do a double check in the full-length mirror to make sure there aren’t any holes or stains on my top before I go barreling down the stairs to get my coffee fix.

If I was only half awake before, courtesy of the coffee alarm, the other smells coming from the kitchen are enough to catapult me into full alertness. My Aunt Maggie certainly outdoes herself this time. She makes good on her promise of blueberry pancakes for breakfast, complete with a heaping side of home fried potatoes and bacon. When does she find the time to cook along with all her other responsibilities? It really is second nature to her to create sinful and gluttonous meals. If I was skinny a week ago, when I first arrived in this reality, I’m filling in nicely now, thanks to the few extra pounds I’ve put on being exposed to all this food.

It looks like I’m the last one to come down for breakfast. The kitchen looks like a repeat of last night, with everyone having gathered around the kitchen table. All present and accounted for, ready to start the day.

I eye Cooper as I take my seat at the table. Is he going to make the grand announcement about our pending marriage or is he expecting me to? Or was last night’s revelation about us being married supposed to be kept secret? He’s not returning my stare, but I can tell he knows I’m watching him by the way he’s purposely avoiding me. I decide not to say anything about being betrothed in front of everyone and instead, take a heaping helping of potatoes.

“So,” I start abruptly. “When do I get to find out about being a traveler?” I know a little bit about traveling from Cooper and my aunt, but I didn’t know I actually was one until April, a.k.a. Miss Stone, my physics teacher, came over to the house to tell me she’s some kind of assigned advisor to me. She’s not one of my favorite people, so imagine my surprise when I found out I’m not only a traveler, but I’m stuck with her as my guide. I don’t know what it is about her, but she always gives off the impression she’d rather be somewhere else. There’s something about the way she interacts with me that rubs me the wrong way.

April takes this as her cue. “We begin today,” she says, after swallowing a big bite of her pancakes.

This soon? She’s always so grumpy, I figured she’d have me wait awhile before teaching me the ways of the traveler—like, she knows how much I want to learn about my future, but will purposely delay my instruction just to spite me. I already learned a bit on how to use my telekinetic powers from Cooper and got a brief introduction on astral projection from my dad, but I’m sure there’s more to being a traveler than that—like actual traveling to other realities. Still, she looks like the kind of person who’d stall on purpose, just to get back at me for having to wait for my arrival in this reality. Apparently, the other reality sent her here under the guise of my teacher at Dominion Hall Academy. To hear her tell it, she waited for what seemed like forever before Cooper brought me from the hell I once knew as Dominion House for Girls.

“It’s Saturday, so I have an extensive two day lesson planned for us,” she continues.

Crap.
She’s going to be harder on me as an advisor than she is as my physics teacher. Somehow I get the feeling this is going to be worse than her delaying my studies. How’d I get stuck with her in the first place? It’s like some kind of cosmic joke if you ask me.

“I at least get to finish breakfast, right?” I know I’m not being fair to April, but I don’t want her to get the idea that she can push me around.

Aunt Maggie tries to lighten up the mood. “Etta, I’m sure April will be a fantastic advisor.” Leave it to my aunt’s subtlety to remind me to mind my manners. She’s one of the kindest persons I’ve ever met. When she found out I’d been sent to another reality for most of my life, she welcomed me back with open arms.