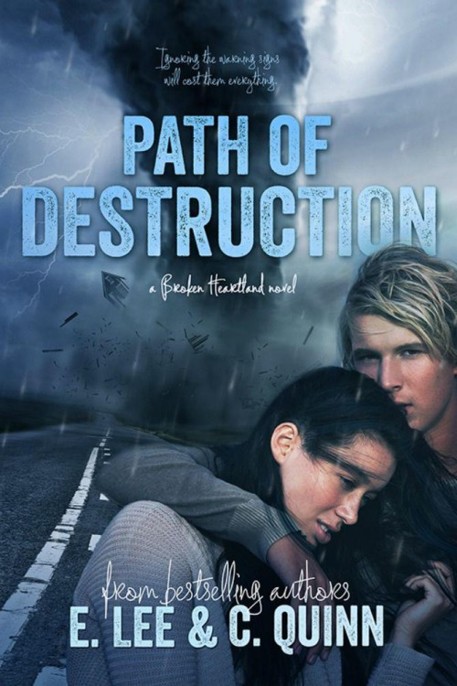 For those who left this world far too soon and the ones you left behind.

Once the storm is over, you won’t remember how you made it through and how you managed to survive. You won’t even be sure whether the storm is really over. But one thing is certain. When you come out of the storm, you won’t be the same person who walked in it.

While nearly every single town in and around Calumet County suffered some type of damage from Saturday night’s storm, one high school in particular suffered major damage drastically more significant than the rest. The heavy wind and rain of last weekend’s tornado led to the collapse of the roof at Hope’s Grove High School.

When the school’s principal and the county’s superintendent got word of what happened, both were in disbelief.

“I was shocked. My mind refused to process what I saw,” Principal Marla Bishop said.

“Hope’s Grove definitely suffered the brunt of the blow. All we’re hearing about from any of the other schools is lots of minor leaks,” Calumet County School Superintendent and School Board President, Derek Nickelson said.

More than a dozen Calumet County schools suffered some sort of water damage; however, Hope’s Grove is the only one that won’t be able to be repaired before school begins in two weeks.

A team of experts, including a structural engineer and an architect, scoured the building on Monday morning to try and figure out what caused the roof to collapse. The water inside the building was about five feet at its highest point.

“Some things are already in the works to make accommodations for the upcoming school year,” Nickelson informed The Herald. “The doors of Summit Bluffs High School have been opened to all displaced students so that they can begin school on time with the rest of their peers.”

Despite the enormity of the damage to Hope’s Grove High School, there’s a glaringly obvious bright side.

“We are extremely fortunate that this did not happen while students were in school. Buildings can be rebuilt, lives can’t,” Nickelson added during a press conference in which he dabbed at moist eyes and kept his arm firmly wrapped around his own high-school-aged daughter.

So far the School Board reports an estimated three-month minimum needed to repair Hope’s Grove High School. During which time all Hope’s Grove students will attend Summit Bluffs High School. Repairs are set to begin as soon as possible. No word yet on how much it will cost.

I’
d always heard that your entire life flashes before your eyes right before you die. Now, I can honestly say that it’s true. Well, almost true. It’s more like your mind flips through a mental photo album of all the things you’d done and the people you’d met—a birthday party, the first time you drove, someone’s face when you told them they’d never be as pretty as you, your mother’s reprimanding glare when you didn’t win the pageant title you were supposed to, you as a little girl waiting on the front steps for your father to come home—it’s all there. The good, the bad, the ugly. All of it.

You can try to focus on the good—like the face of the person you loved—but it’s no use. Whether you want to or not, you see it all. It must be God’s way of letting you see what he saw so you aren’t surprised when you end up on the other side in Hell. Which is exactly where I’d assumed I’d just booked a first class ticket too.

I was too weak to fight it—to argue that I was in fact a good person—once the storm decided that I was going to be one of its victims, there was nothing I could do but try to hold on to the face of the one person I was sure I’d never see again.

Served me right. I shouldn’t have waited to tell him how I felt. I should have told him the moment I felt it. The moment I realized that despite what I’d done in my past, I was a better person just for loving him.

As the darkness and quiet started to surround me, I knew that it was too late to beg for forgiveness now. Instead, I just closed my eyes and prayed for mercy.

T
he creaking boards of the rickety old barn she’d sought cover in were starting to worry her. It seemed like a good idea when she’d pulled her SUV inside, but as the lightning flashed across the sky and a strong gust of wind nearly ripped the top off of it, she was having second thoughts. Looking out across the property, she noticed a saving grace peaking out of the weeds—an old root cellar. She wasn’t sure what to do. She’d always been told to seek cover underground in the event of a tornado and that event was happening now. The roar that had seemed to be off in the distance was closing in at a rapid pace.

The flimsy flip-flops she was wearing stuck in the mud as she stepped out of the barn, slipping from her feet with her next steps. The white linen dress she’d picked out for the party quickly became a clingy hindrance as she tried to run. Her heart raced as she darted across the wet grass, the harsh rain stinging her skin. Like every drop was a sharp razor blade. She reached out for the rusty handle of the root cellar door and pulled with everything she had—which wasn’t much—and dug her now bare feet into the ground trying to get some leverage. Even soaking wet, she only had about a hundred and five pounds to work with. When her mother was constantly reminding her to keep herself thin for pageants, she obviously hadn’t thought about what would happen to Cami if she found herself in a situation where a little muscle—a little meat on her bones—would have come in handy.

“Come on!” she screamed, barely able to hear herself over what sounded like a fleet of helicopters descending on her. The darkness made it that much harder to see what she was doing. Her eyes cloudy with a mix of mud, rain and tears. Tears that she was crying not only because she was scared, but because she was so damn mad at herself for being in this situation. If only she would have told Kyle how she’d felt sooner. The two of them could have been huddled up together in the safety of her house instead of her alone out on some back country road on a run-down property.

She shouldn’t have let herself think that they couldn’t make it. It really didn’t matter where he went to school or what he did for a living. She loved him and that was more than enough. She cursed out loud at her frustrations and at the fact that she couldn’t budge the door standing between her and safety. If she wanted to see Kyle again and tell him that she was sorry, she was going to have to man up.

Each muscle in her arm felt like it was ripping apart as she struggled to hang on to the door as an unseen monster approached. Not just a monster—a tornado. A big one. Like, the biggest one Calumet County had ever seen. Pulling against the wind, she finally managed to get the door up just enough to squeeze her small frame into the cellar, but it was too late. The monster was there and it was out for blood.

Darkness surrounded her as she felt her legs fall from beneath her. The thunder pounding so loudly that she could feel it vibrate her entire body. Crouching in the dark, she closed her eyes and prayed for something—anyone—to save her.

“I got you,” she heard Kyle’s voice call out and felt his warmth wrap around her.

He came for me. He must have gotten my message
.

“Kyle, I—” she started to say, trying to find his face in the pitch black.

“Hold on, Belle,” he whispered in her ear. “You’re going to be okay. I love you too much to let anything happen to you.”

So she did. She held on to him and waited for the storm to be over.

T
he muffled voices she heard seemed familiar, but her eyes refused to open. Her throat was tight as she tried to swallow, causing her body to jerk and sending shock waves of pain through her body. Forcing her eyes to open didn’t help. As she squinted against the harsh light in the room, she tried to make out the faces of the people who had been talking—her parents.