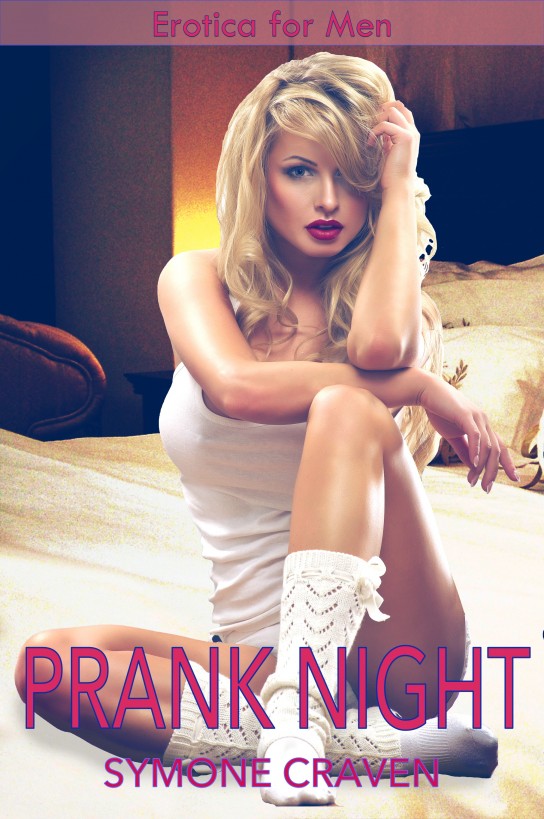 All
characters appearing in this work are fictitious.

Any resemblance to real
persons, living or dead, is purely coincidental.

This book contains explicit
sexual scenes and is meant to entertain adults over the age of 18.
All sexually active characters in this book are 18 years of age or
older. Themes in this book may be offensive to some readers. Please
store somewhere safe that is inaccessible to minors.

All rights reserved. This
story is published subject to the condition that it shall not be
reproduced or retransmitted in whole or in part, in any manner,
without the written consent of the copyright holder, and any
infringement of this is a violation of copyright law. Contact
information for requests for permission to reproduce or distribute
materials available through this course are listed
below:

If You Liked This
Story…

One Night With
The Devil: My Mother’s Dubious Deed

Tonight is it. This is the big night for Lonnie, if he’d only
get his head out of his ass.

He strolls over to his
favorite lunch table, where his best friends Bobby and Nick hang
out every week. Lonnie bites his apple while his buddies look up at
him and sneer. He’s the kind of guy meant for the cool kids table,
way on the other side of the cafeteria. Neither Bobby nor Nick
knows why Lonnie puts up with them. He has long brown hair and
plays the guitar, for Christ’s sake! Girls eat that shit up! Nick
and Bobby? They spend their Friday nights on separate computers in
the same computer lounge playing World of Warcraft. Neither of them
have the lean body or charisma that Lonnie possess.

“
There are three floors,”
Nick says. “Ten rooms each means we got to get all thirty.” He
points to a row of boxes. “These are all the rooms. If we don’t get
‘em all, that’s okay. But we need to get enough to win this
year.”

Dennis looks at him,
confused. He wrinkles his freckled nose and scratches his ginger
hair. “What are we gettin’?” He asks.

Nick and Bobby glare at one
another. “I thought you told him,” Bobby says.

“
I thought you,” Nick
replies.

Finally, the two of them
awkwardly smile at Dennis and both answer in unison:
“Panties.”

“
We’re borrowing them,”
Bobby adds. “Each year we collect them and make our
trademark.”

“
We need a trademark in
order for our prank to count,” Nick says. “Otherwise, it’ll be bad
news for us.”

Bobby shrugs. “You
basically get your ass kicked by the Reagan brothers.”

“
Who are the Reagan
brothers?” Dennis asks.

Both of the young boys
groan. “Jeez, where are you from that you don’t know who they are?
It’s those two over there.” Nick points to a gregarious couple of
young men leaning against the quad statue of Seymour Crest, founder
of the Burrows Boarding School. There are several other teens
chatting around them. Amidst the vast battlefield of the outdoor
cafeteria, it is clear to see that the two of them wield the most
power. “Mitch and Kenny,” Nick says. “That tall one with the dirty
blonde hair is Mitch. And, well, the smaller muscular guy next to
him is Kenny.”

Dennis smiles. “Cool. So
then you guys are pretty good at this, huh?”

The two of them shake their
heads. “Not at all,” Nick replies. “We’ve had a losing streak since
we started three years ago. And we have Lonnie James-Osmet to thank
for that.”

“
Who is Lonnie
James-Osmet?” Dennis asks, his voice phlegmy and shrill. When he
speaks, he slides his coke-bottled glasses up his nose.

Both of the young men nod
to Lonnie, whose headed in their direction.

Dennis snickers. “That guy
is like a model from one of those JC Penny’s catalogues,” he says.
“Why does he hang out with you two?”

Bobby and Nick both look
insulted at first. But when they take one look at each other they
relax and shrug. “We’re still trying to figure out why,” Bobby
says. “All I know is that he chickens out of the panty raid every
year.”

“
Which means that every
year we get our asses kicked.” Nick wipes his nose, thinking of the
numerous times he’s had to go to the school infirmary. Bobby could
no longer count how many wedgies he’s received during this school
year alone. He has the permanent burn running down his ass crack to
prove it.

Lonnie, however, appears to
come out harmless every time. And Dennis can see why. The guy
approaches him, sticks out his hand and says, “I don’t think I’ve
ever seen you before. I’m Lonnie James-Osmet.”

As Lonnie extends his hand,
Dennis cowers and nearly falls off his seat. He takes a deep
breath. “Dennis Burbur,” he replies. “Your friends were telling me
about you.”

Lonnie pats Bobby and Nick
on the back. “Hopefully all good things,” he says.

That’s when Bobby stands up
from the table. “Dennis, will you excuse us?” He nudges Nick in the
arm, who suddenly shoots up from the table also. “We’re gonna take
a quick lap around the cafeteria. Be back in 5.” Then the two of
them scurry away with Lonnie in tow.

When they’ve reached a good
distance from Dennis, they begin to slow their stride. “Where were
you guys this morning?” Lonnie asks. “I thought we were all going
to blow off first period and get high in the park.”

Nick just shrugs and
mutters ditto. “Look, Lonnie. Bobby and I have been thinking long
and hard. And we think that it’s not such a good idea for all of us
to be hanging out right now.”

Lonnie shakes his head. “No
I don’t,” he answers. Bobby and Nick are surprised to see Lonnie so
distraught. “I thought we were friends.”

“
Don’t get us wrong” Bobby
replies. “We like being your friend.”

Then, Bobby regains
Lonnie’s attention. “But, the thing is this: You’re not a big fan
of prank night. You don’t want to be a part of it. And we get
that.”

“
But,” Bobby says, pointing
to himself and Nick. “We have to do it so we don’t get pummeled by
the Reagan brothers.”

“
Hold on,” Lonnie replies.
“This is all because of them? You should stand up to those two
jerks. The only reason they pick fights with everyone is because
they’re so insecure.”

“
Right,” Nick says. “The
two of them definitely have some major character flaws. Regardless,
our asses get kicked every year.”

Lonnie smiles. “Thanks, but
I think you’re cool guys too. That’s why I hang out with
you.”

Bobby and Nick give Lonnie
a piteous look. They truly like him, and not just for the benefits
of being his friend, which means free marijuana, a swim in his
pool, a chance to play basketball on his own private court. Lonnie
is genuinely one of the good ones. Bobby furrows his sad eyebrows
at first, reconsidering his decision. But, then Nick coughs
abruptly, bringing Bobby back to reality. He shakes himself
out of it. “This is hard to do,” Bobby says. “But, hey, let’s just
wait until prank night is over. Then we’ll talk.”

They leave him there
without even saying good-bye. Across the quad he sees the Reagan
brothers laughing and having a good time. He storms over to them
and catches Mitch’s eye. Mitch grins and jabs his baby brother in
the rib. Kenny grunts at first and gives Mitch a threatening stare.
Then, he notices Lonnie and the same sneer appears on his face
also.

“
We were beginning to think
you were too good for us.” Kenny cracks his knuckles. “What brings
you over to our side of the quad?”

Lonnie takes a deep breath.
He knows he can lose his patience easily; it’s one of the reasons
why he doesn’t cross paths with the Reagan brothers. “About this
prank night,” he says. “Can we just drop it?”

The Reagan brothers glance
at one another, confused. “‘Drop it?’” Kenny asks.

Lonnie nods. “It’s kind of
stupid, don’t you think? You end up embarrassing and upsetting
almost half of the student body.”

Mitch shrugs. “They either
have a sense of humor or they don’t.”

“
You know,” Kenny says. “If
you participate and get into the spirit of it, then you’ll be
surprised at just how much fun it can be.”

“
And what about the girls
over at Chestnut Hall?” Lonnie asks. “Do you think they like having
their panties thrown on the tree outside of their
dorms?”

Both Kenny and Mitch
snicker. “It’s not like we’re the ones who do it,” Kenny says.
Then, he points to Nick and Bobby. “It’s your bosom buddies over
there that you have to blame.”

Mitch playfully scratches
his head. “Wait a second… Did you and your girlfriends over there
get into a fight?” Both of the brothers begin to mock Lonnie,
bursting into fake tears.

But Lonnie isn’t easily
intimidated. “If you two weren’t such dickheads,” Lonnie says.
“Then maybe it would be less tense around here.”

Mitch stalks towards him
until they’re standing toe-to-toe. “And what are you going to do
about it?” He asks, breathing heavy into Lonnie’s face. He stands
several inches taller than Lonnie, and has a meaty build fit for a
school thug.

Lonnie doesn’t flinch. He’s
calm to the point that it makes Mitch anxious. “I don’t think I’m
asking for much,” Lonnie says. “I’m just saying to call this stupid
crap off.”

By then, the boys haven’t
noticed that they’ve drawn a crowd. Everyone in the quad gathers
around the three young men, whispering about what’s going to happen
next. Even Bobby, Nick, and Dennis try to push their way to the
front. They stand on their tip toes, barely catching a glimpse of
Lonnie and Mitch about to fight. Meanwhile, Kenny stands in the
wings, anticipating his tap into the ring. Eventually, someone
yells for the two to fight. Soon the entire quad is chanting
it.