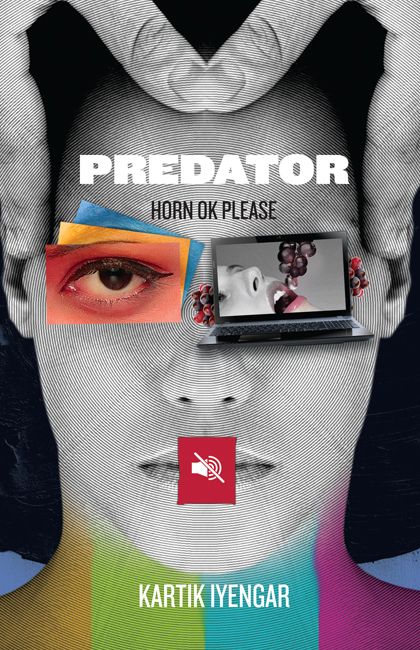 This book is dedicated to you, dear reader.
Stay safe online and offline.

About Chief Redbull, the author:
Like Doc Jekyll, I do a day-job, while my alter ego, Hopper Hyde, kicks his heels waiting for the day to get over. On your bike, Batman! I can sense I’m mutating into a power-point Picasso – collaging images that I dream up cat-napping through the boring conference calls. As a roadie and a writer, I can just about tell the difference between conjunctions and railway junctions, verbs and kerbs.
Pen-in-Sula
is my desk which holds my research books, laptops, roadmaps and bottles of red wine. As a merchant of humour, I’m neither RJ nor VJ, but a writer with an attitude, who intends to churn out one ‘blook’ (best-loo-book) a year to the day I die. That makes me … er … a BJ? A blook jockey. They call me Chief Redbull.

About Goose Goldsmith, photographer and professional lecher:
A bizarre amalgam of the eye behind the camera lens, a new-age explorer and an all-round weirdo, that’s me, although I would perhaps introduce myself as a photographer, and leave you to figure out the rest. I wouldn’t say I have a great ear for music, but I listen to a lot of it and am rather partial to House Music and Classic Rock, sometimes Tiesto when I’m ill. I’m compiling a coffee table book with the help of my latest acquisition, the nonpareil Nikon D5000. An ancillary project is the ongoing virtual reality show on Facebook, while I scout around for my perfect life-partner. This keeps me real busy … too busy to tend to mundane routines so I end up sporting a dreadful stubble. My pictures depict India 2.0 and the spirit of our great nation. I think cockroaches are cool. I love my friends. I aim to please. I see you smiling, so say cheese!

About Derek Demonia, the ‘Thing’:
Contradictions with a capital ‘C’, c’est moi. I am a muscle-bound troglodyte, bashful, adventurous, aggressive, fun-loving and, yes, a road-hog, living several aimless lives to the fullest. Have I mentioned I’m schizophrenic? I joined the trip in a fit of exuberance, and to help Chief and Goose live out their fantasies. As a team we represent Generations X, Y and Z. My multiple personalities stand guard over Goose, Hound and Chief as they do the full monty to define the wild side of India 2.0. I love my friends.

About Hound Hitchhiker:
I’m AFU (All Forked Up). My life spiralled out of control a long time ago when I left India and chose to settle down in the UK. Now I find myself caught up in the vicious circle of events that revolves around two women – my love and my muse – and keep alternating between reality and delusion. And no, I’ve not yet written any books about interstellar galactic travel, but if you’ve not got anything better to do, watch this space, you never know.

About Motormouth:
The talking SUV – A jeep with superpowers; she has a mind of her own and drives the roadies crazy with her antics. Everybody loves her.

Looking for love, haven’t you – everywhere?

Daddy’s gonna tie you up in an electric chair;

Should the bruises hurt & the cuts make you bleed
,

Blame yourself for the warnings you just didn’t heed;

Save those tears for they make me smile
,

Getting back online may take you quite a while;

Standing there naked with your hands tied in a cuff;

I’ll carve up your face with a sharp razor blade
,

Your tears & blood are like the sun and shade;

If you die easy, I’ll let the angels sigh
,

You shall know more pain, don’t you dare say goodbye;

My little plaything, how I love to see you in pain;

The flowers have withered, the violets crushed in these hands of mine
,

Daddy’s silly little girl, you should never have come online!’

Grace tried to open her eyes but her eyelids were stuck together with the nearly dry blood. Realization dawned upon her that this wasn’t just a nightmare. She tried lifting her hands to rub her eyes but the effort was too great. Clang! There were chains around her wrists, the dull pain in her left shoulder hurt, she could only lift her right hand; her left hand was broken.

She tried to scream but all she could manage was a whimper. Where was she? Her blood froze when she discovered she was gagged. She tugged down the rag tied around her mouth and coughed as she spat out the cloth that had been stuffed into her mouth. Instinctively, she tried to get up, but she couldn’t. Her feet were bound. What was it, shackles?

She mustered all her strength to drag herself up to lean against the wall. Her back encountered a cold, uneven wall behind her. She lifted her right hand and rubbed her eyes with her arm. She opened her eyes to an empty darkness and an abysmal silence. Where was she?

She tried to recollect what had happened but her mind refused to respond as the excruciating physical pain overrode everything else. Even her body spurned the request as it ached all over. Disoriented and terrified, she struggled to stay upright. She couldn’t. Her legs felt like jelly and there was blood all over her lower abdomen. She felt weak and her head hurt. She’d been drugged, but by whom?

Suddenly memory crashed back in horrific detail and she stared into the darkness in terror. She cringed as she frantically tried to put the pieces together. She knew how it happened. She had a faint recollection of feeling extremely sleepy after she’d had a few sips of the Shiraz Cabernet that he had handed her. It had to be the wine!

She’d seen the world around her swim before she had passed out. She had no idea of what happened until she had woken up naked, gagged and bound in a dark, dingy den. It had been close to a week in captivity. And they were merciless.

She sobbed silently as tears streamed down her cheeks and mingled with the dried blood on her face. And then she knew. She remembered meeting this extremely charming man with whom she fell in love at first sight.

The evening had been perfect with her rushing around, getting ready for the college reunion. He had stopped by her house and offered to drop her at the party. It was then that he had offered her a glass of red wine. Although it had seemed quite innocuous, her instinct had told her that something was not quite right. One sip of the wine and she had blacked out. She should have trusted her sixth sense.

She knew it was too late when she saw those dark, ugly figures looming around her, their hands groping, touching and feeling her all over. She had been too numb to react. The macabre paint on their faces made them seem inhuman. They were beasts. They had no soul.

They were tearing away at her clothes in a frenzy. She had tried feebly to push them away. She could not. Those fists had rained merciless blows on her face, chest and abdomen until she bled. She had heard her rib cage crack and she’d howled in agony. They had laughed like hyenas.

And when one of the painted faces forcibly tried to enter her, she somehow managed to free one hand. She grabbed his face, and tried to gouge out his eyes. She twisted to try and bite the forearm that had a stranglehold on her neck. As he pulled away, she saw she had smudged the greasepaint on his face. She was shocked when she recognized the face beneath the maquillage.

A terrible ache was tearing away her insides. She had been savagely gang raped by the brutes. The wine, laced with a powerful sedative had made her extremely drowsy, and slowed her reflexes. She’d watched helplessly as they took turns in raping her, over and over again.