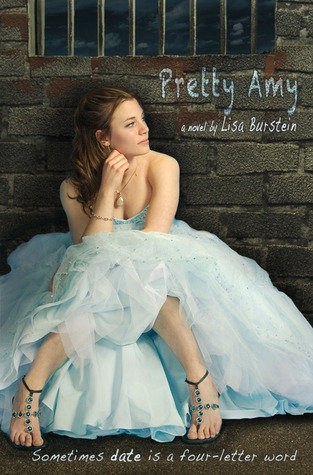 Copyright © 2012 by Lisa Burstein. All rights reserved, including the right to reproduce, distribute, or transmit in any form or by any means. For information regarding subsidiary rights, please contact the Publisher.

(who are nothing like the ones who appear in this book)

Unfortunately, I am only myself. I am only Amy Fleishman.

I am one of the legions of middle-class white girls who search malls for jeans that make them look thinner, who search drugstores for makeup to wear as a second skin, who are as sexy and exotic as blueberry muffins.

I am a walking, talking
True Life
episode. Your high-school guidance counselor’s wet dream, and one of the only girls I know to get arrested on prom night.

When my mother dropped me off at Lila’s, rather than running like hell the way I usually did, I sat next to her in our minivan and waited for a speech.
The speech mothers give to their only daughters on nights when those daughters are all dressed up and the mothers look all wistful and teary.

I assumed she was building up to it, was working through exactly what she was going to say so it would be perfect. I knew from TV that she must have practiced in the mirror, but maybe, faced with having to say all those things to me, she’d frozen up. I could understand that.

When I saw Lila peek out to see who was sitting in her driveway, and then felt my phone vibrate with a text that I knew must say,
WTF R U DOIN?
, I figured I had waited long enough.

“So this is it…,” I said. My mother stared at Lila’s small, birdshit-gray house and bit at what was left of her nails. After I’d started hanging out with Lila and Cassie, my mother gnawed at her nails the way a baby sucked her thumb. “…my senior prom,” I continued.

Maybe she was overwhelmed. Her little girl was all grown up. Her ugly duckling had finally become a swan.

“I don’t want to ruin this for you, so I’m choosing to hold my tongue.”

My mother loved using old-time folksy sayings.
Hold your horses. The early bird catches the worm. The penis with two holes puts out the fire faster.

All right, fine, I made up that last one.

She had been holding her tongue for a while now. When yelling at me about my “degenerate” friends hadn’t helped, she went for the semisilent treatment.

Stupid me for trying to get her to talk.

“There’s something very wrong with this, Amy,” she said.

“I want to tell you to have a good time, to enjoy every moment, to be safe, but I know you won’t listen anyway. I know you’ll do what
you
want to do.”

She was talking to herself again.

My mother’s favorite hobbies were talking to herself and bitching. Though I suppose those were hobbies for most mothers, my mother honed them like skills. If bitching were karate, my mother would be a black belt.

I looked down at my dress. It was strapless and light blue to bring out my eyes, which weren’t blue, but raccoon gray, and picked up whatever color I put next to them. The bodice was tight and shiny, like what a superhero might wear, and the skirt flared out and fell just below my knees. When my mother had seen it hanging on the bathroom door earlier tonight, she’d said it looked trampy,
which made me even happier that she hadn’t been there when I picked it out.

“Thanks for the memories,” I said, opening the door.

Her only job tonight was to tell me I was beautiful, that I was her beautiful baby girl all grown up, but she couldn’t even do that.

“I can’t help the way I feel,” she said, like some self-help-book junkie. Well, not
like
one—she
was
one. For Chanukah last year she had gotten me an itchy sweater and
Chicken Soup for the Daughter’s Soul
. The inscription had read,
FYI
.

I found Lila sitting at her vanity, playing with her hair. She was wearing a lilac dress and smelled of lilac perfume, like some flower-variety Strawberry Shortcake doll
.
Her vanity was really just an extra chair from the kitchen and a small desk with a mirror propped up on it, but nonetheless the effect was the same.

Lila saw me walk in but stayed seated. This was what she did; she liked to force you to watch her for a moment, to drink her in. And since I knew this, I hung in the doorway and waited while she put on mascara.

As lame is it sounds, Lila was the kind of person who danced through life on her tiptoes, a ballerina with woodland animals holding up the train of her dress. And, as much as I hated to admit it, I was one of those woodland animals.

“What were you doing out there?” she asked without turning around. This was another game she liked to play—she was busy and you were interrupting her.

“The usual. Ruining my life and ruining my mother’s in the process.”

She swept a blush brush over her cheeks. She hadn’t dipped it in anything, so I wasn’t sure if this was also part of her act or if it was some beauty secret I was unaware of.

“What do you think?” she asked, standing with her hands on the skirt of her dress, then twirling around slowly so I could see her from every possible angle.

It was okay. I knew it was my payment for hanging out with her.

Besides, I can’t really say anything about needing constant reassurance. Just because I don’t get it from Lila doesn’t mean I don’t need it. I’d taught my parrot, AJ, to say
Pretty Amy
,
among other things
.
And when I’d asked him how I looked that night, he’d obliged as usual.

“You really mean it?” Lila asked.

“I love your dress,” I said, just like I was supposed to. I guess when it came to Lila I was just like AJ, repeating meaningless phrases.

“You need more eye shadow.” She pushed me down into her seat. Once she got going it was hard to stop her, and before I knew it, she had redone my whole face.

Rather than the soft, natural effect I’d had when I arrived, after Lila was done I looked like I was ready to go up onstage. Not the way people onstage look when they’re actually onstage, but the way they look when you see them close up before or afterward.

“Much better,” she said, stepping back to appraise her work. I knew how I wanted to respond, but instead, I responded how I usually did when it came to something I didn’t agree with. I said nothing.

I wondered if she had done this on purpose, like some bride/bridesmaid thing. Lila did act like a bride at a wedding that never ended. She always had to be the most beautiful, the most interesting, and in this case, the least likely to be mistaken for a blind prostitute.

“Wow,” we both said. Well, really I said it, but I could see Lila’s mouth open to make a word and stop in a perfect
O
. I’d never seen Cassie in anything other than an oversize flannel shirt and cargo pants. She usually dressed like a lumberjack—it might have been part of the reason Lila put up with her.

That night, it was obvious that Cassie was far too attractive to be as crabby as she was. Maybe that was why she always tried so hard to hide it.