Read Pride and Prejudice and Zombies: Dawn of the Dreadfuls Online

Pride and Prejudice and Zombies: Dawn of the Dreadfuls 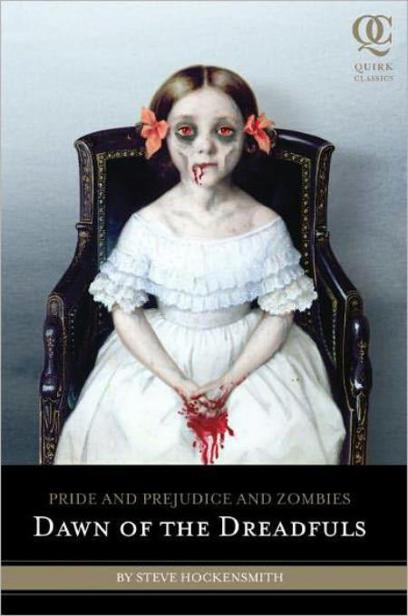 PRIDE AND PREJUDICE AND ZOMBIES

By Jane Austen and Seth Grahame-Smith

“A delectable literary mash-up . . . might we hope for a sequel?
Grade A-.”
—Lisa Schwarzbaum of
Entertainment Weekly

“Jane Austen isn’t for everyone. Neither are zombies. But combine the two and the only question is, Why didn’t anyone think of this before? The judicious addition of flesh-eating undead to this otherwise faithful reworking is just what Austen’s gem needed.”
—
Wired

“Has there ever been a work of literature that couldn’t be improved by adding zombies?”
—Lev Grossman,
Time

“Such is the accomplishment of
Pride And Prejudice And Zombies
that after reveling in its timeless intrigue, it’s difficult to remember how Austen’s novel got along without the undead. What begins as a gimmick ends with renewed appreciation of the indomitable appeal of Austen’s language, characters, and situations. Grade A.”
—
The Onion A.V. Club

D
AWN OF THE
D
READFULS

All rights reserved. No part of this book may be reproduced in any form without written permission from the publisher.

For Jane.
We kid because we love
.

WALKING OUT in the middle of a funeral would be, of course, bad form. So attempting to walk out on one’s own was beyond the pale.

When the service began, Mr. Ford was as well behaved as any corpse could be expected to be. In fact, he lay stretched out on the bier looking almost as stiff and expressionless in death as he had in life, and Oscar Bennet, gazing upon his not-so-dearly departed neighbor, could but think to himself,
You lucky sod
.

It was Mr. Bennet who longed to escape the church then, and the black oblivion of death seemed infinitely preferable to the torments he was suffering. At the pulpit, the Reverend Mr. Cummings was reading (and reading and reading and reading) from the
Book of Common Prayer
with all the verve and passion of a man mumbling in his sleep, while the pews were filled with statues—the good people of Meryton, Hertfordshire, competing to see who could remain motionless the longest while wearing the most somber look of solemnity.

This contest had long since been forfeited by one party in particular: Mr. Bennet’s. Mrs. Bennet couldn’t resist sharing her (insufficiently) whispered appraisal of the casket’s handles and plaque. (“Brass? For shame! Why, Mrs. Morrison had gold last week, and her people don’t have two guineas to rub together.”) Lydia and Kitty, the youngest of the Bennets’ five daughters, were ever erupting into titters for reasons known only to themselves. Meanwhile, the middle daughter, fourteen-year-old Mary, insisted on loudly shushing her giggling sisters no matter how many times
her reproaches were ignored, for she considered herself second only to the Reverend Mr. Cummings—and perhaps Christ Himself—as Meryton’s foremost arbiter of virtue.

At least the Bennets’ eldest, Jane, was as serene and sweet countenanced as ever, even if her dress was a trifle heavy on décolletage for a funeral. (“Display, my dear, display!” Mrs. Bennet had harped at her that morning. “Lord Lumpley might be there!”) And, of course, Mr. Bennet knew he need fear no embarrassment from Elizabeth, second to Jane in age and beauty but first in spirit and wit. He leaned forward to look down the pew at her, his favorite—and found her gaping at the front of the church, a look of horror on her face.

Mr. Bennet followed her line of sight. What he saw was a luxury, hard won and now so easily taken for granted: a man about to be buried with his head still on his shoulders.

That head, though—wasn’t there more of a loll to the left to it now? Weren’t the lips drawn more taut, and the eyelids less so? In fact, weren’t those eyes even now beginning to—

Yes. Yes, they were.

Mr. Bennet felt an icy cold inside him where there should have been fire, and his tingling fingers fumbled for the hilt of a sword that wasn’t there.

Mr. Ford sat up and opened his eyes.

The first person to leap into action was Mrs. Bennet. Unfortunately, the action she leapt to was shrieking loud enough to wake the dead (presuming any in the vicinity were still sleeping) and wrapping herself around her husband with force sufficient to snap a man with less backbone in two.

“Get a hold of yourself, woman!” Mr. Bennet said.

She merely maintained her hold on
him
, though, her redoubled howls sparking Kitty and Lydia to similar hysterics.

At the front of the church, Mrs. Ford staggered to her feet and started toward the bier.

“I think not, Madam!” Mr. Bennet called out (while placing a firm hand over his wife’s mouth). “If someone would restrain the lady, please!”

Most of the congregation was busy screeching or fleeing or both at once, yet a few hardy souls managed to grab Mrs. Ford before she could shower her newly returned husband with kisses.

He spent the next moments trying to disentangle himself from his wife’s clutches. When he found he couldn’t, he simply stepped sideways into the aisle, dragging her with him.

“I will be walking that way, Mrs. Bennet.” He jerked his head at Mr. Ford, who was struggling to haul himself out of his casket. “If you choose to join me, so be it.”

Mrs. Bennet let go and, after carefully checking to make sure Jane was still behind her, swooned backward into her eldest daughter’s arms.

He turned his attention then to the next two girls down the pew: Elizabeth and Mary. The latter was deep in conversation with her younger sisters.

“The dreadfuls have returned!” Kitty screamed.

“Calm yourself, sister,” Mary said, her voice dead. She was either keeping a cool head or had retreated into catatonia, it was hard to tell which. “We should not be hasty in our judgments.”

Halloween Is For Lovers by Nate Gubin
Who Murdered Garson Talmadge by Bishop, David
Personal Touch by Caroline B. Cooney
Gold, Frankincense and Dust by Valerio Varesi
Serendipity and Me (9781101602805) by Roth, Judith
JoAnn Wendt by Beyond the Dawn
The Complete 2012 User's Guide to the Amazing Amazon Kindle: Covers All Current Kindles Including the Kindle Fire, Kindle Touch, Kindle Keyboard, and Kindle by Grubbs, Bruce, Windwalker, Stephen
The Empty Family by Colm Tóibín
The Whispering Hollows by Lisa Unger
Divergent Trilogy 01.1 FREE FOUR: Tobias tells the story by Veronica Roth