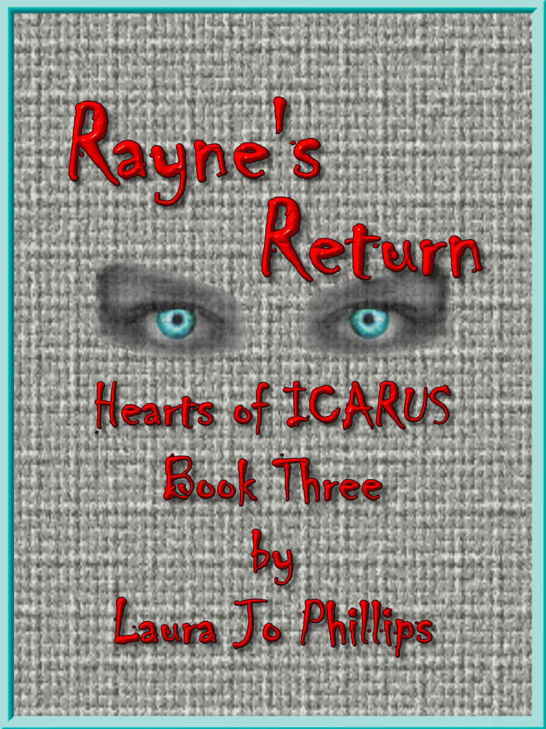 The Hearts of ICARUS Book Three

For my family.  This has been a long year of sadness and loss for us all.  As this year closes it’s getting a bit easier to look back with more joy than loss.  Day by day we heal, as is right.  Those we’ve loved and lost will forever have a place in our hearts, and thus live on through us, never to be forgotten.

For Mom.  My best friend, biggest fan, constant supporter, and the best listener ever, not to mention the best Mom anyone could ever ask for.

I love all of you, and appreciate each of you every single day.

Look for previews and coming release announcements at:

Other Books by Laura Jo Phillips

Book One of the Soul-Linked Saga

Book Two of the Soul-Linked Saga

Book Three of the Soul-Linked Saga

Book Four of the Soul-Linked Saga

Book Five of the Soul-Linked Saga

Book Six of the Soul-Linked Saga

Book Seven of the Soul-Linked Saga

Book Eight of the Soul-Linked Saga

Quest for the Moon Orb

The Orbs of Rathira, Book One

Quest for the Sun Orb

The Orbs of Rathira, Book Two

Quest for the Heart Orb

The Orbs of Rathira, Book Three

(Available under the name Kathleen Honsinger)

Hearts of ICARUS, Book One

Salene’s Story
(Not yet titled)

To Honor You Call Us

Man of War, Book One

For Honor We Stand

Visit the home of the Soul-Linked Saga online at:

or email Laura Jo at:

Rayne Dracon sat on a large boulder at the edge of the mesa above the caves where the Khun still made their homes, watching the festivities below.  Tani and Steel’s wedding ceremony had been beautiful in its simplicity, but the celebration afterward had been long and, for Rayne, exhausting.  She was never comfortable in large crowds, particularly when a large number of the guests were people she didn’t know.  She’d kept her partial shield up for hours in order to hide her true emotions from her family, and her full shield up for the past hour so she could sit on the mesa alone, and in peace.

A day after the
Ugaztun
reached Garza with the Dracons, Nica’s ICARUS vessel,
Nica’s Legacy
, had arrived.  The day after that had seen the arrival of the Bearen-Hirus’
Armadura
, the Katre’s
Vyand
, the Falcoran’s
Eyrie
, the Gryphon’s
Razor
, and the Tigren’s
Triskele
.  Tani had been truly shocked by the number of Clan Jasani who’d come rushing to aid her the moment they’d learned she was in trouble, and that had saddened Rayne.  She’d never understood just how much of an outsider her youngest sister had felt, especially after learning she wasn’t a
berezi
.

So many changes had taken place on Garza in the past few weeks.  The first time Rayne stepped foot on the planet it had been a dry, dead world.  Now, it was beautiful, and growing more beautiful by the day.  A river teeming with fish ran through the grassy valley below, and the mountain behind her was covered with thin saplings that would one day grow into a rich, green forest.  Brightly colored birds filled the skies during the day, and the sunsets were always breathtaking.

She watched as Tani and Steel shifted into their enormous alter-forms; the deep red dragon Queen, and the glossy black dragon King of the Khun.  They leapt into the sky side by side, and tears pricked her eyes as she thought of the happiness that now lit her youngest sister’s face.  When they were gone, Rayne looked around for Salene.  After a few moments she found her standing in the valley with her Gryphons around her.  In a couple of weeks, after everyone returned to Jasan, there would be a mating ceremony for them.

Rayne was as happy for Salene as she was for Tani, but at the same time, she couldn’t help wondering who her own male-set was, or where they were, or why they hadn’t found her.  She wasn’t jealous of her sisters’ happiness, but she very much wanted some of that happiness for herself.  Of the three of them, she was the one who’d dreamt of finding her Rami and having a family above all things.  How ironic that she would be the last to fulfill that dream.  Maybe she really would put in for a spot at Arima House when they got back home.

She took a deep breath and started to sigh, then swallowed it when she heard footsteps approaching from the cliff face.  Not wanting to answer questions about why she was there alone, she checked the psychic shield that prevented people and electronic devices from noticing her.  It didn’t truly make her invisible, but it might as well have.  When raised fully not even her sisters or her parents could sense her presence by scent or sight, but it didn’t work with sound, so she had to be very quiet.

She had to bite back a startled gasp when the Bearen-Hirus arrived on the mesa.  They weren’t quite as tall as some of the other Clans, but at six and a half feet they still towered over her.  They had massive shoulders, arms and necks.  Even their faces looked strong with well-defined cheekbones, boldly curved noses, and high foreheads that rose almost straight up over remarkably beautiful eyes.  Landor’s were violet, Con’s were jade green, and Ari’s were amber.  Their hair was not as long as most Clan Jasani preferred, hanging just past their shoulders in a thick, shining black fall, though Con’s, she noticed, was pulled back in a low ponytail.

As Rayne took in the details of their appearance, she couldn’t help but wonder when they’d become so devastatingly hot to look at.  She thought back, surprised to realize that she hadn’t actually seen them for years.  How odd.  As a child she’d thought of them as almost-uncles, like Jackson, Clark, and Rob Bearen, though she’d seen them rarely and had never known them very well.  Landor, Condor, and Aridor had once been heads of security for the Jasani spaceport, but now they worked for ICARUS.  She remembered that they used to make a point of greeting the Dracon girls whenever they passed through the skyport on their way to or from school, but the last time she could remember seeing them was when she was in her early teens.  Thirteen or fourteen, she thought.

“Where could she have gone?” Landor asked with an edge of frustration in his voice.

“I don’t know,” Ari replied, impatiently pushing a lock of hair off of his forehead.  “We’ve checked every cave for her scent, as well as the entire valley.  I even went so far as to ask if she’d transported up to the
Ugaztun
already.”

“How long are we going to play this charade?” Con asked.

“It’s not a charade,” Landor said.  “She sees us as uncles.  We all agreed to wait until she matures, and is able to see us as men.”

“How long will it take for her to mature?”

“That I cannot answer.”

“Do you intend that we wait forever?”

Of course not,” Landor said, absently twisting the heavy gold ring he wore on his left forefinger.  “Just until she grows up.”

“In that case, we’re in for a much longer wait than we expected because as far as I can tell, Rayne Dracon is as much a child now as she was when she was ten,” Con said.

“I know,” Landor conceded with a sigh.  “Let’s return to the valley.  Perhaps she’s down there somewhere and we just missed her.”

Rayne sat motionless on the boulder as the Bearen-Hirus climbed down the cliff face, so shocked she could barely suck air into her lungs.  It wasn’t easy to wrap her mind around the fact that the Bearen-Hirus were meant to be her Rami.  The moment she did accept it, pain followed.
How long had they known?
she wondered.  A long time, from the sound of it.  Probably for as long as it’d been since she’d seen them, which had to be six or seven years.

Murder in the Smokies by Paula Graves
Little White Lies by Aimee Laine
You Will Call Me Drog by Sue Cowing
Warning by Sophie Cunningham
The Gale of the World by Henry Williamson
Murder in Hell's Kitchen by Lee Harris
A Muse for Mishka (Wiccan-Were-Bear #12) by R.E. Butler
The Center Cannot Hold: My Journey Through Madness by Elyn R. Saks
Acquired Motives (Dr. Sylvia Strange Book 2) by Sarah Lovett
Italian Passion by Jayne Castel