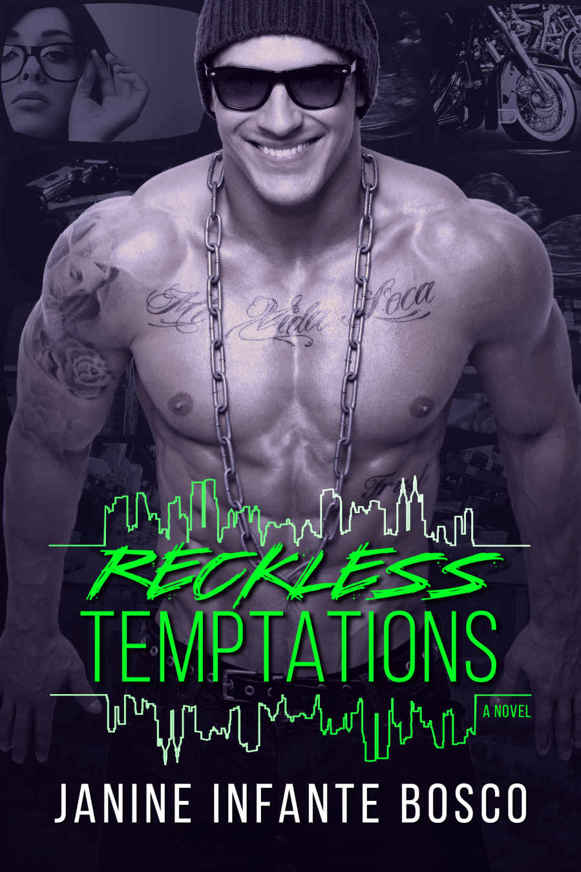 You are about to go on a detour!

Away from the madness of manic depression and Jack Parrish.

A place where the sun is always shining and Riggs is always laughing and making completely inappropriate remarks.

In other words, leave Jack in Uncontrollable and embrace the lighter side of The Tempted Series.

Because shit will get twisted and dark in Lethal Temptations with Blackie’s story.

Be happy for the reprieve.

So, there’s laughter and maybe a happily ever after but as always there will be the following:

A shit ton of motherfucking and other obscenities.

The crass talking bikers are back.

So remember the grammar won’t be on point because you are meant to feel like Riggs and the guys are talking to you. They’re rough around the edges and so are their words.

Do not be offended by the slang and derogatory name calling. It’s for authenticity purposes and while I could’ve changed the words and made things “safe” I felt, safe is for pussys. I assure you I love all things Chinese.

Below are the rules for a drinking game. (Yes, let’s keep on drinking. My mission in life is to get you drunk and frisky when you write a review. Please write a review. Drunk or sober, one line or two, just please do. )

Take one shot whenever someone motherfucks someone.

When you’re good and bombed, write your review!

Which will you choose?

See you on the other side,

Thank you for always being my biggest fan and the person standing in the shadows encouraging me to shine.

Other Book in The Tempted Series

Other Books by Janine

Don’t these bitches know who they’re fucking with and who the fuck I ride with? Pretty ballsy move taking me—or any of the Satan’s Knights for that matter. You would think after that shit went down with Jimmy Gold, people would realize we don’t fucking play around. My club will come for me and when they do these motherfuckers will get down on their knees and tell me they love me. They’ll beg my ass not to slit their throats—but I’ll do it anyway because I’m nobody’s bitch.

I heard a screech, like nails on a chalkboard, but that wasn’t it. I knew that sound, someone needed a can of WD-40 for that garage door. Stupid fucks couldn’t even spring for an electric door—that shit was still on a chain link.

Good, maybe these assholes will take the fucking bag off my head so I can spit in their faces and make them wish their mothers aborted their asses. Fuck that, I’d piss on them. Literally, these fucks took my cut, stripped me of all my clothes and tied my naked ass to a metal chair. I had to take a leak, and I was determined to take aim at one of these fuckers when the time was right.

I would definitely piss on “Jackie fucking Chan.”

The bag was lifted from my head and someone pulled a chain switch on a lightbulb dangling above me, temporarily blinding me as they said a bunch of shit I didn’t understand.

These bastards ruined me. I used to love a good eggroll but after this shit, I’ll never look at another one.

They exchanged more of their shit language before Sun Wu dragged a chair across the concrete floor and sat in front of me.

“Mr. Riggs, we meet again,” Wu crooned, as he crossed a leg over his knee.

I wriggled my arms that were tied behind me, trying to free them so I could grab my dick and aim straight for his mouth, but it was no use.

“Fuck you, Wu,” I sneered, as one of the Red Dragons’ rammed his fist against the side of my face. I wasn’t expecting the blow and bit the inside of my cheek, tasting the metallic flavor of my own blood.

“I expected more from you, something more original than fuck you, since you and your club have already fucked me over,” he pointed out.

I turned my head, stared him in the eyes and swished the blood around in my mouth before spitting it at the
kung fu
warrior, which earned me another fist to my face.

“You have a sharp tongue Mr. Riggs,” Wu said, lifting his head to meet the eyes of one of his men.

“Why don’t we cut the bullshit,” I said, spitting more blood from my mouth. “You got a hard on for me or something?”

“A hard-on,” he scoffed, earning me a glare that could kill.

“Explains why I’m naked as the fucking day I was born. You a faggot or something? I ain’t bending over for you, “Jackie Chan.” Ain’t no fucking way,” I growled.

“
尊重,”
shouted the first asshole who punched me.

“Yeah, whatever the fuck that means! You jerk offs haven’t realized I’m not fluent in your dick language,” I spat, losing my patience with this game of cat and mouse. I turned my eyes back to Wu, “Why the fuck am I here?”

“You will tell me where my drugs are and why I’m burying three of my men and a bunch of whores.” He held out his palm and one of his men handed him a leather whip.

“Sounds like you bitches rang in the Chinese New Year early,” I said, eyeing the fucking whip. “What are you people into? Like it rough, do ya?”

Sun Wu uncrossed his legs and stood, slapping the whip against the palm of his hand and crouched down in front of me.

“Mr. Riggs, I’m giving you a chance to save yourself right now and tell me what happened to my drugs?”

“I don’t know dick about what you’re talking about. If you’re missing some of your drugs maybe you motherfuckers should turn on the news. That crazy mobster, Jimmy Gold, got caught with a shit ton of them. Maybe he’s your guy,” I snarled, cocking my head to the side. “Sucks for you though, that mofo is sitting cozy in the burn unit at Lutheran Medical. I heard his dick got singed off, maybe you can lend him yours…that’s if you can find it,” I said, winking at him.

I didn’t have a clue as to where this guy was going or what he was fishing for—there was no way in hell they could’ve known it was us. I made sure I took the proper precautions before we ransacked their stash house—all fingers pointed to Jimmy Gold.

He snapped his whip against my shoulder and I yelped, more from shock than from pain.

I gritted my teeth, lifting my head to meet his slanted eyes.

“Jimmy Gold took your fucking shit, we don’t ride with the mob no more, not since Victor went away. Now unless you have an issue with the gun deal I suggest you cut these fucking ties around me and let me go,” I grunted. “You’re only making it worse for you and the deal you have with our club.”

“How’s that?” He asked thoughtfully.

“You think the Bulldog will do business with you after you fucked our truce? You can kiss that deal goodbye after he finds out you took me,” I roared.

“The Bulldog pissed, as you people put it, on our deal the minute you stole from me.”

“Nobody took your fucking drugs,” I hissed.

Three more lashes of the whip, three more marks on my flesh, secured the three bullets I’d put in this pricks head.

“Untie me and let me fight like a fucking man. Or are you Dragons too pussy to unleash me,” I growled.

He laughed, cracking the whip and branding my chest with another fresh mark from the leather. I gritted my teeth through the fresh sting before glaring at him.

A Kick-Ass Fairy: A Memoir by Linda Zercoe
The Americans by John Jakes
Under His Wings by Naima Simone
Nuts in the Kitchen by Susan Herrmann Loomis
Objetos frágiles by Neil Gaiman
Pulse by Carman, Patrick
United (The Guardians Book 2) by Jessica Roe
Goddess of the Market: Ayn Rand and the American Right by Jennifer Burns
My Boyfriends' Dogs by Dandi Daley Mackall
El juez de Egipto 3 - La justicia del visir by Christian Jacq