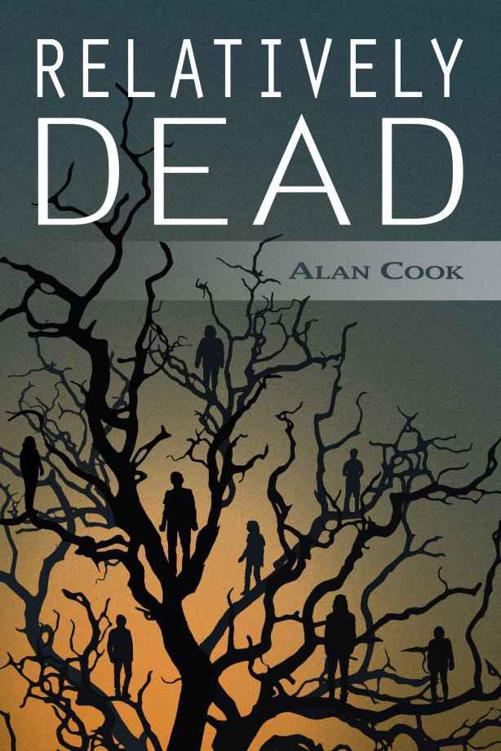 This book is a work of fiction. People, places, events and situations are the product of the author’s imagination. Any resemblance to actual persons, living or dead, or historical events, is purely coincidental.

No part of this book may be reproduced, stored in a retrieval system, or summarized by any means without the written permission of the author.

Walking the World: Memories and Adventures

The Saga of Bill the Hermit

A big thank you to Dr. Kathy Johnston for helping me with the icky dermatology stuff. Also to forensic genealogist Colleen Fitzpatrick, an expert on DNA. My wife, Bonny, helped with the editing. Any errors I’ll try to pin on someone else but, unfortunately, won’t succeed.

To my mother and grandmother who got me started.

Nobody knows the value of family like the person who doesn’t have one.

I’m speaking from experience. I didn’t have any relatives for many weeks last year. That’s when I had amnesia. My name is Carol Golden. Well, it’s not my real name. It’s what I called myself when I didn’t know what my real name was. Now I like it better than my real name.

When I recovered my identity (but not my memory) I found one of my relatives—my grandmother, Elizabeth Horton. My parents and my brother, Michael, were dead. Recently, I’d learned about another line of relatives who were cousins of Grandma, which meant they were my cousins, also. I talked to one of them—Jason Boyd—on the phone, and promised to visit him in California at some nebulous future date.

Now, a few days later, I was standing in front of the counter at Raleigh-Durham Airport, checking a single suitcase and preparing to go through security and face scrutiny and possible humiliation at the hands (literally) of the TSA staff. I was on my way to California to visit Jason Boyd.

However, it wasn’t a happy occasion. The day before I’d learned his grandson—also named Jason—had been murdered. I’d found relatives and already lost one of them. Grandma told me I’d never met either Jason. It didn’t matter. Call it a compulsion to collect relatives born from my amnesia, but I couldn’t not go.

I was bored—and depressed. I jabbed the button that opened the metal gate to the deer fence surrounding Grandma’s house, gardens, and expansive lawn and impatiently squeezed my slim body (if I do say so) through the slowly widening gap.

I was warm in spite of the coolness of the March morning air. As I walked along the gravel and dirt driveway to cool down on the final stretch of my five-plus mile daily run, I wondered what I should do with the rest of my life.

Butch, Grandma’s yellow Labrador Retriever, met me with a tennis ball in his mouth, begging me to throw it for him to chase. He was never bored as long as he had someone to play ball with. Why couldn’t I be like him? I threw the ball across the grass and he bounded after it, full of glee.

I passed the old house that was the original building on the farm in Chapel Hill, North Carolina, with its board siding from which the paint was long absent and metal roof Grandma installed a few years back, out of nostalgia, to protect the wood from rotting any more. She also had the brick chimney restored.

The house held no terrors for me despite being where my brother, Michael, and Paul Vigiano both tried to kill me. Paul wanted to gain control of my parents’ estate by getting me out of the way. He was currently out on bail, pending trial for attempted murder, but I’d successfully replaced him as executor of the estate and obtained a ruling that he couldn’t receive any benefit from it. My distrust of government made me skeptical about whether he would ever receive much of a prison sentence, but at least he was no longer a threat to me.

Michael, who’d tried to kill me at least four times, was dead. I was rich and had defeated my enemies. Like Alexander the Great, I had no more worlds to conquer. Well, there was my missing life before Michael hit me on the head, giving me amnesia, but doctors didn’t know whether I’d ever recover much of my memory.

That depressed me. Maybe if something exciting would happen to take my mind out of the endless loop of self pity.
Be careful what you wish for.
I entered the new house, built some twenty years before by my grandparents who tore down a smaller one that stood on the same spot. All was quiet. Grandma might be taking a nap, and Audrey, Grandma’s caretaker, could be anywhere. I determined to take off my warm-up suit and shower in one of the three bathrooms. I’d tried them all. Perhaps I would let the hot water melt me and I would run down the drain. Then I wouldn’t have to think about the future.

I’d moved into the master bedroom two months before after Audrey and I persuaded Grandma not to attempt to climb the stairs anymore. Of course, it had its own bathroom. There was no longer any point to showering around. I went up the stairs two at a time and turned left to cross the bridge over the first floor that led to the master bedroom.

I turned back to the right at the sound of Audrey’s voice, coming from the small room she used as an office. Cynthia was my real name. Cynthia Sakai. I preferred Carol because I didn’t remember much of my previous life as Cynthia.

Since Grandma called me Cynthia, Audrey did also. I answered to both names. I stepped into the room where Audrey sat at a wooden table that doubled as a desk. The smooth dark skin of Audrey’s forehead I admired so much was creased by a frown. She was working a calculator and staring at a computer monitor and looking frustrated.

I knew figures were not Audrey’s strong suit. I wanted to help. “Are you trying to balance Grandma’s bank account?”

“Ten thou…?” I almost gagged and flashed back to when I didn’t have any money. “It must be a mistake. Did Grandma make an error in her checkbook?”

“She doesn’t put entries in her checkbook anymore. She just writes checks. That’s why I go online every few days to look at her account and see what she’s done. She usually writes fairly small checks, but here are two entries for over five thousand apiece. It looks like they were checks made out to cash.”

“She won’t let me go into the bank with her.” Audrey sounded defensive.

My voice was too sharp.
Don’t shoot the messenger.
I’d been concerned about my own financial affairs and ignored Grandma’s, assuming she could take care of herself.

Grandma was asleep in her favorite chair in the family room, facing the large windows overlooking her beloved flower garden. Somehow she looked smaller than when I first saw her while attempting to regain my identity. And more fragile. Perhaps it was because her body was bent in repose, not ramrod straight as I remembered her from that meeting.

She awoke as Audrey and I came down the two wooden steps from the kitchen, and smiled at us. I gave her a kiss. “How are you feeling today?”

“Fine. Good as ever.” She straightened her back and looked more like the take-charge woman she’d undoubtedly been for most of her life.

I let Audrey broach the subject of the money, but I watched Grandma closely. At first, when Audrey mentioned the large amounts of the checks payable to cash, Grandma looked confused. Then her face changed to an expression I interpreted as something akin to fright. What was going on?

Audrey stopped talking and we waited for a response. Grandma turned her head and looked out the window, as if watching for someone. Finally, she spoke. “Promise you won’t say anything to anybody.”

I was getting impatient. “About what? What’s the big secret?”

Grandma hesitated and again looked around. “It’s Michael. He warned me not to tell anybody.”

“Michael’s dead.” I spoke with more emphasis than necessary.
Déjà vu
. I could almost believe Michael had returned to haunt Grandma and me. He’d come back from the “dead” once before.

Grandma shook her head. “He called me. He was in an auto accident. He’s in…California, I think. They’re holding him. He had to pay for the other car and injuries to the passengers. He told me how to wire the money to him using Western Union.”

Audrey and I looked at each other, not believing what we were hearing. I quickly put my finger to my lips, meaning,
don’t say anything to upset the old lady
. Audrey used her most soothing voice. “Tell us everything that happened.”

Slowly, we coaxed the story out of her. Judging from the bank records and Grandma’s memory, the first call came a week ago. Audrey and I must have been out of the house. Grandma kept a handset with her so she could easily answer the phone when we were out. “Michael” demanded five thousand dollars.

Grandma asked Audrey to drive her to the bank. She had plenty of cash in her checking account because a CD recently matured. She claimed the teller gave her the cash without any argument. She was a thirty-five year customer of the bank. Her instructions were to take the cash next door to a drugstore that made Western Union money transfers. When she got home and Audrey was out of the room she followed the instructions of the scammer by calling his number and leaving the information about the transfer. It was all very simple. Too simple.

I remembered something. “I’ve been getting hang-ups. Phone calls where nobody was on the line.”

Audrey nodded. “Same here. I received two this morning.” She looked at the sheet she’d printed from the bank records. “You got the second call three days ago, didn’t you—Tuesday morning?”

“Michael needed more money. He said he needed another five thou—”

“You told me to take you to the bank again.” Audrey was verging on panic. “I asked why since you’d just been several days before. You said—”

“It’s okay.” I patted Audrey’s knee. I tried to be the calming influence, although I felt far from calm. Audrey was trained not to question Grandma’s orders. “Grandma, I’m afraid you’ve been scammed.”

She looked shocked. Comprehension dawned on her face. “Michael’s dead, isn’t he? They got my money. They took advantage of me.” Tears rolled down her cheeks.

“We’ll try to get it back.” I sounded a lot more confident than I felt as I hugged Grandma. Recently, Grandma sometimes called Audrey “the black lady” and me “the oriental girl” instead of using our names. I thought of it as an eccentricity, but it was apparently more than that. Was her memory fading?

The phone rang. Audrey reached for the handset sitting on the table beside Grandma. I grabbed it first. I had an idea. “Grandma, would you answer it? It may be the scammer.” I glanced at the small screen. It had captured the caller’s number.

She nodded. She looked alert.

My brain was in overdrive. “We’ll wait until the answering machine comes on. If we time it right we might be able to record the call.”

I counted four rings, then pushed the answer button and handed Grandma the handset. Grandma said hello over the sound of Audrey’s recorded message. I hoped if it was the scammer he wouldn’t hang up. He didn’t. I could tell from the look on Grandma’s face it was him.