Reno Gabrini: For His Lover (The Mob Boss Series Book 14) 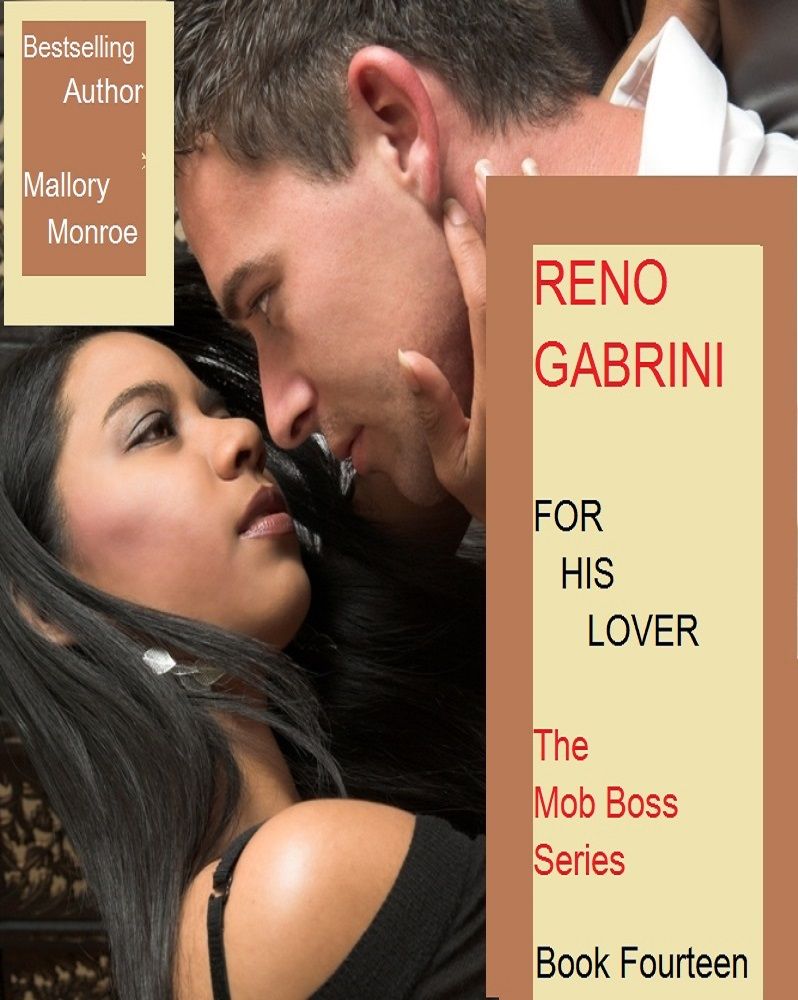 All rights
reserved.  Any use of the materials contained in this book without the
expressed written consent of the author and/or her affiliates, including scanning,
uploading and downloading at file sharing and other sites, and distribution of
this book by way of the Internet or any other means, is illegal and strictly
prohibited.

IT IS ILLEGAL TO UPLOAD THIS
BOOK TO ANY FILE SHARING SITE.

IT IS ILLEGAL TO DOWNLOAD
THIS BOOK FROM ANY FILE SHARING SITE.

WITHOUT THE WRITTEN CONSENT
OF

THE AUTHOR AND AUSTIN BROOK
PUBLISHING.

This novel
is a work of fiction.  All characters are fictitious.  Any
similarities to anyone living or dead are completely accidental.  The
specific mention of known places or venues are not meant to be exact replicas
of those places, but are purposely embellished or imagined for the story’s
sake.

for more information on all titles.

Behind every great fortune

The grand reopening of the PaLargio Hotel and Casino on the
Vegas Strip created a traffic jam of stretch limousines outside its doors, and
a who’s who of celebrities and dignitaries under its roof.

In his white
tux that highlighted his fine muscular frame, and with his beautiful brown hair
piled high and his brilliant blue eyes intense but friendly, he projected the
perfect image of youth and strength for the new and improved hotel.

All of the other owners around the Strip were
old white guys with about as much style as the toupees they wore.

But word got around that this tough guy
Gabrini, this hot shot Italian, was in a league of his own.

Some of the guests shook Reno’s hand quickly and then hurried
toward what was billed as the largest casino on the Strip, and with the biggest
bank.

They were the real gamblers who
didn’t show up to hobnob with the owner.

They showed up to make big money.

Others, the types who never turned down a chance to get their pictures
taken, held court with Reno, laughing and talking about nothingness, before he
was forced to move them along in favor of the next big name.

His security force stood along the edges of the opulent
palace, in their Secret Service-styled black suits, and to a man they were
roundly impressed.

The idea that their
boss, a hardcore gangster in the long run, could meet and greet and wine and
dine so many uppity mucks without appearing to so much as break a sweat,
astounded them.

He was one of them.

Back home, in Jersey, they all came up the
same way.

They all were raised to be
rough and tough and gruff as a motherfuck.

But Reno came to Vegas, when he was barely nineteen, and took the place
by storm.

Now he was in his twenties and
was nearly as big as the owners of Caesar’s and Wynn’s.

Now he was looking every inch the part of the
big shot businessman.

They looked at
each other, smiled and nodded.

Reno acquired the PaLargio just six months ago, snatching it
out of Receivership with the financial backing of some of his less-than-savory,
but loyal mob friends.

He reworked the
crumbling façade out front, upgraded every inch of the hotel inside, and
expanded the casino to become the envy of the Strip.

And he was already ready, on his opening
night, to declare all of his hard work a rousing success.

The PaLargio was about to go to the top of
the heap in Vegas, and Reno was on top of the world.

Until Vinny Steletti, a trusted childhood friend he brought
over from Jersey, walked over and interrupted the conversation he was having
with an A-list actress.

“You got a
minute, boss?” Vinny asked.

Reno smiled his high wattage smile at the beautiful actress.

He was glad to get away.

“Will you excuse me?”

The actress smiled her own high wattage smile, the same smile
that undoubtedly got her all of those meaty roles to begin with, and wrapped
her fur coat around her bone-thin body.

“For now,” she said mischievously.

And then she and her entourage walked away.

“What is it?” Reno asked Vinny before yet another dignitary
hurried over and commanded his attention.

“Stephanie’s at the bar. She asked if she could have a word.”

Her
timing was lousy.

She should have known
he would be too preoccupied on his opening night.

But she only came when she really needed
him.

“I need more bodies out here in the
lobby,” he said.

“Where the hell is
everybody anyway?”

“I saw a few in the casino playing the
tables, can you believe those motherfuckers?

A few were in the lounge.”

“Round them up,” Reno ordered.

“Tell them to get their asses out here to
meet and greet until I get back.”

But as Reno was about to leave, Vinny touched the sleeve of his white
tux.

Reno looked at his old friend.

Reno knew what that meant.

Vinny had a question that would be on point as Reno’s friend, but
totally out of bound as his employee.

“What is it?” Reno asked, giving permission.

“Of all of your girlfriends, of all of these ladies you’re fooling
around with, you seem to elevate Stephanie to your number one.

She has so
much drama going on she could write a book.

And she ain’t nearly as pretty as your other ladies.

Reno knew a superficial man like Vinny would never
understand.

“She has a good heart,” he
responded anyway.

“And I don’t like how
everybody keeps trampling over it.”

“So what
are you saying, Reno?

Reno’s offended look caused Vinny to wipe that smile off of
his face.

And to attempt damage control
without hesitation.

“I didn’t mean
anything by it though.

It was just a
joke.”

“She’s one of my oldest and dearest
friends.

Watch yourself,” he added, and
left Vinny’s side.

Vinny pulled out a
handkerchief and wiped his forehead.

Reno walked swiftly across the massive lobby toward the hotel
bar.

The night was young, and so was
Reno.

But for all the pressure that
running an organization this vast was putting on him, he already felt like a
very old man.

Drained already, he
thought as he looked at his watch.

And
it was barely nine pm.

He saw Stephanie Deevers at the bar, her long legs crossed,
as she sipped her drink.

She wore shades
indoors, which made him know that her bruises had not healed.

Or were there new ones?

“That bastard bother you again?” Reno asked as soon as he
arrived at her side.

“After what you did to him?” Stephanie responded.

“He cried like a fucking baby,” Reno said with a grin.

Stephanie smiled too, jerked her long, blond hair back, and
looked at him.

“Thank you,” she said,
heartfelt.

Reno stared at her.

She was not a
beautiful woman.

But Reno loved
her.

“I should have let you deal with him months ago.”

Then he stared at
her.

He could sense her sadness even if
he couldn’t see her eyes.

His look
turned serious too.

How are you doing?”

“Yeah, the truth,
what are you talking?”

“I need your help.

I
need the kind of help only you can give to me.

But I don’t want you to cheat on your first love.”

What was she talking about?

“The PaLargio is your first true love and this is her biggest night.”

“Okay,
whatever you say.”

“It’s true,” Stephanie said with a smile of her own.

“The PaLargio is your first true lover,
Reno.

You may fall hard for another woman in the
future.

But for right now, the PaLargio is that
woman.”

Reno was never a man to dispute the truth.

He knew he put his heart and soul in this
place.

He knew, deep down, Stephanie was
right.

“I shouldn’t be here on your big night,” she said.

“I’m always bringing my problems to you, and
that’s not fair.

Again, Reno wasn’t going to argue with the truth.

She looked at him.

Reno glanced down, at her big breasts, and then back into her
face.

His look was hooded now.

And there’s nobody I can turn
to.

Ever since we were teenagers in
Jersey, I was always turning to you to solve my problems.

You always came through for me, Reno.

In and out of bed.

But your success in bed made me yours for
life.

Your lover for life.”

“I’m
sure somebody else will fill that bill,” he said.

But he was only feeding his ego.

He knew he was the one.

“I’ve yet to meet the man who can satisfy me like you do,”
Stephanie said, confirming the feed.

“Nobody has ever been able to do me like you do.”

But he knew what she was going through with that prick of a husband of
hers.

And with those ungrateful
relatives who just wanted her money.

He
wasn’t about to turn her down.

“Go
upstairs,” he said to her.

She had a key
to the room.

To
their
room, as she saw it.

“I’ve got to make sure my people are in place, and then I’ll be up.”

He was about to go, but Stephanie touched his hand.

“What are you thanking me for?”

He had a little edge in his voice.

“It’ll be my pleasure too.”

Stephanie smiled as Reno walked away.

He’d never know how much she loved him.

He’d never know how much she depended on
him.

No man alive had ever treated her
so well, and that beautiful fact alone would meld her to him forever.

No bitch on earth was ever going to get
between her and her Reno.

Not even his
beloved PaLargio.

Which was why, she
thought with a slick smile, she picked this night especially to make an
appearance.

Then she drained the last of her drink, grabbed her clutch,
and headed upstairs.

Outside at the PaLargio, at the back end of a long line of
limousines waiting to pull up under the portico and decamp their rich
passengers, Alberto Serrantz, a limo driver, leaned his head out of his
vehicle’s window.

One of the army of men handling outside security for Reno,
and handling, as it happened, traffic control, walked over to the limo.

“Yeah you and every uppity muck out here.

“Oh, so you’re a wise guy security guard?” he asked.

“We’ve got us a fucking wise guy here.

Telling me to wait my turn.

But Alberto didn’t have to look.

He knew there had to be at least ten limos
ahead of his.

But his situation was
different.

“All of those so-called
elites combined wouldn’t add up to the person I’ve got in my ride.”