For a spider I killed in Texas once,
and all my swallowed ghosts

It is easy to go down into Hell; night and day, the gates of dark Death stand wide; but to climb up back again, to retrace one's steps to the upper air—there's the rub, the task.

T
O HAVE DIED ONCE IS ENOUGH.
—
V
IRGIL 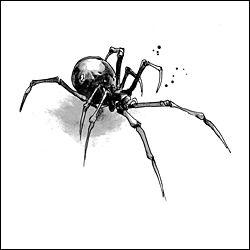 Dante stared and stared at the corpse, but a blindness waited behind his eyes. It was as if he couldn't see the body; couldn't grasp it, or what it meant.

He had never felt fear like this, not in the worst moments of his life. The angel madness was thick in him, and with it came the inevitable dread: a metallic horror that slid like a sword down his throat. His skin crawled as if trying to escape; goose bumps sprang up in patches on his arms and neck and prickled uncontrollably across his face. His eyes were open but he couldn't see. His mouth tasted like oil.

What did it mean?

What did it mean?

"O Jesus," he whispered. "Let's pretend it's all a bad dream, why don't we? Leave the damn thing here and go back to bed and hope it's gone by morning."

His foster-brother, Jet, grinned as Cain must have grinned at Abel. "Over your dead body," he said.

It wasn't the corpse of someone who looked like him, but Dante himself: he could see the tiny scar above the body's right eye where he had fallen into the stairs one Easter, hunting chocolate eggs. Just below the body's left elbow was the long white gash where a bucking saw-blade had cut into his arm one day when he and Jet were building their tree-fort. (Father had been out delivering a baby, so it was Mother who took over, swabbing the cut with mercurochrome and putting in the stitches, all fifty-three of them. Ought to save herself the trouble by running his arm through her sewing machine, she said, but she had been trained as a nurse and her fingers were steady.)

Even in the cold, the boathouse stank of mildew and engine oil and gutted fish. Jet and Sarah had rigged up an operating table, laying two-by-fours across the thwarts of the flat-bottomed rowboat. They had put Dante's corpse with its head in the stern, just touching the little Evinrude 2-stroke motor.

Jesus. What did it mean? That you're going to die, he told himself savagely. What do you think it foretells—a downturn in the economy? A low-pressure system bringing showers and scattered flurries? You're dying, dying, good as dead already and you know, you know it, somehow you can feel it coming somehow the angel's showing you O Christ Jesus—

He caught hold of himself.

Bad. Bad scientist, theorizing before all the data's in. Father would be disappointed (as usual). Examine the facts. Don't jump to conclusions. Lots of meanings for death symbols. Renewal. Sudden Change. Regeneration. 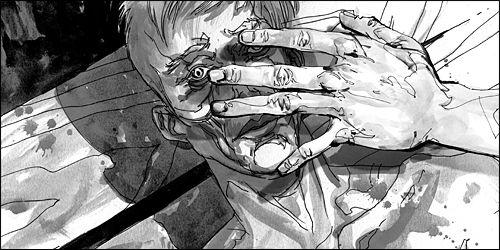 He looked again at his body, lying naked and pathetically vulnerable in the rowboat, with its feet hanging out over the prow. Renewal. Yeah, right.

In death, his pale skin was white as frost. His long white fingers looked sinister and strange. He imagined them creeping away, each hand a clumsy white spider crawling over the gunnels and dropping from the rowboat to scuttle out of sight, hiding behind the old oars and buckets of paint, the aluminum bait pails and fishing poles and disassembled Mercury outboard motor.

Dante's hair was a red-gold fringe around a high white forehead. He had his grandfather's ginger eyebrows, winging sharply up and out, like Satan's. The eyes below were narrow and blue. They stared unblinking at the naked boathouse bulb hanging overhead.

With a shaking hand Dante reached out and closed his own dead eyes.

Jet was papering the cold concrete floor with aging pages from The New York Times, in case things got messy. "You make a lovely corpse," he remarked. "I always thought you would."

"Pity Father isn't here to admire it," Dante muttered. (At the end of his worst nightmares, his father came with a scalpel to cut him open. The memory always stayed with Dante long after he woke: the long slide of the scalpel through his organs. The feel of his heart, throbbing, cupped in his father's careful hands.)

Strictly speaking, it was Jet who found the corpse. Dante had wanted no part of it.

But once the body was there, lying on his bedroom dresser, even Dante admitted they had to know where it had come from and what the hell it meant. If it was an omen as Jet pointed out, then they had better find out what the cause of death had been, so they could protect the real Dante from it. But of course they couldn't do an autopsy upstairs, even in the bathroom; Mother was a light sleeper and Father got up twice a night to pee. The boathouse, though cold and damp, was the only safe place. There they would have privacy and lots of water, plenty of pails and good light overhead.

It was after midnight. Smuggling the corpse out of the house had triggered in Dante a flood of childhood memories from a dozen other times when he and Jet and little Sarah had crept down the stairs at night, whispering and shushing one another, bumping into banisters in the dark and terrified they would wake their parents.

Quietly Dante's sister Sarah eased herself through the creaky boathouse door. In her right hand she carried an empty plastic ice-cream pail with a sponge, a pair of rubber gloves, and one of Aunt Sophie's butcher knives wedged next to a small hardcover book from Dad's study.

Sarah looked older than her twenty-eight years, Dante thought. Grim and running to fat. There was a time when he had played peek-a-boo with her, tickled her until her little round face turned red from laughing and her limbs went weak; a time when he had flown her like an airplane through the house, harrying Aunt Sophie and strafing the mortified cats.

"You were enjoying the wait?"

Getting on the wrong side of Sarah's tongue, as Jet had once observed, was like getting your face caught in a waffle iron.

Sarah studied her brother with eyes red from the crying she had done earlier, before she'd gotten herself under control. "You still want to go through with this?"

"Well, I guess that's settled," Dante said lightly. He was amazed at how calm his voice sounded. How strange it was, to sit inside his own body and see it walk with his usual easy stride, hear it talk with his usual easy flippancy, too blind to see that his life had just been blown apart. Too numb to feel the angel waking in his midst.

But Dante felt it. He felt his heart running dry.

Chains snapping inside his chest.

The unfurling of terrible wings.

Jet picked the old book out of Sarah's ice-cream pail and flipped through its opening pages. "Miller's
Practical Pathology, Including Morbid Anatomy and Post-Mortem Technique
. Perfect." He adopted Father's Demonstration Voice, the one he used when examining specimens under the microscope or explaining horrible diseases. " 'Standing on the right side of the body, the pathologist grips his knife firmly with the right hand (Figure 1).' "

Jet grabbed an aluminum bait pail and flipped it over hext to the rowboat so he could squat by the corpse. He glanced at Dante, his dark eyes sharp as obsidian. "Keep your grip firm!" he commanded. "You wouldn't want to make a mess now, would you? Not on this body."

"Yes, Master! It shall be as you desire," Jet wheezed, using Aunt Sophie's thickest Hungarian accent. Hunching his thin shoulders, he fussed at the body in the rowboat, smoothing its red-gold hair, pressing its arms neatly to its thin white flanks. He bobbed his head at Dante. "Your subject, Baron." A wicked grin flashed across Jet's face; lacy wings rose and fell on his right cheek.

It had been years since Dante had noticed Jet's butterfly birthmark, but now it fluttered before his angel's eyes, an evil portent. "Master's going to beat the shit out of Igor if Igor doesn't shut up."

(It was always this way with god damn Jet. "Like the two serpents around Hippocrates' staff," Father said once, chuckling. "All hiss and spit." ...Easy to say if you weren't the one with Jet's venom in your eye.)

Dante swallowed. The hilt of Aunt Sophie's biggest butcher knife seemed to crawl like a wasp in his hand. "Okay," he said, licking his lips. "Okay." 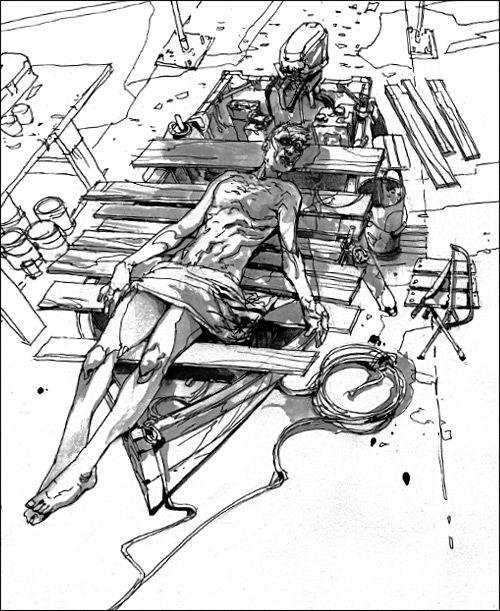 "Shit—you must be scared." There was something like awe in Sarah's voice. "To risk getting bloodstains on your jacket!"

Dante blinked, then looked down. He was still wearing his favorite mandarin smoking jacket, the raw silk one with the wide lapels, wound about with dragons and steam. "Oh. Good point." He pulled it off, looking for someplace where it wouldn't get spotted with oil or old fish guts.

Perhaps it would be best if he slipped up to the house to hang the jacket up. He could pour himself three fingers of Glenlivet to steady his nerves—

Sarah shattered his fantasy. "Here, give it to me. The girl's waiting and the condom's on, Casanova. It's time to perform."

Dante surrendered his jacket. Then, methodically, he removed his gold and garnet cuff links and put them in the pocket of his baggy black pants. He rolled up the sleeves of his rich brown dress shirt and pulled on the rubber gloves Sarah had pilfered from the kitchen.

Jet held up Miller's
Practical Pathology
. " 'Care must be taken not to go too deeply when incising the abdomen, in order to avoid cutting the liver or bowel,' " he recited.