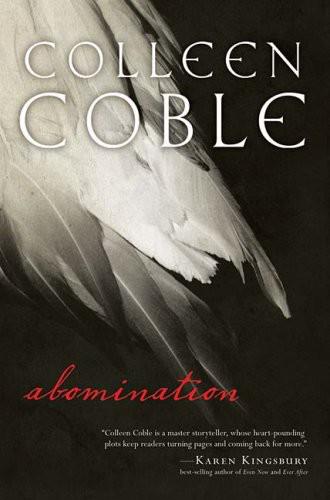 “
Abomination
is a chilling tale of an elusive serial killer . . . that will keep you guessing up until the end.”

“[Colleen Coble] imbues this novel with the deep and gritty choices facing her characters, choices that often hinge on faith. She does not flinch from the fanaticism of her villain, yet she brings the question of guilt, remorse and finally, the promise of redemption to her characters.”

“From the very first page,
Abomination
is packed with drama, mystery, and intrigue. It will keep you turning the pages as fast as you can, begging for the ending to come so you can figure out how all the pieces fit together.”

“Coble again delivers a suspense-packed story that is hard to put down
.
”

“[A] heart-pounding suspense where the plot twists and turns in unfathomable directions that hold you spellbound to the very end!”

“[C]rackles with an ominous electricity, pulling you inside the mind of a killer who is terrifyingly twisted . . . and terrifyingly real. The pages will race by as you read, but I guarantee your heart will race even faster.”

—T.L. Hines, author of
Waking Lazarus
and
The Dead Whisper On

“[A]nother suspenseful offering from the artistic mind of Colleen Coble.
Abomination
reminds us that her talent and creativity know no bounds!”

“Colleen Coble's books just keep getting better and better. I didn't want to put
Abomination
down. I read it in one day.”

OTHER BOOKS BY COLLEEN COBLE

Thomas Nelson, Inc., books may be purchased in bulk for educational, business, fund-raising, or sales promotional use. For information, please e-mail [email protected]

To my parents, George and Peggy Rhoads.
Your faith in me has never wavered.

N
IGHT CREPT OVER THE HILLS, SMOTHERING THE LANDSCAPE in a cocoon of darkness that would hide him in a few minutes. He’d abandoned his real name for one more fitting of his strength and intellect. Gideon was what he called himself when clouds hid the moon and the shadows gathered. Gideon, the Destroyer of Evil.

Before the moonlight could fade completely, he flipped down the sun visor and stared into the face of his wife, Miranda—a photo of her as she had once been.

As she would be again.

The blare of a horn startled him, and he slapped the visor back into place as a gray SUV careened past where his car sat on the narrow shoulder. The vehicle splashed water from a mud puddle over his car. He bit back an expletive, knowing such words ill befit a man of his intellect. He twisted the key and heard the car engine purr to life. Easing onto the road, he hunched over the wheel and stared into the fog. The turnoff to the lake was just ahead. No car lights illuminated the road ahead or behind. He turned the vehicle onto the muddy track and rolled down the window to let in the fresh scent of the water. The lane was meant for tractors, and visitors rarely trespassed. The owners would never even know he’d been here.

The lake reflected the golden orb of the moon. He parked and turned off the car. The cacophony of crickets and tree frogs paused, then started up again as he stepped into the mud and went around to the trunk. The lid sprang open at his touch, and he looked down into the woman’s face. As with the others, preludes to the grand finale, he’d stripped her of beauty. This one would never lash a man with her tongue again.

Securing the gray wool blanket around the body, he hauled it out and dumped it on the ground. He tucked a partial peanut butter sandwich under the sinner’s blouse. He took hold of the end of the blanket and pulled the bundle down to the water.

Reaching the small pier, he paused and listened, then stepped onto the rickety boards. The body slid easily across the worn wood. Once he reached the end of the dock, he dropped the end of the blanket and settled onto the weather-scoured boards to wait. He pulled his GPS from his pocket and noted the coordinates. Close enough. He didn’t plan to go far from shore.

A hint of pine mingled on the night air with the scent of water. The chilly night began to creep into his bones. Loons called, and he straightened and stood to stamp his feet.

Then the angels came.

Gideon held his breath as they glided into the shaft of moonlight. Silent and beautiful, they moved as one along the placid surface of the water. He counted one, two, ten. The largest one’s wings spanned at least eight feet.

He shoved the body into the bottom of a small boat, where it lay amid the flotsam of tackle boxes, tarps, and fishing poles. Gideon hurried to the shore, where he gathered rocks in a bucket. Carrying his burden, he went back to the boat and set the bucket into the boat as well. The boat tipped when he stepped in, but he was quick on his feet and moved to the center, where he settled onto the seat.

Years of use had worn the oars smooth, and they fit into his palms as if they’d been carved for his hands. His muscles flexed, and he dipped the oars into the water. The boat moved smoothly through the ripples. They barely noticed his approach. Their voices raised the hair on his arms and back.

About five feet from them, he laid the oars back against the sides of the boat, then crouched beside the body. Opening the blanket, he piled rocks from the bucket inside, then tied the ends with the rope he’d brought.

They moved around him. One bent her neck and looked at him. Something about the way she held her head made him catch his breath. She glided nearer. They would wait with him, patient, long-suffering, until he secured the ultimate prize. Then one rose into the air. The others soared heavenward as well, and he was left alone with a single feather wafting toward him on the shifting fog. He caught it in his hand and brought it to his face. He brushed it over his lips like a kiss. A benediction.

His gaze lit on the body. Frowning, he put the feather in his pocket. He balled his fists, then stooped and heaved the bundle over the side. The water rippled, then closed over the space. He turned around and began to row back to shore.

The house was quiet when he got home. He peeked in on his daughter, Odette. Seventeen years old with a soul as old as Moses, she slept with one hand on her cheek. So innocent the sight made his heart swell in his chest.

What would happen to her if he were caught?

His lip curled. They weren’t smart enough to find him. Besides, he was surrounded by a mantle of protection. He was invincible as long as his angels stayed with him. Pressing a kiss on his daughter’s hair, he went down the hall to his office and entered, shutting the door. The computer screen lit as soon as he lifted the laptop’s lid. He launched the browser and went to the geocaching site.

After he put in the GPS coordinates, he typed:

ABOMINATIONS WILL FIND YOU.

S
HE DIDN’T KNOW HOW FAR SHE’D DRIVEN—ALL SHE KNEW was that it wasn’t far enough. The lights on the dash moved in her vision, growing and receding as she gripped the steering wheel and struggled to hang on to consciousness. Nothing but the moon illuminated this lonely stretch of highway. The digital clock read 8:03.

Panic beat in her chest like a bird trying to escape her rib cage. She had to get away, had to find a place to hide. Her hand touched her ribs and came away with sticky wetness. How much blood had she lost? Her fingers probed the spot again, and she discovered a six-inch gash. Had she been in a car accident?

Her gaze wandered to the rearview mirror, and she moved it so she could see the child in the car seat in the back. Confusion clouded her mind. She struggled to put a name to the little girl who looked to be about two. Her child? Her gaze took in the worn backpack beside the sleeping child, but nothing looked familiar.

A green sign flashed past as the car weaved. Rock Harbor, ten miles. She had no idea where this town was located, not even what state. Maybe she was just tired. Too frightened to think, to plan. Her head ached abominably, and her vision continued to waver.

Headlights haloed with distorted rings of color sprang into view behind her, and the panic surged into her throat again. She pressed her foot to the accelerator.

He couldn’t find her.

The car responded to the acceleration at first. Her tires zoomed along the road, their hum sounding loud inside the car. The other vehicle receded in her rearview mirror. But her elation faded when the wheel shuddered in her hands. The engine coughed.