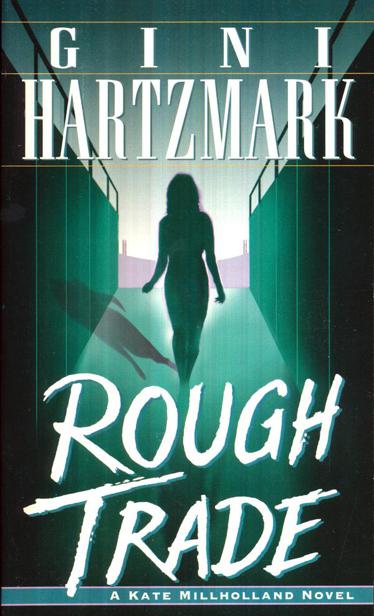 “Exceptional: Hartzmark paints a fascinating picture of the world of drug research with characters who are believable, varied, and likable (even the villains are the kind you love to hate). The intensity of the complex plot never wavers, and the ending explains just enough to satisfy without being too pat.”
—Publishers Weekly

“A cleverly plotted and convincing inside look at freewheeling financial crooks and wizards... Hartzmark keeps the story moving swiftly to an explosive conclusion.”

Please turn to the back of the book for an interview with Gini Hartzmark.

Published by The Ballantine Publishing Group:

Books published by The Ballantine Publishing Group are available at quantity discounts on bulk purchases for premium, educational, fund-raising, and special sales use. For details, please call 1-800-733-3000.

This book is a work of fiction. Names, characters, places, and incidents are products of the author’s imagination or are used fictitiously. Any resemblance to actual people or events, living or dead, is entirely coincidental.

Sale of this book without a front cover may be unauthorized. If this book is coverless, it may have been reported to the publisher as “unsold or destroyed” and neither the author nor the publisher may have received payment for it.

Published by The Ballantine Publishing Group

All rights reserved under International and Pan-American Copyright Conventions. Published in the United States by The Ballantine Publishing Group, a division of Random House, Inc., New York, and simultaneously in Canada by Random House of Canada Limited, Toronto.

I’d like to thank Dee and Lee Hartzmark and Debby Jacobs for contributing to my football education and faithfully keeping me up to date as the Cleveland Browns’ saga unfolded. Thanks also to Heather Raaf, Chuck Zellmer, Sid Dworkin, Mark Schwartz, Don McIntyre, and Steve Wasserman for pitching in with their special areas of expertise. Additional thanks to Donald Maass, Susan Ran-dol, Teague Von Bohlen, and Lisa Collins for their help in shaping the manuscript and Jane Lassar and Barb Varney for helping me get a feel for Milwaukee. As always I am in debt to Dawn Machen and Leigh Trainer for keeping my life on track so that I can write books.

Finally I ask forgiveness of the good people of Milwaukee for allowing me to give them a football team only to threaten to take it away.

In my line of work you get used to other people’s distress the same way that doctors grow inured to other people’s pain. I know that sounds cold, but that distance is important. It’s what makes it possible to wade in and do what needs to be done. Don’t get me wrong. I’m not pretending that what I do should be compared with easing suffering or saving lives. I am a deal lawyer, not a doctor. But that doesn’t mean I’m not a specialist. Believe me, when the bank has you by the balls, you don’t call a urologist. You call me.

That still didn’t mean that Beau Rendell wanted me to be there. No one who fancies himself the master of his particular universe wants a woman less than half his age telling him how he’s screwed up. Even his son, Jeff, who’d practically begged me to come, now seemed miserable to find that I was actually here. Not that I blamed him. After all, my presence could mean only one thing. The situation with his father had finally deteriorated to the point where they both needed lawyers.

For secrecy’s sake we were meeting at Beau Rendell’s house in River Hills, an exclusive suburb of Milwaukee. The two sides stared at each other across the glass and chrome travesty that passed for a dining room table, Jeff Rendell and I on one side; his father Beau, the owner of the Milwaukee Monarchs football team, and his longtime lawyer and drinking buddy, Harald Feiss, on the other. Outside it was raining. Cold, fat drops smeared the large plate-glass window that looked out over the sodden backyard. It had been coming down for days, and the ground had long ago exhausted its ability to absorb the water, which lay in frigid pools that filled the low spots in the grass. I could only imagine what it would be like at the stadium that afternoon when the Monarchs took the field against the Vikings. No doubt things would get ugly.

Even though I usually don’t follow football, I knew that
ugly
was a word that had been getting a lot of use in connection with the Monarchs. So far, this season, like the several before it, had been a disaster. Plagued by losses on the field as well as off, Beau had surprised everyone by firing the team’s general manager and replacing him with his son, Jeff. Now, in addition to a string of humiliating defeats, discord reigned in the team’s front office—a situation that had been reported in embarrassing detail in the press.

But what the media didn’t know—and what Beau was desperate that they not find out—was that the Monarchs were also on the verge of bankruptcy. With his seventieth birthday fast approaching and one heart attack already behind him, Beau Rendell had made one last desperate attempt to finally buy the championship that had so long eluded him. Using his shares of the team as collateral, he had borrowed heavily to sign a pair of franchise players. One had broken his back his first time in a Monarchs uniform and the other had ended up in jail for aggravated assault. However, both continued to collect their multimillion dollar salaries.

Through it all, the Milwaukee fans had done what they do best—filled the stadium and steadfastly supported their team. Unfortunately, the same could not be said for the bank. During the preseason Beau had defaulted on the loan. Under the terms of his agreement he then had ninety days to correct the default. As of today, he had ten days left to come up with the $18 million payment. If he couldn’t produce the cash, the bank would make the situation public, call the loan, and force the team into bankruptcy. In a country where toppling the mighty is second only to football as a form of public entertainment, I knew that the same press that had kept Beau Rendell on a pedestal for the last thirty years would be only too happy to report every detail of his fall.

Still, I had to confess that sitting at the head of his own table Beau Rendell did not look like a desperate man facing an impossible situation. Actually, he just looked pissed. He might be on the ropes, but he was still very much a man who expected to get what he wanted. Normally I’m glad to see people like Beau finally get what’s coming to them, but not today. Beau’s son was married to one of my closest childhood friends, and I knew that whatever forces stood poised to flail her husband’s family would end up raining their blows down on Chrissy, too.

I honestly don’t think I would have made the trip for anyone else. I was in the middle of a particularly complex transaction, a high-profile deal for difficult clients, and I had no business being out of the office, much less Chicago. As it was, the fear that something would happen while I was away—something that would expose my absence and provide ammunition for my critics—was already making my nerves sing like a high-voltage wire.

As we waited to begin, there was no small talk and the atmosphere in the room was almost unbearably strained. I found myself wishing for a cup of coffee, not just for the caffeine, but to have something to occupy my hands. Unfortunately, Beau wasn’t the domestic type and the last of the Mrs. Rendells had been handed her divorce papers nearly a decade ago. I briefly considered getting up and making some myself—at least it would have gotten me out of the room for a while—but Beau was definitely of the generation that equated domesticity with weakness. So I kept my seat.

When the doorbell rang, Jeff got up to answer it, leaving Harald Feiss and me to glare at each other. Feiss was a contemporary of Beau’s, thrice divorced, who still fancied himself something of a swinger. I found I disliked him less for his hair plugs than for the preening air of self-importance that hung about him like the scent of stale gin.

Beau ignored us both. He was busy meticulously diagramming plays on the yellow pad in front of him. While the trend in the NFL was to give increasing autonomy to the head coach, this concept was nowhere in evidence in Milwaukee. Beau Rendell was a football man, an owner from the old school, and when it came to the Monarchs, he was the one who called the shots... at least for ten more days.

Katharine Anne Prescott Millholland—I was named for an heiress, an eccentric spinster, a lumber magnate, and an opium baron. In my family they never let you forget who you are—or where you come from. The fact is that in the ever-dwindling universe that is Chicago society, my family still sits at the top. My mother, Astrid E. Millholland, is arguably one of the most socially prominent women in the country. Indeed, when someone once asked her what the
E
in her name stood for, she replied, “Establishment.” Her middle name is really Eunice, but you get the picture.

Chrissy Rendell, on the other hand, was hardly to the fund-raiser born, which is one of the reasons ours has always been such an unlikely friendship. Her father was an orthodontist, a man who, my mother never tired of pointing out, made his living putting his hands in other people’s mouths. Chrissy’s mother was a socially ambitious woman, as anxious to find a way into the suffocating confines of North Shore society as I was to find a way out. She was relentless in her efforts to push the two of us together, though I’m sure that Chrissy had little interest in befriending a sharp-tongued and sullen thing like me, even if I was a Millholland. Even then she was already everything I would never be—lighthearted, beautiful, and every bit as at ease in the world as she was in her own skin. But we did have one thing in common—our mothers—overbearing women who imposed their rigid expectations for us with the same zealous discipline with which they conducted their own lives.

I have no doubt that by high school Chrissy’s mother had come to regret her efforts to bring us together. I know that my mother spared no breath in putting the blame for our transgressions squarely on Chrissy’s shoulders—not that either of us cared. We were much too busy running wild. By graduation Chrissy had a collection of little black dresses roughly the size of postage stamps and a well-developed preference for commodities traders over high school boys. I, on the other hand, shook up the North Shore by dating Stephen Azorini, whose father was suspected (correctly) of having ties to organized crime.

Of course, we’ve both straightened out since then, a fact that neither of us seems able to quite get over. Chrissy is not just married, but a mother now, her party-girl days behind her. I have a corner office and a reputation as a corporate gunslinger to uphold. But it is less the idea of how far we’ve come that is disconcerting, but rather, as the years have passed, how much higher the stakes have grown.

I got married the summer after law school, but I was a widow before my first anniversary. My husband, Russell, was diagnosed with brain cancer three weeks after our honeymoon. Chrissy’s daughter, born last year and named Katharine in my honor, is deaf—undeniably grown-up problems for two girls who were once in too big a hurry to grow up.