Read Running from the Devil Online

Running from the Devil 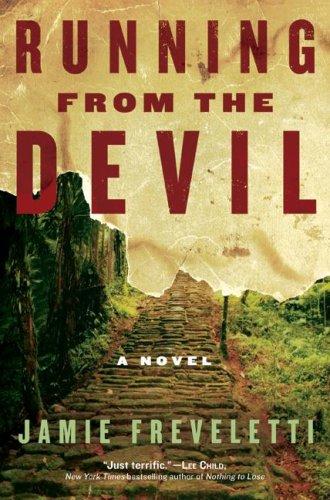 Tags:
Suspense & Thrillers
SUMMARY:
A race against evil . . . Emma Caldridge, a chemist for a cosmetics company, is en route from Miami to BogotA when her plane is hijacked and spins out of control into the mountains near the Venezuelan border. Thrown unhurt from the wreckage, she can do nothing but watch as guerrillas take the other passengers hostage. An endurance marathon runner, Emma silently trails the guerrillas and their captives, using her athletic prowess and scientific knowledge to stay alive. Those skills become essential when she discovers an injured passenger, secret government agent Cameron Sumner, separated from the group. Together they follow the hostages, staying one step ahead by staying one step behind. Meanwhile, as news of the hijacking breaks in Washington, the Department of Defense turns to Edward Banner, former military officer and current CEO of a security consulting firm, for help. Banner quickly sends a special task force to the crash site, intent on locating the survivors before it's too late. But finding Emma and Sumner is only the beginning, as Banner starts to realize that Emma was on a personal mission when the plane went down. There is more to the beautiful, talented biochemist than anyone ever imagined, for in her possession is a volatile biological weapon in an ingenious disguise, one that her enemies have set for auction to the highest bidder. Combining the action-packed plotting of Lee Child and Daniel Silva, and the rich scientific detail of Kathy Reichs and Tess Gerritsen, "Running from the Devil" is a breathtaking debut from a bold and daring new author.

EMMA CALDRIDGE WENT TO SLEEP IN FIRST CLASS ON A BRITISH Airlines flight from Miami to Bogotá, and woke sixty seconds before the plane was downed in the Colombian jungle.

It was the middle of the week in early August, and the half-empty plane contained business travelers, a few tourists, and Emma. A chemist and endurance racer, Emma was on a mission to reclaim her life. Dying in a plane crash would be a cruel twist of fate, but only one of the many cruel twists she’d endured this year.

She listened as the pilot’s voice came over the intercom, warning them that the airstrip he’d been ordered to use was too small for the jet and asking the passengers to assume crash position. Emma pulled her backpack out from under the seat in front of her and curled over it.

The plane pointed downward at an angle so extreme that Emma slid forward in her seat. The walls vibrated as the jet picked up speed. The engines whined while the plane tilted from side to side, as if the pilot and the copilot were in a battle for the controls. The other passengers started screaming.

The cabin depressurized and the temperature dropped so fast that ice formed on the windows right before Emma’s eyes. She tried to breathe, but her lungs felt like they were collapsing from the inside. The screaming passengers went silent, as if they no longer had enough breath to shriek. The ceiling opened up and the air masks dropped down, swaying on their rubber tubes. Emma snatched at her mask, yanking it once before sucking greedily into the yellow cup.

They hit the ground with a huge bang, still catapulting forward. The lights went out, plunging them into darkness. Only the tiny row of exit lights running along the floor remained on, illuminating their path to nowhere. Emma’s seat pulled away from the floor and she flew into the black.

EDWARD BANNER STOOD IN THE COMMUNICATIONS CENTER OF the United States Southern Command in Miami and watched as a breathless CNN correspondent broke the news about Flight 689 to the world. Carol Stromeyer, his company’s vice president, stood next to him.

“Did you brief CNN?” Banner said.

“I left that to the State Department. They’re trying to control the information flow.”

“Do we have a manifest?”

“British Airlines is faxing it now.”

“Was a marshal on board?”

Banner pulled a hand through his salt-and-pepper hair. His blue suit fit to perfection, and his tie formed a faultless knot at the neck of his custom-made shirt. Former military and current CEO of Darkview, a company that provided special forces personnel under contract to the Department of Defense, Banner brooked no wrinkles, slackers, or untidy Windsor knots. Despite his current age of forty-five, he could still shoot a rifle with deadly aim, dispatch an assailant with a well-placed kick, and outdrive the best of them behind the wheel of an armored Mercedes. Only he knew that his contact lenses were bifocals, his right hand sometimes shook from a bullet-wound injury he’d sustained fifteen years ago, and his left rotator cuff throbbed every time it rained.

“Any idea how this happened?”

Stromeyer sighed. “None. The pilot’s last communication was a routine check with the control tower. After that, silence.”

“Then why do we think it was hijacked?”

“It was a flight to Bogotá, but it turned long before and headed to the mountains.”

“Any chance that the instruments failed and sent the pilot off course?”

“Did it veer toward Venezuela?”

Stromeyer shook her head. “Don’t know. The hijacker turned off the tracking transponder. It could be anywhere.”

“Has anyone contacted the Colombian government?”

“Everyone has contacted the Colombian government. They claim to know nothing more than we do.”

“They’re lying. A jet that size doesn’t change its flight plan unannounced without someone noticing something. At the very least, land-based radar would paint the jet as it flew by.”

“They think it was downed in the northwestern mountains, near the Venezuelan border.”

“And the drug cartels.”

“And way too close to Venezuela,” Banner said.

Stromeyer nodded. “Intelligence is trying to determine if anyone from that country had a hand in the incident. If they did, the press will go into a frenzy. It’ll take their focus off the Middle East.”

“What time do we brief the president?”

“In ten minutes,” Stromeyer said. “I’ll check for the fax and meet you there.”

Banner watched her leave. At forty, Carol Stromeyer was one of the best officers he’d ever met. She was as well trained as he in the fighting arts, but had never employed her skills in the field. She’d spent her early years in the administrative and noncombat roles routinely relegated to women in the army. She’d risen through the ranks by virtue of her almost uncanny ability to find any piece of information within five minutes, and her detailed knowledge of all things, and forms, bureaucratic. If a new unit needed commissioning, money needed assigning, or a whole army brigade needed moving, Stromeyer knew who to contact to get it done and what forms to file in triplicate to grease the wheels. When Banner left the special forces to start Darkview, she was the first person he’d recruited.

Banner figured she’d have the manifest in three minutes and detailed information on every passenger listed in under twenty-four hours.

He grabbed a notepad from his desk and headed to the meeting.

EMMA LANDED ON HER BACK IN SOME BUSHES, STILL STRAPPED into the seat. Her arms flung outward, and the backpack flew off her lap. An explosion ripped through the air, sending a wave of heat washing over her. She struggled to remove her seat belt, rolled off the seat, and staggered to her feet.

What she saw was Dante’s Inferno.

Emma stood to the right of the wreckage. The plane’s nose and what was left of the first-and business-class cabins lay in front of her about one hundred yards. The remaining debris sat farther back and at a forty-five-degree angle to the makeshift runway, with a gaping hole where the plane had ripped in half.

People swarmed at the hole in the fore section. The lucky ones jumped to the ground. The unlucky ones fell when they were pushed from behind by the stampeding passengers.

The people from the aft section of the plane were not as fortunate, because the rear of the plane was on fire. Heavy black smoke poured from the twisted metal. The passengers jumped from this section of the plane as well, but some were already burning. They dropped and rolled, but as they did the flames increased. The ruptured fuel tanks sprayed fuel everywhere, and the people were rolling in it and reigniting themselves Several trees caught fire. Emma watched as the spewing fuel leaped out to meet them. When the fuel reached the burning trees, they exploded, sending a huge fireball into the air. The force kicked Emma’s feet from under her and threw her several feet. Her back hit a tree and she slid down it. Her legs didn’t seem to work. She slumped at the base of the tree and watched the carnage. Huge tongues of fire shot straight upward, turning the sky an orange-red color.

A large group of men, all armed and dressed in fatigues, stood at the beginning of the runway next to the plane’s tail. Their faces glowed red and black in the eerie blaze of the fires. The men watched in fascination as the passengers jumped from the airplane. They roared with laughter each time a passenger rolled and caught on fire. Light flickered off the bottles of liquor they passed from man to man.

Hell comes complete with its own army, Emma thought.

The lead soldier barked an order, and the soldiers fanned out. They walked toward the plane, collecting any surviving passengers as they did.

Emma tried to stand, but the world spun around her. She dropped to the ground and crawled away from the landing strip. When she reached her backpack, she grabbed the strap and dragged it with her. Her fingers clutched at the earth as she pulled herself forward. She gasped for breath and shivered in what she supposed was some sort of shock reaction. She couldn’t control the shaking. The blood from a cut on her head had congealed into a sticky mass from her temple to her jaw. When she moved, the mess cracked, like dried mud. Her head pounded with an unholy sharp, stabbing pain. She stole a quick glance behind her. The men in fatigues were busy collecting the survivors. They didn’t look Emma’s way.

She focused on reaching the safety of the tree line. Once there, she scrambled into the forest and collapsed behind a fat bush. She rifled through her backpack, looking for her cell phone. She found it, flipped it open, and waited while it searched for service. After a minute, the screen displayed NO SERVICE. She felt blind panic rise in her, swamping her. She willed herself to calm.

The Merger Mogul by Donna Every
The Alabaster Staff by Edward Bolme
Bet on a Mistletoe by Yvette Hines
From the Chrysalis by Karen E. Black
La esfinge de los hielos by Julio Verne
Charger the Soldier by Lea Tassie
The Waters Rising by Sheri S. Tepper
The Crown by Nancy Bilyeau
Goddess in Time by Tera Lynn Childs
Chimes of Passion by Joe Mudak