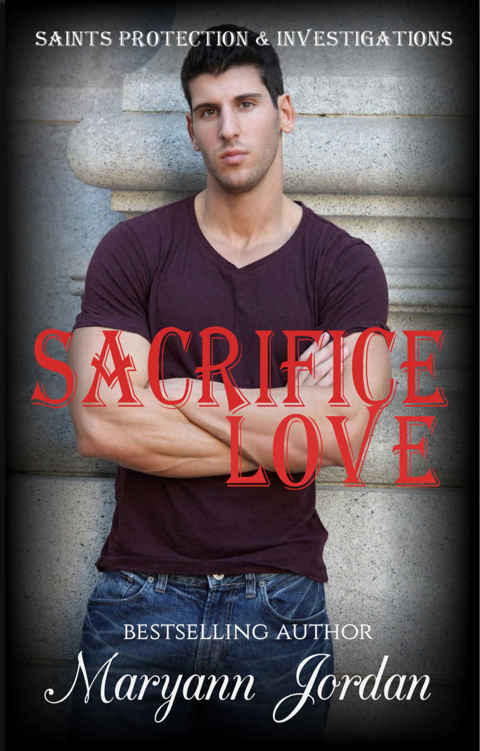 All rights reserved. No part of this book may be reproduced or transmitted in any form or by any means, electronic or mechanical, including photocopying, recording, or by any information storage and retrieval system without the written permission of the author, except where permitted by law.

If you are reading this book and did not purchase it, then you are reading an illegal pirated copy. If you would be concerned about working for no pay, then please respect the author’s work! Make sure that you are only reading a copy that has been officially released by the author.

To my family and friends, who have been my staunchest supporters. To my husband, who never once looked askance at me when I told him that I wanted to publish. And now, seventeen books later…I thank them for believing in me!

Other books by Maryann Jordan

First and foremost, I have to thank my husband, Michael. Always believing in me and wanting me to pursue my dreams, this book would not be possible without his support. To my daughters, MaryBeth and Nicole, I taught you to follow your dreams and now it is time for me to take my own advice. You two are my inspiration. Also, special thanks goes to my daughter, MaryBeth, who is a veterinarian and gave technical assistance to the story.

My best friend, Tammie, who for twenty years has been with me through thick and thin. You’ve filled the role of confidant, supporter, and sister.

My dear friend, Myckel Anne, who keeps me on track, keeps me grounded, and most of all – keeps my secrets. Thank you for not only being my proofreader, but my friend.

Going from blogger to author has allowed me to have the friendship and advice of several wonderful authors who always answered my questions, helped me over rough spots, and cheered me on. To Kristine Raymond, you gave me the green light when I wondered if I was crazy and you never let me give up. MJ Nightingale and Andrea Michelle – you two have made a huge impact on my life. EJ Shorthall, Victoria Brock, Jen Andrews, Andrea Long, A.d. Ellis, ML Steinbrunn, Sandee Love, thank you from the bottom of my heart.

My beta readers kept me sane, cheered me on, found all my silly errors, and often helped me understand my characters through their eyes.

Shannon Brandee Eversoll as my editor and Myckel Anne Phillips as my proofreader gave their time and talents to making Love’s Taming as well written as it can be.

My street team, Jordan’s Jewells, you all are amazing! You volunteer your time to promote my books and I cannot thank you enough! I hope you will stay with me, because I have lots more stories inside, just waiting to be written!

My Personal Assistant Barbara Martoncik and Business Assistant Myckel Anne Philliips, are the two women keep me going when I feel overwhelmed and I am so grateful for not only their assistance, but their friendship.

Andrea Michelle of Artistry in Design has now created all of my covers and she is amazing at taking my vision and creating a reality. Eric McKinney, my photographer and his wonder models, grace my covers.

Most importantly, thank you readers. You allow me into your home for a few hours as you disappear into my characters and you support me as I follow my indie author dreams.

T
he blue sky
peeked occasionally between the pillowy, white clouds as the large group gathered around the casket at the cemetery. Chad Fornelli stoically said his last goodbye to his longtime friend and former ATF bomb squad team member.
Fuck, Adam, what the hell happened?

The minister stepped up to the head of the casket and looked out on the gathering. He spoke of Adam, regaling them with his heroics, as well as his antics. Adam was known for both, and no one understood that better than his ATF buddies. The minister nodded toward Adam’s mother and stepdad, sitting in the front, pain etched upon their faces, calling Adam a dutiful and loving son. Adam’s mother leaned heavily on her husband, her hands clasped in his. Chad knew Adam’s biological father walked out on the family when Adam was young so he was raised by his mother alone. Several years ago, she found love again and Chad remembered Adam speaking respectfully of his mother’s husband. He remembered they were older, but they appeared much more so at the side of their son’s coffin.

The minister then turned toward Danielle, Adam’s wife.
Dani.
Chad sat next to her, his large hand clasping her much smaller one. He glanced to the side, taking in her profile. Her wavy auburn hair was tamed into a sleek ponytail at the base of her neck instead of flowing wildly down her back. Dark circles underneath her green eyes accentuated her pale face. The slightest smattering of freckles across her nose drew his gaze. A dash of lipstick gave the only color to her features. She held a tissue in her free hand, but she appeared to have no tears left. Her eyes, slightly puffy, were dry.

That even though she married my best friend…she was the only woman I’ve ever loved.

The mourners gathered
at the local pub, closed to the public, for the wake. The crowd was subdued at first but became lively after a few beers were consumed, all knowing this was what Adam would have wanted. Chad held his beer, toying with the sweat droplets sliding down the sides. Smiling at friends, listening as they shared their stories and memories of Adam, his eyes continually searched for Dani. She spent time with her and Adam’s parents until they left to go back to their hotel. Now, even with her friends circling around, she still appeared as a lost waif in the middle of a crowd.

She lifted her eyes to his and the familiar punch to the gut hit him. Those eyes…
I wanted to look into those eyes every day for the rest of my life.

She shifted her gaze to one of the women sitting next to her and Chad turned back to the bar. Seeing his reflection in the mirror behind the bartender, he allowed his mind to slip back in time once again…to the first time he saw her.

I loved the ATF picnics. We’d gather at a local park, mingling around food-laden tables, playing volleyball in the sand pit, and enjoying the brilliant summer day. For the Explosives Enforcement Officers, it gave us a chance to blow off steam while enjoying the company of other ATF agents from different local offices.

Jerking off my ATF t-shirt, I tossed it to the ground before jogging over to enter the volleyball game. I towered over many of the other guys with my height, but my agility surprised them. Laughing as I dove for a low ball, I collided with one of my best friends.

“Fuck, man,” Adam Turner growled, pushing me off him. “Jesus, you’re like running into a goddamn freight train.”

I stuck my hand out and Adam took it, allowing me to give him a pull to his feet. We grinned at each other, dusting off the sand before continuing the game. Twenty minutes later, we walked toward the food tables, the game successfully won by our team.

Slapping me on the back, Adam said, “Well, look who’s at the table. If it’s not the hottest ATF investigator in the office.”

My eyes swept across the tables and landed on the object of Adam’s proclamation. He’s not wrong…Dani is the prettiest—

“I swear I gotta tap that.”

“Come on, Adam, show some respect,” I growled, uncharacteristically irritated with my friend. “Not every woman is the kind to try to fuck over.”

Throwing his hand over his heart, Adam pretended to be wounded. “I don’t fuck ’em over, bro. I just fuck ’em…and they always want to come back for more.”

“You’re impossible, man,” I accused, my eyes still on the beautiful redhead. “She’s too damn good for you.”

Hoping she would not fall for Adam’s cheesy pick-up lines, I walked over, keeping my gaze on her and watched her eyes shift between me and Adam. The three of us had met at an ATF training a few months ago, but I had no idea if she would remember me. It seemed she did. She turned her brilliant smile, complete with dimples, and green eyes toward me…and I was a goner.

Over the next couple of months, we three forged a bond, spending many weekends drinking beer, watching bad movies, and eating pizza. Dani resisted Adam’s advances—it didn’t take her long to realize his womanizing ways. And after evenings of drinking, when Adam left to find his next ass to tap, she and I would sit and talk. But I never made a move…fear of losing their friendship always won out.

One night, the three of us were sitting in Adam’s apartment and I looked up as Dani brought the re-filled chip and dip bowls back in. Setting them on the coffee table, she stepped over Adam’s feet and situated herself between us. Closer to me. Adam’s eyes were glued to the football game. Dani’s eyes were facing the TV but I noticed she would glance my way often. I was always hyper-aware of her. Where she was, what she was doing, what she wore…everything.

“Damn quarterback,” Adam grumbled, standing up. “I’m losing money on this shit.” He walked out of the room, shouting about taking a piss before I heard the bathroom door slam.

Alone, my awareness of Dani skyrocketed. The way her hair, pulled up in a messy bun, had tendrils falling about her face. The way her white tank top showed off her tan, as well as her breasts. Her jeans cupping her ass and how when she leaned forward to dip her chips, her heart-shaped ass looked even more amazing. Her pink painted toenails peeking out from the bottom of her jeans. Everything snagged and held my attention.

As she leaned back, she twisted her head to gaze at me. Smiling, she shoulder-bumped me as she pressed her body into mine. “Hey, big guy. You’re kind of quiet. Whatcha thinking?”

I wanted to say, “That I think about you all the time. That I’ve decided that for me, you’re it. You’re the one.” Gazing into her eyes, I believed she wanted me to say those words. Her wide green eyes pierced mine as her tongue darted out over her bottom lip, wetting its dryness. Leaning in, my mouth a whisper away from hers, I held her gaze, looking for any indication that she did not want this as much as me, and all I saw was acceptance…and desire. My lips barely brushed hers—

“That was one fuckin’ long piss,” came the loud voice of Adam as he walked out of the bathroom.

Dani and I jumped apart, our eyes darting around nervously. She shoved a chip into her mouth and I leaned back heavily on the sofa, hating the missed opportunity. But the almost-kiss was close and she wanted it, I was sure.

My phone vibrated in my pocket and looking down to see who was calling, I recognized the number. Stepping out on the balcony to take the call in private, I re-entered the apartment a few minutes later, trying to mask my frustration.

Adam’s eyes were once more glued to the game, but Dani’s sharp expression was pointed at me. Shaking my head, I offered a smile, but knew it didn’t reach my eyes.