Read Shame on Him Online 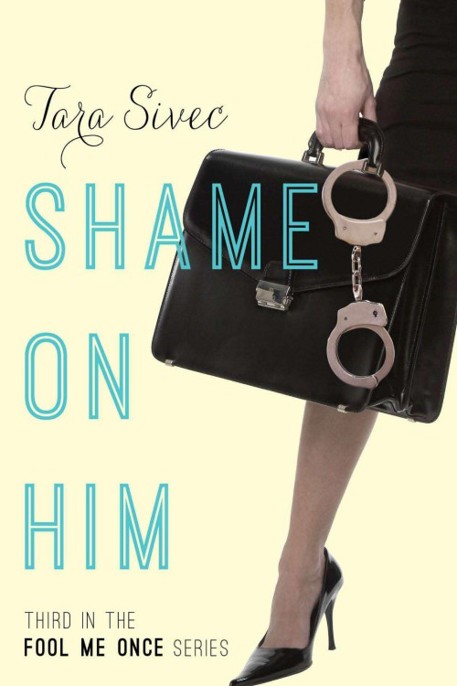 Fool Me Once Series

Amazon, the Amazon logo, and Montlake Romance are trademarks of
Amazon.com
, Inc., or its affiliates.

To every woman who has ever been a fool for love. With some handcuffs and booze, you too will find your Prince Charming . . . and kick a little ass along the way.

The vibration of my cell phone forces the device to bounce across the wooden table in front of me. I pause for a moment to glance at the screen and see that it’s Paige calling. She knows I’m in court. She also knows I’m not to be interrupted unless someone is dying. With everything that has happened lately—drug lords trying to kill Kennedy, the mob going after Paige—my heart skips a beat.

While opposing counsel is busy stating his case to the court and the judge is looking away, I quickly grab my phone, hunch down in my seat, and bring it to my ear.

“Paige, what’s wrong? Is Kennedy okay?” I whisper as softly as I can.

I hear giggling on the other end of the line and then a squeal.

“Paige!” I whisper again, glancing up at Judge Robertson to make sure he’s still occupied with the defense.

Another burst of laughter comes through the phone and then Paige finally speaks. “Matt, seriously, that tickles!”

“Lorelei! Oh, my gosh, I’m sorry! I totally forgot. I was just calling to remind you that you need to pick up the subpoena today and deliver it to Richard Covington.”

“Counselor, are we interrupting something?”

My head whips up and I jerk the phone away from my ear when Judge Robertson bellows across the courtroom at me.

“I’m sorry, Your Honor. There was an emergency with my mother,” I lie. Quickly ending the call, I place my phone back on the table.

I realize my mistake as soon as his angry expression turns to one of concern.

“If you need to take a recess, Counselor, speak up now.”

How did it completely slip my mind that Judge Robertson knows my parents? My father plays golf with Judge Robertson once a week. I don’t make mistakes like this. Ever. The only explanation for my carelessness is that there’s been a lot going on. My brain is being forced into a hundred different directions.

“It’s fine, Your Honor. We can proceed.”

While the defense continues with their arguments, I jot myself a note at the top of my yellow legal pad to pick up the subpoena and to let my father know that if Judge Robertson asks how mother is, he should just go along with it.

The likeliness of that happening is zero to none, though. My father is an Indiana Supreme Court judge and my mother teaches advanced criminal law at Notre Dame. They have no tolerance for frivolity and would never understand if I told them I was interrupted in court by a phone call from one of my friends.

The sound of my cell phone bouncing across the table again forces me out of my depressing thoughts.

I swear to God I’m going to kill Paige.

With a quick smack of my hand on top of it, I silence the noise. I glance nervously up at Judge Robertson to see if he heard it. Luckily, he’s called the defense up to his bench and they are deep in conversation.

“Paige, I swear, someone better be dead.” I give an apologetic smile to my client seated next to me.

My eyes widen in horror and I quickly end the call.

Did she really just call me while she was having sex?

This time, I remember to power my cell phone down and shove it quickly into my purse on the floor. No wonder I’m so distracted. I’ve had to deal with my two best friends falling in love right in front of my eyes after we all swore off men for the rest of our lives.

My parents don’t know this yet, but I’m part owner of the company we opened together—Fool Me Once Investigations. It was the first time in my life I was actually excited about something. I’ve been putting off sharing this news with them for months. Since my sham of a marriage to Doug ended, I’ve felt lost. Felt as if I’m floundering around from day to day trying to figure out my life and what makes me happy. Doug certainly found his happiness—with another man.

Maybe that’s why I’ve been slow to inform my parents. Once they know what I’ve been doing in my spare time, it will no longer be all mine. The choices I’ve made and the work I’ve been doing for Fool Me Once will be theirs to pick apart and criticize.

The remainder of the preliminary hearing goes off without a hitch. Judge Robertson decides that there is no probable cause for the complaint against my client and, thankfully, we won’t be going to trial.

Rushing out of the courtroom, I pull my cell phone out of my purse, power it back up, and call Paige.

She answers on the first ring. “Please don’t kill me. I’m so sorry for calling you during court. I swear it won’t happen again.”

I sigh as I pull my rolling leather briefcase behind me and push through the double doors at the front of the courthouse, exiting into the sunshine.

“I’d rather you apologize for calling me when you and Matt were having sex,” I deadpan.

Paige gasps in surprise and then starts laughing. “Oh, my God! I butt dialed you!”

She continues laughing and I can hear Matt laughing along with her through the line.

“Tell Matt he owes me a bottle of bleach to pour into my ears.”

Paige and Matt met a month ago when one of Paige’s cases for Fool Me Once required her to catch him cheating. She quickly found out he wasn’t a cheater and that his ex was trying to take his father’s company away from him in the divorce proceedings.

I’m happy for them, I really am. Just because I’m finished with love doesn’t mean I can’t celebrate when my best friends find it again.

“I picked up the subpoena for Richard Covington from the court administrator and I’m heading over to his place now,” I tell her as I unlock my Mercedes, lower the handle of my bag, and lift it into the passenger seat.

We were hired by another law firm to deliver the subpoena to Richard. Since I’m the one who works at the courthouse, it was a given that I’d be in charge of this job.

“All right, good luck with that. I’ve seen pictures of him in
Forbes
. That man is hot as hell. Don’t fall victim to his good looks and charm,” Paige teases.

Like that would ever happen. First of all, Richard Covington is still technically married. That’s not something I would go near with a ten-foot pole. I’ve been married to a cheater who liked men. I’m not about to fall for a straight cheater in the middle of a vicious divorce battle. His ex is trying to take Mr. Wandering-Eye Moneybags for all he’s got.

There isn’t a man alive right now worth giving up my independence for.

“I’m pretty sure I’ll be able to resist him, Paige,” I tell her with a roll of my eyes as I start up my car. “This subpoena is asking him to turn over all records of his Internet usage. Men like him are too cocky to ever delete their Internet history.”

“I bet he’s got some kinky fetishes too. Oh, to be a fly on the wall when the divorce lawyers go through his computer,” she says with a sigh.

“Seriously, Paige? You were just telling me how good-looking he was like you thought I should make a go for him. It’s nice to know you have my best interests at heart,” I say.

“Hey, kinky fetishes can be fun. Unless he’s into barnyard animals.”

I try not to gag at that mental image. “That’s disgusting.”

“You never know. It could just be some fun S&M or three-way action. He’s hot enough for you to forgive a little proclivity like that,” Paige tells me with a laugh.

“I’m hanging up now, Paige. This conversation has officially made its descent right into the gutter.”

“Can I help it if I want you to find someone and be happy like I am?” she asks.

“I’m perfectly happy on my own. I told you that.”

“Whatever helps you sleep at night, Lorelei. One of these days you’re going to find a man who will change everything,” she warns.

I sigh and wish she could see me shaking my head at her. “I already met the man who did that. He’s now getting married to a waiter from my favorite Italian restaurant.”

Even if I wanted to take a chance again, it’s not like I have the time. My caseload for the firm is reaching epic proportions and I’ve been trying to handle more things at Fool Me Once so Kennedy and Paige can have more free time with the men in their lives.

“I’m not giving up on you, Lorelei. There’s hope for you yet. Call me when you’re finished with the subpoena. Matt has a meeting and Kennedy mentioned something about us going out for drinks to discuss a few new cases that came in.”

I end the call with a promise to call her back and toss my cell phone onto the passenger seat. I could use a girls’ night out. I’m having dinner with my parents next weekend and I need some advice from my friends on whether or not it’s time to come clean with them about Fool Me Once.

Thankfully, all that’s involved with this subpoena is knocking on Richard Covington’s door, having him verbally confirm his identity, and then handing over the document. I should be on my way to meet Kennedy and Paige within the hour.

T
wenty minutes later I pull into Breakwater Village, the gated community in the city of Granger, where Richard Covington lives. After I give my information to the guard at the gate, he takes down my license plate number and waves me through.

Due to my parents’ careers, I grew up in a home that some might call a mansion among some of the wealthiest people in Indiana. Every weekend we attended one function or another at country clubs or the lavish homes of these friends. And with my law career, I’m used to being around people of wealth and stature and spending evenings in their large homes. But even I’m a little bit in shock as I pull into Richard Covington’s circular driveway.

The house looming in front of me is a beautiful English manor situated on a large wooded lot with professionally landscaped shrubbery and flower gardens. Though it’s large, it doesn’t quite block the lake and boat dock behind it. I get out of my car and smooth my hands down the front of my Chanel suit, checking my reflection in the car window to make sure my shoulder-length straight brown hair is still in order.