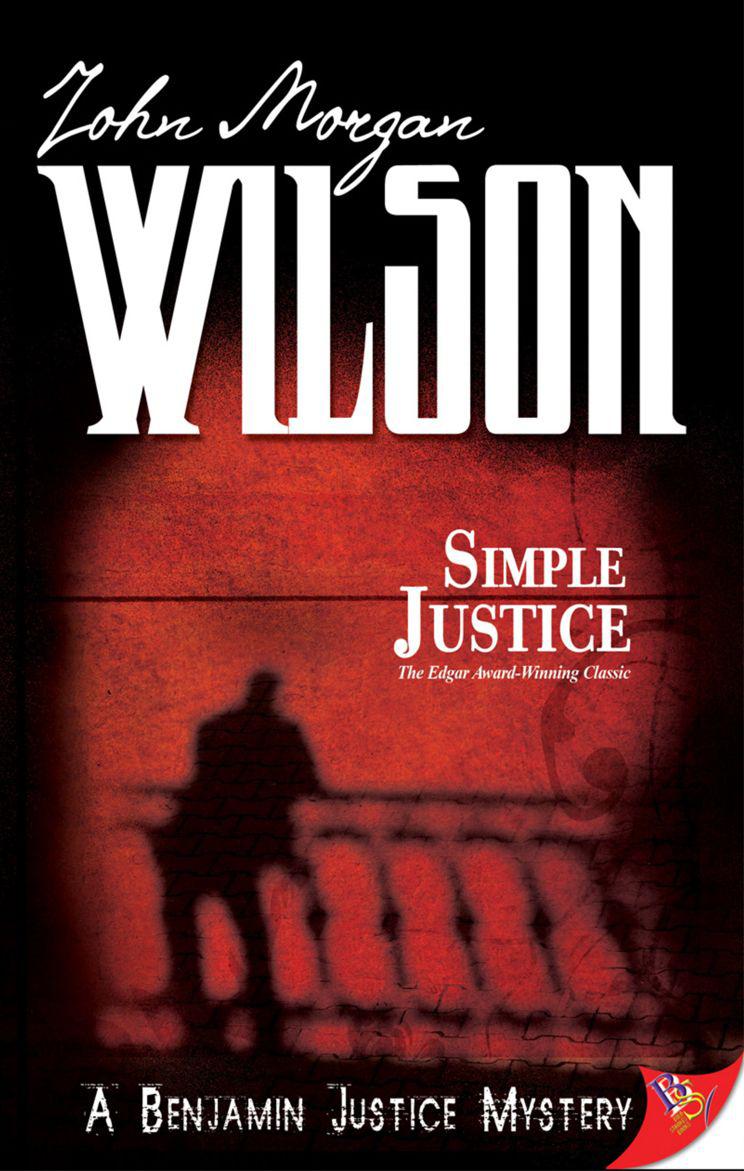 When a pretty-boy cokehead is murdered outside a gay bar in a working class district of Los Angeles, and a young Latino quickly confesses to the crime, it appears the case is closed. Benjamin Justice, a disgraced former reporter with the
Los Angeles Times
, is lured out of his alcoholic seclusion to look more deeply into the murder. But why would a teenager confess to a brutal gang initiation killing he didn’t commit? Only Benjamin Justice understands, but with his credibility shattered, no one’s listening. As Justice threads his way through a colorful gallery of suspects, he’s thrust back into the world of gay bars and haunting memories that he’s tried to put behind him since the death of his lover from AIDS six years earlier, an event that precipitated the Pulitzer scandal that destroyed his promising career. With Justice teetering on an emotional brink, his reluctant new partner,
Los Angeles Sun
reporter Alexandra Templeton, must solve the riddle of Justice’s own dark past to save him. Together, with her deadline looming, they confront the real killer, using every bit of journalistic skill they can muster to pin that person to the crime.
Reprint. 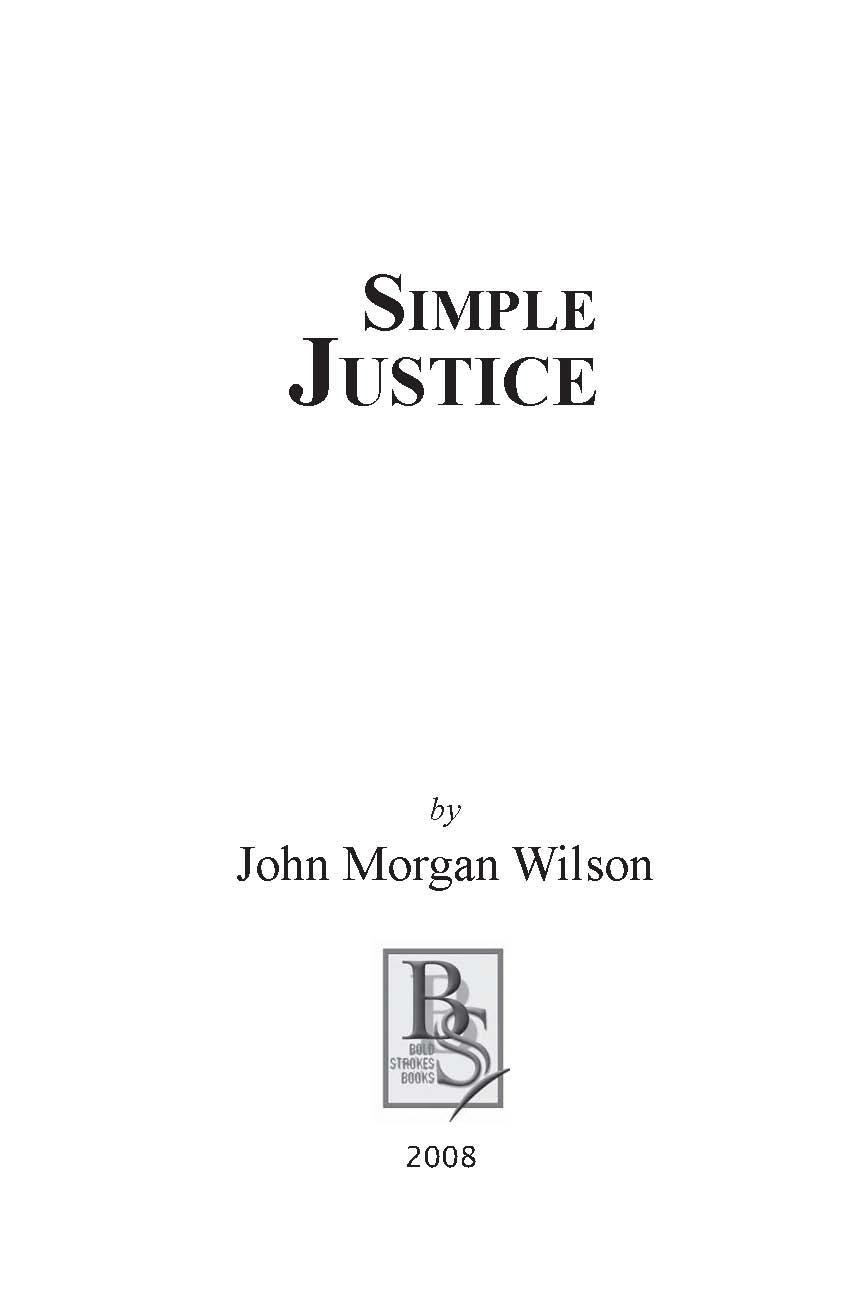 Billy Lusk was murdered on a Tuesday, shortly after midnight, and Harry Brofsky came looking for me that afternoon.

It was mid-July. Hot winds that felt like the devil’s breath blew into Los Angeles from the desert, rattling through the shaggy eucalyptus trees like a dry cough.

The city was golden, blinding, blasted by heavenly light. It was one of those days that made nipples rise and minds wander and bodies shiver with sensuality and inexplicable dread. The kind of day when the heat wrapped snugly around you but sent an ominous chill up your back at the same time, like the first sexual touch in a dark room from a beautiful stranger whose name you’d never know.

Harry found me in West Hollywood, bobbing my head to an old Coltrane tape and trying not to think about alcohol.

I was staying in a small garage apartment in a leafy neighborhood known for its irregular shape as the Norma Triangle, where quaint little houses crowded cozy lots and lush greenery crawled unrestricted over the rotting corpses of old wood fences.

My single room was up a wooden stairway at the deep end of an unpaved driveway, which ran alongside a neatly kept California Craftsman, one of those finely beveled, wood-framed bungalows that sprouted up by the thousands during the building boom of the 1930s and 1940s. The owners, Maurice and Fred, had purchased the property in the late fifties, when West Hollywood was a quiet community of middle-class families and well-behaved bohemians on the eastern edge of upscale Beverly Hills, and Maurice and Fred had been in the early stages of their four-decade relationship.

Thanks to their kindness, I was staying in the apartment rent-free, in exchange for performing odd chores. It wasn’t the most dignified arrangement for a thirty-eight-year-old ex-journalist who had been awarded a Pulitzer prize. But not quite six years ago, in winning that coveted award, I’d destroyed any personal dignity I might claim, not to mention my career, in one dark and reckless act of fraud, so where and how I lived didn’t matter all that much.

Nothing really did now, except somehow getting through another day, until all the days were mercifully used up.

Through the unwashed window of my room, I looked down on the rear yard, where a flowering jacaranda swayed like a lonely dancer in the restless breeze. Three plump cats lounged in the tree’s shade, their tails barely twitching in the oppressive heat, watching a hummingbird dart among syrupy pistils of honeysuckle while I watched them.

In the three months since Maurice and Fred had installed me in the apartment, I’d spent most of my time at this window, where I could see down the narrow driveway to the street without anyone clearly seeing me. When Harry finally showed up, unannounced, I felt as though I’d spent most of those hours waiting for him.

I watched him wrestle his Ford Escort into a space at the curb and struggle wearily out. He mopped his round face with a handkerchief, found a cigarette, and adjusted his bifocals to check a scrap of paper for the Norma Place address. When he’d confirmed the numbers, he glanced up at the apartment, just long enough for me to see what the years had done to him, and to feel the gnaw of guilt.

I briefly wondered how he’d found me after all this time. Then I remembered that Harry had once been a reporter too, and a good reporter knows how to find people who don’t want to be found.

“Oh, Harry.” I listened to Coltrane blow the final jumpy notes of “My Favorite Things,” the fourteen-minute version, then heard the machine click off. “I do so wish you’d left well enough alone.”

As he crossed Norma, passing a trim young man with a gym bag and a perfect tan, Harry could not have looked more out of place.

Although West Hollywood as a whole was predominantly heterosexual, with a sizable population of older residents and Russian Jewish immigrants, the makeup in this neighborhood was distinctly different. The Norma Triangle was situated only a couple of blocks off Santa Monica Boulevard near the section of West Hollywood known as Boy’s Town, where gay businesses proliferated and single male adults were presumed homosexual until proven otherwise.

Harry was thoroughly heterosexual, and looked it in a dull, stereotypical way. Close to sixty, he was dressed in a musty-looking blue-gray suit appropriate for the funeral of someone you don’t really care about; he had the rumpled, unfashionable look of a transplanted Midwest newspaper editor, which he was. His brown loafers needed polishing, his gray mustache needed trimming, and so did his waistline, all of which marked him as a man who didn’t care much about his appearance. And if there was a single obsession in Boy’s Town, other than the endless search for a new sexual conquest, it was the constant cultivation of one’s physical image, a kind of fraternity row mind-set pumped up with gay flair.

With my thinning blond hair and ex-wrestler’s body going paunchy and slack, and a fashion sense that ran to old jeans and sweatshirts, I didn’t fit in too neatly myself. But there was still some muscle on my six-foot frame, and my blue eyes remained alert to the sight of an attractive face or body, marginal indications in Boy’s Town that I might be a practicing homosexual. Harry, on the other hand, looked like anybody’s heterosexual uncle from anywhere that wasn’t too exciting.

I listened to his hacking smoker’s cough as he climbed the stairs. He’d always had trouble with hot weather, and by the time he reached the top, oily sweat pebbled his forehead, and his pale face was blotchy. It was the first time I’d seen or spoken to Harry Brofsky in five years.

“You can’t afford a phone?” he asked, squinting at me through the screen. “Things are that bad?”

For a moment, I considered asking him to leave.

Jacques had lived in this apartment when I’d first met him ten years ago. He’d been waiting tables and writing poetry and I’d been a hotshot young reporter at the
L.A. Times
. Jacques had stayed through the years until the virus got him and he became too sick to take care of himself, moving into my apartment the last months of his life, in his twenty-ninth year. After he’d died, Maurice and Fred had never rented the place again. They’d loved Jacques like a son, and I think they missed him nearly as much as I did.

I could feel his presence in the room, fragile and fading with time like my memories of him, and I didn’t want intruders.

“I have to stand out here like a salesman?”

I felt the guilt again, flushing through me like a sickness coming on. I opened the screen door and stepped aside to let him pass.

Harry took a final, nervous drag on his cigarette, crushed it underfoot on the landing, and shuffled in. His sad gray eyes, bright and mischievous not all that many years ago, surveyed the small room.

He saw an unmade bed, an ancient dresser piled with books, a small TV set with rabbit ears, a few dozen jazz tapes scattered beside Jacques’s old stereo. Sitting on a shelf were two framed photographs: one of Jacques I’d taken a year before he died, when his large brown eyes were clear and deceptively healthy and his narrow, boyish face was rosy and brown, full of sun, full of hope; another of my sister Elizabeth Jane, snapped at her eleventh birthday party, smiling for the camera with a sadness I’d been too blind to see. There was also a framed one-sheet from
East of Eden
hanging on a wall, signed by James Dean; it was a memento from Maurice’s youthful days with the Sal Mineo crowd that Jacques had liked for some reason, so I left it up. Not much else.

“Where the hell have you been?”

“Living in the backseat of the Mustang. Trying to drink myself to death.”

Harry had never had much time for self-pity.

“I guess you fucked that up too,” he said.

I could have told him more: that Maurice and Fred had rescued me from the backseat of my old Mustang convertible, just as they’d once rescued Jacques as a troubled teenager from the streets. That they’d moved me into the apartment and shamed me into pulling myself halfway together, telling me that I owed Jacques at least that much after he’d fought so hard for so long to hang on, before slipping away from us.

He perched himself on the only chair in the room and asked for a glass of water.

Then he told me about the murder of Billy Lusk.

Defiant by Kennedy, Kris
Patch Up by Witter, Stephanie
Pearl on Cherry by Chanse Lowell
The Last Boleyn by Karen Harper
Michael Chabon by The Mysteries of Pittsburgh
The Proof is in the Pudding by Melinda Wells
Nothing Ever Dies: Vietnam and the Memory of War by Viet Thanh Nguyen
Boy's Best Friend by Kate Banks
Master (Book 5) by Robert J. Crane
A Vision of Murder by Price McNaughton