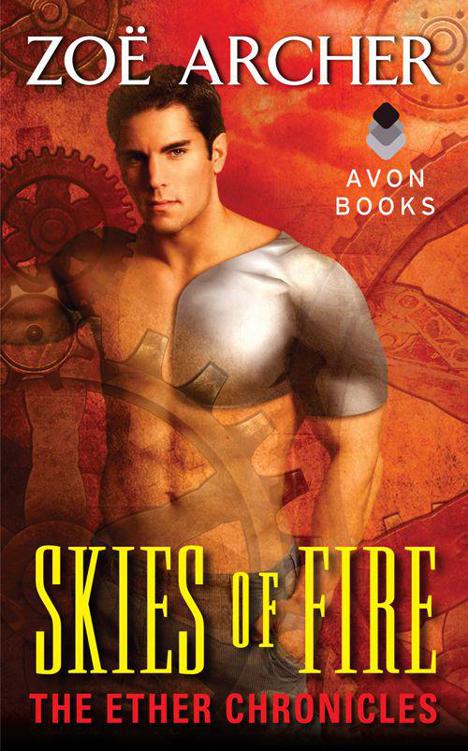 To Zack, who makes every day a wonderful adventure.

The skies above the Carpathian Mountains.

T
HE DECK OF the airship
HMS Demeter
rocked from the force of another concussive blast. The hull took no damage, but the crew lurched like drunkards as they fought to keep the ship steady. A direct hit to the engines from the enemy’s ether cannons would send the
Demeter
plunging down over a mile to the jagged mountains below.

He was loud enough for the crew to hear. Dawes, the helmsman, turned the wheel, and the ship banked sharply to the right, narrowly missing another blast from the Hapsburgs’ ether cannon.

Through his goggles, Christopher stared at the enemy ships. Bad odds. Five-to-three in favor of the Huns, and one of the Hapsburg dirigibles was a dreadnought, carrying thrice as many guns. The corvette class
Demeter
was tiny by comparison, only as long as two railway carriages.

A convoy of Russian and British seafaring vessels had been attacked by a Hapsburg airship as they’d traveled across the Black Sea. The
Demeter
and two other British airships were there to respond and had flown to the aid of the convoy. Fighting among the vessels had ranged all the way into enemy territory. Over the Carpathian Mountains, four more Hapsburg dirigibles had joined the fight, resulting in this disastrous battle.

No British reinforcements would fly in to lend support. All he and the other British captains could do was fight, and hope they made it out alive.

Which might not happen. The
Danae
and
Psyche
were taking heavy hits, and, faintly over the boom of gunfire and roar of the wind, Christopher heard the airships’ captains bellowing orders to their crews.

“Which means we have to do the same,” Christopher said. “Damn it.” He hated retreating. The Man O’ War part of him rebelled at the thought alone. He battled to keep down his impulse to fight—a continual struggle, since the telumium implants that had made him into a Man O’ War fed his already strong aggression. Retreat was counterintuitive to men such as he, men who had been transformed into amalgams of flesh and metal.

But sometimes retreat was the only option. Strategy took precedence over gallantry.

The middle of a disastrous battle was no time to think of her, of the curve of her neck or the way she picked her morning rolls apart before eating them in discrete bites. A cunning strategist, his Louisa.

She’s not mine any longer. She made her choice.

“Prepare for withdrawal!” he yelled. Right now, he had to get his ship and crew to safety. Perhaps if he survived, he might allow himself a conciliatory dram of whiskey in his quarters, permitting a rare foray into regret and self-pity. A good deal of gunpowder and ether lay between now and then, however.

Turning to issue another command, he paused for a moment, catching a faint whine—a sound undetectable to the normal ear. He threw himself to the deck, taking Pullman down with him. Both men looked up to see a bullet hole in the bulkhead just behind them.

“You’d been any slower,” Pullman breathed, “that bullet would’ve drilled right through your head and mine.”

Another reason to thank the telumium implants. The rare metal stimulated his adrenal glands, making him stronger and faster than an ordinary man, and sharpened his senses. He could see the rivets on an airship half a mile away and hear a bullet seconds before it made impact.

The implants also made him a target. If he was killed, his airship would lose its most important source of power—him. The metal plates that were fused with his flesh powered the batteries that ran the engines, a reaction which created the ether that kept the ship aloft. Snipers armed with ether rifles always accompanied airships into combat, counting on the fact that a Man O’ War captain was impelled to stand above deck and put himself in the heat of battle. Christopher knew two captains who had been taken out by snipers.

Damned ungentlemanly, the use of snipers. Ten years ago, no naval force would have ever considered such ill-mannered tactics during combat. But ten years ago, the Man O’ Wars didn’t exist. Warfare, and tactics, had changed since then.

Grabbing his own ether rifle from its mounted scabbard on the ship’s central support, Christopher took up position at the rail. He sighted the would-be assassin on the deck of a Hapsburg ship, his enhanced vision bringing the enemy into perfect clarity. After drawing a steadying breath, Christopher fired. Moments later, the sniper dropped.

“They’re all good shots, Mr. Pullman.” Christopher jammed the rifle back into its holster.

Christopher cursed when he saw three of the five Hapsburg ships position themselves between him and the retreating British airships. If he wanted to join his comrades in their withdrawal from the battle, he’d have to get through the Huns. Including their massive dreadnought, with its superior firepower. Trying to break through their line would see him and his ship blown out of the sky.

His alternate route didn’t look much better. Two Hapsburg ships advanced from the other side, a high rocky ridge behind them. But these airships were smaller frigates. There just might be a chance . . .

“Bring her about, Mr. Pullman,” he ordered. “Until we’re facing those two enemy ships. And prepare to vent the ether tanks.”

After giving Christopher an answering grin, Pullman shouted the order to the venters, who made the necessary adjustments to the large tanks at the back of the ship. They signaled their readiness, and Pullman yelled, “Make ready for venting!” He repeated his command into the shipboard auditory device so the crew below would know to prepare themselves.

Like the other members of the crew, Christopher braced himself, taking a bit of rope from a capstan and wrapping it around his hand. He secured his footing.

The wooden-hulled airship turned, placing her side to the three enemy ships as she was aimed toward two more Hapsburg ships. It was a risky stance to be in, but the
Demeter
had to be positioned for her flight.

He had to time this just right. At any moment, they could be fired upon.

A few seconds more, and then—

The venters threw the levers. Three things happened simultaneously. The
Demeter
dropped lower, a fast plunge of twenty feet. Enemy ships fired, blasting the area where his ship had just been. And the ship rocketed forward, pushed faster by the rearward release of ether from the tanks. Christopher was grateful for his goggles, as brittle wind scoured his face. That had been one of the first adjustments: speed. Even at its slowest, an airship was damned faster than any seafaring vessel, including a clipper. He allowed himself a smile. There was something deeply thrilling about racing through the sky with the velocity and view of a god.

The forest below became a green blur, smeared with gray from rocky outcroppings.

Gravitational force shoved at him as the
Demeter
sped forward, but he kept himself from falling, his legs wide-braced, his grip secure on the rope.

The ship raced forward, right toward the two Hapsburg frigates. Between the two enemy craft was a distance of barely a hundred feet, making for a tight squeeze. If the
Demeter
cleared the narrow space, it would be a feat worthy of a dance-hall ballad.

Though Dawes had turned chalk-white, his eyes wide behind his goggles, he did as he was ordered, keeping the
Demeter
on course. Some of the crewmen on deck crossed themselves, and a few took out lockets that held photographs of wives and children.

Christopher had no locket with a sweetheart’s photograph. As a member of Naval Intelligence, Louisa had been protective of her image, not wanting any record of her face that could possibly fall into enemy hands. When she left him, all that had remained behind were memories and anger. And one kidskin glove. She had a habit of misplacing gloves.

As the
Demeter
sped toward the enemy ships, the spiky mountains just beyond them, Christopher wondered if Louisa would learn about his death in the papers. No—she abjured newspapers.

If there’s information I need to know,
she had said one afternoon over tea,
I’ll ferret it out.

Do you know what I’m thinking right now?
he had asked.

She had smiled, her slow, wicked smile.
I’m a very good spy. And I do enjoy a thorough interrogation.

An extremely pleasant afternoon had followed. More than a few long, lonely nights patrolling the air had been spent in contemplation of that afternoon. Anger had always been quick to follow his memories. He couldn’t think of the times they’d shared without recalling the way it had ended. The empty bed when he’d awakened. No letter, not even a note. She was just . . . gone.

One way or the other, if he didn’t survive, she would know. Was it petty of him to hope she’d be saddened by the news? He was a Man O’ War—not inhuman.

The ship gained speed, getting closer and closer to the two Hapsburg frigates. Christopher could see the astounded enemy crewmen scurrying across the decks, and the captains—Man O’ Wars like him—bellowing orders. They were making the guns ready to fire on the
Demeter.

The gunners acknowledged the order, and, fighting the force of the speeding ship, readied the cannons. They all stared at him, waiting for the command.

He waited, too. Everything needed to be timed perfectly. Closer. Closer. The
Demeter
was almost between the enemy ships.

Guns from both sides boomed. The
Demeter
shuddered as some of the enemy fire slammed into the hull, but the ship held strong. The enemy ships also took hits, and Christopher noted with satisfaction that several of their ether tanks and guns were damaged.

Lacey and Lethal by Laurann Dohner
Caroselli's Baby Chase by Michelle Celmer
Storming the Kingdom by Jeff Dixon
Church of the Dog by Kaya McLaren
The Foundation: Jack Emery 1 by Steve P. Vincent
Chasing Gold: The Incredible Story of How the Nazis Stole Europe's Bullion by George M. Taber
Taming a Sea Horse by Robert B. Parker
Trapped by Rose Francis
A Political Affair by Mary Whitney
Honore de Balzac by An Historical Mystery_The Gondreville Mystery