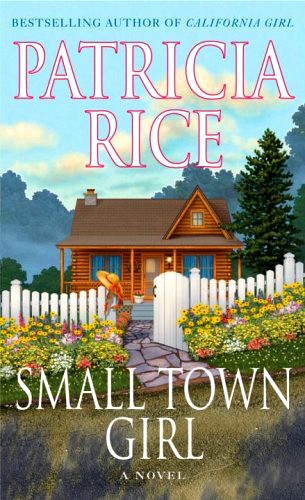 Praise for the novels of

"
Carolina Girl
is full of the warmth, humor and poignancy that make Rice's books very special."

"Brilliant and riveting, edgy and funny."

"Patricia Rice shows her diverse talent as a writer in
Impossible Dreams
… [It] will leave readers with a smile on their faces."

Small Town Girl
is a work of fiction. Names, characters, places, and incidents are the products of the author's imagination or are used fictitiously. Any resemblance to actual events, locales, or persons, living or dead, is entirely coincidental.

Ivy Books and colophon are trademarks of Random House, Inc.

To Robin and Linda, who gave me a chance to write this book, sight unseen. To say I'm thrilled with your trust would be an understatement of cataclysmic proportions.

And to Charlotte! Your patience in the face of authorial nervous breakdowns is deeply appreciated.

His badass days were over
. Flynn Clinton rubbed his whisker stubble with his damaged left hand and gazed over the dance floor of lithe, gyrating bodies. He might be bad, but he sure the hell wasn't young enough to make an ass of himself anymore.

The thick smoke of the bar seared his eyes and throat. He'd forgotten that North Carolina was tobacco country. Smoke never used to bother him. Hell, he wouldn't have noticed a bomb exploding when he had music pounding through him. Like a narcotic, music had blinded him. Withdrawal hurt, but he could see clearly now. Music was as addictive as cigarettes, more lethal than narcotics.

He was here because he didn't know a better place to start searching for the writer who'd scribbled that unforgettable rhyme on the envelope he carried in his back pocket. He was just about positive the scrawl didn't belong to his two-timing partner. He had to know the depth of the crook's dishonesty, even if it set his gut on fire thinking about it.

But he didn't know how to be a detective, which was why he was fretting over losing his
sexy
instead of taking care of business.

Surreptitiously, Flint brushed his hand over his hair to reassure himself that it hadn't receded farther. He even had friggin' gray threading through the chocolate brown the ladies had once run their hands through.

At least months of working out his frustration in a gym had kept him wiry, even if he hadn't been able to punch bags while wearing the cast. Maybe he'd grow a paunch to prove he was a staid old man. Then his kids would really laugh at him.

He winced, remembering the painful scene at his parents' house earlier today. He supposed he deserved every bit of their castigation. His sons had totally ignored him while his parents had laid out the ground rules for getting the boys back into his life.

Basically, if he wanted his sons to come home, he had to change his ways.

He definitely wanted his sons back. He remembered each of their births with shocking exactitude, the awe and responsibility and love that had welled up in him the first time he'd held those tiny lives in his wicked hands. He'd made promises then that he hadn't kept too well.

Looked like fate had caught up with him, and he had no choice except to grow up and start keeping those promises. Flint turned his back on the stage and the bright lights and signaled the bartender.

Once upon a time he would have been in the center of that crowd of hot bodies performing mating rituals to the music of a rocking band. He would have had a beer bottle in hand and been howling along with the songs as he two-stepped with the best-looking lady in the bar.

He took a long pull on the cold beer the bartender set in front of him. Dirk was an old friend who'd known him back in the days, but like any good friend, Dirk had the good sense to keep his tongue in his head.

"How's Betty Sue?" Flint asked to open the conversation. It wasn't as if he were here to have fun. Dirk's bar was a place to start searching for answers. Flint fully expected the answers to be painful, but shouldering responsibility was part of his new maturity.

He had a feeling he wasn't going to like adulthood.

"Betty went back to school and sells real estate now. Hardly ever see her." Dirk dried a wineglass and set it on the rack. "What are you doing back in these parts?"

Flint wasn't much inclined to share his troubles, so he shrugged and took another swig. Tomorrow, he was moving to a dry town to become the staid owner of a coffee shop, if he could pry the hooks of his old life out of his hide. "Got tired of the city lights, I guess. I've got two boys to raise, and I want them to grow up with a simpler life."

Dirk snorted. "I think they're building snowmen in hell these days. Tell me another one. Did the rebel finally find a cause?"

Flint contemplated the possibility for all of a second before shaking his head. "It's complicated. Melinda dying sudden like that tore the kids to pieces. Even at their age, they understand alcohol and driving don't mix. The counselor says they're feeling rejected as well as grieving."

Another reason why they thought he was a major asshole. He didn't blame them. He'd never had a problem with alcohol until the divorce. According to his mother, his drunken accident on top of Melinda's had robbed the boys of all security.

Currently, the kids liked it right where they werewith their yuppie grandparents who provided a fancy house with a big rec room, video games, and soccer. In addition, his parents provided a stable home that didn't include two screaming semi-adults who used to spend most of their time anywhere but with their offspring.

That was going to change. He couldn't bring back Melinda, may she rest in peace, if peace was what she wanted. And he wasn't about to bring back the open lifestyle they'd shared. This time, he was taking a different route. Somewhere in this wide world had to be the maternal sort of woman who would provide the nurturing his kids needed. He'd woke up and smelled the coffee, so to speak.

While Dirk made sympathetic noises about Melinda's death, Flint turned to gaze over the tables of couples laughing and talking while he looked for a way to broach the subject fretting at his mind. "You've got a good crowd."

"Asheville is booming," Dirk agreed. "We do pretty well on weekends with the tourists. It's a little slower the rest of the week."

Mint nodded as if he understood. He'd learn soon enough. Even a bonehead like him could figure out why business was better on weekends. Maybe he could figure out how to do something about it. He'd need more cash than weekends could bring in if he meant to give his kids the same lifestyle that his parents provided.

"I remember playing here back when. Betty Sue used to wait tables then, didn't she?"

"Yup, but she had highfalutin ideas of how a bar should be run, and I wasn't adding no ferns to keep her happy. It's been easier since she quit to have the kids."

"Amen to that, brother. Women don't understand that a man needs a place where everything stays the same so he feels comfortable. You can't fill a bar with frilly girl things." Flint sure intended to keep his shop just the way it was, a place a man could read a newspaper and drink his coffee in peace. He had fond memories of his dad taking him and his brothers there for fat muffins on Sunday mornings. That's what he wanted for his boys.

Flint stopped from reaching for his beer as a frilly girl thing caught his eye. "Although I sure don't mind admiring the women ornamenting a place."

Dirk chuckled. "You haven't changed all that much after all. I swear, I never saw a woman in here besides Betty Sue until you started playing."

"I was never much of a player," Flint protested, but he was talking guitar, and he knew Dirk was talking women. He'd learned a lot since those days. Women messed with his head. He didn't particularly like them anymore except in his bed, and it had been a scary long time since he'd seen one there. But for his boys, he was willing to look around again for someone a little more suitable than their mother, some quiet, mousy woman who would love them and leave his head alone. Melinda had taught him that wild women don't make good parents.

That didn't mean he couldn't howl a little tonight, especially if he could howl with that blond number flirting those long, fake lashes at him. He leaned his elbows back on the bar and enjoyed the view. "You got a film crew in town that's bringing in starlets?" he inquired, winking at the blonde but not making his move yet.

"Not hardly. It's the usual lot out there far as I can see, mostly locals at this hour. It'll pick up later. Who you eyeballing?"

"The blond, bronze bombshell with the big gold earrings."

"Ah, you've got good taste," Dirk responded with an inflection that passed right over Flint's head and out the door.

He was too busy studying the scenery. His engines were revved and roaring as she leaned forward to say something to one of her girlfriends—giving him a full view of her most excellent cleavage. She wore a big gold heart that dangled right between her breasts. Over this past grim year, he'd forgotten how much he enjoyed this part of the game, the teasing and being teased.

He ought to be too old for this. With his hand aching like it was decrepit, he'd been feeling too old for it just five minutes ago. Irritating how one flirtatious look from a pretty young thing and an instant hard-on could turn him into a randy chowderhead.

He turned back to the bar. "Bring me another, and hit me if I look again."

"He's checking you out, girl. Quit pretending you don't notice."

Joella Sanderson sipped her daiquiri and pretended not to notice. "I'm not doing men anymore, remember."

"Even tall, dark, and yummy? Give me a break. If you don't want him, can I have him? I swear, I need ice just looking at him. That man is
hot
." Dot fanned herself with her hand and continued to stare in the direction of the bar.

"You can still
do
men and not get involved," Rita said seriously. "You can't give up sex entirely."

Rita had a point there. Joella stole a surreptitious glance at the bar. Tall, dark, and dangerous had turned his back on her. That got under her skin a little. He'd got her all hot and bothered for nothing? If he thought she would come on to him, he needed to find another girl to play games with.