Read Song of My Heart Online

Song of My Heart 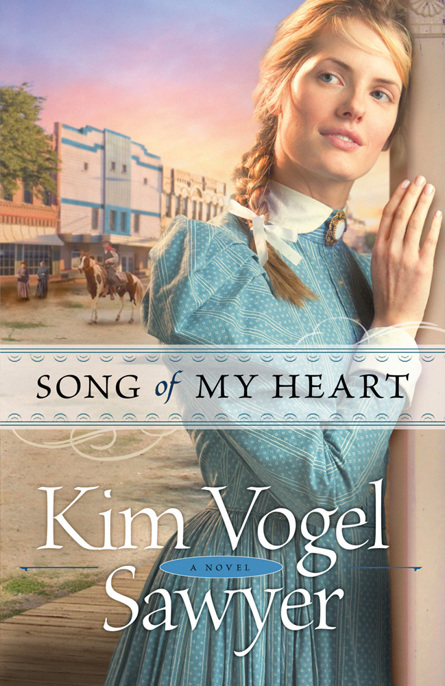 All rights reserved. No part of this publication may be reproduced, stored in a retrieval system, or transmitted in any form or by any means—electronic, mechanical, photocopying, recording, or otherwise—without the prior written permission of the publisher. The only exception is brief quotations in published reviews.

May your songs always proclaim

the faithfulness of the Lord.

“I will sing of the mercies of the Lord for ever:

with my mouth will I make known thy

faithfulness to all generations.”

S
adie Wagner let out a squeal of delight. A tufted titmouse shot from the budding bush nearby with an indignant flutter of gray-feathered wings. On an ordinary afternoon, Sadie would regret frightening away a bird that offered such an enchanting melody, but today she was too excited to pause for regret. Gathering her tattered calico skirts in one hand, she clutched the letter from her cousin Sid in the other and dashed for the house.

Bursting through the door, left open to allow in the sweet breath of spring, she cried, “Mama! Mama!”

Her younger sister, Effie, turned from the dry sink, a dripping cloth in her hand. Her brown eyes widened in concern. “What is it, Sadie?”

Sadie waved the letter. “Good news! Come!” Catching Effie’s wet hand, she tugged her sister through the doorway to Mama and Papa’s small bedroom. Their feet beat a staccato rhythm on the pine floorboards, matching the rapid tempo of Sadie’s pulse. She released Effie and fell on her knees beside Papa’s bed. As always, the sight of his drawn, pain-riddled face raised an ache in the center of her chest. But surely the opportunity presented in the letter would ease some of Papa’s burden.

Mama, seated on a chair beside Papa’s bed with a half-empty bowl of potato-and-onion soup in her hands, sent Sadie a troubled look. The lines of worry etched into Mama’s brow had aged her. She set the bowl aside and touched Sadie’s heaving shoulder. “Goodness, child, why are you in such a dither?”

A gleeful giggle spilled from Sadie’s throat. She held out the letter, showing it to both of her parents. “Look! From Sid. Remember he promised to write once he got settled in Kansas? He’s there now . . . all settled in . . . and—” She paused to catch her breath. The dash across the yard had winded her more than she’d realized.

Effie danced in place, wringing her hands. “What does he say, Sadie?”

“He says there is a job for me in Goldtree!”

Mama’s jaw dropped. Papa sucked in a sharp breath. Effie clapped both hands over her mouth and stared at Sadie with shocked eyes.

Sadie’s confused gaze bounced from one family member to another. Why did they appear distraught rather than elated? Didn’t they—like she—see Sid’s letter as an answer to their prayers? For weeks they’d been asking God to provide a job for Sadie. She waited for someone to say something, but they sat in stunned silence.

Sadie released a huff of frustration. “Didn’t you hear what I said? A job!” She flipped the letter around and smiled at her cousin’s scribbled text. “As a clerk in Baxters’ Mercantile. For”—she squinted, trying to decipher Sid’s penmanship—“sisters Melva and Shelva Baxter.” She smiled at her mother. “
Honest
work, Mama.” Unlike the only jobs available in Dalton. “With a fair wage.”

Mama still didn’t respond, so Sadie turned her attention to Papa. “Sid says the owners wanted to employ a young woman since they are woman proprietors. They’ll provide me with a room and meals in addition to a monthly salary, so I’ll be able to send nearly every penny back to you.” She deliberately avoided mentioning the other part of Sid’s letter—the part that made her heart twist in eager desire. Pointing it out could seem selfish. “God answered my prayers, don’t you see?”
All of them . . .

Tears flooded Mama’s eyes. She blinked them away and reached for the letter. “But in Kansas, Sadie? It’s so far away.”

In her excitement, Sadie hadn’t considered the distance. Her elation faltered. But then she squared her shoulders. “It won’t be forever. Only until Papa recovers from the accident and can work again.” No matter what the doctor said, Papa
would
get better someday. She took Mama’s hand and spoke softly, soothingly, the way she’d comfort one of her little brothers if he awakened from a bad dream. “There’s nothing here in Dalton, Mama. And somebody has to work. . . .”

Mama worried her lower lip between her teeth. Sympathy swelled in Sadie’s breast. Mama wanted so much to take care of everyone—Papa, the children, the house. She knew Mama wanted to be the one to meet the needs of their large family. But cleaning houses—the only decent job available for a woman her age—couldn’t bring in enough money. If both Mama and Sadie could do housecleaning, then perhaps there’d be enough, but someone had to see to Papa and the younger children. This job in Kansas would solve all their problems, if only Mama and Papa would let her go.

Papa cleared his throat. He lifted a thin, vein-lined hand and plucked the letter from Mama’s lap. “Sadie-girl, you and Effie leave your mama an’ me alone. We need to talk this out.”

Sadie started to ask to be included in the discussion, but Papa’s brown eyes, faded from their weeks of pain and worry, begged her not to argue. She wouldn’t grieve the dear man. With a nod, she pushed to her feet. “Of course, Papa.” She gave his grizzled cheek a kiss, took up the discarded bowl and spoon, and ushered Effie back to the front room of the house.

“Close the door,” Mama called after them.

Effie clicked it closed, then whirled on Sadie. “Whaddaya think they’ll say? Will they let you go, do you think?” Her whisper quavered with excitement.

Sadie moved to the dry sink and resumed the task Effie had abandoned. The wash water had turned cool during their time away, but only a few dishes remained. She chose not to waste their precious coal supply to heat more water. Scrubbing hard at Papa’s bowl, she replied, “I don’t see how they can refuse. Somebody has to provide for the family, and as the oldest, it makes sense for me to be the one.”

Effie’s lips formed a pout. “I could help, too, y’know. I’m thirteen already.”

“You won’t be thirteen for four more months,” Sadie said, “and you’re still a schoolgirl.”

“But summer’s comin’.” Effie tossed her head, making her brown braids flop. “Only two more weeks, an’ I’ll be home all day. Least I could help during the summer.”

“Just what kind of job do you think you’d find?” Sadie hadn’t meant to snap, but she couldn’t encourage Effie to consider taking a job. Her sister wanted to grow up too fast. Childhood was precious—Effie shouldn’t wish it away. Sadie softened her tone. “Besides, you’ll have a job. Mama will need you here to help with the boys.”

Effie sighed and scuffed to Sadie’s side. She picked up a length of toweling, but instead of drying dishes she swished the bleached cloth against her skirt. “I get tired of doing housework an’ chasing our brothers.” Effie’s tone picked up a hint of defiance. “Sometimes I can’t wait ’til I’m all grown up an’ I can just do what I want to ’stead of cooking an’ cleaning an’ tending the boys.”

Sadie raised one eyebrow. “I don’t know of any woman who just does as she pleases.” Sadie, at twenty-two, was considered a woman, but she still hadn’t found the freedom to do what she wanted most.

Effie tipped her head and sent Sadie a pensive look. “Do you really want to work in a mercantile?”

Sadie pinched her lips closed. If she were honest, working in a mercantile held little appeal. But after everything Papa had done for her—giving her a secure home, loving her as his own—she wouldn’t let him down now that he needed her. “It’s honest work. I don’t mind it.”

“If you were a boy,” Effie mused, “you could just work in the mines, like Papa did. Then you wouldn’t have to go away.”

“God didn’t make me a boy,” Sadie replied, pushing aside a brief pinch of regret. Papa loved her—she knew that without a doubt, even though she wasn’t a boy and wasn’t really his—but if she were a boy, she’d have endless job possibilities. Then she could provide for the family and relieve everyone’s worry.

She plopped the clean bowl into Effie’s hands. “Put that dish towel to work.” Reaching for the spoons, she added, “Anyway, you know Papa’s always said he wanted better than the mines for his children. He has dreams of college for Matt, Mark, Luke, and John. So even if I was a boy, he wouldn’t want me to—”

“Sadie?” Mama’s voice carried from behind the closed bedroom door.

Sadie gently disengaged Effie’s hold and then dried her hands on her apron. Her heart thudded hard against her ribs, both eager and apprehensive. “I guess I’ll find out.”

Effie gulped. She wadded the toweling in her hands. “Should I come, too?”

Sadie hid her smile. Effie hated to be left out of anything. “Mama only called for me.” She took Effie’s shoulder and turned her toward the front door. “Go check on the boys—see how much of that ground they’ve readied for Mama’s garden seeds.” If she knew her brothers, they’d done more playing than working, yet she couldn’t drum up even a smidgen of criticism. She adored the entire freckle-faced lot.

Sadie gave one of her sister’s dark braids a light tug. “If the folks want you, I’ll give a holler.” She waited until Effie skittered out the door, then hurried to her parents’ bedroom. Forcing herself to stay calm, she offered a quick prayer.
God, I want Your will most of all, so if they say no, let me accept it.
But even as the plea silently rose, she realized the depth of her longing to travel to Kansas. To take the job. And fulfill the dream that resided within her heart.

She opened the door and stepped in. Twining her fingers together, she searched her parents’ faces. Their burden-weary expressions offered no hint of what they had decided. Mama pointed silently to the foot of the bed, and Sadie quickly sat.

Tears immediately sprang into Sadie’s eyes at the sound of Papa’s weak, raspy voice so different from the boisterous, booming voice he’d had before the tunnel collapse that had nearly killed him.

The Red Collection by Portia Da Costa
Yom Kippur as Manifest in an Approaching Dorsal Fin by Adam Byrn Tritt
Sugar Daddies by Jade West
The Coyote Tracker by Larry D. Sweazy
Seducing the Doctor (At First Sight #4) by Janet Lane-Walters
Ability (Omnibus) by Hill, Travis
Lost and Found by Laura Dower
The Distant Marvels by Chantel Acevedo
Under A Velvet Cloak by Anthony, Piers
KissedByASEAL by Cat Johnson