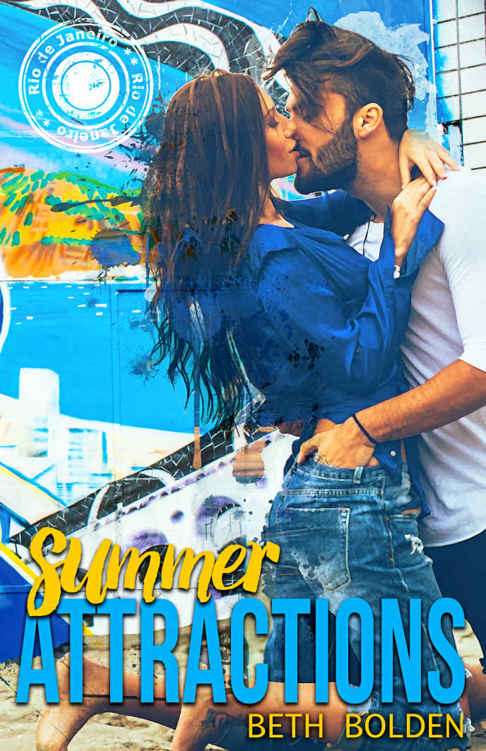 Jemma’s best friend once told her nothing good ever happens after 2 AM.

When her phone rang, blaring through that still, silent calm right before dawn, Jemma fumbled to answer it with equal measures of dread and adrenaline pulsing through her veins—and Colin’s words echoing menacingly in her head.

But the problem wasn’t even on the shortlist of fears she’d had only that brief moment to compile. It was her boss.

“He’s been taken to a hospital in Rio,” Duncan, the owner of
Five Points,
the sports and pop culture blog they both worked for, said. “Knife wound to the stomach. Stabilized but just barely.”

Jemma was barely awake but she was still full of questions, half-clipped phrases because she couldn’t quite finish any of them. “Did he—was he—is he going to be alright? What even happened?”

“From what I hear,” Duncan said wryly, an echoing exhaustion in his own voice, “he was being himself.”

Jemma got dressed in the dark, throwing on enough clothes to cover herself, not even stopping to consider anything else, and went to the office because that seemed like the most normal thing to do when your boss, who you weren’t even sure you liked, got himself stabbed in a foreign country while on assignment.

“Good, you’re here,” Duncan said absently as she walked in the conference room where everyone was gathered, smiles tight and eyes anxious.

Jemma didn’t mention that she didn’t remember a single block of her drive to the office. “I’m here,” she parroted uselessly, collapsing into a chair. The buzzing adrenaline in her veins keeping her if not exactly steady, then
awake
. The clock on the wall said it was 4:36 AM. “Can someone tell me what the hell is going on?”

A cacophony of answers spilled out across the gleaming wood of the conference table. Half the people in the room, Jemma was convinced, didn’t even know her name before this morning. She was only Nick Wheeler’s just-out-of-college intern. The one who wrote
that
article and got hired because of it. There hadn’t been much acknowledgement of her existence otherwise; half the time, Nick himself barely acknowledged her.

She held up a hand. It was too overwhelming and the reality of the situation was just beginning to leak through the numbness all the adrenaline had afforded her. “Just . . .no,” Jemma said. “One at a time, please.”

“Nick got stabbed in one of the
favelas
during a mugging,” Duncan said. “I guess because he wouldn’t hand his phone over. He’s still in surgery. Will be for a few more hours. Then when he’s stabilized, we’ll fly him back to LA.”

Only then it hit Jemma that Nick wouldn’t be covering the Olympics in Rio. How could he, from a hospital bed in Los Angeles?

“So, who’s going to Rio?” Jemma asked, and every pair of eyes around the table swiveled to her.

“But I . . .I don’t . . .” Jemma couldn’t say she didn’t write. She’d been
hired
to write. She was a bona fide journalist, complete with shiny new degree, even if she only did research and fact-checked for Nick. The issue was that she’d been working for him for almost a year and she still couldn’t figure out why he’d hired
her
.

Nick liked edgy stories; stories that sent hate email by the gigabyte to his inbox. Jemma considered herself adventurous, but she didn’t get some kind of weird adrenaline high by writing something guaranteed to piss people off.

And now she was supposed to go to Rio de Janiero and write
all
the Olympic coverage for
Five Points
, when Nick had shared exactly zero of his sources or his story ideas.

It was supposed to be hot. Steamy, even. Warm enough to melt the foundation and mascara right off her face. But as Jemma lifted her face to the painfully blue sky, she didn’t feel a drop of her drugstore foundation wilt under the sun’s rays. Being closer to the equator than LA, Jemma had just assumed it would be warmer than the city she’d come to call home, but as it turned out, Rio wasn’t anything like what she’d expected.

Not that there’d been time to consider very much. It had been a sleepless, packed day before her flight, everything tinged with an edge of hysteria.

She laughed now, a little of that hysteria breaking through, the sound dispersing into the wide blue sky.

Even with all the research on Rio as a city and Brazil as a country and all the obscure historical facts she’d been able dredge up about the Olympic Games, it turned out Jemma had never once looked up the weather.

It made sense; she’d been gathering her information under the assumption that when the Opening Ceremonies in Rio kicked off, she wouldn’t be sweltering under the Brazilian sun, she’d be sitting in the
Five Points’
office in LA, providing backup to Nick.

But as it happened, less than twenty-four hours later, Jemma was standing in the Rio airport, wondering why her makeup wasn’t actually melting off her face, and trying to figure out who, of the several dozen or so official looking drivers milling about on the sidewalk, was the one who was supposed to pick her up and drop her off at her hotel.

Neither of these possibilities had been ones that Jemma had considered. Of course, she’d been in such a frazzled rush to get packed that she hadn’t really had the opportunity to consider much of anything. But now in Rio, there was sudden clarity and a moment to
think
, and she was a little terrified.

After all, she’d been the one doing all the research on Rio’s crime rate, on the neighborhoods or
favelas
, that were not only
not
pacified, but were often run by either drug lords or local, rogue militias. The furthest Jemma had ever been from home had been a semester studying abroad in London, interning at one of the papers there, and while it had seemed quite adventurous at the time, nothing had seemed particularly foreign.

She’d at the very least spoken the right language.

For a moment, she considered dragging her phone out of the carry-on bag she had slung over one shoulder, but the articles she’d read about theft of electronics made her hesitate. She didn’t know what she’d do with it anyway—she couldn’t call Duncan because they’d arranged for her to use a cheap pre-paid phone in Rio and it was waiting for her at the hotel.

Jemma supposed she could always attempt to use the translation app she had downloaded, but she’d need Wi-Fi to do that. At the very least, she couldn’t continue to stand out here with no idea what to do, but she wasn’t sure going back inside would help either.

She was debating which option was worse when a very large tanned hand settled on her shoulder, jolting her out of her reverie.

Jemma whirled around to come face to face with a man that looked like he lifted weights for breakfast. And then ate girls like her for a snack afterwards.

He was dressed in dark jeans, and the gray t-shirt he wore did nothing to hide his rippling biceps. Jemma had a very uncomfortable vision of them flexing as they squeezed the life out of her. Dark, wavy hair, a tanned, chiseled face, a hawk of a nose, and intense dark eyes. His perfect poker face didn’t give a clue away as to what Jemma should expect.

He was hot. Eyebrow-singing hot, if Jemma was being honest, and when those serious eyes swung her direction, also heart-poundingly terrifying.

Jemma’s palms started to sweat despite Rio’s very moderate temperature. She waited a second, and then another, praying he wouldn’t mug her. All she knew was that no matter how much she adored her phone, she wasn’t about to get attacked for it. Unlike Nick, if asked, she was going to be
very
willing to hand it over.

But he didn’t say a word, merely stared at her with an inscrutable expression as if she was psychic and knew exactly what he wanted.

“Can I help you?” she finally bit out after a good thirty seconds of stare-off. Usually Jemma was more game for silent confrontation, but she just really wanted to know if he planned to rob her. She’d almost forgotten about how attractive he was—
almost.

“Jemma Keane?” was all he asked, in a non-accented voice. An American
voice. She nodded and he continued in the same blank, nearly robotic monotone, “I’m here to get you.”

“You’re here to drive me to the hotel? That’s great.” She had been hoping for a little more friendly Brazilian and a little less intimidating body-builder, but either one would get her where she needed to go; it just happened that the latter made her pulse race a bit faster, that’s all.