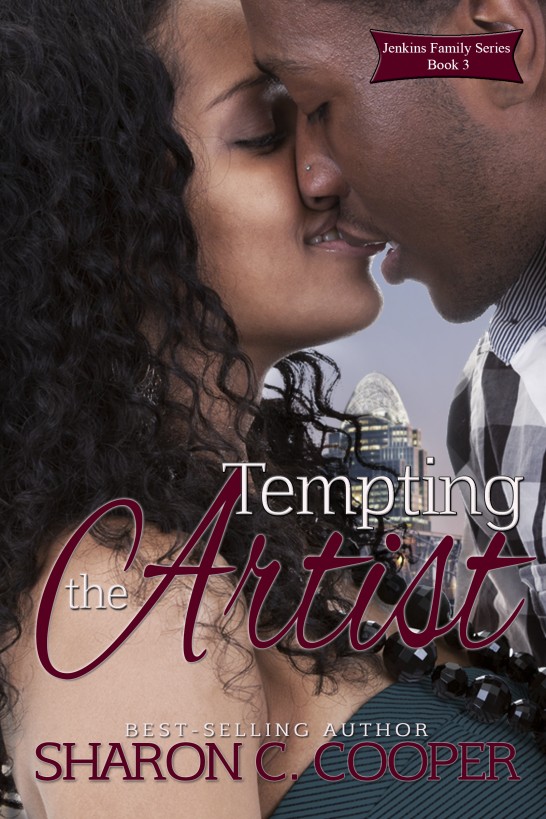 No part of this book may be used or
reproduced in any manner without written permission except in the
case of brief quotations embodied in critical articles and reviews.
For permission, contact the author at
www.sharoncooper.net

Published by: Amaris Publishing LLC in
the United States

This ebook is licensed for your
personal enjoyment only. This ebook may not be re-sold or given
away to other people. If you would like to share this book with
another person, please purchase an additional copy for each
recipient. If you’re reading this book and did not purchase it, or
it was not purchased for your use only, then please return to
Smashwords.com and purchase your own copy. Thank you for respecting
the hard work of this author.

This story is a work of fiction.
Names, characters, and incidents are either products of the
author's imagination or are used fictitiously. Any resemblance to
actual events, locales, organizations or persons, living or dead,
is entirely coincidental.

Tempting the
Artist
,
book 3 of
the Jenkins Family Series:

Christina “CJ” Jenkins, a
free-spirited painter by trade is juggling her obligation to the
family construction business, with the demands of her secret
passion. A secret life she has successfully hidden until recently.
When sexy, bad-boy attorney, Luke Hayden, enters the picture, he
steals her heart. But the truth of Christina’s double life buried
under lies, threatens to destroy them both.

Luke is leaving New York to escape the
drama, which is his life. Starting over in Cincinnati with
Christina appeals to him more than he will admit. Although her
secret jeopardizes their steamy affair, it’s not until someone
threatens to destroy the Jenkins family empire, and uses Luke to
carry out their plan, that their relationship is truly tested. Luke
will do what he can to help the Jenkins family, but he will stop at
nothing to tempt the woman who has captured his heart.

Christina Jenkins folded her lower lip
between her teeth, her hands on her hips as she paced in front of
the wall of windows that overlooked Central Park East. The landmark
view was of no use to her as she debated on what she should do
about Luke Hayden. The man had captured her heart, tempting her to
share a secret that she hadn’t even shared with her
family.

I need to tell
him.

I have to tell
him.

She released a quiet groan
and ran tense hands through a mass of curly hair. Frustration
lodged in her chest. Christina knew she could have handled this a
month ago. Instead, she
waited
until the last possible moment,
and now she was starting to get on her
own
nerves with
worry.

It was almost midnight.
Well past the time she should have been asleep since they had to
get up early in the morning. Well,
actually
she didn’t have to get
up. She wouldn’t be on the 8 a.m. flight to Cincinnati.

Leaning against the window
frame, she contemplated her next move.
What am I going to do?
At some point,
she would have to tell Luke she wasn’t traveling with him. He was
leaving the big city of dreams and relocating to her hometown of
Cincinnati.

Her gaze drifted to the
twinkling city lights and the skyscrapers that were too
close
together,
but made up the city she had fallen in love with.
Why would he leave all of this? Luke had told her that he’d had
enough of New York’s fast pace. She wasn’t buying it. No one left
New York City for Cincinnati, Ohio. Granted she liked living in
Cincinnati, but she loved the energy of The Big Apple.

Maybe he’s hiding
something
. That had to be it. Yet who was
she to question his
decision
or his secrets, especially when
she had a secret of her own.

She stepped away from the
spectacular
view
and leaned on the back of a white chaise lounge,
one of two pieces of furniture that hadn’t been picked up by the
movers. Luke had sold everything else except a few items remaining
in the living room and his bedroom set. The young couple, who
bought the apartment, had worked the remaining pieces into their
purchase offer.

Christina lowered her head and shut
her eyes. Everything would be all right. She was overthinking the
situation. Their relationship was tight and built on trust.
Besides, Luke was the sweetest man she had ever met, and he
wouldn’t have a problem with her change in plans. It wasn’t like
she wasn’t ever going back to Cincinnati. She was only staying in
New York another day, two tops.

Christina’s head jerked up startled at
the sound of Luke’s voice. Her heart pounded erratically in her
chest. She wasn’t sure if it was because of the conversation she
knew they had to have or because she hadn’t heard him enter the
room. After an amazing round of sex, she had left him sleeping in
the bedroom while she hung out in the living room weighing her
options.

Luke stepped out of the shadows of the
semi-dark room and into a small stream of moonlight shining through
one of the windows. After three months of dating, the sight of him
still made her heart stutter.

She had always been attracted to dark
skinned men, a stark contrast to her lighter skin. And this man was
the epitome of sexy. He stood before her in nothing but a pair of
striped pajama bottoms hanging low on his hips, his thick package
pressed behind the flimsy material. Her gaze moved up to his face.
An artist would be in heaven if they had him as a model. Sharp
accessing eyes, an average-size nose and a chiseled jaw line made
up his handsome face. And those lips. God, the things he could do
with those full, tempting lips.

Lust throbbed through Christina’s
veins as Luke watched her with the intensity of a hawk circling its
target calculating the perfect time to pounce. The dress shirt she
wore of his, with nothing underneath, did nothing to hide her erect
nipples from his heated gaze. All it took was a look from him, and
she was ready to let him have his way with her. Again.

“
Wha … what are you doing
up?” she finally asked.

“
I don’t sleep well without
you in my bed.” His slumber-filled voice was deep and intoxicating.
She had no doubt that he meant what he said. When she wasn’t in New
York visiting him, he rarely slept in the bed, preferring the sofa
in his home office. He’d often stay at work until nine or ten at
night, only to arrive home and work for another few hours. She had
no idea how he functioned with only three or four hours of sleep
each night.

Luke moved across the room with the
stealth of a lion, closing in on its prey. With a lean body, his
sculpted chest and muscular biceps stood out. That quiet control
swimming in his eyes, with a twinge of fearlessness, rooted her in
place and had her heart pounding double-time. She was sure that
look played well into him being one of the top defense attorneys at
his New York law firm.

“
What’s wrong? You’ve been
distracted since we returned from the art show.” The richness of
his baritone voice washed over her like a smooth, satiny caress.
And he smelled so good. The fresh scent of soap permeated the air
as if he had just stepped out of the shower. His voice, his scent,
and all that made him the man he was, weakened her defenses and
sent her senses spiraling out of control.

He pulled her effortlessly against his
hard body and her arms slid easily around his neck. What she felt
for him was unlike anything she had ever experienced. There was
just something about him. Something about the way his welcoming
embrace evoked a sense of peace that settled over her like a goose
down jacket all snuggly and warm. And there was something about the
way his self-assuredness gave her the desire to experience the
world through his eyes, making her want to try new things and live
life on the edge.

Christina moaned as his body molded
against hers, chest to chest and thigh to thigh. He felt too good.
It wasn’t helping that the feathery kisses he placed along the
length of her neck were reigniting the smoldering heat from hours
earlier. She couldn’t think straight. Couldn’t think straight when
he looked at her, or when he kissed her, or when he touched her. An
experienced lover, his caress had her body bending to his
will.

“
Maybe you should come back
to bed so that I can make you forget your troubles.”

“
Or maybe you can make me
forget my troubles right here … right now.”

“
That can be arranged.” She
leaned against the back of the chair as h
is
fingers quickly undid
the buttons on her
shirt. The expensive material slid off her shoulders and down her
arms. “You looked good in my shirt, but you’d look even better out
of it.” Luke tossed the garment to the side, letting it fall to the
floor.

Christina had always been
comfortable in the nude, and
watching
Luke’s appreciative
gaze travel down the length of her body made her glad she’d
only
worn
his shirt.

Nudging her legs apart, he
stepped between her thighs and a shiver of delight shot through her
when his
hand flattened over her breast.
With her arms behind her, she held on to the back of the chair for
support as he caressed, squeezed, and tweaked a taut nipple.
Holding her around her waist, he lowered his head, and his tongue
took over where his fingers left off. Lethal. That’s what she
considered his tongue to be. Her insides turned to mush when his
mouth made contact with her body.

She moaned when he paid her other
nipple the same homage as the first, gently taking it between his
teeth. His hands caressed the curve of her torso and worked their
way down to her hips. Heart pounding erratically, Christina
squirmed beneath him. Wanting more. Needing more. Savoring the way
his lower body ground against her nakedness.

His mouth returned to her
lips, and he kissed her with a hunger that radiated to the soles of
her feet. When
his large hands gripped her
bare butt cheeks, she wrapped her arms around his neck, pulling him
closer, his erection pressing against her stomach.
She gave herself completely to the passion of his
kiss. Her body was coming alive with every stroke of his tongue and
squeeze of his hand.

“
Damn, baby you feel good,”
he mumbled against her lips. “But I need to feel all of you.” His
right hand slid between their bodies, and he loosened the
drawstring of his pajamas.

Oh yes.
Her body pulsed with anticipation, anxious to have
him inside of her. But suddenly she realized what they were about
to do.

Breathing hard, she snatched her mouth
from his. “Wait.” She wiggled beneath him. “I have to tell you
something.” He stiffened in her hold. A shiver scurried down her
spine as his piercing eyes searched hers. “We need to
talk.”

“
Now?” he croaked, his eyes
narrowed and his breath came in short spurts.

Luke released a frustrated groan and
lowered his head to her shoulder. Dropping his hands from her body,
he grabbed hold of the back of the chair, locking her between his
arms. He breathed in and out several times before slowly lifting
his head.