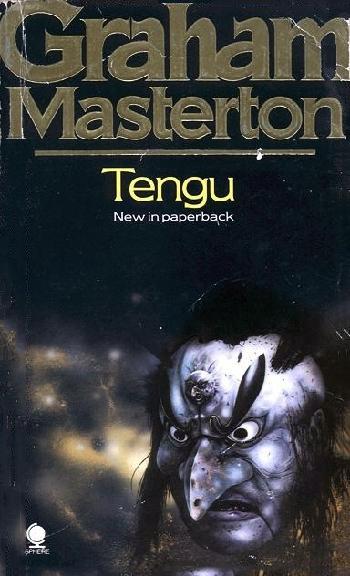 Nancy spoke: “The most evil of all the seven Black Kami is called the
Tengu. Even the most experienced adepts at the Shinto shrine are warned opening
themselves up to the Tengu. It is said that the leader of the shrine had once
done so, and had almost been driven mad.”

“No. You must listen to me. The characteristics the Tengu gave to those
he possessed included invincible physical strength, the mad strength of the
berserk, the ability to stand up to ferocious attack from any kind of weapon.
Also, if the person he was possessing was chopped into the tiniest pieces, the
pieces would regenerate and grow again into demons even more hideous than the
original...”

“No!” she hissed. “You have to listen because it’s true! They’ve done
it! They’ve brought it here, the Tengu, the real Tengu demon!
The devil of remorseless destruction!”

FROM: THE SECRETARY OF
THE NAVY

October 17,
Naval
records show indisputably
that the radio monitoring vessel USS Value was at Pearl Harbor on July 2, 1945,
undergoing routine equipment repairs. There can be no basis whatever for your
suggestion that the vessel was anchored at that time
off
the coast of Japan. Nor can there be any substance in your claim that the USS
Value was connected with what you call the “Appomattox Situation.” The Navy has
no record of any file of that title or description.

EXCERPT FROM THE RECORD OF THE CONGRESSIONAL
INQUIRY INTO INTELLIGENCE PROCEDURES, MARCH, 1961.

SEN. NEILSEN (N.J.): Did you at any time prior to this sortie
appreciate that you might have to sacrifice the lives of all but one of your
fellow operatives in order to achieve a comparatively minor intelligence coup?

LT. COL. KASTNER: Yes, sir. I was conscious of the risks. I might add
that my fellow operatives were, too. We were trained.

SEN. NEILSEN: Do you now believe that what you achieved was worth the
loss of all those lives, and worth the political risks which Senator Goldfarb
has already outlined?

LT. COL. KASTNER: There was a possibility that it might have been, sir.
I admit the net result was a disappointment.

LT.
col
. KASTNER: Not all such sorties are
disappointments, sir. Appomattox was a good example.

LT. COL. KASTNER: I have just been given instructions that I am not to
respond to that question, sir. It is outside the area of my competence.

SEN. NEILSEN: I think this inquiry deserves some kind of explanation of
your remarks, Colonel.

LT. COL. KASTNER: I’m sorry, sir. I have been advised that any kind of
response would be a violation of national security.

SEN. NEILSEN: Very well, Colonel. But I intend to take this matter
further.

LT. COL. KASTNER: That is your privilege, sir.

MESSAGE
RECEIVED FROM APPOMATTOX ONE, JULY 11, 1945

“We’ve located it, sir. No question about it. We’ve taken sixteen radio
bearings and we have it right on the button.”

BOOK ONE BURNED DOVES
CHAPTER ONE

W
hen Sherry Cantor’s alarm clock woke her at 7:27 on the morning of
August 9 she had twenty-three minutes to live.

That was the
most overwhelming fact of her morning. Yet it was the only fact she didn’t
know.

She knew that
her twenty-second birthday was only three days away. She knew that in two weeks
she was supposed to drive down to San Diego and spend a week with her brother
Manny and his wife Ruth. She knew that she had a date to meet her good-looking
new lawyer, Bert Dentz, in thirteen hours and thirty-three minutes for dinner
at the Palm Restaurant on Santa Monica Boulevard.

She knew that
her savings account at Security Pacific contained $127,053.62, and she knew
that last Wednesday’s Variety had dubbed her “most promising young video star
of 1983.”

After the alarm
had woken her up, she lay on her emerald-green satin sheets in her small white
California-rococo bedroom, under the framed black-and-white print of yuccas at
Santa Barbara.

She thought
about the dream she had just been dreaming. It had been vivid, almost realer
than real, as only early-morning dreams can be. She had imagined herself
jumping rope in the front yard of the old white house in Bloomington, Indiana.
She had 14 imagined the leaves falling from the trees like flakes of rust. She
had imagined her mother coming to the door, and waving her to come in for
cookies and milk....

Sherry thought
about her dream, and then let it warmly melt away. Bloomington, Indiana, was
five years ago, and a lifetime away. She stretched on the twisted sheets.

She was a tall,
striking girl with rich chestnut hair and a face that was uncompromisingly
European. Her eyes were wide, and almost amber. She was wide-shouldered,
big-breasted, and narrow-hipped. She slept naked, except for a small pair of
blue satin panties, and her skin was soft and brown against the shiny sheets.

There was a
faded photograph on the sideboard in Bloomington of Sherry’s mother in a
transit camp in Munchen Gladbach, Germany, in 1945. Except for the puff-sleeved
dress and the headscarf, it could have been Sherry.

At 7:31, with
only nineteen minutes left, Sherry sat up in bed and ran her hands through her
tousled hair. On the bleached calico window blind, the first nodding patterns
of sunlight shone through the fan palms in her garden, and made a shadow-play.

Somewhere
outside, a radio was giving the morning traffic report. It was bad everywhere.

Sherry climbed
out of bed, stood up, stretched, and stifled a yawn. Then she padded out of the
bedroom and into her kitchenette. She opened the mock Oregon-oak cupboard and
took down a can of Folger’s coffee. As she reached for her percolator, a triangle
of sunlight lit her hair, and then her shoulder, and then her right breast. The
nipple was pale and soft.

While the
coffee perked. Sherry poured herself an orange-juice and stood in the
kitchenette drinking it. She felt hungry. Last night, she’d shared a bottle of
tequila with Dan Mayhew, the curly-haired actor who played her unhappily
married cousin in Our Family Jones, and hangovers always made her feel hungry.

She opened the
fridge again. There were two Thomas’s muffins left. She wondered how guilty she
would feel if she toasted one.

It was 7:37.
She decided against the muffin. Dan May-hew hadn’t even been worth getting a
hangover over, and so he certainly wasn’t worth putting on weight over. Last
week she’d seen him sitting in the studio commissary with a boy whose pale
lemon ballet shoes and surfer’s knobs hadn’t exactly reassured her about Dan’s
essential virility.

It was 7:39-
There were eleven minutes of life left. Sherry left the kitchenette as the
coffee began to perk, and walked into her small bathroom. There were T-shirts
and panties hanging to dry on a line over the tub. She looked at herself in the
mirror, pouted at
herself
, and pulled down her eyelids
to make sure her eyes weren’t too bloodshot. Lionel–Lionel Schultz, the
director of Our Family Jones–always went crazy if anyone arrived on the floor
with reddened eyes.

‘‘What do you
think we’re shooting here?” he invariably screamed.
“A
fucking Dracula picture?”

Lionel Schultz
wasn’t a gentle man. He wasn’t much of a gentleman, either. But he had a
perverse genius for soap opera, and for provoking believable performances out
of inexperienced actors.

It was Lionel
Schultz who had shown Sherry how to develop the dumb, busty part of Lindsay
Jones into a character of sweet and quirky sympathy. And he hadn’t touched her
once.

Sherry finished
her orange juice and set her glass down on the basin, next to her cake of
herbal soap. She stepped out of her panties, and sat on the toilet. She could
hear the birds chittering in the garden, and the distant murmur of the
freeways. She closed her eyes, and tried to think what she felt like wearing
today.

It was 7:42.
She flushed the toilet, washed her face, and walked back into the kitchenette
naked.

The coffee was
popping and jumping. She picked up the folded-back script that lay on the
counter, next to the Popeye cookie jar, and flicked through two or three pages.
Tengu LINDSAY (sobbing): Is that really what you think of me?
After all those days and nights together?
After all those
things you said?

MARK: Honey,
you don’t understand. I had to tell Carla we were finished. I didn’t have any
other choice.

Riboyne Skel O’/em, thought Sherry.
If anyope had shown me
this script before I signed up for Our Family Jones, I wouldn’t have thought it
was worth turning up at the studio. I would have stayed as a waitress at
Butterfield’s, fetching and carrying white wine and cottage cheese salads for
pretentious British tax exiles in tinted glasses, and been glad of the work.
Who would have guessed that some treacly saga about some even more treacly
family would have gotten off the ground for a pilot and two episodes, let alone
for two series?

Even more
amazing, who would have thought that a Jewish girl from Bloomington, Indiana,
would have been picked out of hundreds of would-be starlets for one of the most
noticeable roles in the whole drama?

There wasn’t
any question that Our Family Jones had cost Sherry the love of her live-in
boyfriend, Mack Holt. Mack was lean and moody, with curly blond hair and a
broken nose, and he could swim and ride and fence and dance like Fred Astaire.
They had met one evening on the plaza outside of the Security Pacific Bank at
Century City, when she had just opened her savings account with $10 her mother
had sent her. The shadows of the dying day had been very Bauhaus, and he had
crossed the plaza at that trotting pace athletes use when they’re just on the
point of breaking into a run. She had been putting away her bankbook; dropped
her purse; and he had picked it up for her in one fell swoop. After such a
meeting, he should have known she would make it in soap opera.

Sherry and Mack
had lived for seven months on the second floor of a brown crumbling hacienda
off Franklin Avenue, in Hollywood. They had shared their three-room apartment
with a lumpy divan, two fraying basketwork chairs,
three
peeling posters for the Grateful Dead, and a dyspeptic gas stove. They had
talked, played records, made love, smoked Mexican grass, argued, gone off to
work, brushed their teeth, and finally arrived at the moment when Lionel had
called to say Sherry was fabulous, and just had to come down to the studio
right away, and Mack, far more talented, but still parking cars for a living,
had refused to kiss her and wish her luck.

From then on,
it had been nothing but sulks, arguments, and eventually, packed suitcases.
Sherry had lived for a while with a plain but friendly girl she knew from
Butterfield’s, and then taken out a mortgage on this small secluded bungalow at
the top of a steeply graded dead end called Orchid Place. She enjoyed the
luxury of living alone, with her own small garden, her own wrought-iron fence,
her own living room, her own perfect peace. She began to think about who she
was, and what she wanted out of her life, and all of her friends said she was
much nicer since she’d left Mack, and much more relaxed.

Jango by William Nicholson
Escaping Me by Cat Mason
The Death Dealer by Heather Graham
Sunday Morning: A Damaged Novella by Bijou Hunter
With His Protection (For His Pleasure, Book 15) by Favor, Kelly
Tutor Me by Hope Stillwater
Flaming Hearts (Beyond Reality Book 2) by Stoker, Susan
Forever Love on Fireweed Island (Island County Book 4) by Karice Bolton
Amanecer by Octavia Butler
Nothing Changes Until You Do: A Guide to Self-Compassion and Getting Out of Your Own Way by Mike Robbins