Read The Art of Holding On and Letting Go Online

The Art of Holding On and Letting Go 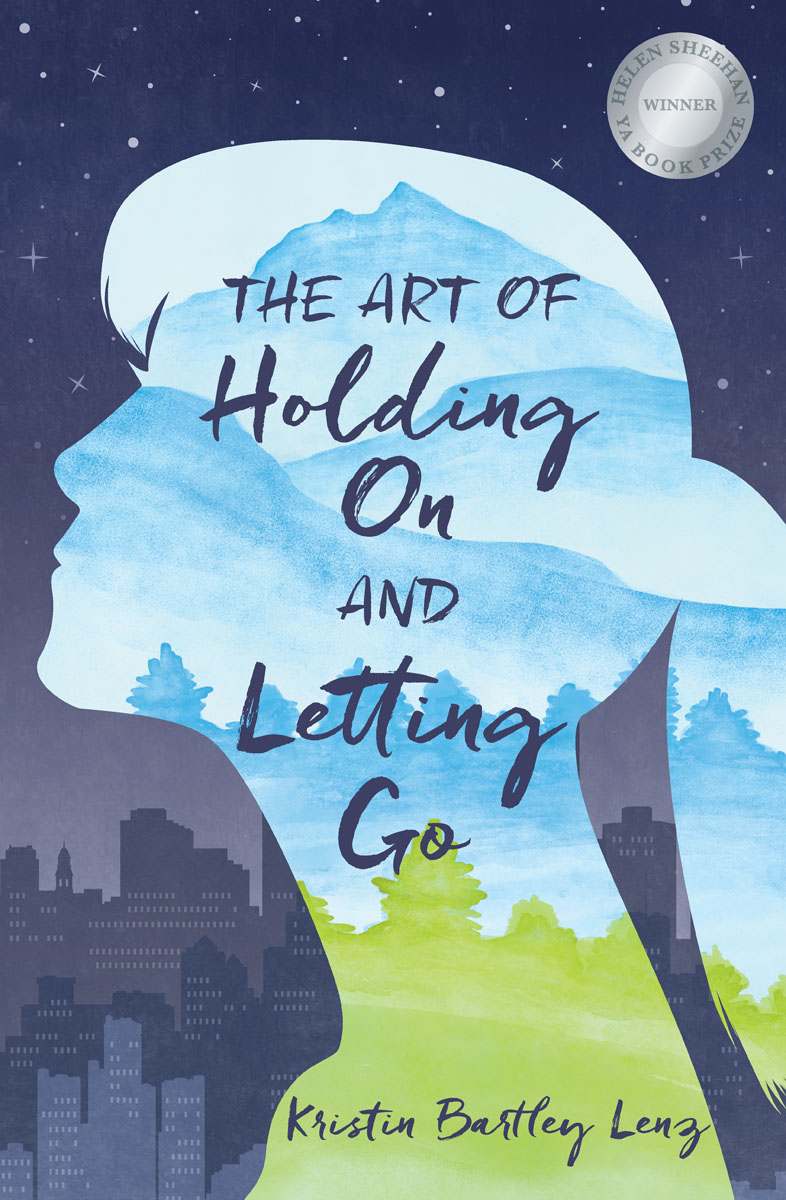 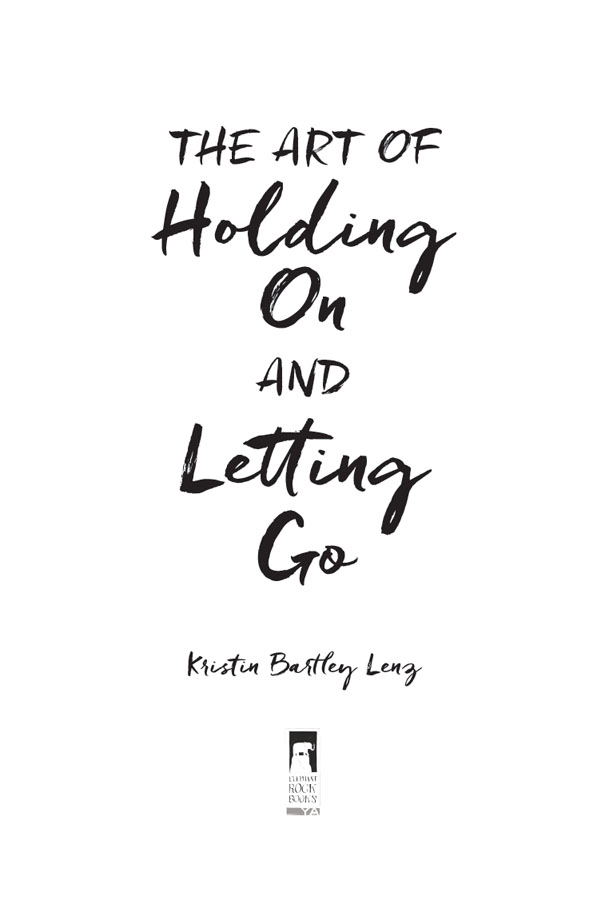 Winner of the 2016 Helen Sheehan YA Book Prize

This is a work of fiction. Names, characters, places, and incidents are either a product of the author's imagination or are used fictitiously, and any resemblance to actual persons, living or dead, events, or locales is entirely coincidental.

For information about permission to reproduce sections from this book, contact Permissions at
[email protected]
. Elephant Rock Books are distributed by Small Press United, a division of Independent Publishers Group.

Mountains are giant, restful, absorbent. You can heave your spirit into a mountain and the mountain will keep it, folded, and not throw it back as some creeks will. The creeks are the world with all its stimulus and beauty; I live there. But the mountains are home.

I want to stand as close to the edge as I can without going over. Out on the edge you see all the kinds of things you can't see from the center.

The waiting was the worst. I gripped my worry stone from Uncle Max, turning it around and around in my hands. My fingers probed its golden grooves and contours. The sharp edges shimmered.

My teammate Becky sat next to me in the isolation tent examining her red, white, and blueâpainted nails. It was the second day of qualifying rounds, and we'd been waiting two hours for our turns to climb. Tiny stars dotted her thumbs. I didn't understand why she botheredâthe polish always chipped by the time she finished her climb.

My own nails were cut as short as possible, my fingers rough and calloused. A crosshatch of red lines spread across the back of my right hand where I had wedged it into a crack last week, the rock scraping my skin. I couldn't tell yet if it would leave a scar like the other white marks on my hands, the crooked gash on my thumb, my pitted palm.

“Ugh,” Becky said. “I want my phone. Seriously, I'm, like, twitching. Look.” She pointed to her eye.

“Maybe you got mascara in it.” Her lashes were so clumped and coated, they looked fake.

She'd scrolled through her phone at breakfast, tilting it toward me so I could see the picture of her hand placed over her heart like she was reciting the Pledge of Allegiance. She'd managed to display our USA team logo, her cleavage, and her patriotic nails all in one close-up shot. Four hundred likes.

No phones allowed in the tent, and no checking out the routes before we climbed; the canvas walls blocked our view of the competition area. A collective groan came from the bleachers outside. Someone had fallen.

“Another one bites the dust.” I tumbled the stone faster and faster in my hands. I swear I could feel its heat, its fire.

“It's pyrite. Fool's gold,” Uncle Max had said. “Named after fire. It'll spark if you strike it against steel, so they say. Want to try?”

For the rest of the day, we struck it against anything metal we came acrossâtent poles, car rimsâstartling ourselves and giggling every time we saw the tiniest spark.

Becky nudged me with her elbow and nodded toward our teammate Zach. “Sleeping Beauty.”

Zach was sprawled on his back, shirtless, his blue-and-white team tank top wadded under his head as a pillow. His eyes were closed, ear buds in. Zach always spent his isolation time listening to music on his iPod and snoozing.

“He climbs right before you,” I said to Becky. “Make sure he's up after I leave.”

“Oh, I will.” Her slight southern drawl stretched out the word
will
, her lips curving into a sly grin.

I knew exactly how she'd wake him up, leaning in close so he'd open his eyes to her boobs in front of his face. I didn't understand how Becky could be so strong yet look so soft and curvy at the same time. I was all bone and muscle. My own chest looked like Zack'sâtwo nipples sticking out of rippling, hard pecs.

A burst of laughter erupted from the other side of the tent. The French team lounged in a clump, girls and guys draped all over each other. They held hands, rested heads in laps, massaged each other's feet.

Becky had been eyeing them all morning. She rolled her eyes and laughed with me, but I knew she'd rather be hanging with them. In their cozy company, she'd have an excuse to hang all over Zach.

Becky sighed. “You're lucky your parents aren't here. Mine will be whistling and waving as soon as my name is announced. They make me so freaking nervous.”

I glanced at the large digital clock over the tent's door. My name would be called soon. I set the chunk of pyrite next to my backpack and picked up my thermos of peppermint tea.

“Just don't look at them before you climb,” I said.

I sipped my lukewarm tea. The crowd made me nervous, not my parents. Knowing they were in the audience usually calmed me, but there was something freeing about being here by myself this time, as a serious competitor, not as the daughter of top mountaineers Mark and Lori Jenkins.

“At least your parents have a life,” Becky said. “My mom would never leave me alone in a foreign country.”

Mom hadn't been comfortable leaving me. We'd debated our plan for weeks, but in the end, I had insisted. Mom should go on the Chimborazo expedition with Dad and Uncle Max.

I shrugged. “They'll be back by the finals.”

“What if you don't make it to finals?”

I arched an eyebrow at her.
I
would make it to finals.

A competition volunteer appeared at the tent entrance and motioned for me to follow. I handed Becky my thermos of tea and tugged on my well-worn, broken-in shoes. As long as the rubber soles were still grippy, I wasn't giving them up. Becky was still trying to decide which of the three shiny new pairs she'd brought looked best with her outfit.

I shook out my hands and cracked my knuckles. I rose up on my tiptoes and bounced. Up, down, up, down.

I nudged Zack's ribs with my toe on my way out, and he opened one eye.

“Send it!” he called out as I left the tent. I gave a thumbs-up without looking back and entered the competition area.

I squinted in the bright sunlight and slowly let my eyes adjust. The bleachers were a sea of color: parents and fans and climbers. The World Youth Championships banners covered the fencing that enclosed the outdoor venue. A gust of wind rippled the flags of all the countries. Russia, Australia, China, Mexico, Canada.

The crowd buzzed, a nest of bees, murmuring and shifting; I didn't look. Someone hooted. Another whistled. I took a deep breath, twinkled my fingers, and scanned the route. Sixty vertical feet of soaring artificial walls with exposed overhangs. I tied the rope to my harness and dipped my hands in my chalk bag. A puff of white dust floated in the air as I rubbed my palms together.

I nodded at the belayer. “Climbing.”

“Climb on,” he said with a Spanish accent. His face was neutral, all business, and made me long for a brief look of reassurance from my parents.

I reached for the first handhold and let everything else fade behind me. Steady breath, reach, grasp, pull, push, pivot, twist. My fingers wrapped around a doorknob bulge, pinched another shaped like a duck's bill. I slid my hands along a large diamond-shaped protrusion. The sandpapery surface scraped my calloused fingertips. My forearms quivered. My bruised toes jammed at the front of my climbing shoes, supporting my weight.

One handhold left, a tiny crimper. I balanced on the tip of my big toe, stretched, and inched myself up with the last bit of strength in my muscles. I teetered. I locked my eyes on the grooved nugget above my head. Breathe. My hand trembled as I reached upward, the nugget like the pyrite I had tumbled in my hands earlier. Come on, Cara, you know how to do this.

A final surge of energy erupted from my core, and I grasped the hold with two iron-claw fingers. Yes! I clipped the bolt, threw my head back, and grinned at the sky. My heart pounded all the way up to my ears. Over the top of the climbing wall, I searched the hazy distance for the snowcapped peaks of the Cordillera Occidental, the Avenue of Volcanoes. Yesterday, the mountains had been clearly visible, grand domes and jagged peaks against a backdrop of blue sky. But this morning, the Andes wore a mask of clouds. My parents were out there with Uncle Max, high on Mount Chimborazo.

The breeze swept across my face, ruffling my bangs and cooling the sweat on my forehead. I closed my eyes and sent a wish to my family, imagining my words traveling with the wind. They'd left four days ago. If all went as planned, they had reached the summit near dawn and were descending at this very moment.

The belayer lowered me back to the ground, and I untied from the rope with shaky hands. Heat pulsed through my body, from my blood to my muscles to my skin. I sneaked a sideways glance at the crowd of clapping, cheering spectators.

I never knew quite how to act when I finished a route. Usually, my gaze would connect with my parents. Mom's face would look relieved, and Dad would send signals with his expression, a nod or shake of his head, analyzing my performance. Uncle Max would cross his eyes or make some sort of goofy face, making me smile, releasing the tension. I'd really need them in two days, when I competed for my world ranking.

I spotted Coach Mel and my teammates who had climbed earlier. I grinned and waved, and left the stage to join them.

I was done climbing for the day, but I still felt jumpy. I always felt nervous for the other competitors, almost like I was climbing up there with them, and now it was Becky's turn. Just like she had said, her eyes swept over the crowd and her parents stood up, hollering and waving. Her dad held a camera with a huge lens, and her mom shook a glittery red, white, and blue pom-pom. She probably had patriotically painted nails too.

I tipped my head and squinted at Becky as she climbed. Something was off. She excelled at speed, much more than I, and she took risks, launching and leaping. It was her strength, but also her downfall; sometimes she miscalculated. She'd quickly launched over the first overhang, but now she kept pausing in position. Beautiful positions, her form was great, but she was going to burn herself out before she reached the top. At this rate, she wasn't going to make it over the crux.

“What is she doing?” Coach Mel muttered.

“Do you think she hurt herself?” I asked.

Coach Mel shook her head, her eyes still on the wall.

I knew exactly where Becky was going to have trouble, I could see the spot coming up. She didn't have enough momentum.