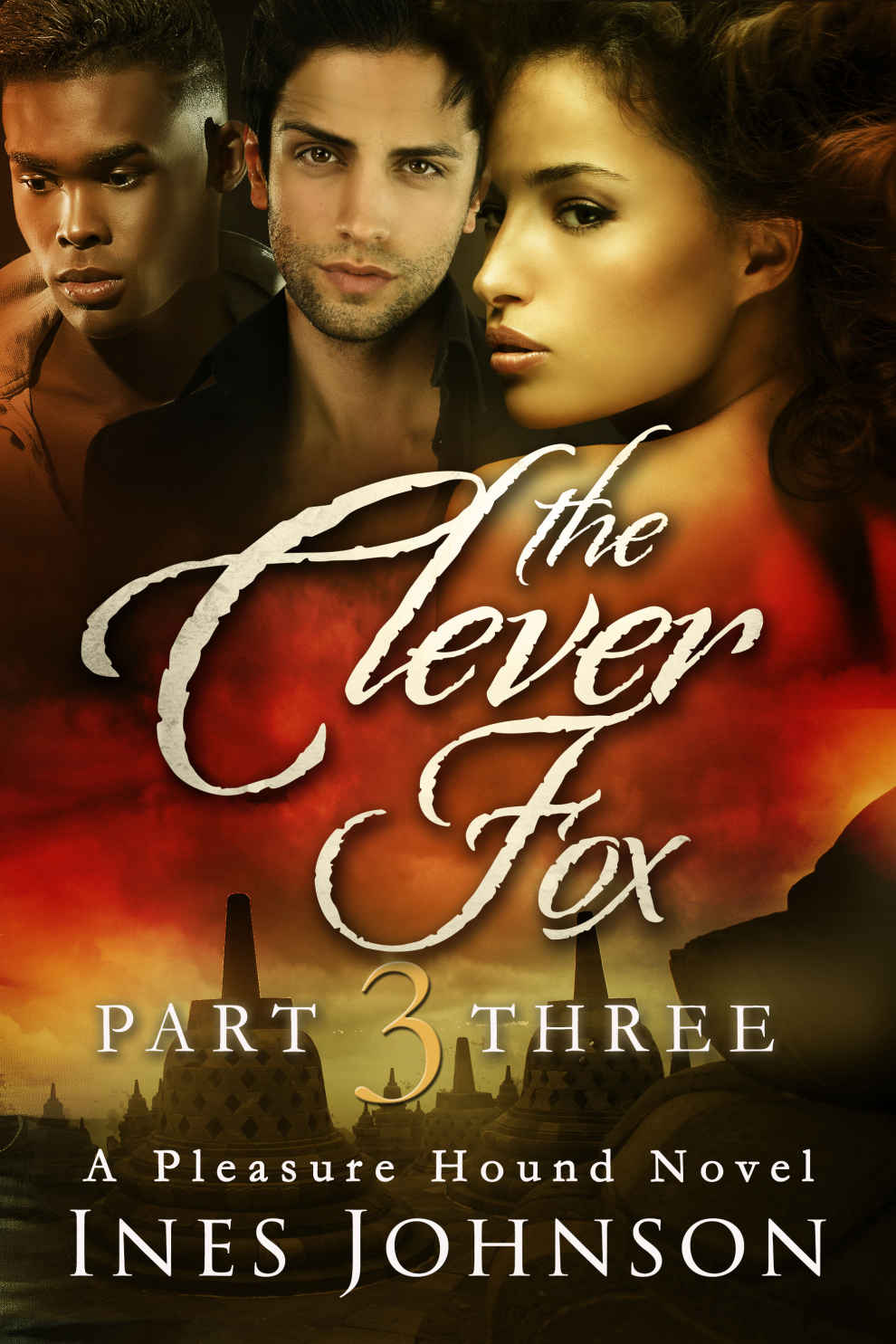 Stay tuned at the end of the book for a glimpse at the next book by Ines Johnson!

This is a work of fiction. Names, characters, places, and incidents are the product of the author's imagination or are used fictitiously, and any resemblance to actual persons, living or dead, business establishments, events, or locales is entirely coincidental.

All rights reserved. No part of this book may be reproduced, stored in a retrieval system, or transmitted in any form, or by any means, electronic, mechanical, photocopying, recording, or otherwise, without prior permission of the author.

Alyss pressed her thighs together. A dull throb thrummed deep within her core. It wasn’t unpleasant. She felt both filled and empty at the same time. Her inner muscles clenched as she stretched her limbs into wakefulness.

She reached out to her right and then to her left, coming up with air. She frowned and opened her eyes. She found neither Adom nor Emet in the bed with her. She supposed she may have assumed too much to expect the men to spend the night with her. They were married after all. They were likely in their own bed. She was a guest here in their home. A guest in their bond.

Alyss sat up and looked around the room, her new room. She supposed at some time during the night Adom untied her and carried her in. She swung her legs over the bed. There was an ache in her calves, her thighs. But the ache wasn’t pain, not too much anyway. Her shoulders and forearms ached too. Remembering the reason for the tenderness brought a smile to Alyss’ lips. She remembered the waves of pleasure that wracked her body the previous night. She’d held on to the ropes for dear life as Adom made her sail into unconsciousness.

She ran her fingers over the faint patterns the ropes left on her wrists and forearms. She remembered nothing past Adom thrusting into her and her entire world exploding. She ached to see Adom’s face, Emet’s too. Now that they shared a home, maybe they’d share her.

Alyss heated at the thought. Only a week ago she’d been repulsed at the idea of one man touching her. She’d been scandalized that her sister enjoyed the touch of both of her bondmates in tandem. Now, Alyss ached for Emet’s lips on hers while Adom held her wrists captive.

She inhaled to release the thought and moved in front of a gilded mirror attached to a stately chest of drawers. An ornate brush set rested on the surface of the bureau. The gems in the brush alone appeared enough to feed a small army of discards for a month. Past her reflection in the mirror, Alyss caught sight of a high back chair made of mahogany. The Mahogany tree had gone extinct over a century ago. She turned and surveyed more of the fixtures. Everything in the room was ornate or ancient. Never good at math, Alyss couldn’t calculate the exact sum in her head, but she knew it was all expensive. More expensive than she thought a painter and a male advocate could afford.

Perhaps Adom made the pieces with his own hands. Perhaps he’d made the bookshelf too. It too was made of mahogany. She tilted her head as she looked at the intricate details. She didn’t remember seeing any raw materials of the ancient wood lying around in the studio. She’d never seen any in any stores.

Alyss spied a dress on a chair. It was not one of her own. She had to assume Adom had made it though it wasn’t his style. It was rather plain, but it was clean. She went into the bathroom, washed up, and then pulled the dress over her head. The sleeves came down to her wrists. Alyss pushed them up past her elbow to show off the marks on her arms. She felt like her body was a canvas come to life. She wanted to display herself for all to see the beauty she and Adom had created together.

Alyss opened the door to her room and gasped. She stepped out into a hall with expensive carpet and large windows that told her she was on the second floor of a house. Adom and Emet’s storefront was a single story with a basement.

Alyss startled at the sound of the unfamiliar voice. She turned to find a tall male with deeply tanned skin and slanted eyes coming her way. He bowed his bald head as he approached. It was the bow that made her remember.

It was her cousin, Chanyn’s, bond mate.

Alyss looked at her surroundings again. She’d been in Chanyn’s house twice before, but never up the stairs. Looking out of the window, she recognized the surroundings as Chanyn’s gardens.

“Emet and Adom brought you here…to rest.” He looked at her bare arms, concern etched in his brows.

Alyss felt the need to cover her arms from his perusal. The glint in his eyes didn’t look like admiration. It looked like an admonishment.

“Are they here?” She walked past Jian.

His one word halted her steps. This didn’t make any sense.

“They brought me here and then…” She waited for Jian to fill in the blank because she could not fathom why Emet and Adom would bring her here after all that happened the previous day.

“My lady.” Jian’s voice was soft, so soft. But she heard the steel in it telling her he would not let her pass. “They’ve let your sister know that you are here. She’ll be by to collect you soon.”

“My sister? Why would she come to collect me?”

“I’m staying with Adom and Emet. Adom needs me…for his paintings. I’m his muse, you see. And Emet…”

Alyss stopped talking. She wasn’t about to share what transpired between herself and Emet, nor herself and Adom. But somehow she thought Jian knew. Jian’s eyes were sad. His jaw clenched. She saw him grinding his teeth as though he were trying to hold his tongue.

What was he not telling her? It couldn’t be that Emet and Adom no longer wanted her. Could it? She’d seen the desire in Emet’s eyes when he asked, practically begged, her to stay. She’d felt it in Adom’s touch, saw it in the lines and colors he painted on the canvas. Without looking down, her fingers traced the markings on her wrist again.

“I don’t understand,” she said.

Jian reached for her, but then stayed his hand before touching her wrist. His eyes lingered there, his lips pursed in censure.

“Lady Merlyn will be here soon. You should choose a different dress. Perhaps one that covers your arms.”

Alyss crossed her arms over her chest, more to protect the artwork on them than to protect herself.

“Where is my daughter!”

Alyss recoiled at the sound of her Mother’s voice. Her eyes whipped to Jian in betrayal. But he wasn’t looking at her. Jian blocked her with his body. She got the impression it was a protective move. Emet must have told him what transpired the other day. But still her Mother spied her from the bottom of the staircase. A harried male servant stood behind her.

Lady Angyla’s eyes swept the scene before her. Her eyes locked on Jian. “You stayed in this house last night? A house full of murderers and sex criminals?”

Alyss moved past Jian. She started down the steps. When she got to the bottom, she held up her hands to her mother to stop her tirade. Her mother’s eyes went wide. She grabbed Alyss’ arm and gaped. Alyss cried out at the pain of her Mother’s grip.

“What have you done to my daughter?” Fury etched lines into Angyla’s eyes.

“He did nothing to me,” Alyss wrenched her arm back.

“Did he tie you up and hold you against your will? I’ll have you arrested, you pervert.”

Arrested? For the ropes? Why would…?

Alyss looked at her Mother. Disgust weighed down her frowning lips. Had she ever seen this woman smile? Had her Mother ever known the pleasure of release? Had she ever trusted another living being enough to give up control?

“It is unlawful for any man to harm a woman in any way. This,” Lady Angyla held up Alyss’ wrists for proof, “is a capital offense, punishable by death.”

A person who’d never felt the pleasure of the ropes on their skin, the release the tension brought, they would see the art as harmful. Her Mother couldn’t see art or pleasure. There was nothing Alyss could say to make her understand. She wrenched her arm out of her Mother’s controlling grasp.

“Mother, Jian never laid a hand on me. I am here of my own free will. Lady Chanyn took me in after you kicked me out.”

“I did no such thing. You have always had a flare for drama.”

“I have a strike against my face, that evidence remains of your offense.” Alyss turned her check so her Mother could see her fading handiwork. “It may not be a capitol offense for a woman to strike another woman, but would you really want the spectacle of it aired out in the public as you go about corralling triads into your clinic for the insemination trials. A Mother who beats her own daughter handling the conception of their child?”

Throughout Alyss’ entire speech, her Mother took steps away from her. A tremor went through the older woman’s hand as though she wished she could strike out once more to silence her daughter. But then a howl of pain erupted down the hall. Jian dashed past them toward the call of distress. Alyss followed in his wake.

They found Chanyn leaning a against a wall. Her body doubled over as she grasped her belly. A puddle of water pooled at her feet.

Jian reached his wife and placed his arms around her. “Lady Merlyn is already on her way, my love.”

“If you want this babe delivered then you need me. You don’t have time to wait. Your water is broken. The babe needs to come out now. I don’t care for you either, niece. But a child’s a child. A female child, anyway.”

They moved Chanyn to one of the ground floor guest bedrooms. Lady Angyla set to work on the delivery. Alyss proved next to useless as she held sterile towels for her Mother. Angyla insisted the males be put out of doors, that they had no place in a birthing room. Both Khial and Jian refused. They took sentry on either side of their wife, holding her hand, whipping her sweat, whispering words of love and encouragement.