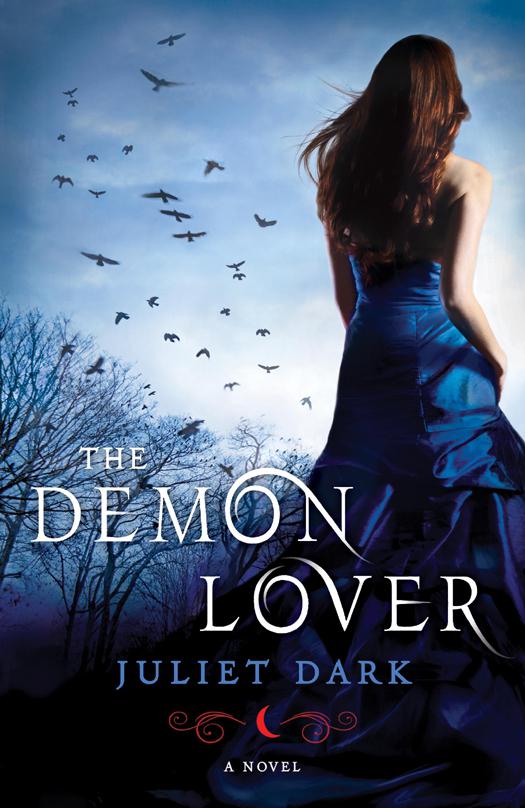 The Demon Lover
is a work of fiction. Names, characters, places, and incidents are the products of the author’s imagination or are used fictitiously. Any resemblance to actual events, locales, or persons, living or dead, is entirely coincidental.

BALLANTINE and colophon are registered trademarks of Random House, Inc.

This book contains an excerpt from the forthcoming book
The Water Witch
by Juliet Dark. This excerpt has been set for this edition only and may not reflect the final content of the forthcoming edition.

Excerpt from
The Water Witch

The housekeeper’s words came back to me as I readied myself for bed. It seemed a strange warning in a house as isolated as Lion’s Keep, where our only neighbors were sea and heath. Had there been trouble with one of the servants
—
perhaps with that impertinent groom with the roving eyes?

Or could it be the Master that Mrs. Eaves was worried about? Haughty, remote William Dougall, who had looked down at me from his horse with such icy condescension
—
a cold look which had paradoxically lit a spit of fire from my toes to the roots of my hair. Surely not. The great William Dougall wouldn’t deign to bother a lowly governess such as myself
.

I locked the door all the same, but left the windows open as it was a warm night, and the breeze coming off the ocean felt deliciously cool as I slid between the crisp lavender-scented sheets. I blew out my candle

…
and immediately noticed something odd. There was a crack of light at the bottom of the door. Had Mrs. Eaves left a candle burning in the hallway for my benefit? If so, I ought to tell her it wasn’t necessary
.

I threw the sheets off and swung my legs over the side of the bed, preparing to go investigate, but froze before my toes touched the floor. The bar of light at the bottom of the door had been split in two by a shadow as if someone were standing there. As I stared at the door, seeking some other explanation, the brass knob silently began to turn. I opened my mouth to scream, but no sound came out. My throat was frozen with fear, as were my limbs, powerless to run from whoever was at the door. All I could do was watch as the knob turned

The door didn’t open. It was locked. The knob paused there as if whoever was turning it was deciding what to do next. Would he break the door down? Would he force his way in and then

But he must have decided that breaking down the door would make too much noise. The knob silently revolved back. The shadow disappeared from beneath the door and the light slowly faded
.

I let out a shaky breath, my limbs reduced to quivering jelly now that the moment of crisis was over. Should I go find Mrs. Eaves and tell her what had happened? But tell her what? That I had seen a light, a shadow, a turning knob? Already I mistrusted the evidence of my own senses and I had no wish to look an hysterical child on my first day of service
.

So I crept back into bed, pulling the sheets over me, but kept my eyes on the door. What if he had gone to retrieve a key? I lay like that, rigid beneath the crisp sheets, all my attention riveted to the door, for I don’t know how long. I was sure I would not sleep, but it had been a long day of weary travel and learning new faces and new duties, and the sound of the waves crashing on the shore below the cliff and the scent of saltwater mingled with honeysuckle from the garden were hypnotically soothing …

I must have drifted off because when I came to, the room was bright with light. I startled awake, thinking the light in the crack below the door had seeped into the room, but then I saw that the light came not from the door, but from the open window. Moonlight spilled in, white as cream, soaking the sheets and my nightgown
—
I was wet, too, from the heat
—
drenching the whole room except for a pillar of shadow that stood at the window …

For the second time that night I opened my mouth to scream, but my throat was as frozen as if the moonlight was a carapace of ice. I could not see the man’s features, but I knew it must be William Dougall. I recognized that arrogant bearing, those broad shoulders, the slim agility of his hips as he moved forward …

He was moving forward, slowly, gliding across the floor so as not to make a sound. He must think I was still asleep. I must let him go on thinking I was asleep. If he knew I was awake he might become violent
.

The Master has his moods,
Mrs. Eaves had said
. Best not to get on the wrong side o’ them.

I clenched my eyes shut. Perhaps he had only come to
look
at me, as he had stared down at me from his mount earlier today. Perhaps I could bear it if he’d only come to look …

I felt a tug on the sheet that lay over me, a minute movement as if the breeze had lifted it, but then it began to slide down, dragging across my breasts, tugging the placket of my nightgown, which I’d left unbuttoned because of the warmth of the night. The cool air tickled my bare skin and to my acute embarrassment I felt my nipples harden beneath the thin cloth. I could
feel
his eyes on me, a prickling sensation that made the hairs on my legs stand up

…
my bare legs! My nightgown had ridden up around my hips in my sleep. Cool air licked at my thighs, my calves, and finally, as the sheet slipped away in a soft swoosh that sounded like running water, my toes. I lay still, barely daring to breathe, alert for the slightest sound or movement. If he touched me I would scream. I’d have to. But nothing happened. The breeze played across my skin, teasing the bare places
—
my breasts, the crook of my arm, the inside of my thigh. At last I couldn’t bear it
—
I risked a peek through slitted eyes

…
and saw nothing. The room was empty
.

Had I imagined the shadow at the window? Perhaps I’d tossed the sheet off myself

…
but then I felt something touch the sole of my foot. A breeze warmer than the outside air, warm and moist as breath. The shadow was still there, at the foot of the bed, crouched by my feet, but whether man or dream I could no longer say. The pull it had on me seemed
otherworldly.
Why else would I lie silent as it breathed on my calf, its breath hot and wet? Why else would I stir only to widen my legs as its breath traveled up my leg? Why else would I close my eyes and give myself over to its rough warmth lapping inch by inch up my thigh? Like a wave lapping at the shore, leaving wet sand as it retreats, and traveling a little farther each time it returns. Insinuating itself into the cracks and crevices, wearing away the stony shore. I felt my own stoniness wear away as the warm tongue found its way into my very center and then licked
deeper
into the depths I didn’t know I had

…
and then the wave dashed me down to the strand
.

I opened my eyes and watched the shadow slip away like a retreating tide, leaving me wet and spent as a woman drowned. I knew at last what had happened to me. I’d been visited not by William Dougall
—
or any other mortal man
—
but by an incubus. The demon lover of myth
.

The Sickness by Alberto Barrera Tyszka
Gone Girl by Gillian Flynn
Bliss by Peter Carey
When We Wake by Karen Healey
Finally a Bride by Vickie Mcdonough
Red Knight Falling by Craig Schaefer
Comanche Woman by Joan Johnston
Wedding on the Baby Ward / Special Care Baby Miracle by Lucy Clark
Strength of the Pack by Kendall McKenna
A Change for the Better? by Drury, Stephanie